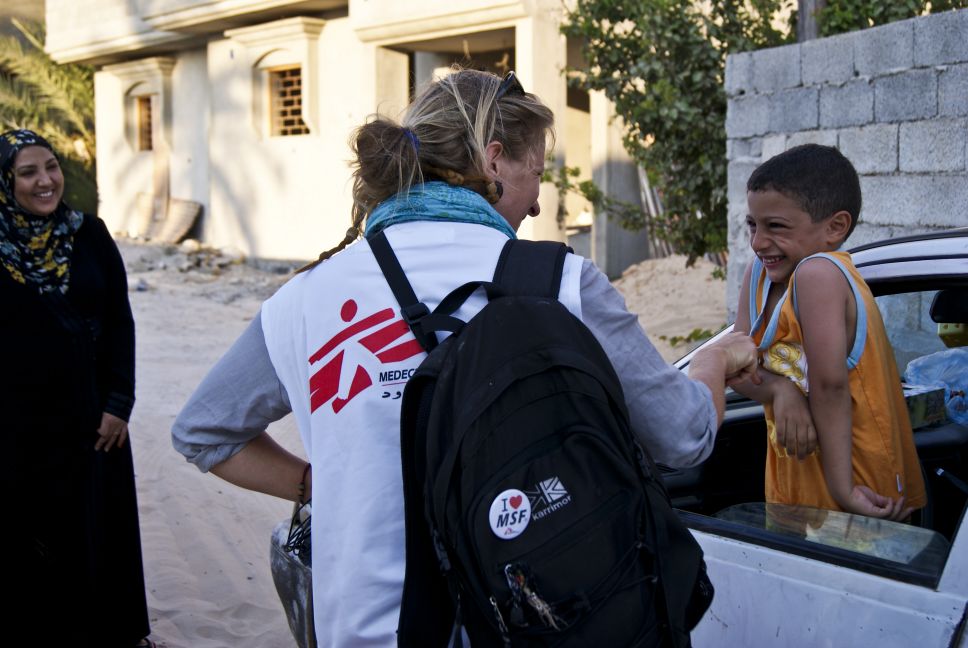 Médecins Sans Frontières MSF (Doctors Without Borders) has helped established a network of 30 local psychologists as part of its medical support projects in the city of Misrata, which has been the scene of fierce fighting for more than four months.

In a country which has not experienced war in over four decades, has few psychiatrists, and where psychology is an often neglected and undervalued aspect of mental health, MSF focused its psychological activities on helping to build and support a network of local psychologists with access to both patients receiving treatment in the city’s main health facilities, as well members of the community outside the medical system.

“Prior to the war, there were only child psychology services in Misrata for treating conditions such as Down's syndrome or autism, nothing else, and even psychiatry wasn’t really being offered effectively,” said MSF psychologist Elias Abi-Aad.  “They had no experience in normal clinical psychology at all, let alone trauma and war-related mental health disorders.”

In addition to providing training in conducting basic therapy and consultations, MSF psychologists shared the psychological treatment tools developed throughout the organisation’s 40-year history of intervening in war contexts.

“Before I met MSF, my knowledge as a psychologist was very basic,” said local psychologist Fatima Alaylech. “I learnt a lot from their trainings, especially how to deal with post-war trauma because we as Libyans never had this experience before and I had never treated these kind of patients.”

Members of the network have been provided with guidance in recognising trauma-related mental health symptoms and establishing clear referral criteria.

MSF conducts regular training sessions and meetings to discuss practical issues like how to conduct a consultation, establish a diagnosis, follow-up treatment and building a relationship, as well as specialised information on addressing disorders relating to the current situation in Misrata.

“We discuss everything – from the patient’s story, to the disorder they are complaining about, common war-related psychological symptoms, establishing plans of action, and setting objectives that both the patient and psychologist want to reach,” said Elias.

Initially, the local community and medical staff were unaccustomed to these sorts of mental health activities. MSF staff spent time to explain the nature of psychological interventions and the need to address issues now to potentially prevent much worse consequences in the future.

Step by step, patients from completely outside the medical system began approaching the network for assistance, as well as overworked local medical staff that were suffering from stress and anxiety.

“We presented the war as an external factor causing problems that were unusual and that the general population was not used to,” Elias said.  “This way, it was easier for people to seek help because they could consider themselves ‘wounded’ and not crazy or having something wrong with them.”

As recognition grew of the growing need for psychological care in the general community, the network gradually found its place within the package of care provided to patients in Misrata.

In addition to referrals from local medical staff, men, women and children are being treated by the network for anxiety, depression, post-traumatic reactions, psychosomatic complaints and behavioral disorders caused by factors such as loss of family members and friends, constant shelling of the city, displacement, significant physical injuries and handicaps, and fear for the future.

“In the last few months, people have started to show psychosomatic symptoms even if they were not injured physically by the war,” said Fatima.  “Those sort of symptoms normally appear five-to-six months after the traumatic experience but we are already starting to see more and more of these sorts of disorders such as depression, anxiety, and various neuroses in children such as bedwetting and aggressive and violent behavior.”

The network’s psychologists are in close contact with Misrata’s pediatric wards and provide information to local pediatricians on identifying mental health issues.

“I once met a mother, who heard me talking to the pediatrician about referral criteria for children, and she came to me and said ‘I think my kid fits some of those criteria’,” Elias said.

“Her child was suffering from acute stomach pain that the doctor could find no physical cause for. We treated the child and it turned out to be psycho-somatic related. He’s doing better now and the pain is gone.”

Since becoming fully established at the beginning of June, the network has treated around 200 patients. MSF plans to continue the programme to consolidate psychological services in Misrata’s health system and expand the treatment offered to the local population.

“Now we have a local partner with clear objectives and strong motivation but lacking in experience, training, work tools, supervision, and most of all, long-term legitimacy within the local population,” Elias explained.

“MSF provides all these things, as well as access to patients within the structures where we work. Our support is crucial to both the expansion and development of the programme and its sustainability.”

MSF has been present in Libya since 25th February and is providing assistance in the cities of Misrata, Benghazi, Zintan, in camps along the Libyan-Tunisian border, and on the Italian islands of Lampedusa and Sicily.

MSF is still trying to access other areas affected by the Libyan conflict, including the city of Tripoli.

To ensure the independence of its medical work, MSF relies solely on private financial donations to fund its activities in Libya and does not accept funding from any government, donor agency, nor from any military or politically affiliated group.