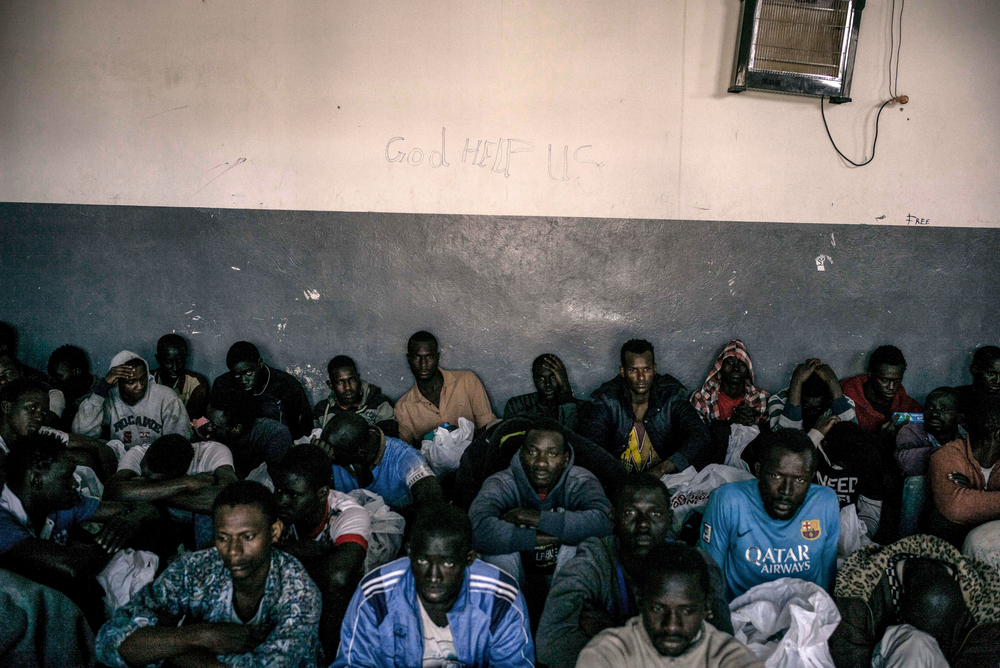 Significant increase in violence since the beginning of 2021

“This is not an easy decision to make, as it means we won’t be present in detention centres where we know people are suffering on a daily basis,” said MSF head of mission in Libya, Beatrice Lau.

“However, the persistent pattern of violent incidents and serious harm to refugees and migrants, as well as the risk to the safety of our staff, has reached a level that we are no longer able to accept. Until the violence stops, and conditions improve, MSF can no longer provide humanitarian and medical care in these facilities.” 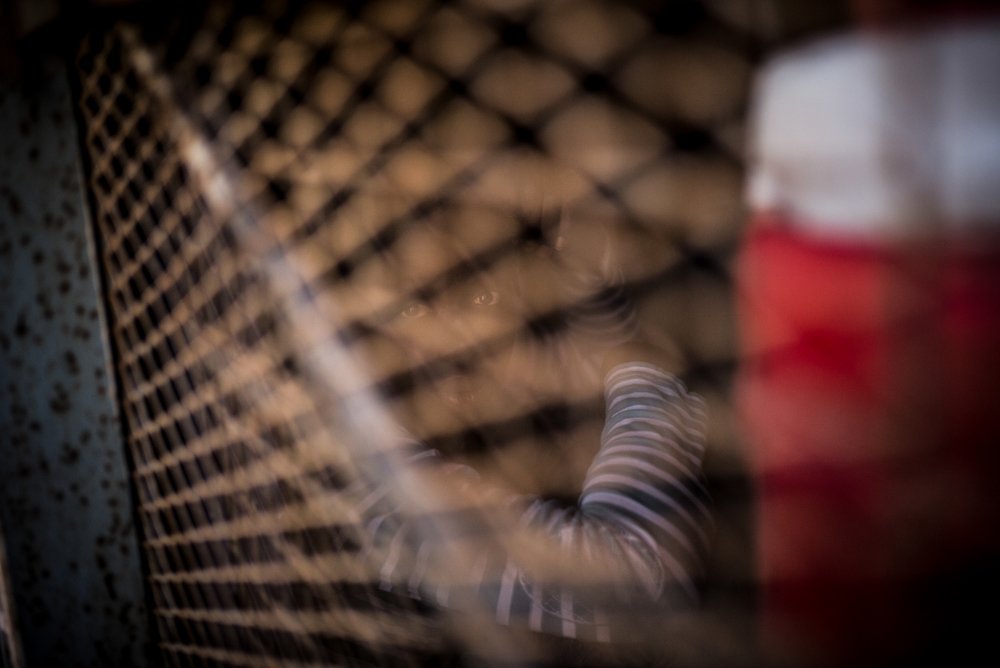 Guillaume Binet/Myop
A man detained in Abu Salim detention centre. Detainees spend days and months in Libyan detention centres, without knowing when they will be released. 2017.

Since February this year, incidents of ill-treatment, physical abuse and violence against people held in these detention centres have increased steadily.

Over the space of just one week, MSF teams witnessed firsthand and received reports of at least three violent incidents resulting in severe physical and psychological harm.

During a visit on 17 June to Mabani “Collection and Return” detention centre, where at least 2,000 people are estimated to be held in severely overcrowded cells, MSF teams witnessed acts of violence carried out by the guards, including the indiscriminate beating of people who attempted to leave their cells to be consulted by our doctors.

The MSF team received reports of heightened tensions the previous night that culminated in mass violence, leaving both migrants and refugees as well as guards with injuries. 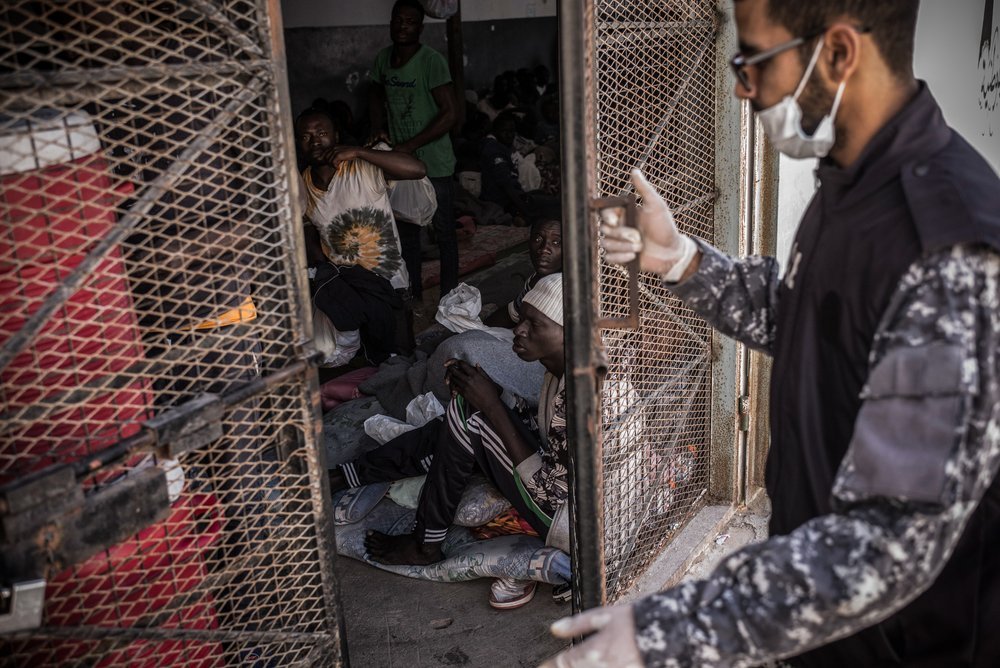 Guillaume Binet/Myop
A guard is closing the door of a cell in Abu Salim detention center, in Tripoli, Libya. 2017.

One unaccompanied child was left unable to walk after suffering serious wounds to the ankles. Others spoke of physical and verbal abuse by guards.

For seven days following the incident, MSF teams were refused access to the detention centre, raising concerns about the repercussions of lack of treatment for those with potentially serious injuries and for the critically-ill.

Coinciding rise in the number of interceptions at sea

The increase in violence since the beginning of 2021, goes together with the simultaneous significant rise in the number of refugees, migrants and asylum-seekers intercepted at sea by the EU-funded Libyan coastguard, forcibly returned to Libya and locked in detention centres.

As of 19 June, over 14,000 people had been intercepted and returned to Libya, exceeding the total number of forced returns for the whole of 2020.

This has resulted in severe overcrowding and a deterioration of the already desperate conditions inside.

"Most detention centres lack ventilation and natural light; some are so overcrowded that up to four people share one square metre of space – forcing people to take shifts to lie down and sleep" 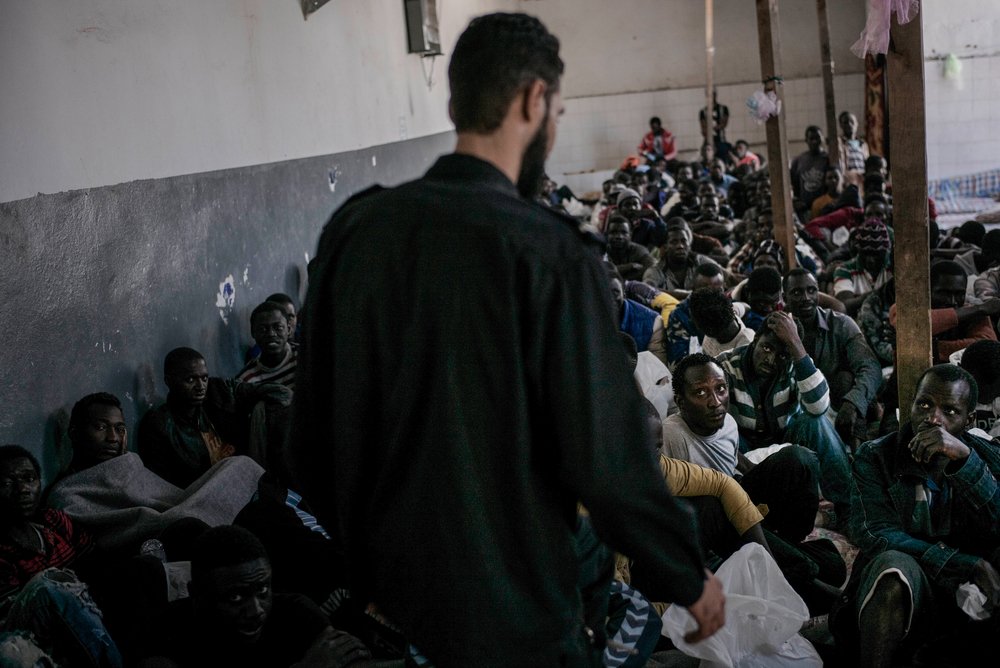 Guillaume Binet/Myop
Men detaineed in Abu Salim detention centre. Detainees spend days and months in Libyan detention centres, without knowing when they will be released. 2017.

Most detention centres lack ventilation and natural light; some are so overcrowded that up to four people share one square metre of space – forcing people to take shifts to lie down and sleep.

Additionally, migrants and refugees receive insufficient food to eat, with just one or two small meals a day, usually a small piece bread with cheese or a plate of macaroni to share amongst many.

MSF doctors observed that with the lack of food, people sometimes use their medication to manage the hunger.

The lack of enough nutritious food has resulted in some women being unable to produce breastmilk to feed their babies.

One woman told MSF teams she was so desperate to feed her five-day-old baby that she tried to give her ration of solid food to her infant so it wouldn’t starve.

In such inhumane conditions, tensions frequently result in eruptions of violence between guards and people arbitrarily detained inside.

Call for an end to arbitrary detention in Libya

MSF calls for an end to the violence and improvement of conditions for refugees and migrants trapped inside Mabani and Abu Salim detentions centres.

MSF also reiterates its call for the end to the longstanding practice of arbitrary detention in Libya, and for the immediate evacuation from Libya of refugees, asylum seekers and migrants exposed to life-threatening risks – including those in detention centres.

“No further people intercepted at sea by EU-funded Libyan coastguard should be forced back to Libya and into detention centres."

"Violence in detention centres must end and all those trapped in these inhumane conditions must be released.”

more on our work in libya >