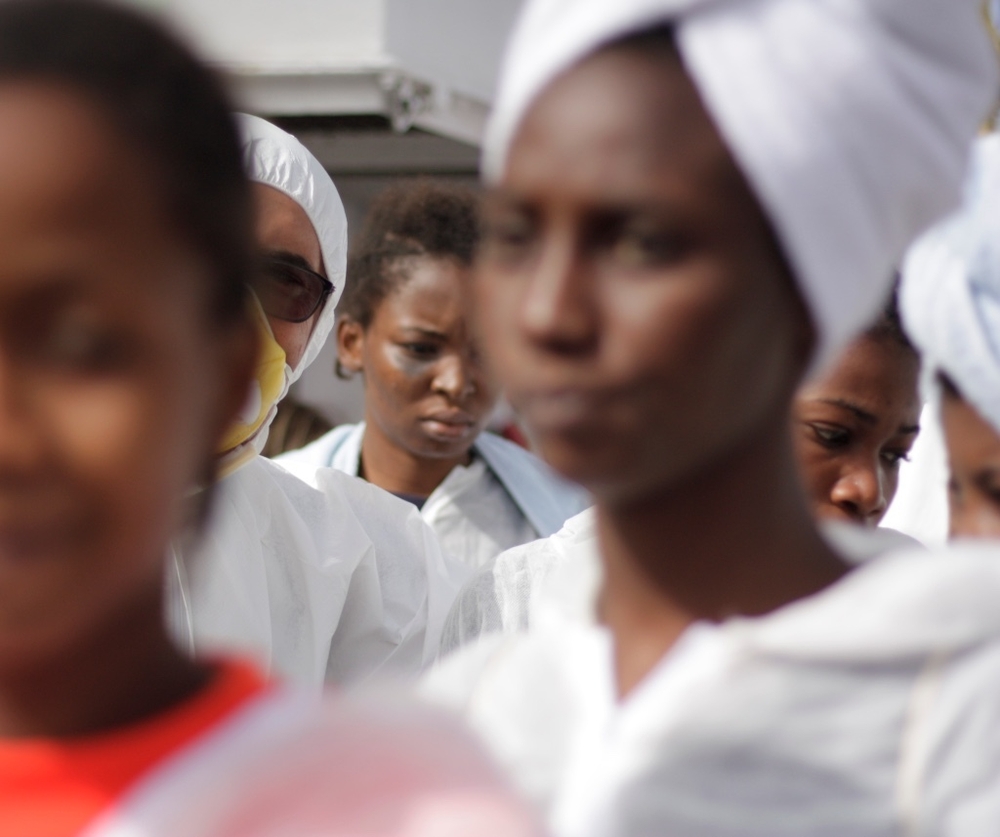 Refugees, migrants and asylum seekers locked up in Libya.

“Libya is a very dangerous place. There are a lot of armed people. People are killed and kidnappings are common. Arriving in Tripoli, we were locked in a house with 600 to 700 other people. We had no water to wash ourselves, we had very little food and we were forced to sleep on top of each other. It was very difficult for my daughter – she fell sick many times. There was a lot of violence. I was beaten with bare hands, with sticks and with guns. If you move, they beat you. If you talk, they beat you. We spent months like that, being beaten every day.” 26-year-old woman from Eritrea, rescued from the sea in August 2015

Anna Surinyach/MSF
The MSF ship Dignity 1 rescued 435 people from three boats in distress on 16 May 2016. Whilst all are physically quite well, they show the scars of the perilious sea journey and awful time in Libya.

Since Médecins Sans Frontières (MSF) launched search and rescue operations in the central Mediterranean Sea last year, its teams have rescued more than 25,000 people from boats in distress. Regardless of their country of origin or their reasons for trying to reach European shores, almost everyone rescued from this stretch of water passed through Libya.

Hundreds of interviews with people rescued at sea by MSF during 2015 and 2016 have exposed the alarming level of violence and exploitation to which refugees, asylum seekers and migrants are subjected in Libya. Many of those we have rescued report having directly experienced violence in the country, while almost all report witnessing extreme violence against refugees and migrants, including beatings, sexual violence and murder.

Libya remains fragmented by conflicts and the effects of the civil war. While government departments are trying hard to restore some sense of normality and increase public services, daily life for many Libyans is still a struggle, and the country does not have the capacity to support tens of thousands of foreigners, migrants and refugees. While fighting between rival armed groups continues, the situation for migrants, asylum seekers and refugees remains as precarious and dangerous as ever.

According to the people interviewed by our teams, men, women and, increasingly, unaccompanied children (some as young as 10 years old) transiting Libya are suffering abuse at the hands of smugglers, armed groups and private individuals who are exploiting the desperation of those fleeing conflict, persecution or poverty. The abuses reported include being subjected to violence (including sexual violence), arbitrary detention in inhumane conditions, torture and other forms of ill-treatment, financial exploitation and forced labour.

Fifty percent of the people interviewed by MSF on its search and rescue boats during 2015 say they were detained for months against their will during their stay in Libya by police and other authorities, by militias involved in the conflict, by criminal gangs operating in the main cities or by private individuals.

Locked up in houses, sheds or other buildings, in dire humanitarian conditions and without access to medical treatment, people told us they were frequently subjected to violence or made to do forced labour.

After their rescue by MSF’s ship in May 2016, one of a group of six women from Eritrea and Somalia told us: “Once we arrived in Libya they put us in a big hangar. We stayed in the hangar for different periods of time – some of us for two weeks and some for four months if they don’t have money. They brought us very little food, just once a day. There was not cleanliness, it was horrible. I can never return to Libya, whatever happens.”

According to many of those interviewed, kidnappings are a common way of extorting money, usually from the hostage’s family and friends in their country of origin, with ransoms often paid via hawala (an informal value transfer system based on a network of international money brokers). Sometimes hostages are able to buy their freedom using their own money – often banknotes sewn into their clothes.

In a practice similar to slavery, many people have described how they were forcibly taken and held for the purpose of forced labour. Shuttled between middlemen and ‘brokers’, locked up at night in detention-style conditions in private homes or warehouses, men are forced to work on construction sites or farms during the day, often for months at a time, until they have paid their way out. Many women report being kept in captivity as domestic servants or forced into prostitution.

Lami, aged 26, from Senegal was living in a half-constructed house with 30 other people. “They obliged us to work and we didn’t get any money. They used us as slaves. It was there that they beat me with an iron stick. I lost a lot of blood, I couldn’t even walk. There was a guy there (…) he was really sick and his condition was getting worse every day. He died in front of my eyes; we had to bury him there. In Libya, if you don’t have money to pay back the people that assault you, then they beat you. I prefer to die at sea.”

Maria,* aged 26, from Cameroon, who was rescued by an MSF ship in June 2016, said: “People sell people. Selling people is normal in Libya.” She said that, after being abducted by four armed men, she was forced into prostitution and raped repeatedly. “They took all our things. Everybody has a gun in Libya – children too (…) I spent three and a half months in Libya, in two different houses. One day a girl died in front of us. She was sick, no food, and no water. If you go to hospital, they kidnap you. My friend is still in prison; she has been there seven months.”

“Someone comes in for a cough and takes off their shirt and you see all the scars from the torture they suffered, and you realise they have broken bones, and they tell you these horrendous stories. I have seen at least 32 patients with clear violence-related injuries during the past 12 rescues.”
Dr Erna Rijnierse, MSF doctor on board the search and rescue boat Aquarius, June 2016

MSF medical teams on board three rescue vessels in the Mediterranean continue to treat and witness the consequences of physical and psychological violence inflicted on people escaping Libya. Although it can be difficult to definitively identify mental trauma in the short period they are present on our boats, the evidence of physical violence is unmistakable, linked to detention, torture and other ill-treatment, including sexual violence.

In the past few months, MSF medics have seen a man with a week-old infected machete wound on his forearm; a young woman who received so many blows to the head that her eardrum was perforated; a man with severe swelling after being beaten in the groin; a man with a broken collarbone and extensive scarring over his back as a result of the lashings he received while in detention; and a man hit repeatedly and so hard with a Kalashnikov that the bones in his hand had shattered.

As well as those with visible injuries, there are the women travelling in a group who stare silently at the horizon, not uttering a word during the rescue or in the days that follow; there are the heavily pregnant women who are travelling alone.

It is clear that the experiences of people transiting Libya or trapped within the country are producing severe psychological effects. According to data collected by MSF over one year in the reception centre of Ragusa, Sicily, 60 percent of the 387 individuals interviewed had mental health needs. As well as experiencing traumatic events in their home countries, 82 percent of the patients directly treated by MSF teams in Sicily reported experiencing traumatic events during their journeys, most frequently detention – and usually in Libya; 42 percent of them were diagnosed with post-traumatic stress disorder (PTSD) and 27 percent with disorders due to anxiety.

Sara Creta/MSF
Ahmad Al Rousan instructs people on a boat in distress off the coast of Libya, 2 June 2016

“First of all, I have to calm them down, to make them understand that nobody will take them back to the hell which they have left. I look them in the eyes; the people look back at us. They are terrified, squashed up against each other in the boat. It is important to state clearly that nobody will be taken back to Libya (…) it is essential to transmit a feeling of safety in order to stabilise the boat.”
Ahmed Al-Rousan, MSF cultural mediator on board the search and rescue boat Bourbon Argos

Refugees, migrants and asylum seekers desperately trying to leave Libya must find their way to the Mediterranean coast, where they face the prospect of a long and dangerous sea crossing. Smugglers’ boats are often small vessels and are almost always overcrowded, putting passengers at risk of dehydration, asphyxiation, fuel burns and drowning. The boats are not seaworthy enough to reach Europe’s shores and, without rescue, passengers face certain death.

Every person seeking asylum should be able to have their claim heard and judged on its merits. Without a functioning asylum system in Libya, people seeking protection cannot be processed in accordance with international and regional refugee law. As Libya is not a party to the 1951 Convention relating to the Status of Refugees, and is itself emerging from a humanitarian crisis, EU countries cannot assume that these rights are granted. EU countries, therefore, should not deny people the chance of reaching Europe.

The accounts of hundreds of survivors, as told to MSF teams, reveal the extent of the suffering endured by people who aim to reach Europe, but who remain invisible and trapped in transit within Libya.
*Names have been changed