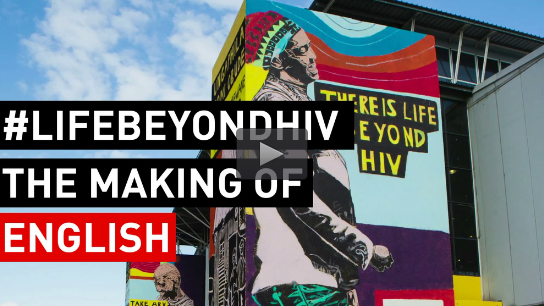 For this year’s World Aids Day, MSF has joined forces with people living with HIV in South Africa, to broadcast far and wide through the township, especially towards young people, that there is life beyond HIV.

Thembisa is playing with her 3-year-old son, Andile, in their shack in a crowded corner of Khayelitsha, a sprawling township near Cape Town, South Africa, where young women are among the highest risk groups for contracting the disease.

Portrait of Thembisa Mbhobho one of the activists featured on the Khayelitsha Mural.

The young mother with laughing eyes first found out she was HIV+ in September 2008, but she refuses to be another statistic.

“HIV kills whoever wants to die,” she says fiercely, before swallowing the little pill that keeps the virus in her bloodstream at bay, ensuring that she stays well enough to care for her son.

But it hasn’t been easy. “Coming from the clinic that day, I felt like everyone could tell I was HIV positive,” says Thembisa. “I didn't know whether or not to cry, but I told myself that I will soldier on. The nurse who spoke to me told me that nothing would happen if I take my treatment and I condomise. Nothing is going to change.”

But while accessing and taking her treatment is quite simple for Thembisa, she has had to confront the stigma that still surrounds the disease in South Africa.

“I was in shock when I came from the clinic, and I think this is made me disclose my status to a friend of my mother’s. Then I went to another friend's house. When I got there, they were talking about HIV, so I told them as well, but they thought I was joking.”

Her mother was very accepting of her status. She didn’t shout at her or cry, but simply told her to be more careful now that she knew she had it.

“Not everyone in Khayelitsha has a problem with people with HIV,” says Thembisa.

“We also go to support groups. But some people are judgmental, of course, and will not want to speak to you or date you because they don't even understand how people get HIV.”

She wants people to know her status, she says, because hiding it doesn't help.

“I volunteered to be on the mural because the youth don’t have much courage like I do. I'm hoping the mural will help young girls to not feel alone once they've found out about their status and they build courage from my bravery. When they see that it's a young woman in the mural, they can find hope that they can still live for many years.”

In Khayelitsha, an overcrowded township near Cape Town, South Africa, 40-year-old Welcome Makhele is known as The Condom Man.

Welcome Makel one of the activists featured on the Khayelitsha Mural.

On a typical day he can be found handing out condoms to passersby on the street corners, or knocking on their doors, and enthusiastically educating them about HIV and its challenges. He was diagnosed HIV positive in 1998, but kept his status a secret from his family for five years.

“Living with HIV is not an easy journey,” he says during a break from his work. “People are judgmental and some will tell you that you would not have contracted the disease if you had used a condom, so you have to accept that you have it, and forgive yourself, before talking to other people.”

In the late 1990s and early 2000s, anti-retroviral treatment was hard to come by if you were a poor, black South African, and the best drugs still had severe side-effects. Perhaps for this reason, Welcome was told that he was going to die.

In 2004, he joined the Treatment Action Campaign, the South African civil society organisation that, along with a number of medical organisations, including MSF, would successfully advocate for the government to provide free ARV treatment to HIV+ people below a certain CD4 threshold.

These days Welcome takes his ARV pill at 7am every day, secure in the knowledge that doing so is prolonging his life.
Despite the free access to ARVs, the stigma and misinformation about the disease has remained high, which is why he finds his work so fulfilling.

“Like many people, I also thought there was no life beyond HIV until I met people who are also HIV positive in a support group and discussed healthy living. Then I told myself to go and challenge the community because the information they have is incorrect. It was not easy, but I told myself that if I could convince one person in a month, I would have done a lot.”

With this being his mission in life, Welcome was the perfect model to be portrayed in the giant mural on the side of O.R. Tambo Hall in Khayelitsha.

“For five years I was in denial and I don’t want people to follow that route,” he says.

“I jumped at the opportunity to be in the mural, because I know that it might change the lives of people in my community. If you put a message on a wall, and people keep on passing there, eventually it will get into their heads, and change their behaviour.”

Find out more about MSF's response to HIV