On 25 August 2017, Myanmar's military and local militias launched a wave of "clearance operations" in response to attacks by the Arakan Rohingya Salvation Army in Rakhine state that turned into widespread violence against civilians. Since then, more than 647,000 members of the Rohingya community have fled Myanmar to Bangladesh. MSF surveys conducted in refugee settlement camps in Bangladesh estimate that at least 6,700 Rohingya were killed during those attacks, including 730 children.

For Mohammad, a member of the Rohingya community, life had always been hard. But on the morning of August 25, it became hell.

“I was at the mosque for dawn prayers. It was a quiet Friday morning at around 5:30 am when we heard men marching into our village,” said Mohammad, a schoolteacher who is now living with his pregnant wife as a refugee in grim conditions in Bangladesh.

The men, he says, started firing machine guns and hurling grenades on houses and farms.

“It was the army and the border guards who were attacking my village. I saw their uniforms,” he says.

Panic erupted in his village, located in Northern MG Daw.

“Everyone was running in all directions, no one knew what to do. Should I flee the village? Should I go home to check on my family? It felt like my brain was on fire.”

He and his cousin Seif al-Islam, who was also at the mosque, decided to run and hide in the forest nearby until the hail of bullets stopped. But as they ran Seif received two shots — one in the head, the other in the stomach. 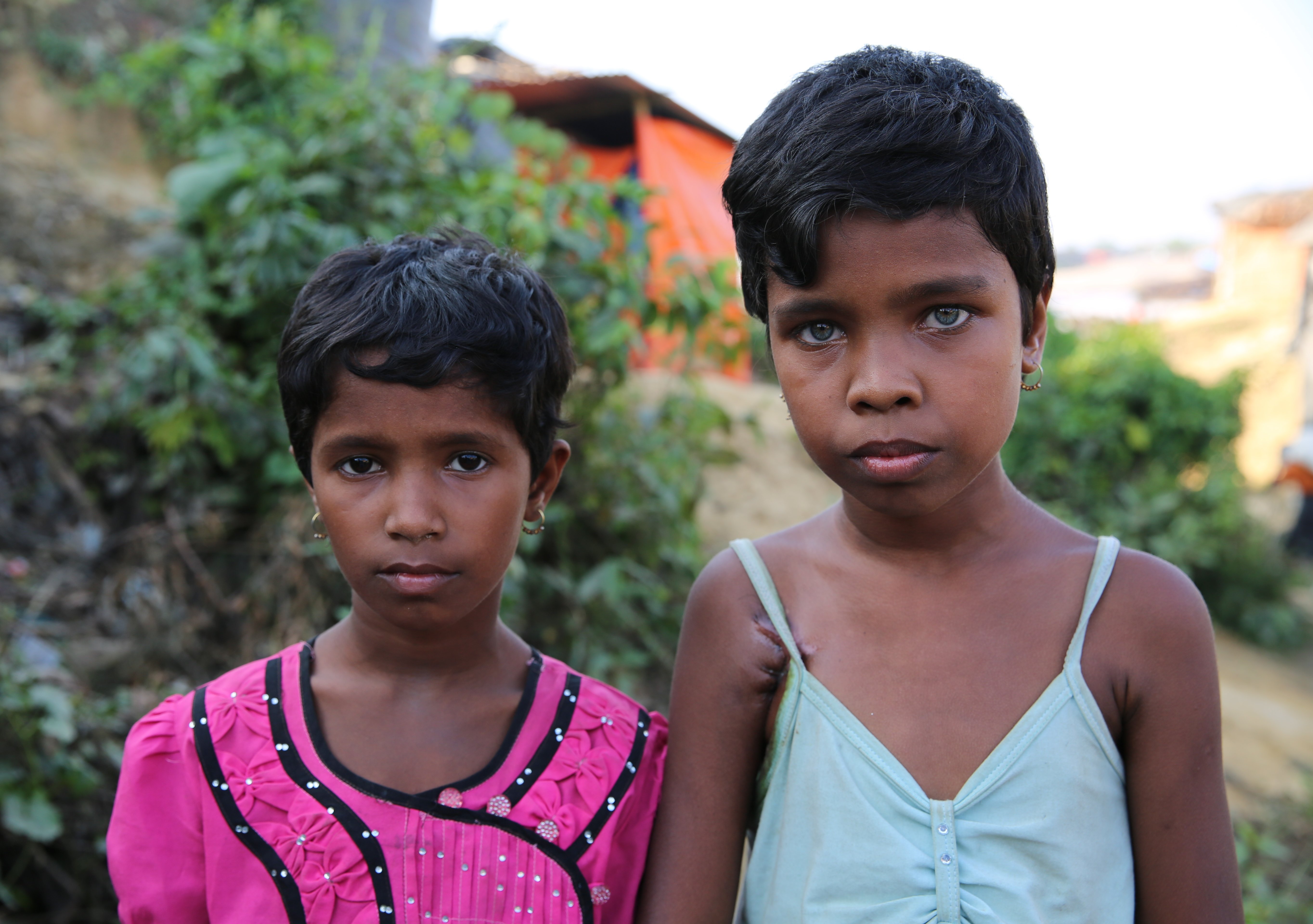 Azida, who was shot in the arm, and her sister Shamsida are the only survivors from their family.

— ‘At the mosque for dawn prayers — 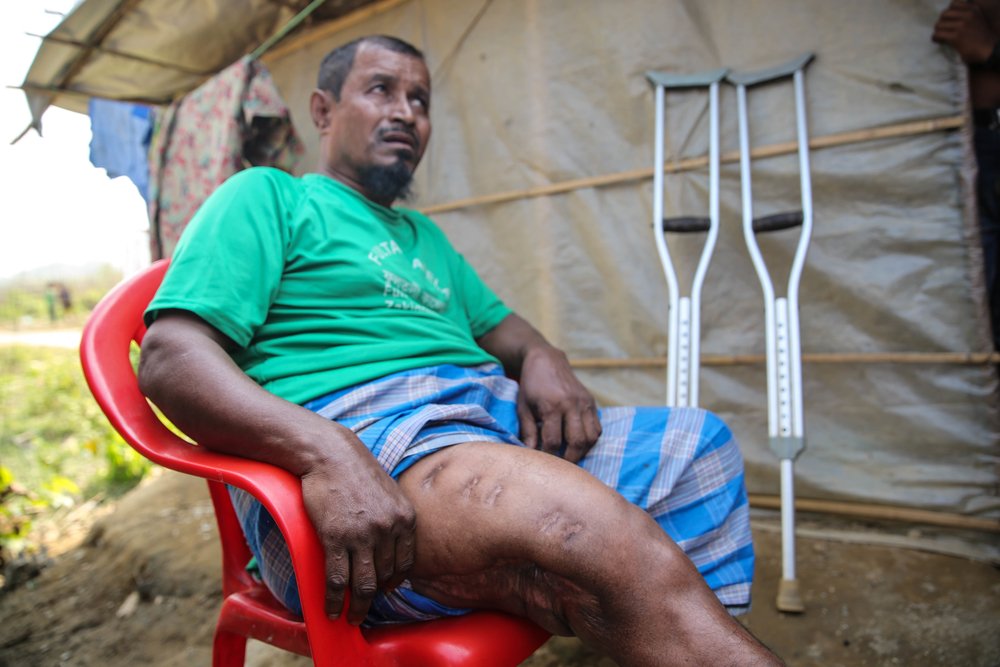 Mohammad Ghannam/MSF
Mohammad Younes was shot by the army a year ago. 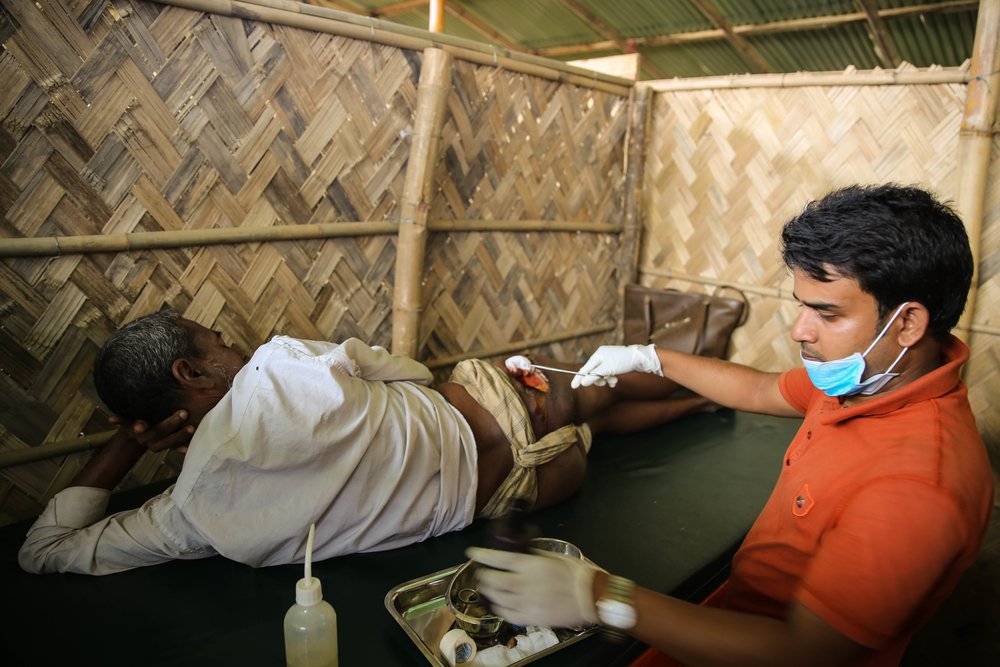 Mohammad Ghannam/MSF
Nour Mohammad was shot on the way to Bangladesh. He is being treated at an MSF clinic.

Mohammad was too shocked to stop, so he just kept on running, leaving his cousin to die alone. All he could hear was “a shower of bullets as constant as rain and the din of people screaming.”

In the forest, he found hundreds of other people hiding behind the trees. They stayed there all day, fearing for their lives. The shooting raged for hours — from sunrise till sunset. “Everyone was scared, praying to God, crying, wondering what had happened to their loved ones,” he says.

After dark, the gunshots stopped. But neither he nor the others dared to emerge, so they spent the night in the forest, in total silence.

DONATE TO THE ROHINGHYA APPEAL >

Early the next morning, Mohammad and the others started to head back. As they arrived in the village, he saw one neighbour after another break down in tears as they found loved ones dead or injured.

As he got closer to his house he expected the worst — to find his wife, his mother, his six sisters and his brother killed.

“Finally I reached my house. I entered to find everyone crying, thinking I was dead. We were so terrified that there was no joy in that instant. It was then that we decided that we were going to Bangladesh, where we could be safe. I promised my family I would take care of them. No one else was going to die there,” Mohammad says.

The family hurriedly packed up the few items of clothing and blankets they owned. At 6:00 am the same day, they left.

They paid a fisherman to take them across the Naf River, which separates Myanmar from Bangladesh. Within a week, they had found a spot in the sprawling collection of camps in Cox’s Bazar in Bangladesh, where with the help of NGOs they built a bamboo shelter to live in.

Like many of the Rohingya who have found refuge in the camps since the August crackdown, they live in squalid conditions. Lucky to be alive, they fear the future.

Mohammad and his wife have married only 10 months ago, and they are now expecting their first child. “She is three months pregnant, but my child will be born here like an animal,” he says, pained by their forced exile and the dearth of services.

His father, who died aged just 37, had been a farmer, but Mohammad fought hard throughout his youth to get ahead in life and to do something for his community. He graduated with a physics degree from Sittwe University in Rakhine state in 2011 — the first member of his family to ever obtain an education.

It is all but impossible for Rohingya to access higher education, and the community faces tough restrictions on movement that affect their access even to primary education as well as basic healthcare. Eager to help his community overcome the obstacles, Mohammad and seven other teachers set up a secondary school of their own in the village.

Now, with the village scorched and his dreams of a better future shattered, Mohammad has run out of hope.

“We are safe now, but our tears have not dried yet, we still cry, especially when we remember and talk about what we saw in the village,” he says.

Um Kalsoum, 23, was far less fortunate. She lost her seven-year-old son Abdul Hamid and her six-year-old daughter Salima in the August 25 killings in the town of Rauthedaung. 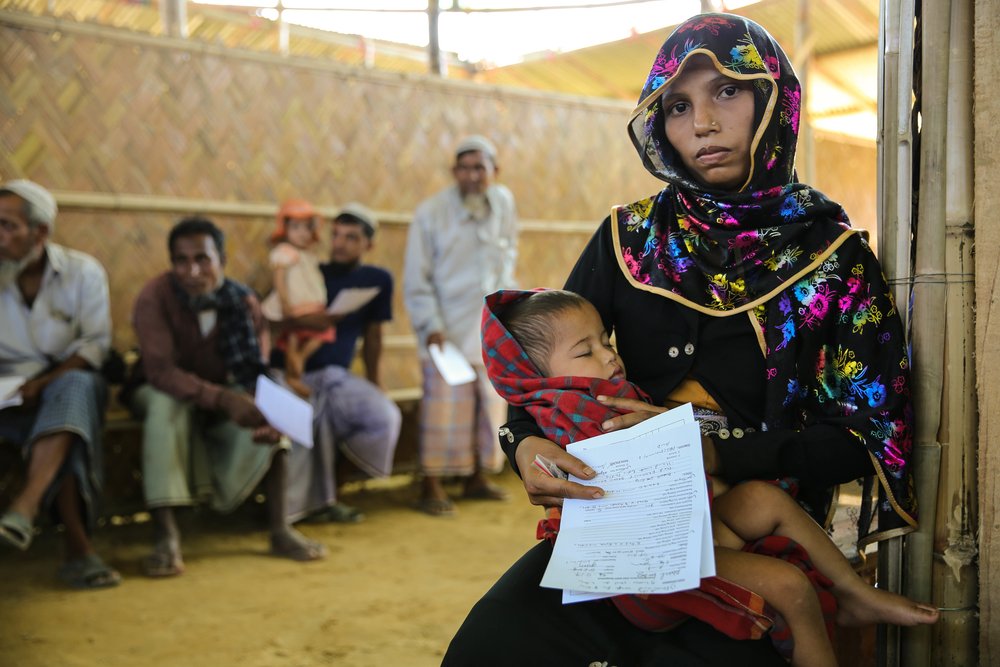 Her family was at home when the village was overrun. Overhead, a helicopter hovered, she says as she points at the sky, imitating the sound of the rotors.

“We heard a lot of screaming and the sound of gunshots in the morning. My son and daughter ran out of the house in the panic, and immediately the soldiers shot them, right in front of our doorstep,” the young mother recalls.

“I screamed their names,” she says, ordering them to go back inside. They did not reply, and she ran out to find them. “But I found the top of Abdul Hamid’s head blown off, and Salima with a bullet through her ear."

Um Kalsoum remembers screaming, the sound of her voice drowning out the din of the helicopter blades and gunfire.

Her husband grabbed her and their 18-month-old boy Abdul Hafiz, and they rushed into the woods as the helicopter dropped “something” on their wooden house, immediately setting ablaze.

As they headed towards the Naf River, like many thousands of others that day, they were stopped by an army patrol. “They beat my husband very badly and stole my wedding ring, which my father had given me when I got married. They slapped me hard across the face," she said, adding that she has been unable to hear with her right ear since.

"They told us to leave. ‘This is not your country,’ they told me."

Eight days later they made it to the Naf, but with so many families desperate to go across it took them three more days to find a fisherman to take them to Bangladesh.

Now, despite having lost her two older children, Um Kalsoum is trying her hardest to muster all the energy she has to keep going. After all, she must ensure her baby Abdul Hafiz survives.

But as if the recent months hadn't already been hard enough for Um Kalsoum, her surviving child has been constantly ill since they arrived in the camp. Nearly every day, she takes him to a clinic operated by MSF, desperate for a cure for his near-constant diarrhoea and fever.

Her face gaunt and pale with fright, she looks far older than her age. Like all other babies in the camp, her son has no nappies. All he wears is a red and green cloth wrapped around his head and his body.

“I am really sad for him,” the bereaved mother says.

Mohammad, the teacher from Rakhine state, says his community has not only faced violence now but has been targeted for assaults and discrimination for many years.

The attacks, he says, are “not new. They started decades ago. They (the military and militias) kill, rape, arrest and oppress all the Rohingya in the worst, most sectarian way possible”.

Even before August 25, Mohammad and his family had nothing.

“Decision-makers in the capital want us to have nothing so that we leave,” he says.

Indeed the violence and deprivation have been terrible for so long, that many Rohingya from other areas immediately knew what to do when they heard about the latest escalation. But even for some of those who fled preemptively, it was too late.

“We got the news that the army was coming to kill us, so we all prepared ourselves on the last day of (the Muslim feast of) Eid al-Adha on September 4,” says Mohammad Ali, a 60-year-old farmer who left behind land and 25 cows in the district of Sittwe. 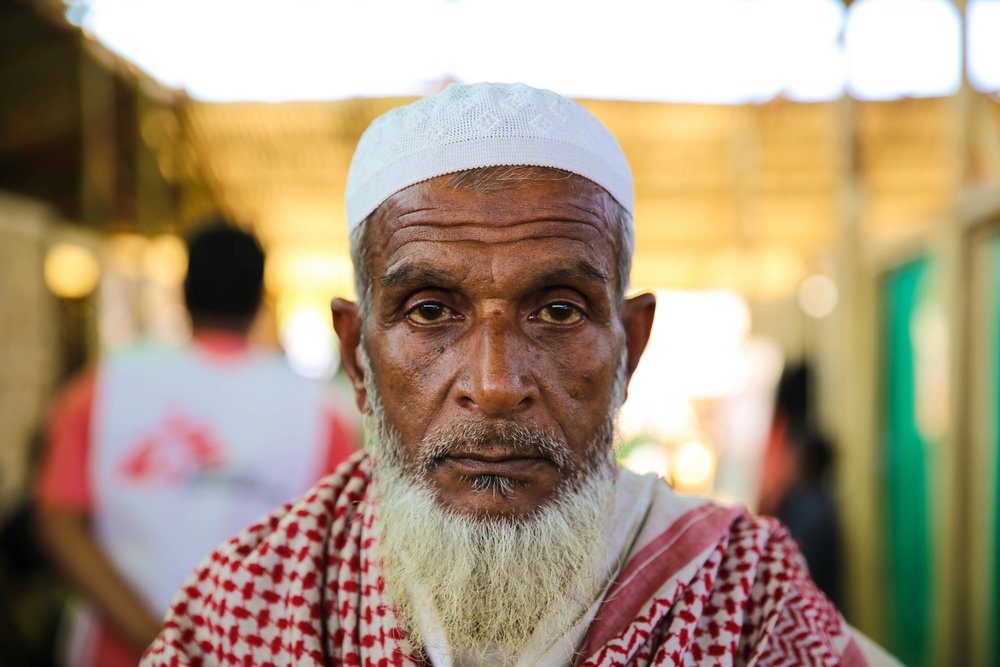 Mohammad Ghannam/MSF
Mohammad Ali lost his wife and two granddaughters on the way to Bangladesh.

Along with some 1,700 other Rohingya, he and his family set out towards the river.

“A few hours later the army attacked our group with knives, swords and rifles. The killing was random and the blood was everywhere. Those too weak to run begged for their lives, but even then they were slain. My two granddaughters — Del Bahar, 10, and Del Nawaz, 15 — and my beloved wife, 58-year-old Rohima, were killed. My wife was shot three times, and she fell to the ground, dead,” says Ali.

He and his eight children survived the attack and eventually made it to the camp. Here, however, conditions are grim. There are no latrines in the area where he and his family have found shelter, and there is no access to clean water.

“I am an old man, and my legs hurt. I don’t have much of a life ahead of me. But I hope my children will live in peace,” Ali says. “I hope they will not force us to go back to Myanmar, only to be slaughtered again in silence.”

donate to the rohingya appeal >

Our series on the Rohingya's living nightmare will continue with Part II: An Everyday Struggle in our February E-News