November 22nd, 2021- "I will stay here until she gets better," said Rebecca Achol Atak while sitting next to her granddaughter’s bed in Aweil State Hospital. Atong had suffered from severe fever and vomiting before traveling two days on foot with her grandmother to seek medical help. When she finally made it to the hospital, its medical staff did everything they could to help her. Unfortunately, it was too late. Atong’s condition kept deteriorating and she died less than 24 hours after admission. She was eight years old. Cause of death: cerebral malaria.

In South Sudan, Atong’s tragic story is far from unique.

Malaria is the leading cause of death within the country and according to latest available data, a total of 4,064,662 cases were confirmed there in 2019. 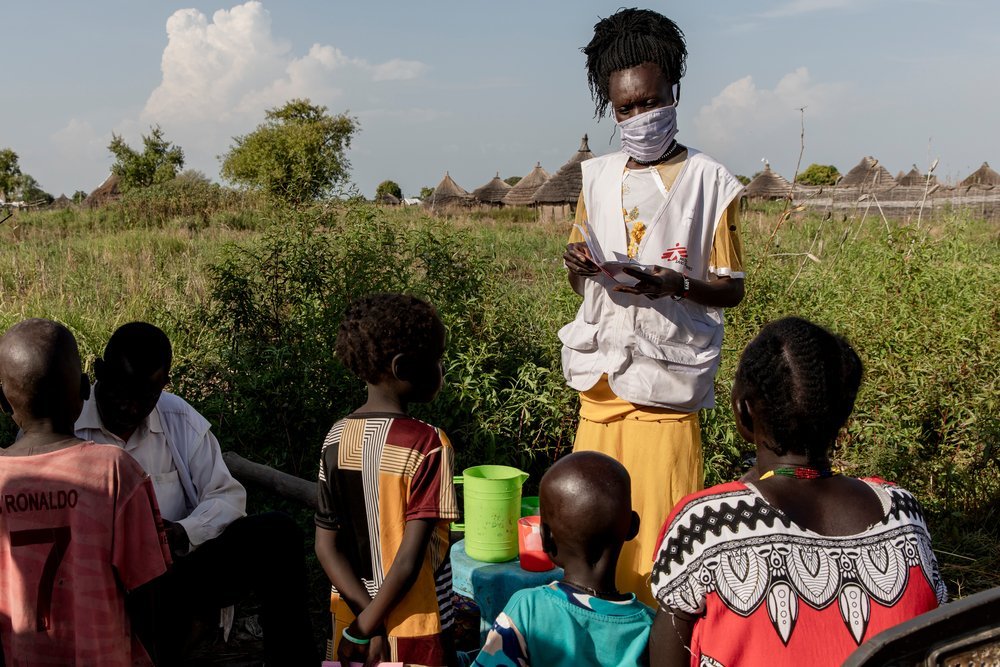 More than 4,800 people are known to have died from the disease during the same year, and children under five years old are the most at risk.

Yet these numbers might in fact underestimate the true severity of the crisis. 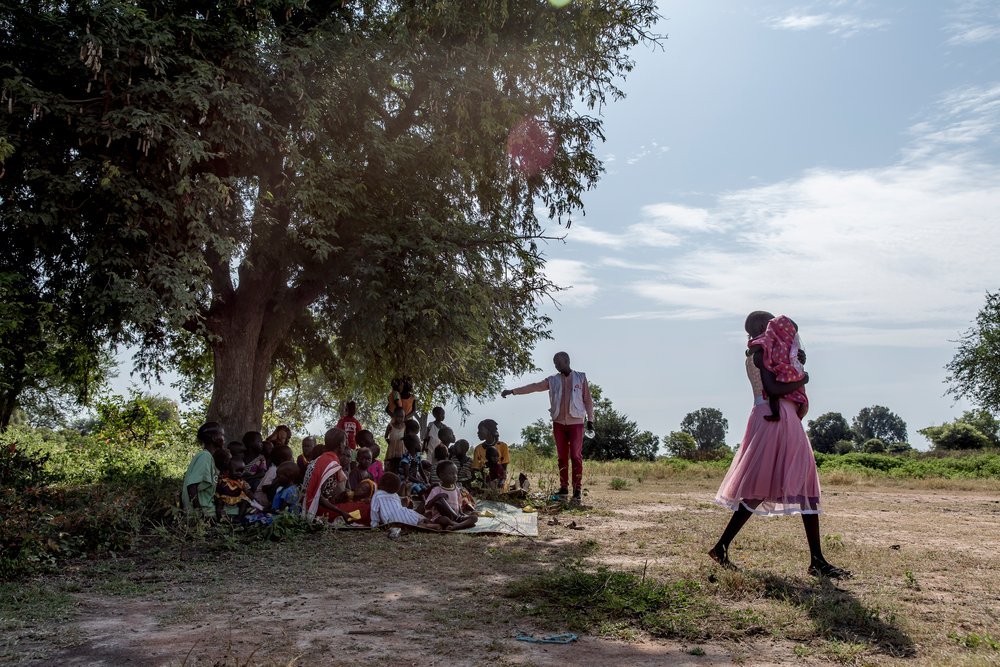 As Bowa Malou Wol, an MSF nurse working in Aweil State Hospital, has put it: "Most children are dying in their homes and villages."

"They never make it to hospitals that are far away."

"And we don’t actually know how many of these children there are."

This is particularly striking given the fact that the existing healthcare infrastructure already operates under immense pressure. 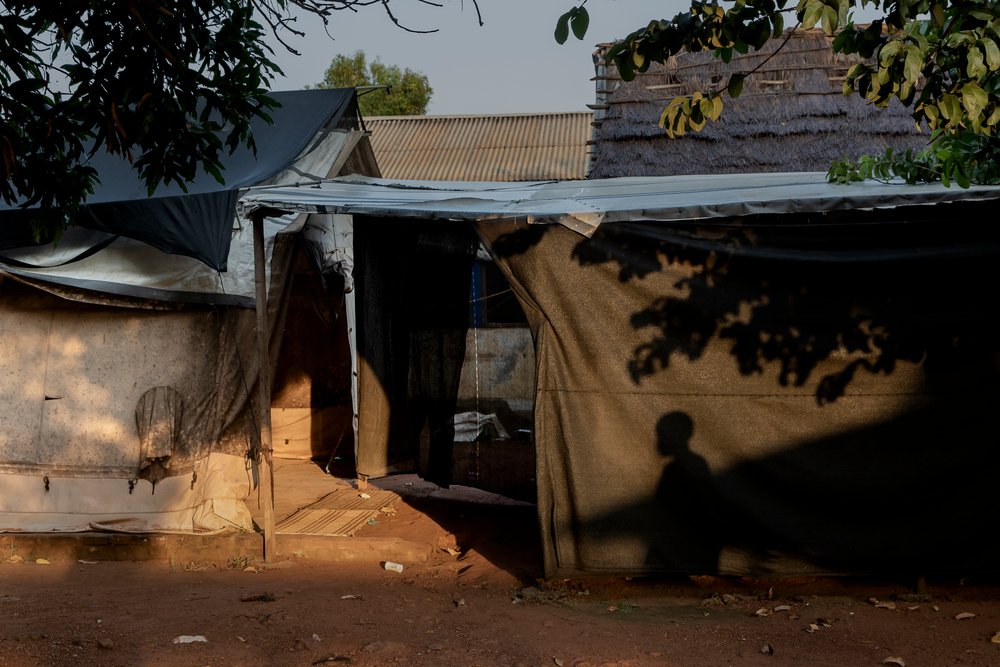 Adrienne Surprenant/Item
Tents have been set up in Aweil State Hospital by MSF to increase capacity. October 27th, 2021.

The MSF-supported Aweil State Hopital is a case in point.

It is the only facility currently providing comprehensive health services to an estimated 1.2 million people in Northern Bahr el Ghazal State.

Malaria is transmitted throughout the year but it peaks during the rainy season from about July to November. 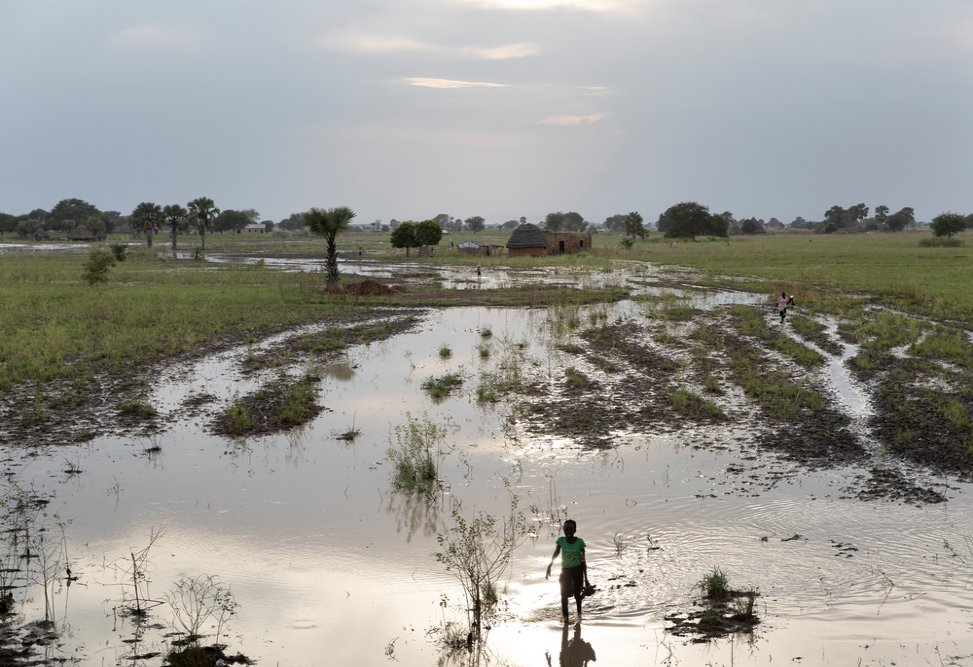 Adrienne Surprenant/Item
A girl walks through a flooded area on her way home near Aweil Town, South Sudan, October 27th, 2021

In these months, thousands of children suffer from malaria across the region and must be promptly tested and treated with antimalarial medications to reduce the risk of developing severe malaria, which can be fatal or cause serious complications. 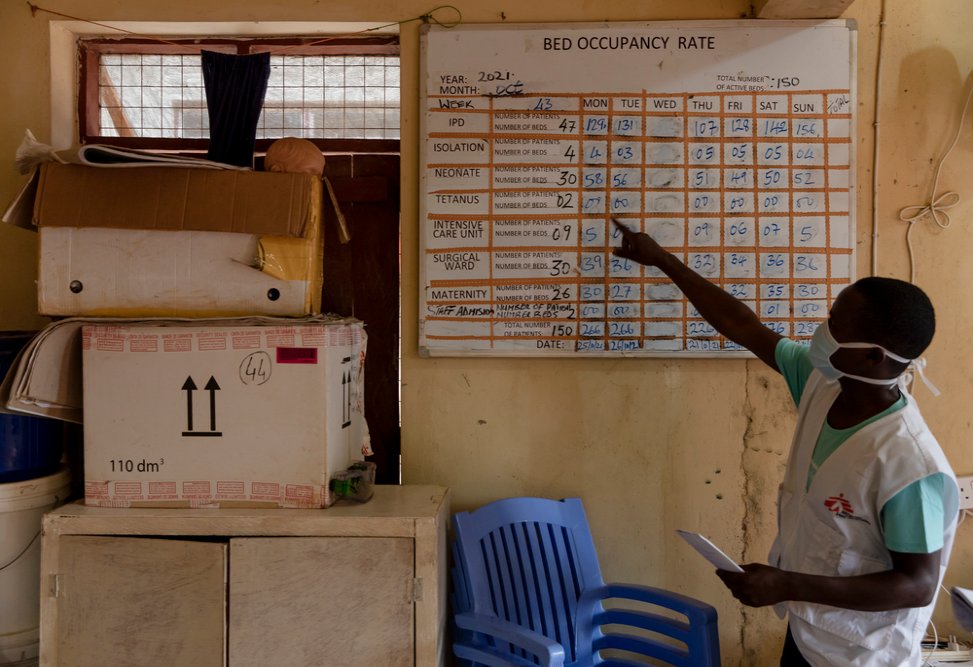 "We had almost 300 people in our section of the hospital which normally has 150 beds."

"Most of them suffer from malaria."

"And honestly, we are running out of places where to put them."

"Even though we have built new malaria tents to increase capacity, it is still not enough."

"Some have to sleep in hallways because there is just no room anywhere else." 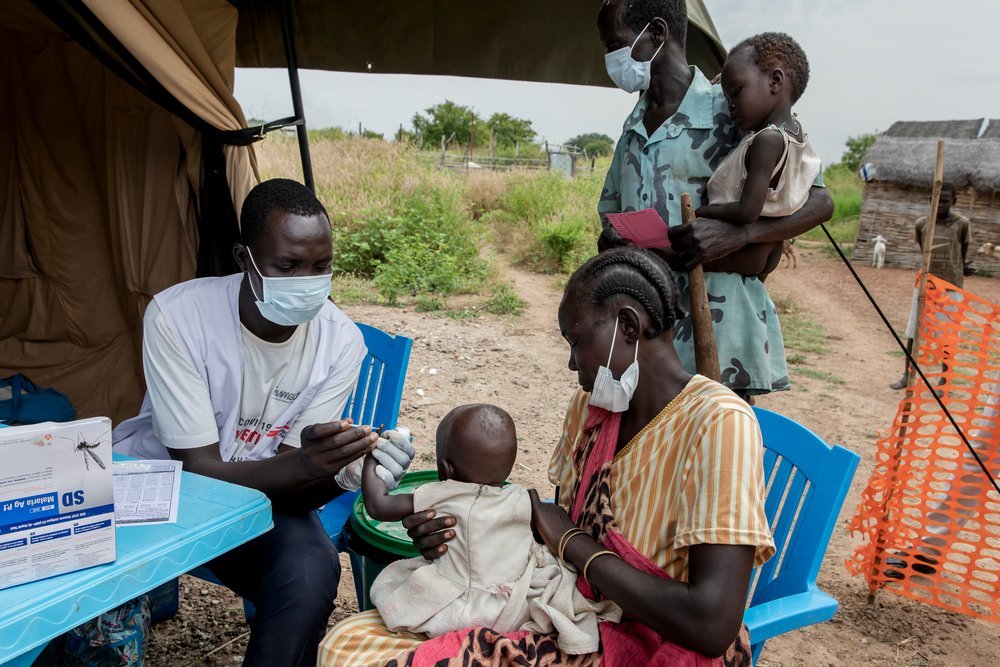 Adrienne Surprenant/Item
A member of MSF staff does a rapid malaria test before children receive the SMC medication in a seasonal malaria chemoprevention distribution site in the village of Kuom, South Sudan, October 27th, 2021.

These figures are higher than in 2020 or 2019, Lawal says, which may be due to gaps in medical care at the local level.

The region's local health facilities rely on international support for antimalarial medications and tests, and these were in short supply during the peak malaria season.

Some health facilities lost external support entirely and are no longer functioning. 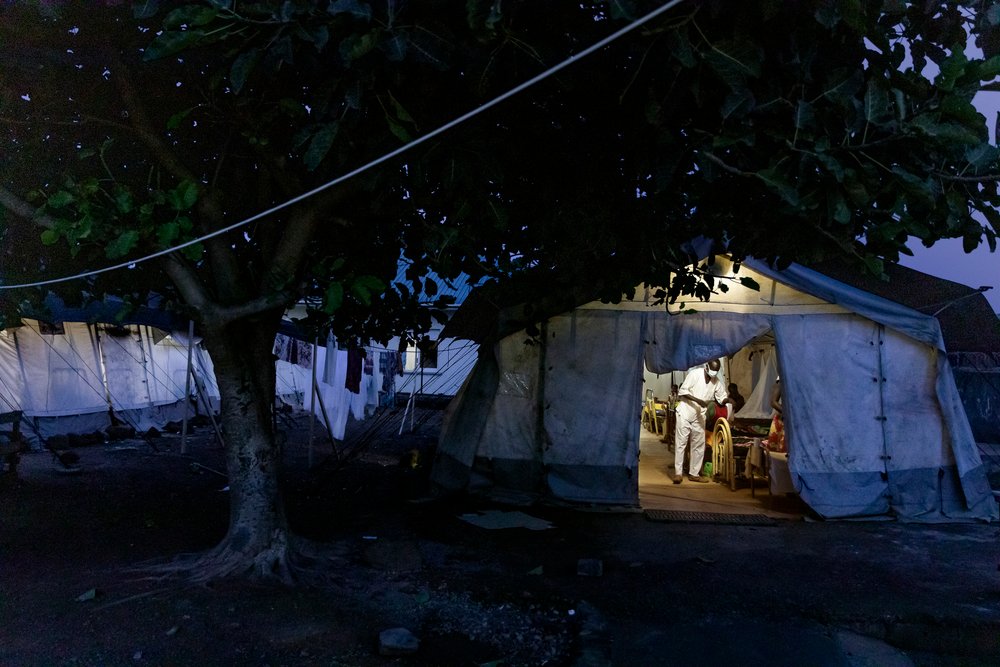 In Aweil State Hospital, the situation has already resulted in critical shortages of blood for transfusions.

Teams at the hospital must administer hundreds of blood transfusions per month during the rainy season, but blood supplies are often difficult to come by in South Sudan.

Blood is typically only donated by a patient's relatives. 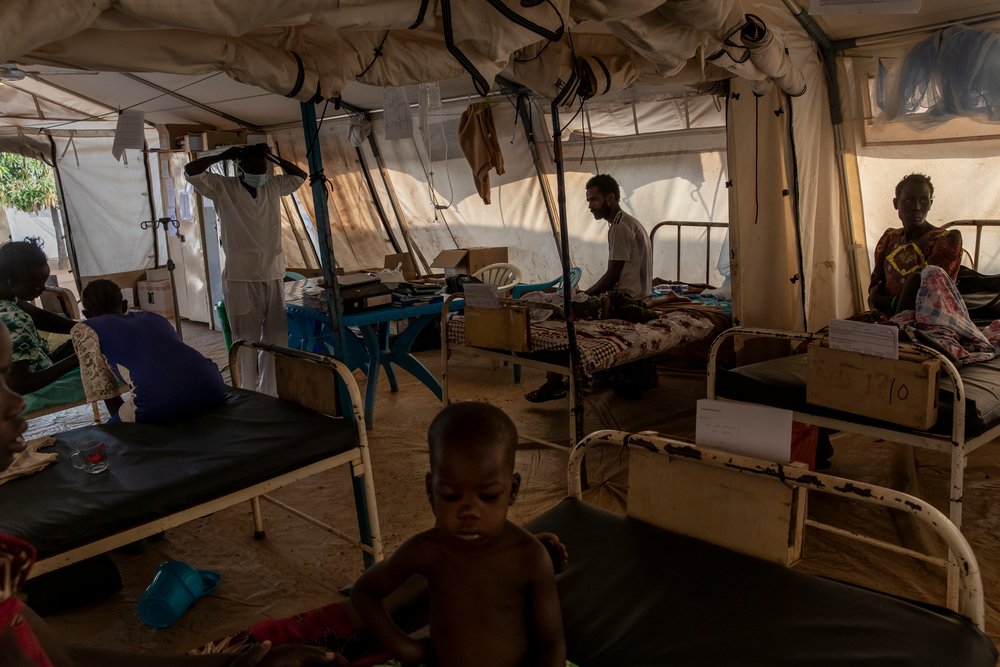 "Blood for transfusions is critically missing."

"One of the problems is that families rarely own phones and we can’t reach out to relatives when blood donation is needed."

"This is what truly leaves us incapable of treating many severe cases of malaria—sometimes with fatal consequences," explains Lawal. 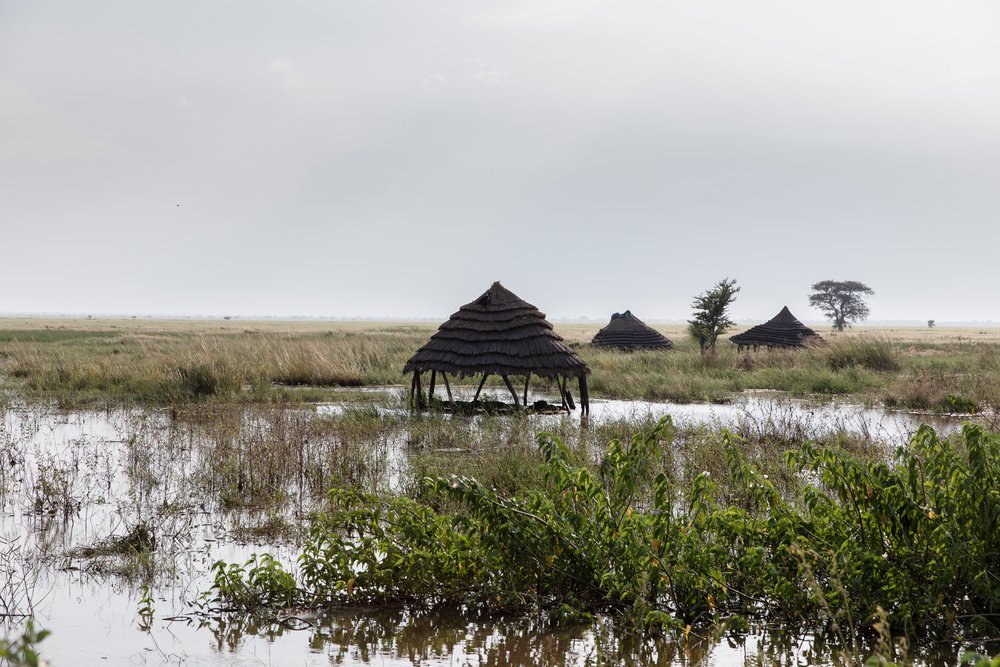 Widespread flooding exacerbated the malaria crisis this year, as large pools of stagnant water provided perfect breeding ground for mosquitos which then spread the disease.

The floodwaters also made it more difficult for health workers to reach remote areas and for patients to reach health facilities.

This year, MSF launched a pilot program to prevent malaria in Aweil, in collaboration with the Ministry of Health.

It is called seasonal malaria chemoprevention (SMC) and its purpose is to prevent infection and serious illness among those most at risk—children from 3 to 59 months—by providing them with preventive antimalarial medications once a month for five months during the rainy season. 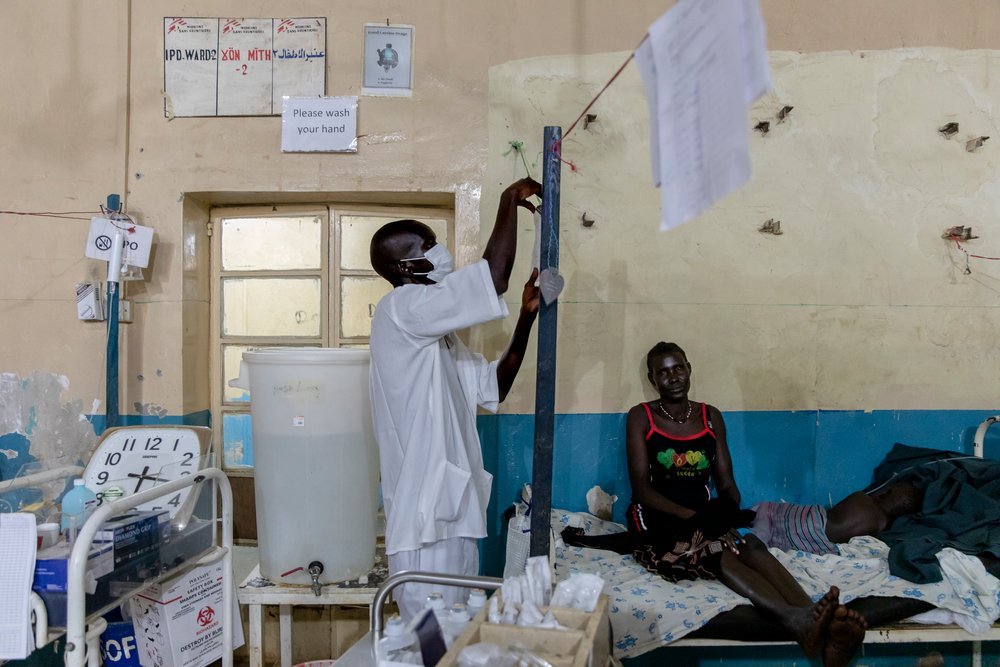 Health workers also conduct nutrition screening so children with malnutrition can be identified and treated promptly, as malaria can be particularly deadly among children suffering from malnutrition.

So far MSF teams reached nearly 14,000 children under five and the overall response from the community has been very positive.

"I am happy the program is here. Prevention is important. I have six children and two of them are younger than five."

"Now they can be protected. Malaria is bad every year and now is the first time drugs for its prevention are available to us," said Ateny Mayen Akoi after her eight-month-old daughter Agel received SMC medications at a distribution site in the village of Kuom. 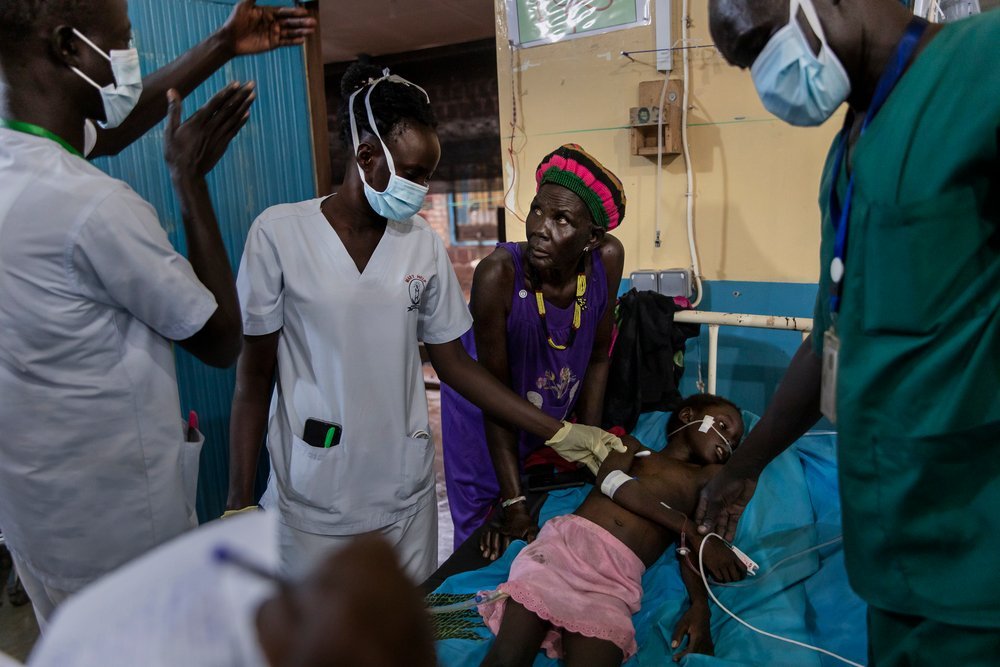 Improving the prevention of malaria is an urgent task, and multiple interventions are needed in combination, MSF staff say.

"Seasonal malaria chemoprevention is an important tool that has already been used successfully in countries of West and Central Africa that also have high transmission of malaria," explains Saschveen Singh, MSF tropical infectious diseases advisor.

"It is essential to find the best combination of approaches to reduce malaria's devastating impact on young children, which is why we are carefully piloting this effort in South Sudan."

Lawal notes that preventing malaria is cheaper and often easier than treating malaria. 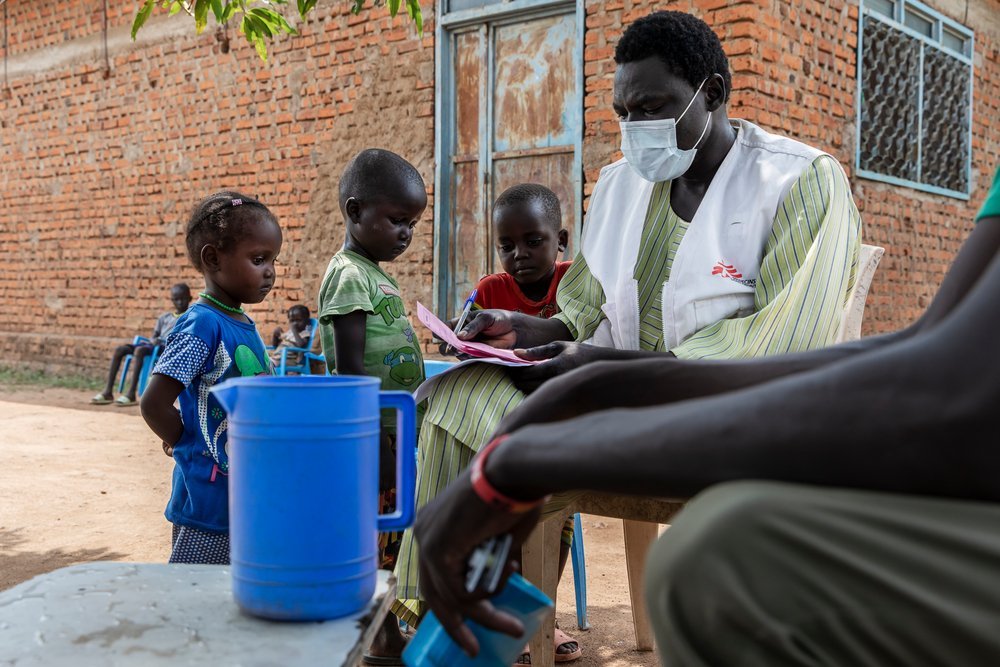 Adrienne Surprenant/Item
Children of Amoth Wed Duang (Athian, Akoi and Mayen) receive the SMC medication from MSF staff, outside of her home nearby the village Kuom, South Sudan, October 26th, 2021.

"However, we also have to remember that SMC isn’t the only form of prevention. Distribution of mosquito nets, indoor residual spraying with insecticides or ensuring sanitation of stagnant water are all measures that have an important role to play."

"There is no one silver bullet." 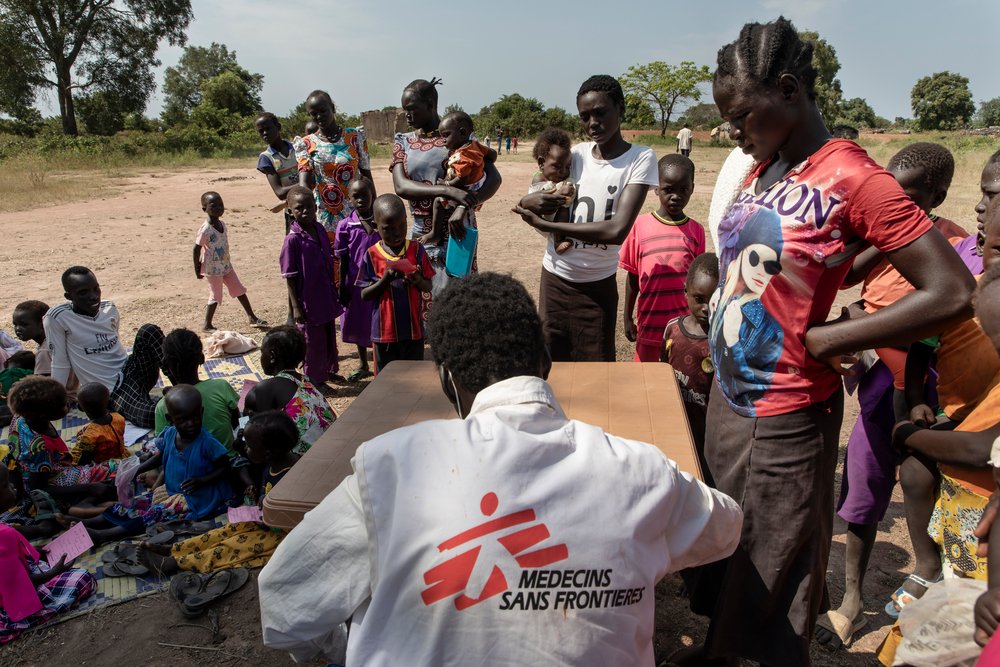 Today we offer paediatric and maternal healthcare throughout the year at Aweil state hospital, which serves around 1.2 million people.

Our services include an inpatient feeding centre for malnourished children, a paediatric and neo-natal ward, intensive care unit and emergency room, a maternity with treatment of basic and complicated obstetric care, as well as malaria treatment with rapid diagnostic tests, medication and supervision at the hospital and in primary healthcare centres during malaria peak.