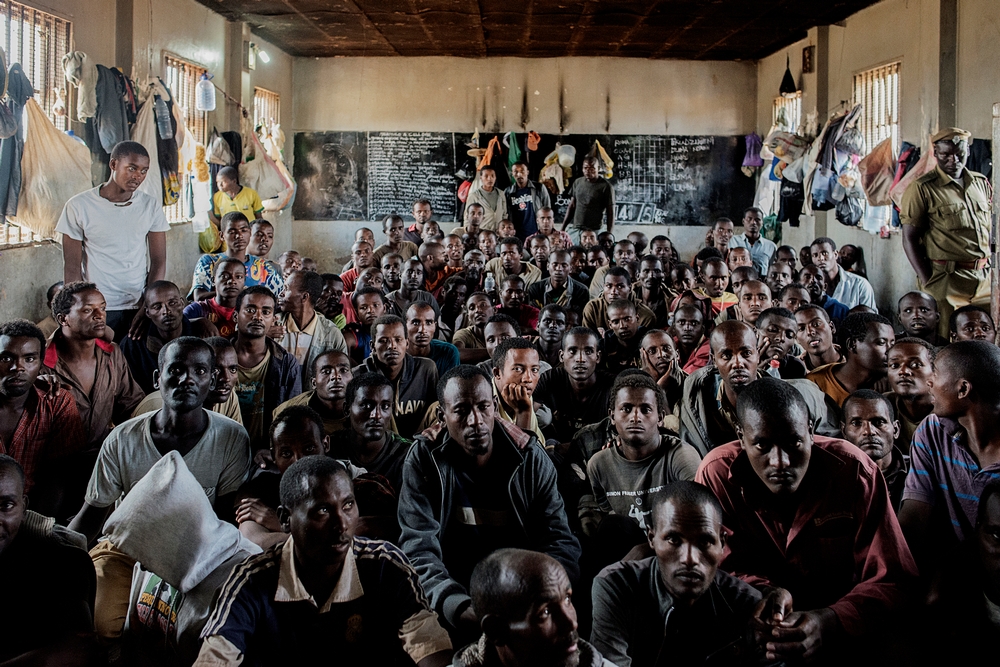 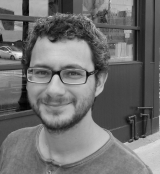 The men are squeezed together on the cement floor, with a space of less than half a square metre per person on average."The worst is at night. The heat emanating from dozens upon dozens of bodies is so stifling it’s palpable.

Packed tightly like battery hens for 15 hours a day, the inmates sit up in rows, their heads lolling on their knees, occasionally rolling onto a neighbour’s shoulder.

This is the harsh reality of overcrowding in Maula prison, in the Malawi capital of Lilongwe.

Built to accommodate 800 prisoners, Maula is bursting at the seams with 2,650 inmates. Amongst this desperate population, the most vulnerable are the nearly 300 undocumented migrants who were arrested as they travelled towards South Africa. 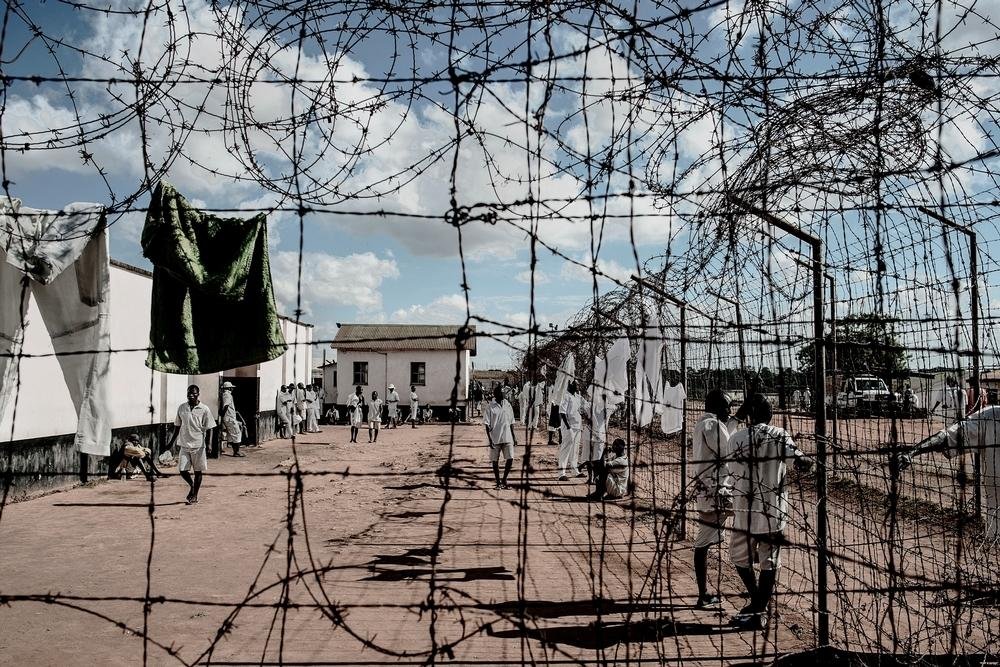 These men represent the reality of our mobile world, where people are on the move, seeking refuge from violence and inequality or escape from chronic poverty.

Lacking any kind of resources, they left their countries of origin in the hope of building a decent life in South Africa. A dream denied at home, that dramatically ended up in Malawi’s prisons.

It is a bright June morning when I visit Maula prison to assess the living conditions of foreigners who have been deemed by the court as undocumented migrants.

"We are not criminals! But now, in prison, we are not human anymore."
Abebaprisoner, from ethiopia

The sun shines a bleak light on the daily realities of migrants held together with common-law offenders, some of whom are serving long sentences for violent crimes.

'We are 204 in this cell,' says Thomas, a Malawian inmate, pointing to the number written on a blackboard in the 60 square-metre cell. He introduces me to a group of young Ethiopians sitting outside in the sun.

'It gives us Vitamin D,' jokes Abeba, a man in his thirties from Durame, Ethiopia. 'We are not criminals! But now, in prison, we are not human anymore,' he says. 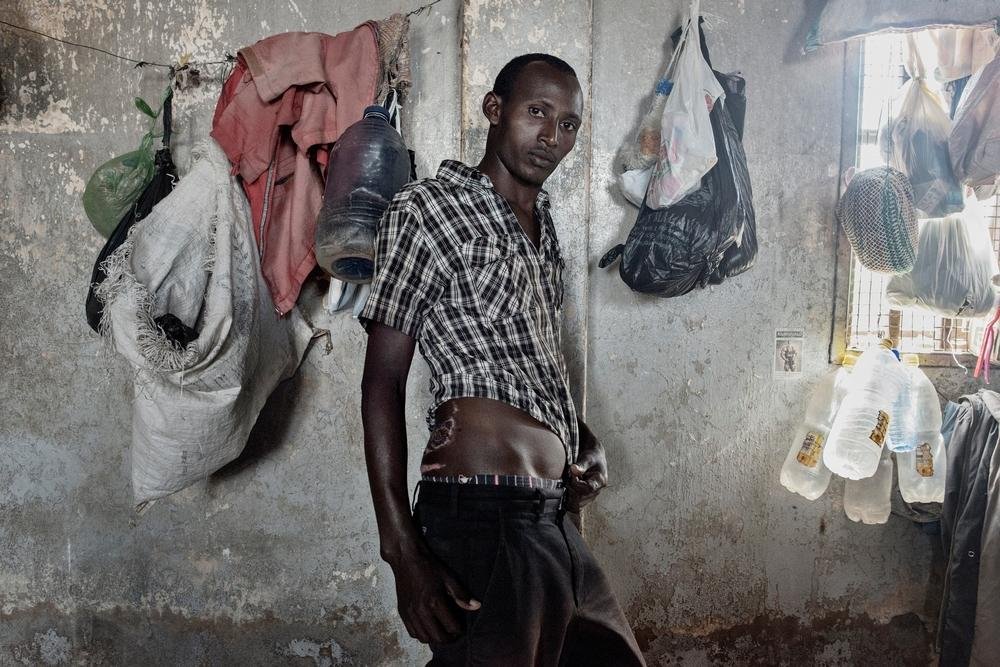 Luca Sola
MALAWI. Lilongwe. June 2015. Maula Prison. Tasfaya Lanago is 18 years old. He left Ethiopia due to economic hardships and arrived in Malawi in December 2014. He was travelling with fellow Ethiopians. Upon arrival in Malawi he was arrested for illegal entry and sentenced to 6 months imprisonment at Maula prison in February 2015. He will finish his sentence in July 2015. His experience in prison has been terrible as food is inadequate, sleeping conditions are poor, lack of hygiene and lack of support economically as he does not have any relative or friend outside the prison here in Malawi. He appealed to the Malawi Government to release them as repatriate them back to Ethiopia as he felt their imprisonment was illegal. He has sores due to poor sleeping conditions: as most prisoners he sleeps on cement floor, next the the chamber that is used as a toilet, and usually sleeps on one side of the body. He gets treated at the prison clinic which is being run by MSF. «The place where I come from [Hosana] is mainly countryside and people do farming. In my family we are 8 children, 5 boys and 3 girls. Only my father works, he has a small business, selling things. All is not enough for us. Most of my brothers go to school, I decided to move out. No food there. Continuous drought. I worked in South Sudan, in Kastam, for two years. I was moving around, doing whatever I found: farming, small shops, and transporting goods. But there…ah!...there is not a peaceful country. And it is not easy to have stable job: people are bad, they don’t like us to stay, and they are always in war […] I get enough to move again, and through South Sudan I went to Uganda and then to Kenya. I was having some little money, enough to pay a truck to Tanzania. Yes…I wanted to go to South Africa because there I can work and do real money. […] When I arrived in Malawi I was caught. Before, what happened is that I staid 15 days in Dzaleka Camp (UNHCR-managed refugee camp in Malawi) and did little work. I changed some money I had and paid a truck. We were stopped by the Police in Deza and they caught me. They brought me to the Police Station where I stayed for three days, when Immigration came. They brought me to Maula…it was…I came in October 2014 in Malawi…I was arrested sometime around November, December, after one month, I mean. […] I wasn’t brought to Court, no. Here in Maula, Immigration always says: “You will be repatriated! Tomorrow, tomorrow…!” Ah! Tomorrow, tomorrow, always this they say!! It’s months I am here; nine months I think? how long I have to stay? […] If you ask if I would do what I did again…no…no…ah...no…I would stay in Ethiopia. This prison is terrible. I thought Africans were all brothers, but now…you see. We don’t have food, not clothes, or soap. They are killing us. If I knew this before….no…ah! »

The number of foreign citizens, mostly Ethiopians, detained in Malawi for illegal entry has increased in the past few years, and has become a phenomenon of humanitarian concern.

Most have been charged for three months, but the reality is that they have been locked away for more. The law requires they return to their homelands after their periods of detention, but bureaucratic delays impede any way forward.

Moreover, they are supposed to cover their expenses for repatriation, a contradiction to their weak economic status.

A young boy leaning on a wall tells me, 'My dream is to reach South Africa; this is what I have worked towards for years. I knew it would be difficult, but I never thought I’d end up here.

'I thought Africans were all brothers. But here…here it seems different.' He stares at me, as if questioning for the first time what he had always thought to be true. 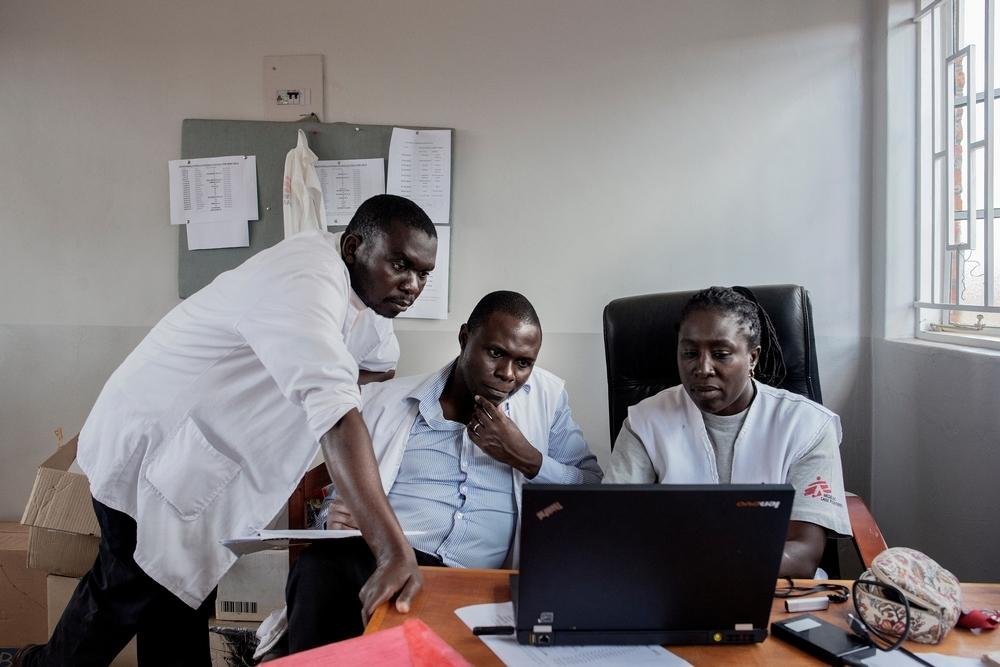 One meal a day

Three young men are grading beans outside their cell. 'You see? These are not good. They are uncooked and rotten,' says one of the men. 'We eat them like that,' another inmate adds.

Prisoners in Maula get food only once a day. They usually eat a plate of nsima – ground maize that fills the stomach but doesn’t give many nutrients. Beans are an occasional treat. Nutrition is so poor that last month MSF had to treat 18 inmates for moderate-to-severe malnutrition.

Ethiopians follow a long-standing pattern of migration towards South Africa, their beacon of light.

'Where we live, there is not enough land for everyone, we are too many in my family,' says Abeba, counting with the fingers on both hands the number of brothers in his family.

'If I go to South Africa, after two or three years I can afford to buy a house. If you work for 20 years in Ethiopia you can’t buy anything,' he says. Another young Ethiopian adds, 'If you need a job there, you have to belong to a certain family that has land. My family doesn’t have any.'

For many, leaving the country wasn’t a choice. It was their last hope for survival. 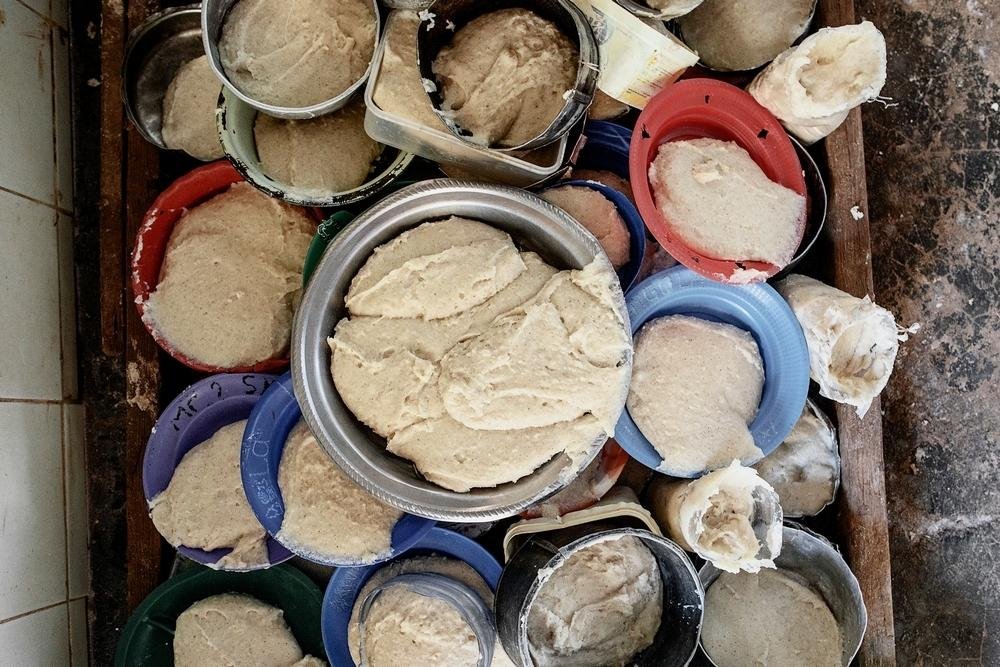 Luca Sola
MALAWI. Lilongwe. June 2015. Maula Prison. Nutrition is a major concern in Maula prison as inmates receive an inadequate supply of food in terms of quantity, nutritional value and calorie intake. Prisoners in Maula eat only once a day – typically a plate of Nsima (maize flour), sometimes with beans or vegetable. Protein is almost entirely absent from their diet and the Ethiopian group in particular is suffering from skin conditions related to protein deficiency because the Malawian staple food is incompatible with their traditional eating habits (the Ethiopian staple is Nnjera a protein rich pancake). MSF is providing plumpy nut – a therapeutic food supplement to severe and moderately malnourished inmates. In June, MSF treated five severely malnourished prisoners and 13 moderately malnourished in Maula prison.

Emmanuel pulls out his torn wallet, opens it and shows me the transparent sleeve inside. Instead of pictures, it holds his talisman: a piece of paper with three phone numbers on it.

'These are my friends in South Africa,' he says. In the courtyard of the prison, Abeba gazes at the other inmates playing football. I ask him if he wants to go back to his country. He turns his head towards me, with a serious smile too mature for his age.

'We can’t go back,' he says. 'If we go back to Ethiopia, what could we do there? We can’t work anymore. We have become too sick for any kind of work.'"