Mali: Journeys that can cost a woman her life

Médecins Sans Frontières (MSF) is an international, independent, medical humanitarian organization present in Mali since 1985. In 2017, in the northern region of Ansongo, we provided medical assistance at more than 1500 births and offered 2,776 maternal consultations. In Douentza, in the centre of Mali, 442 women were assisted during childbirth.

“It’s not right that a woman should die while creating another life, and we must do everything we can to help women by providing medical care during deliveries,” says Mamadou Keita, obstetrician/gynecologist specialist and Medical Referent for MSF in Ansongo.

MSF also offers free medical care to women in other regions of Mali including Kidal and Tenenkou.

Journeys that can cost a woman her life

Tala, 17, comes from a nomadic community about 100km from the town of Ansongo, in eastern Mali. She travelled for two days in difficult conditions to reach the Referral Health Centre in Ansongo after suffering from a hemorrhage and anemia during the birth of her first child at home. 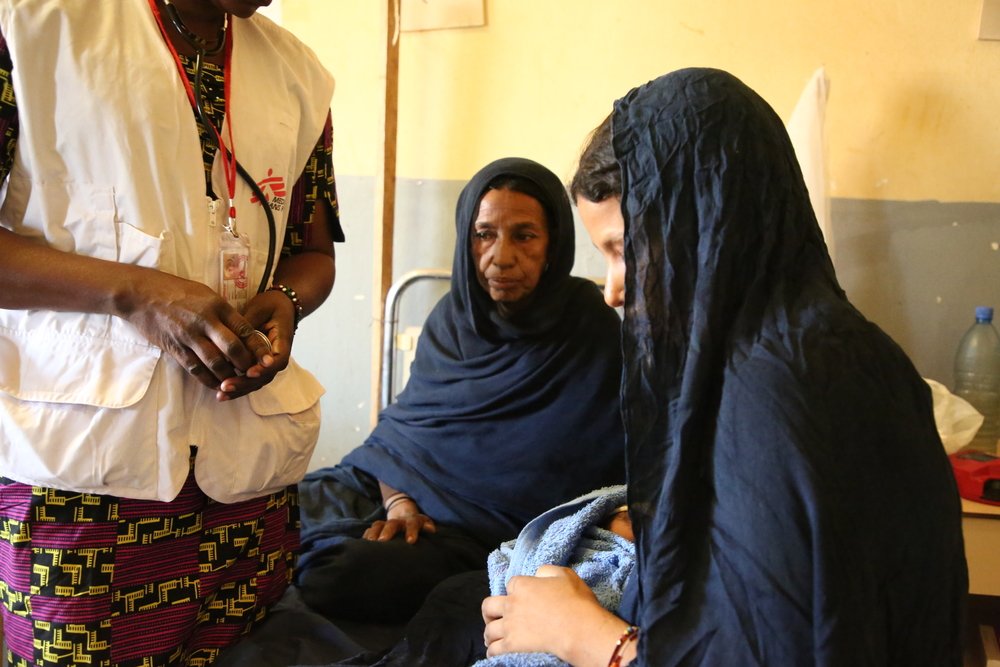 Seydou Camara/MSF
At the Referral Health Centre in Ansongo Tala’s mother, Tahata, sits at her daughter’s side.

“My daughter fell ill after she gave birth. She became very weak. She lost a lot of blood after the birth. The community health centre is very far from our house, more than 50km. The state of the road is not good and often we are afraid of what could happen on the way there.

She had to give birth at home, like the majority of women who give birth in our community. As she wasn’t recovering we used traditional treatments and medicine to care for her, but they didn’t work. At that point we decided to bring her to the health centre in a cart, alone, because the men were in the fields. We brought the newborn baby with us.

The journey lasted an entire day and it was very hard. At the health centre her condition became even worse. The medical staff spoke to us about the presence of MSF in the Ansongo hospital. We went back on the road, still in the cart. My daughter was really suffering with the heat. Fortunately we came across a vehicle and the driver agreed to take us to Ansongo.

When we finally arrived it was late at night and my daughter was hospitalized. They told me that she was suffering from severe blood loss. I remember asking myself how I would be able to pay for the transfusions and the care. And then the MSF teams did something amazing: they saved my daughter’s life, without asking me for any money, and I even received food while I stayed by her bedside. Today she is much better and can at last look after the baby.” 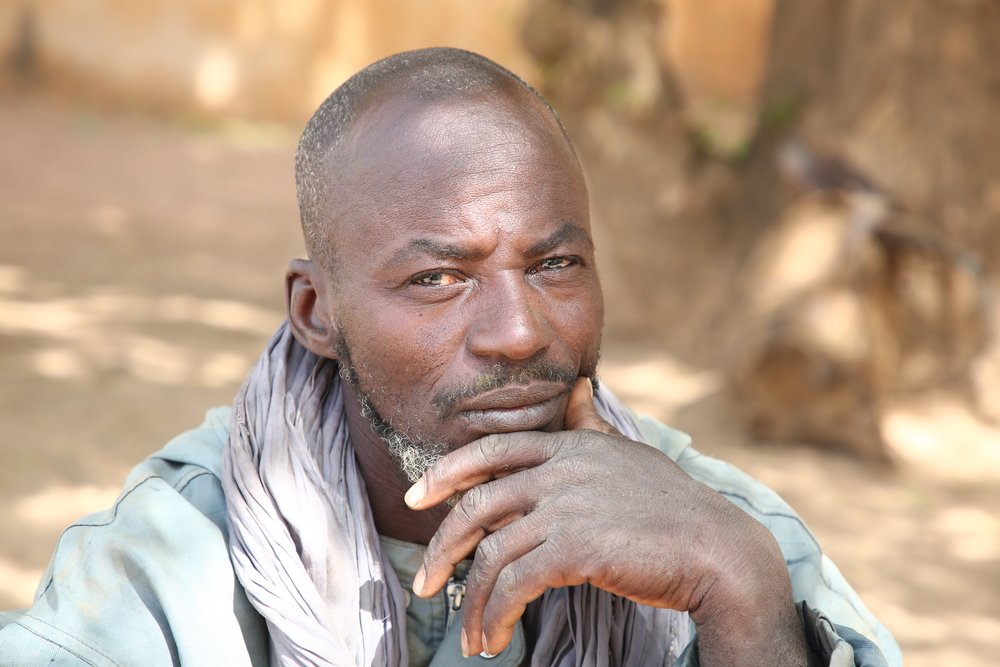 Amadou, a farmer, originally from Douentza in Mali, accompanied his wife Awa to the Referral Health Centre in Douentza. His wife was suffering from severe anemia following a hemorrhage that occurred when she gave birth prematurely at their home.

Awa experienced an enormous hemorrhage when she gave birth prematurely at home, without any medical assistance. To try to stop the blood loss, her parents used traditional medicine which did not work. During this time Awa was suffering, unable to eat, and weakening rapidly. Finally she became severely anemic. It was only after twenty days in this situation that she arrived in a critical condition at the Referral Health Centre in Douentza. MSF treated Awa without charge. Amadou, her husband, was with her.

“We are from Douma, a village very far from Douentza where there isn’t even a health centre. That’s why I brought my wife Awa here, so that she could be cared for. She was pregnant for the first time. As we are far from the hospital, she didn’t have any prenatal checkups. But we thought we had calculated how far along she was, and that she wasn’t yet at term. One day, suddenly, she felt pains in her stomach.

That was the moment that we realized that she was on the point of giving birth to our first child. It was too late to take her to the hospital. And what’s more there are no health centres near us. It was so hard for us to see what was happening: she lost a lot of blood and the baby was stillborn.

The tragedy happened 20 days ago. To make the blood stop, we used traditional medicines which took a long time before stopping the hemorrhage. It was an improvement, but Awa still wasn’t ok, she had no appetite, she was much less lively. That was the moment that her skin began to look swollen: her face, her palms, everything became deformed. We searched for a way to bring her here. When we arrived, she was examined and according to the advice of the doctors she began to eat well and regained her strength a little.” 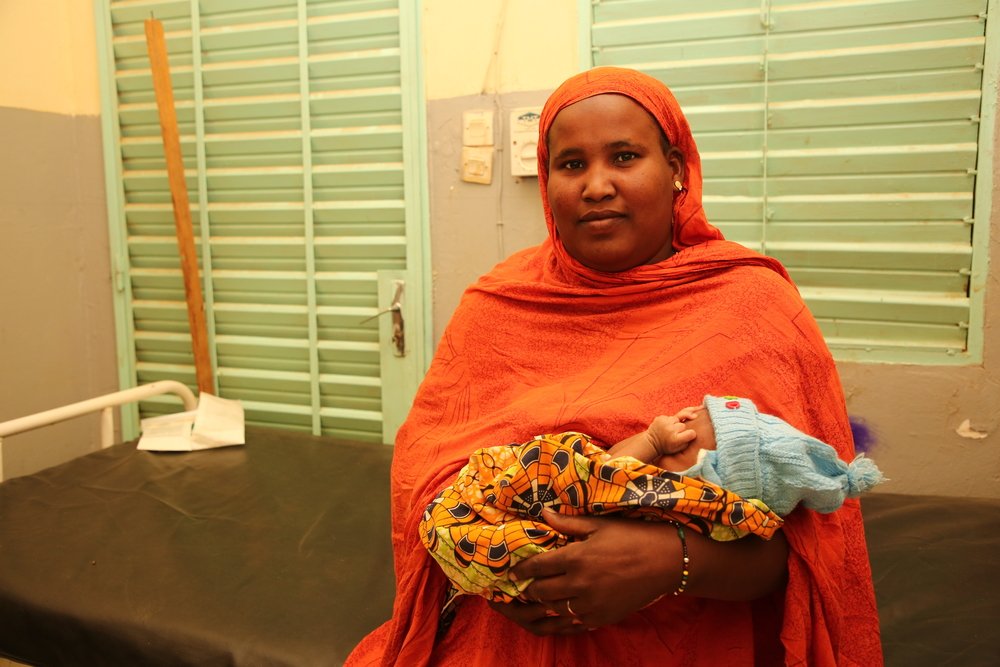 Seydou Camara/MSF
Wanli, from Ansongo in the north of Mali, holds her niece Aminatou's baby. Aminatou suffered from complications following her delivery at home. She was hospitalized in the maternity ward of the Referral Health Centre in Ansongo.

“We were afraid to go out, to go on the roads alone, because of the insecurity”

Aminatou was brought to the maternity ward at the Referral Health Centre in Ansongo in an urgent state 14 days after giving birth at home without any medical assistance. She had suffered from eclampsia. Her condition stabilized after the intervention of MSF staff and her life is no longer in danger.
“Everything began at five o’clock in the morning when she was having breakfast. It was at that moment that the eclampsia started. She fainted, and she couldn’t stop shaking. We searched for a way to bring her here to the hospital. But it was night time so there were no men to accompany us to the hospital. We were afraid to go out, to go on the roads alone because of the insecurity.
The next morning we brought her to the community health centre where she had been having appointments throughout the pregnancy: the last one was three days before she gave birth. My niece suffers from complications resulting from giving birth at home. I know that giving birth outside the hospital works some of the time, but also sometimes it can have really serious consequences. But because of the insecurity women don’t have any choice but to give birth at home, especially during the night. We know about the possible consequences.”
Dr. Sidiki Amadou is the MSF doctor who treated Aminatou in the emergency room of the maternity ward.
“Thanks to the treatment she has now received, the eclampsia has reduced. Giving birth at home is something that we have to try to stop. Above all for the population in Ansongo, because often there are complications like in Aminatou’s case. Eclampsia can be fatal. Aminatou bit her tongue hard while we were trying to improve her critical condition. Without treatment she could have died, like many others. To try to encourage giving birth in hospitals close to medical assistance MSF spreads the message among women during their prenatal appointments. It is also important to spread the message more widely, to try to sensitise the population to the issue so that consequences are really understood, before and after giving birth.” 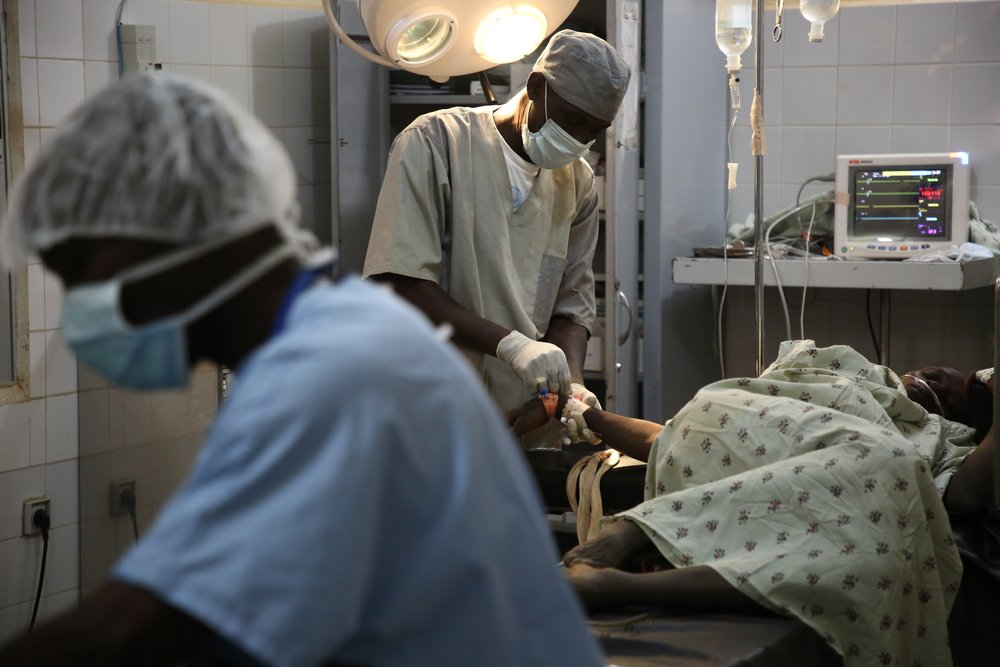 Seydou Camara/MSF
The operating theatre of the referral hospital in Douentza, which is supported by MSF through the provision of staff and equipment.

“I was really worried about whether or not she would survive”

Fatoumata is from a nomadic community in Dala, 5km from Douentza, in central Mali, and is a mother of five children. She was nearly dead when she arrived at the Referral Health Centre in Douentza. The MSF team stabilized her so that she was no longer in a critical condition.
“I accompanied my wife who was ill. We arrived at 11 o’clock in the morning, and she was completely unconscious. Her pains started around three days before that. She was telling me that her chest was hurting, but we didn’t immediately go to the hospital to see what was wrong. It was only when her health really deteriorated that we took a motorbike taxi to come to the hospital here in Douentza. When we arrived here at the health centre she was received by the doctors. She was no longer moving. I was really worried about whether or not she would survive. Several midwives took her to a room in their arms and I stayed outside the room. After a few moments the doctors asked me if I knew what was wrong with her, and I said no.
That was when they told me that my wife was pregnant, by around 5 or 6 months. No one in the family suspected it! Neither I nor she had realized that she was pregnant. The health workers told me that her illness was due to the pregnancy. Now her condition has improved and she is awake. From now on she will come here for her prenatal consultations.”
Aissata Koné, the MSF midwife in charge of Fatoumata’s recovery in the maternity ward in Douentza

“We asked Fatoumata’s companions whether they knew the reason for her condition, and they told us simply that she was unwell. So we examined the patient and realised that she was pregnant by about 5 or 6 months without knowing it, and that no one in her family knew it either. We explained to them the importance of coming to the health centre when she felt any pain. Fatoumata had delivered at home one other time and it didn’t go well. Fortunately with this recent pregnancy we were able to talk to her in time to let her know about the importance of prenatal consultations.”

our work in mali >