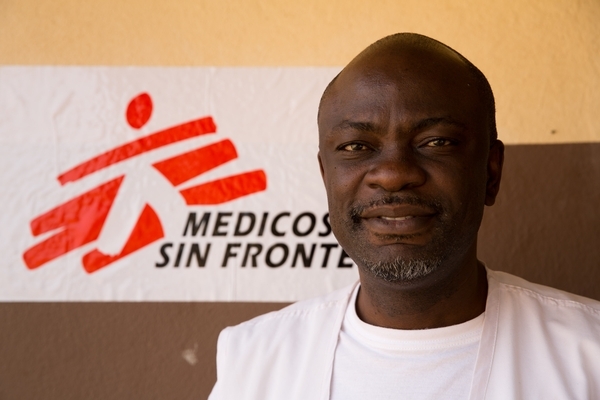 Mali: 'We stayed throughout the air strikes. We will not abandon our patients'

Dr Jose Bafoa has been in Gao for five months as MSF´s medical team leader. The volatile situation in the past few days around Gao has caused a decrease in the number of patients arriving to MSF facilities, but Dr. Bafoa says the priority for him and his teams is to continue providing care to their patients.

In the northern town of Gao, on average 120 patients make their way to the MSF-run Wabaria and Sossokoira health centres every day. Even though the rainy season is over, seventy per cent come with malaria, a parasitic disease that leaves sufferers exhausted from high fevers and uncontrollable shivers.

Dr. Jose Bafoa, MSF's medical team leader in Gao. Mali 2013 © MSF
Dr. Jose Bafoa, MSF
Despite the war, it is malaria that the medical teams are battling against. It remains the leading cause of death in the country, and for children under the age of five, it is particularly dangerous, with many succumbing to the disease.

"Since we started working in the health centres in September last year, we have generally seen a constant number of patients.

There was a dip in mid January during the air strikes and again this week we received fewer than 10 patients a day in one of our health centres following renewed fighting, but patient numbers consistently go back to normal when things calm down and people are less frightened of leaving their homes. In that particular health centre for example, we are now receiving an average of 60 patients again,” says Dr. Bafoa.

“Although there is a hospital and 10 health centres in and around Gao town, this is for a population of 400,000 and we realized that some people still had no access to medical care. And with the current insecurity, where people are on the move and often have even fewer means, giving them access to free and quality care is even more vital. So far we have attended to 16,000 patients.”

Fighting in the area

Since January 11, French and Malian forces launched an offensive against various armed groups operating in the North. In Gao, the most significant force is the Movement for Unity and Jihad in West Africa (Mujao), a splinter group of the better known Al-Qaeda in the Islamic Maghreb (AQMI).

“People fled in fear of the air strikes and reprisal attacks. Some went to neighboring countries, but others found shelter in small villages or in the bush where living conditions are harsh. So aside from malaria, we have seen an increase in the number of patients coming in with diarrhea and skin diseases due to the lack of hygiene, as well as an increase in cases of  acute respiratory infections caused by the dust and wind,” adds Dr. Bafoa.

“More patients are also coming in with high blood pressure and gastritis, likely due to the high levels of stress they have faced recently.”

The aim of MSF
The aim of MSF
The main aim of the project since its inception is to reduce mortality rates by increasing access to healthcare and emergency response. And indeed, Dr Bafoa explains that before the project was launched, there were at least one or two deaths per week in the three health structures supported by MSF in Gao*. Since October, they have only registered five cases.

100 kilometres further south, in the town of Ansongo, where MSF supports the referral hospital, mortality rates in the centre have also decreased from over 8 per cent less than three months ago, to 1.2 per cent today.

And in the vast desert areas of northern Mali, bringing treatment closer to patients is another essential aspect of the project. For the past four months, mobile teams have worked in remote areas, the rationale being that if patients can’t come to us, then we have to go to them. But, with fears of land mines on the roads, MSF has been forced to temporarily suspend its mobile clinics.

“Through our mobile clinics, we of course provided primary health care, but we also tried to ensure that pregnant women would have routine prenatal consultations. We do not know when we will be able to re-start them, but we hope it will be soon.”

MSF also supports other community health centres, supplying them with medicines and essential materials. As Dr Bafoa explains, “the main problem we face here in Gao and Ansongo is a lack of materials and good working conditions. So aside from giving training and support to local staff, we have also done a lot of work rehabilitating existing structures. In Ansongo referral hospital, for example, we re-established the electricity and running water, and we are now rehabilitating the operating theatre.”

“We need to be ready to respond to any medical eventuality, be it an outbreak, war wounded or people affected by displacement. I

n Ansongo, our teams went in in December to support the local hospital, and now we see some 100 patients per day. And although we have two Malian colleagues who were already here doing cesarean sections and providing other obstetric care, we sent a surgeon specialized in war related trauma.

Our patients tell us that all they hope for is peace. And we are with them; we stayed here throughout the air strikes, we will not abandon our patients now.

We hope that the health system will develop and eventually replace us. But until then, we will stay and ensure that the people of Gao and Ansongo continue to have access to quality and free health care”.

Dr. Jose Bafoa has worked for MSF since 1999. Before coming to Mali, he undertook missions in Uganda, Chad, and the Central African Republic, as well as in his home country, the Democratic Republic of Congo.

In Northern Mali, MSF teams work in  Gao, Ansongo, Konna, Mopti  Douentza and Timbuktu providing primary and secondary health care, surgery, and emergency response. MSF is also working in the south of the country, running a comprehensive pediatric programme (primary and secondary preventive and curative care) in the region of Sikasso. The medical humanitarian organization also provides care to Malian refugees in the neighboring countries of Burkina Faso, Mauritania, and Niger.

* Activities in the third health centre supported by MSF in Chabaria (140km from Gao) have been temporarily suspended due to security risks but the organization continues to send medical supplies.