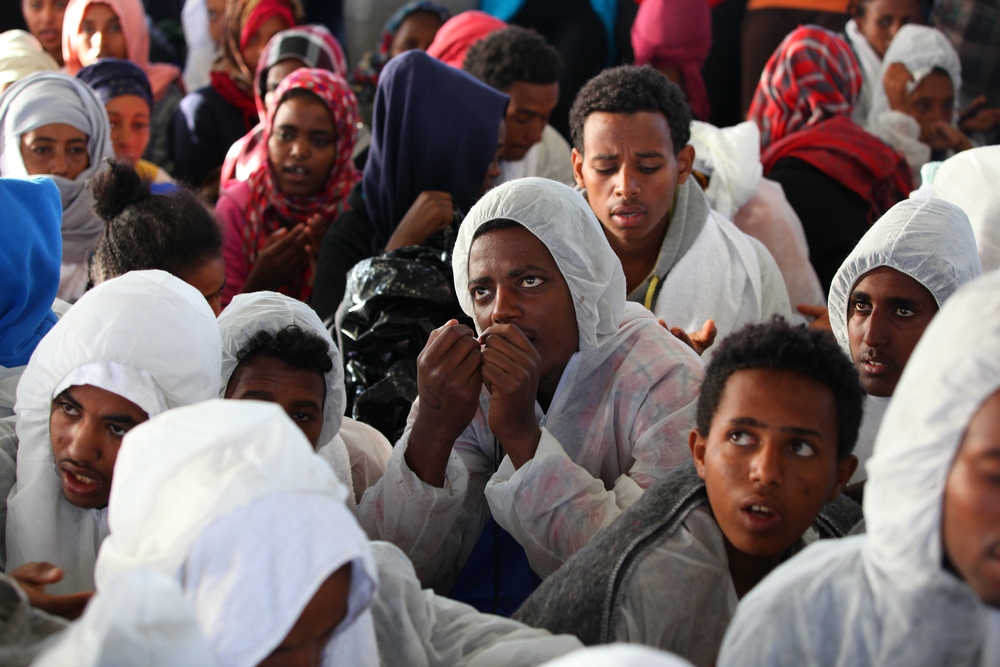 Mediterranean Crisis: "They are not numbers, they are people"

Full text of the speech, given by Lindis Hurum to the European Parliament on Tuesday September 15, speaking of those she met while working on-board the Bourbon Argos.

“If you take me back to Libya, I will jump back into the sea”.

The man in front of me is holding his arms around him, as if he hugs himself, and speaks in a low, but intense voice. His eyes are angry, afraid. He is dressed in black: black underpants, black t-shirt. That’s it. Nothing more. His clothes are wet from the sea and from the fuel of the boat. I see marks from cigarette burns on his arms.

I assure him we are going to Italy. Tell him my name, smile. Explain who MSF is. I can see he doesn't trust me. I imagine the horrors he has been through in Libya before getting on the sinking rubber boat we just rescued. I imagine, because I have seen this look and heard this story after ever rescue, from so many. “Libya is not a country, it is hell.” “They treat you like an animal”. “I took the risk to die at sea, because in any case I would die in Libya”.

Only after a few hours have I gained his trust and he tells me his name. “Johnson, from Nigeria.” 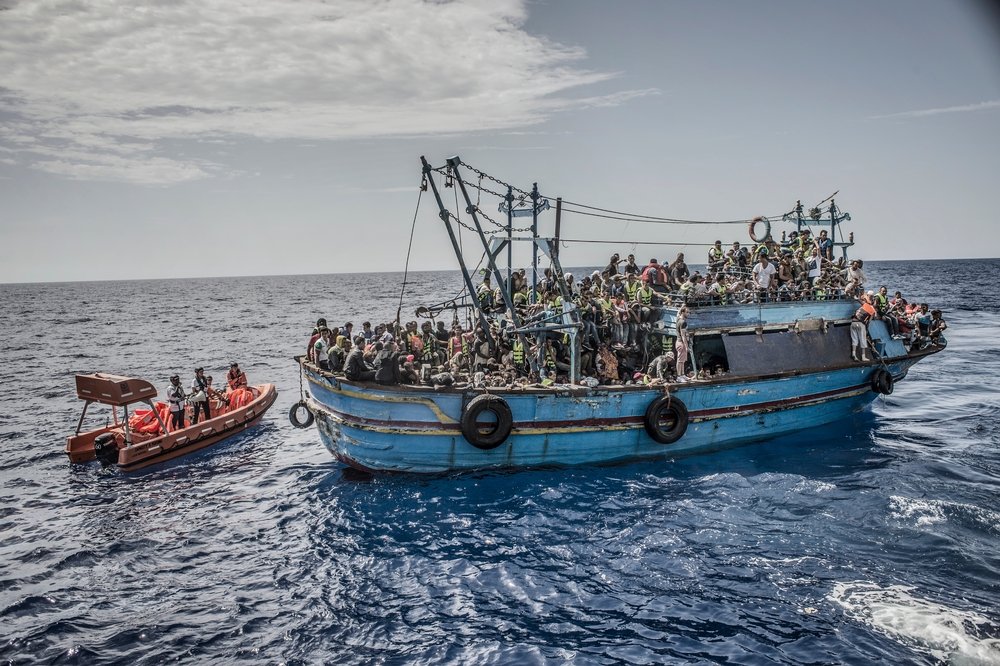 Francesco Zizola/NOOR
A boat containing approximately 650 people is rescued in the Mediterranean Sea by the Bourbon Argos and taken to Sicily, Italy on 26 August 2015.

In the same boat, without borders

There are many reasons why all the thousands of people we have rescued ended up in Libya, but they share the same reason for why they flee today: To save themselves from violence, torture, slavery, rape, prison. To save their lives. Fear and flight: the common denominators of everyone I met, no matter their country of origin.

Being on the MSF rescue boat the Bourbon Argos is a unique, mind blowing experience – different than anything else I have experienced in my nine years of working in humanitarian crises. The proximity with the people we rescue is overwhelming and beautiful, something often lost and forgotten in other projects on shore where we are caught up in our computers, meetings and reports.

On the Argos, it is impossible to create any distance between us and the hundreds of people we rescue onto our little boat in the middle of international waters. At that moment, we are literally all in the same boat, without borders.

Each member of my team was strongly touched by this experience; the contrast between the drama and intensity of the rescue operation and the extreme joy and relief when the desperate people in distress are all safe on board, hits you hard in the heart.

It is impossible to see them or refer to them as numbers - or even as migrants or refugees - after experiencing a rescue. They are simply persons, wholehearted and three dimensional human beings like me.

There is no ‘the others’ – there is only ‘us’. There were as many stories on the ship as there were persons, and we discovered each individual story little by little as we moved towards Italy: a journey of 48 hours, an ocean of time to get to know each other.

I must tell those stories because I believe they are the key to change the narrative of this crisis. Today I want to tell you, only by recognising yourselves in the people on our boat, will you get engaged for real and advocate for change. 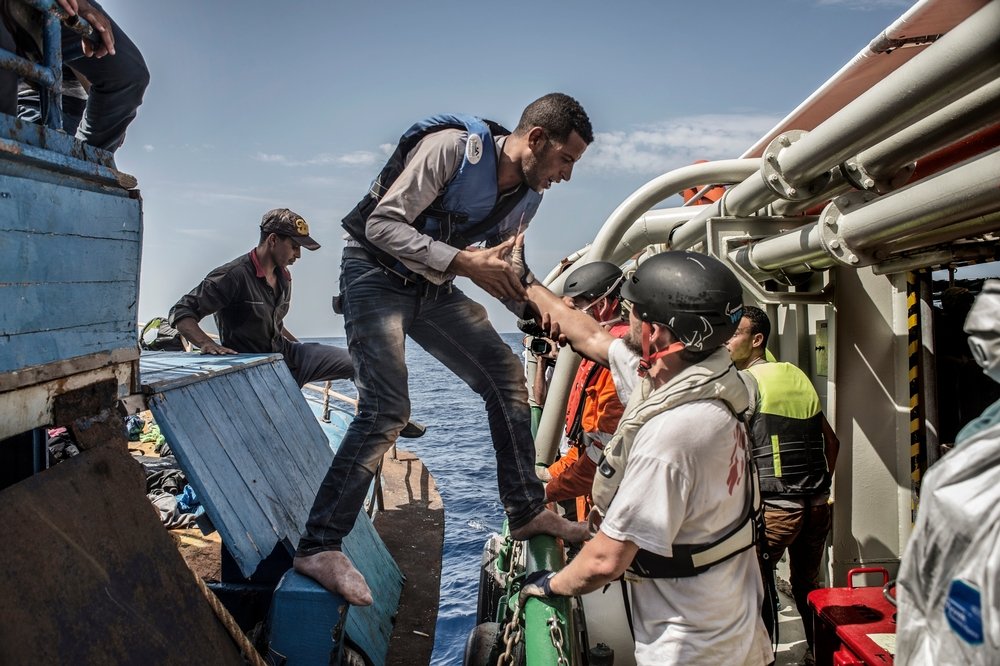 Francesco Zizola/NOOR
A rescue underway by the Bourbon Argos

Recognise yourself in Rosalin

Rosalin had a striped white and blue cotton dress, it looked a lot like the one I used this summer. It has a marine touch, it fits a trip on the sea. But Rosalind’s dress is wet not of seawater but of fuel and despite her smile she told me it burned her skin. I asked her where she is from. ‘Cote d’Ivoire’, she says. Then she becomes shy, and says in a low voice: ‘ I used to work with you. With MSF’.

Rosalind is a nurse assistant, one of those national staff pillars of any MSF project. She told me she used to work in the Bangolo project until 2006. I feel my mind spin, I have worked in Bangolo too. My first mission with MSF in 2006 was in Man, close to Bangolo. And we went there often, collaborated and exchanged.

But I never met Rosalind, but it doesn’t matter because I met her now and it was as if I knew her already. We immediately started talking about the others working in Bangolo, of foufou banan, of the seven mountains we both have climbed, of dancing ‘Grippe aviaire’ and of our common MSF experience.

Rosalind and her tall, handsome husband fled from Abidjan to Ghana in 2011 during the war. They don’t speak English, and found no job. They continued to the Democratic Republic of Congo (DRC). Her eyes changed as she said ‘It was not good either. We had to leave. Then there were only me and my man’. I didn’t ask details; her pain thinking of maybe a child she lost was visible. They have spent some months in Libya and she made that little noise with her tongue they often do in West Africa as she shook her head and looked away.

That little noise of dismay said it all. ‘It is horrible in Libya. You can’t imagine’. She was right, I really can’t imagine what it is like to have a life and a job, and then spend four years crossing Africa, survive several wars and then be rescued by the Argos.

To have nothing left but your husband and a striped dress. But still smile and hug me, saying the burns on her thighs are not too bad even though they really are and our doctor says she will need to go straight to the hospital. At least she is alive, she says. I really can’t imagine. 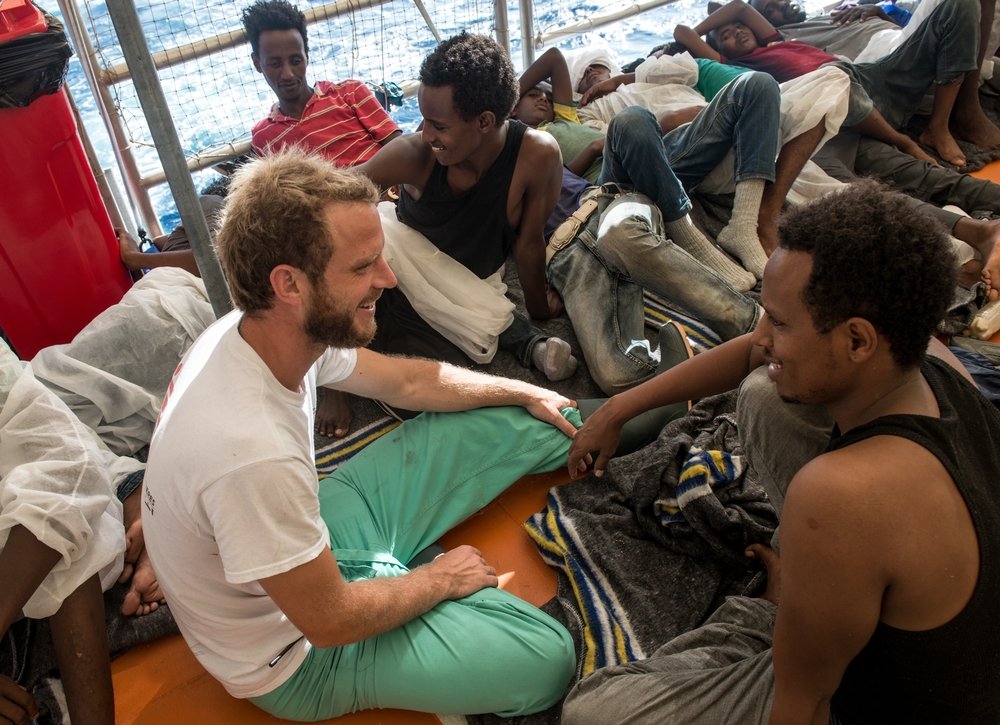 Gabriele François Casini/MSF
Will Turner, emergency coordinator on the MSF search and rescue vessel, the Phoenix, talks with people who were rescued on 2 September 2015.

Recognise yourself in Sako

He was my height, with a round face and crew cut hair with blonde spikes. His teeth were white as sugar. He had a blue hoodie and looked like a sports man. He is a sports man, he told me. He came to Libya in 2011 to play football, he is really good he claimed – his dimples popping out like exclamation marks to underline it. I had no doubt.

He is from Guinea, ‘the one with Conakry’. I told him I was just in Guinea, working with Ebola. He was very impressed, says he was happy to avoid Ebola as he was not in Guinea. Before I answered, he said what we both think: ‘But maybe Libya is not so much better than Ebola…'

He had been in Libya for five years, and he had seen it fall into lawless anarchy and violence. He said his uncle who brought him there, died. That his best friend was killed last year. He died after a child soldier, about the same age as him, hit him in the head with a steel bar. He didn’t die immediately; it took long time before he gave up. There are no hospitals.

‘Child soldier my age’. Suddenly it struck me how young he looked. ‘17’, he said with a big smile. My mind spun again. So he was 11 when he arrived in Libya? He is still a minor, even though he has seen and survived more than any man I know has experienced in a lifetime.

I explain how in Europe you are still a child until you are 18 and that if he wants, I will make sure he goes off together with all the other minors we have on board this time. I never saw as many as today, 74 children travelling alone. He nods. Looks down. Suddenly he looks like a child after all. 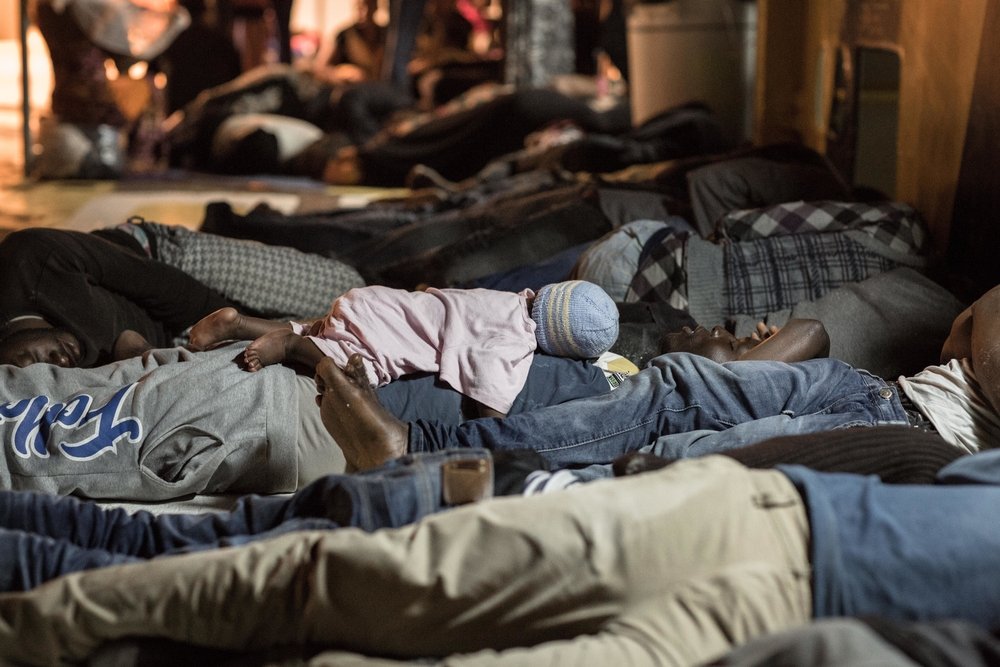 Christophe Stramba/Haytham Pictures
A Nigerian man and his baby rest on the deck of the Bourbon Argos after being rescued from an inflatable boat on 3 July 2015.

Recognise yourself in Diomande

‘You have a skin infection. Sometimes your skin itch no? Yes, so these people will take care of that and give you treatment. But they need to burn your clothes to kill the infection.’

No one in the Italian port where we disembark speaks anything but Italian, so I stayed close to the scabies treatment area to at least give basic information to the people about why they are stripped, sprayed with a white product and their clothes burned.

It is the same every time: the minute they leave our boat and step on shore, they become a number and are treated as if they had no feelings, minds of their own, stripped of dignity and humanity. Met by people wearing full protective equipment as if they all had deadly infectious diseases.

I asked  Diomandé, a young Ivorian man with a small moustache only men who have just started growing a moustache can be proud of, if he had anything in his pockets? As his clothes will be burned, he should take it out. He struggled to get something out of the small pocket within the bigger one in his jeans, the one I never understood the use of on my jeans.

I discovered his treasure as he unfolds it in front of me: a black and white picture, a bit faded but still in good shape. ‘It got wet on the boat, but I dried it in the sun. It is my parents’. The picture showed a tall man and a tall woman, dressed in their best Sunday clothes, carefully holding a baby in their arms as they pose for the photographer in front of the draped curtains of his studio.

‘Is it you?’ I asked pointing to the baby. He nodded with a smile, saying it is the only thing he has in his pockets. I knew he didn't have a bag. None of them came with any luggage. Or shoes. This is all he has in life.

The space to be fully human

Let me quote the former MSF international president James Orbinski, as I think it summarises the core of what our search and rescue operations are about and why we do not wear protective equipment, but meet those we rescue with a smile and a hand shake.

Why we think it matters to give each and every one at least 48 hours of humanity, of medical care and a safe sleep:

“Humanitarianism is about more than medical efficiency or technical competence. In our choice to be with those who suffer, compassion leads not simply to pity but to solidarity. Solidarity implies to demand a minimum respect for human life and to recognise the dignity and autonomy of others, and asserting the right of others to make choices about their own destiny.  Humanitarianism is about the struggle to create the space to be fully human.”