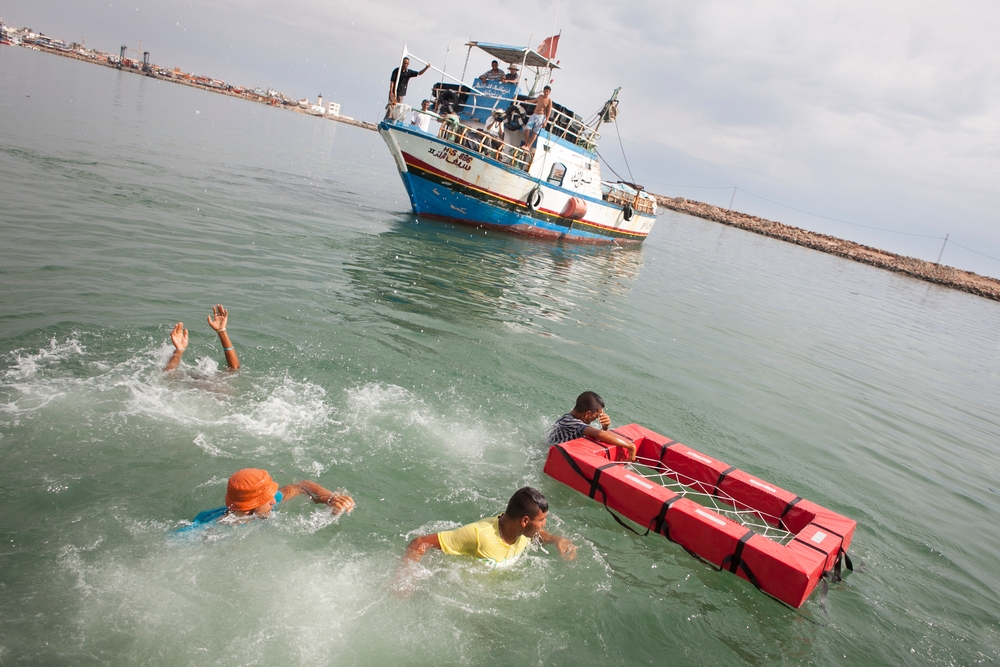 Mediterranean crisis: Training Tunisian fishermen to save lives at sea

In order to increase Tunisian fishermen’s capacity to carry out rescues at sea, Médecins Sans Frontières has carried out a six-day training with 116 local fishermen in the town of Zarzis.

MSF is also carrying out training for the Tunisian and Libyan Red Crescents, the Tunisian Civil Protection service and the Tunisian National Guard in dead body management and how to receive people who are rescued and brought to shore.

On 27 August, 200 people drowned when a wooden boat capsized off the coast of Zuwara, Libya.

The Libyan Red Crescent, who had recently been trained by MSF in dead body management, took care of the bodies and MSF provided infection control material.

Another boat, carrying 130 people, was on 30 August rescued by Tunisian fishermen, who had also received training from MSF in carrying out rescue operations. The 130 people were brought to Zarzis by the fishermen where they received medical support from the MSF team.

“Saving a sinking boat filled to the brim with desperate people who cannot swim involves a lot of risks and is a dangerous operation” says Wiet Vandormael, MSF’s training coordinator.

“The bodies of those unfortunate people who died at sea have to be cared for with dignity without endangering the health of communities.

"Through the exchange of experiences between MSF and the different Libyan and Tunisian people involved, we are increasing the capacity for assisting people in distress and handling the disastrous consequences. I was really touched by the motivation of the fishermen and the difficult situations they are facing.”

For years, Tunisian fishermen have been encountering migrant boats in distress and have saved lives by rescuing people onto their fishing boats.

Most of the people trained by MSF are fishermen who navigate smaller boats with only a small crew, although some also navigate larger 40-metre vessels and go out in the open sea for several days.

Albert Masias/MSF
ABDESSALEM TRIKI (Fisherman) "Sometimes I've been forced to jump into the water to rescue people, leaving behind my boat. I know this puts me at a big risk but I can not let someone drown in front of me without doing anything. Normally we take them to our boats and we take care of them. Sometimes they are in very bad physical state, we give them food or cook something hot. We lose money and work there, but we have to do it."

The steps in a search & rescue operation

The training has familiarized the fishermen with all the steps involved in a rescue operation. They have been taught how to communicate with the people onboard as well as how to contact the Maritime Rescue Coordination Centre in Italy to call for additional support.

They have also been provided with - and taught how to use - adequate security- and rescue equipment such as protective material and clothing and life vests, as well as how to prevent contact with body liquids.

“On one occasion we found a small boat full of people, which was already sinking” says Yanes Bechiryanes, a mechanic onboard a Zarzis fishing boat.

“We could not leave them in such a situation and called for assistance from two other fishing boats which we work with. We rescued and distributed the people amongst the three boats.

"They were very scared and we had to calm them. We are losing hours of work and therefore money, but they are human beings and we have an obligation to help them.”

An increasing number of smuggling operations

The Libyan coast has become a major smuggling hub for people attempting to cross the Mediterranean to reach Europe. Increasingly, fishermen encounter boats that are in much worse conditions than before, and are much more prone to sinking.

Albert Masias/MSF
NOURDIN ACHOURMTENT (Fisherman from Zarzis) “Increasingly we find more and more refugees and dead people at sea About five years ago the first twelve dead bodies were washed up onto the beach and we had to bury them."

With the increased number of smuggling operations in Libya, fishermen have also told MSF that they are reluctant to go close to Libyan waters, as they fear getting their boats attacked and hijacked by people smugglers.

“We find more and more refugees and dead people at sea” says Nourdin Achourmtent, a fisherman from Zarzis. “About five years ago, the first twelve dead bodies were washed up onto the beach and we had to bury them.

"We have even discovered dead bodies in our fishing nets. We bury the people in the best way we can.”

The exact number of people who die crossing the Mediterranean will never be known, but at least 2498 people are confirmed to have died this year.

“Tragedies at sea will continue to regularly occur as people are desperate to flee to Europe” says Vandormael.

“Search and rescue helps save lives but is not a long-term solution. The European Union needs to create safe and legal ways for people to reach Europe so that they don’t have to risk their lives during the journey.”