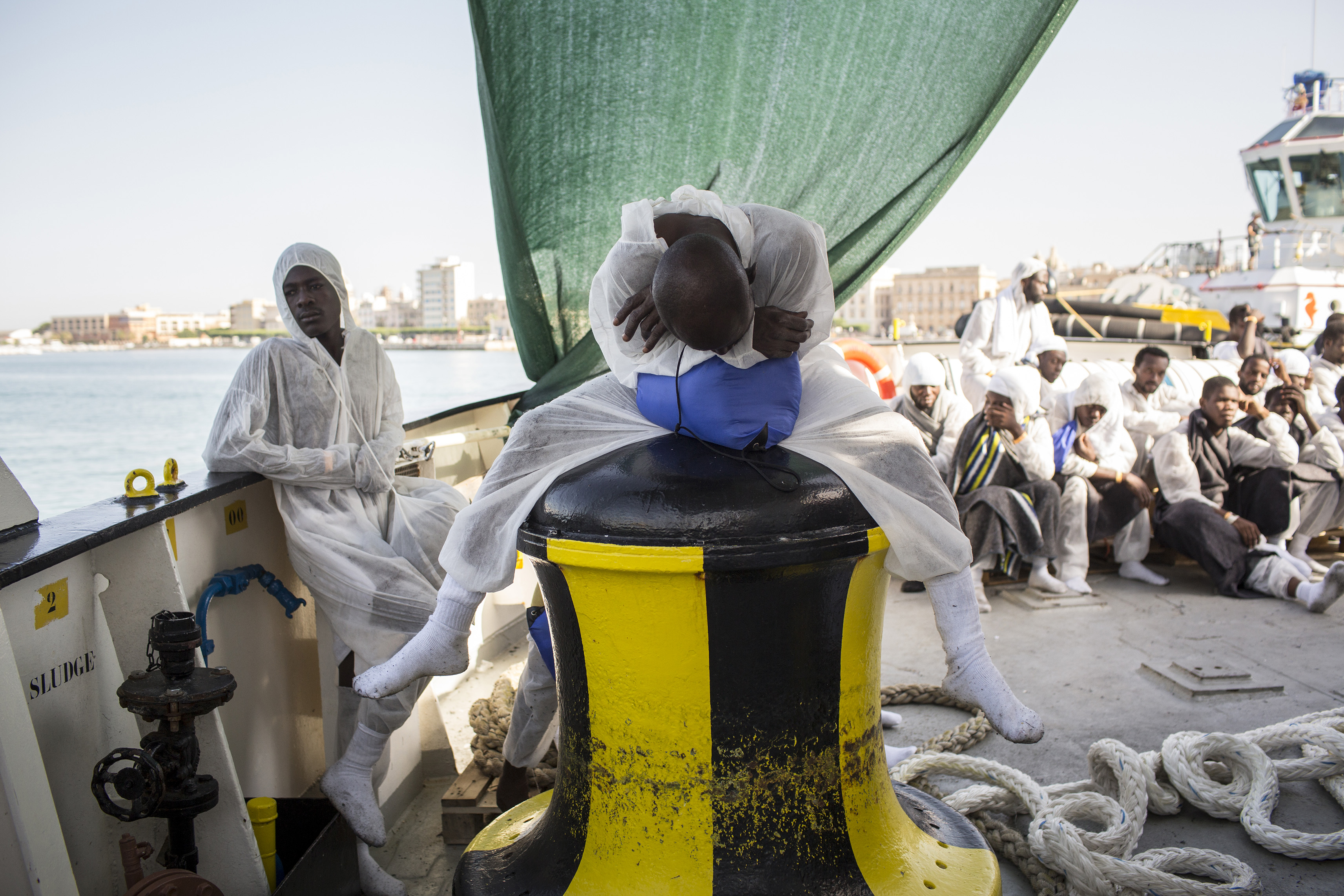 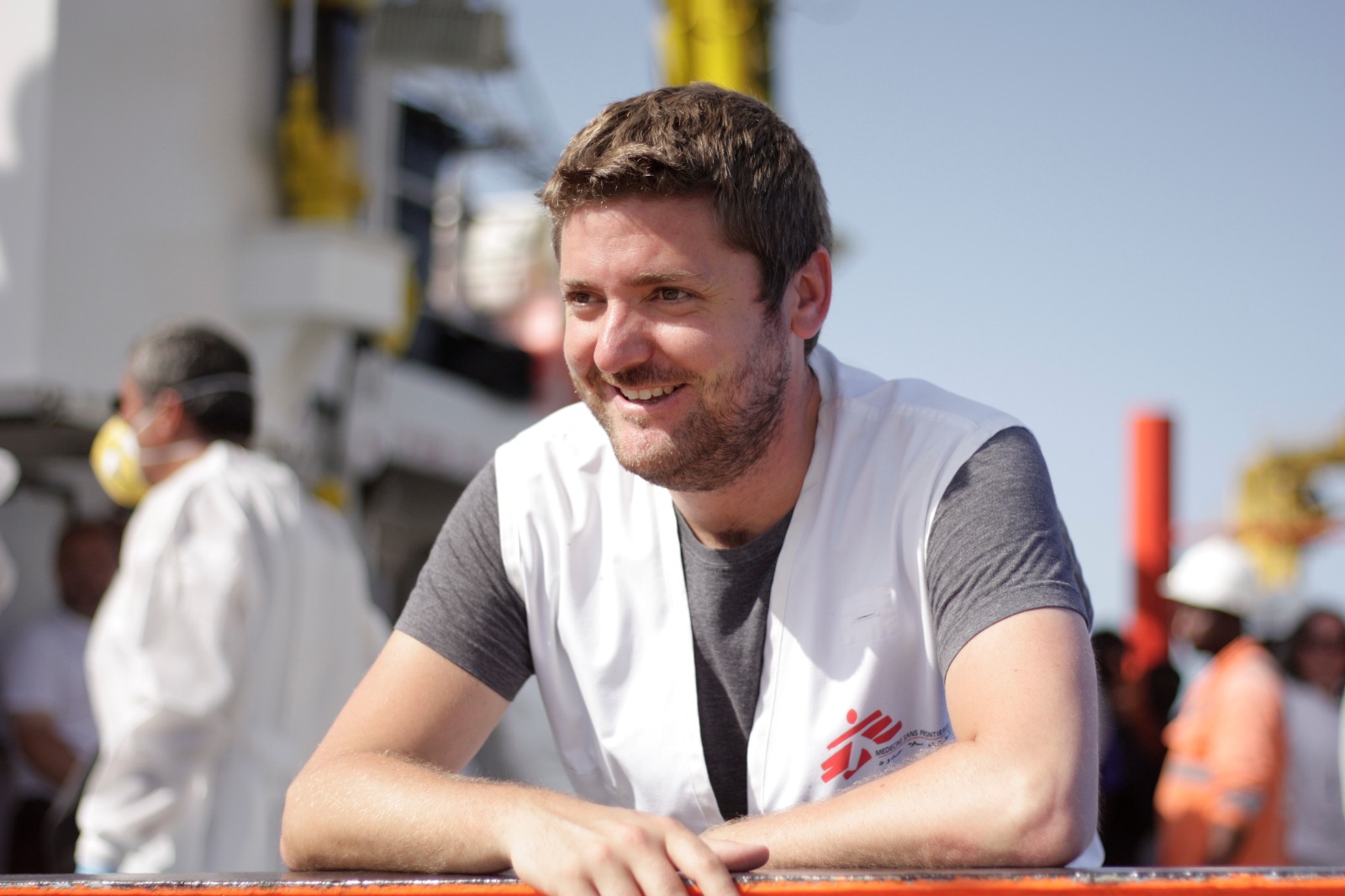 "The Mediterranean is a giant watery cemetery."

Working on a search and rescue vessel in the central Mediterranean can be an uplifting experience at times, as exhausted and often traumatised people slowly begin to come back to life after being rescued.

In clinics on board the three ships run by MSF this year, bones are set, wounds treated and babies born. Out on deck a commotion of song and dance often takes place. This contagious release of joyous and relieved energy broke out regularly during my time on board the MV Aquarius.But on far too many occasions there is an altogether more solemn mood on board MSF’s search and rescue ships, which patrol the sea off the coast of Libya. For this has been the deadliest year on record for people fleeing across the Mediterranean. 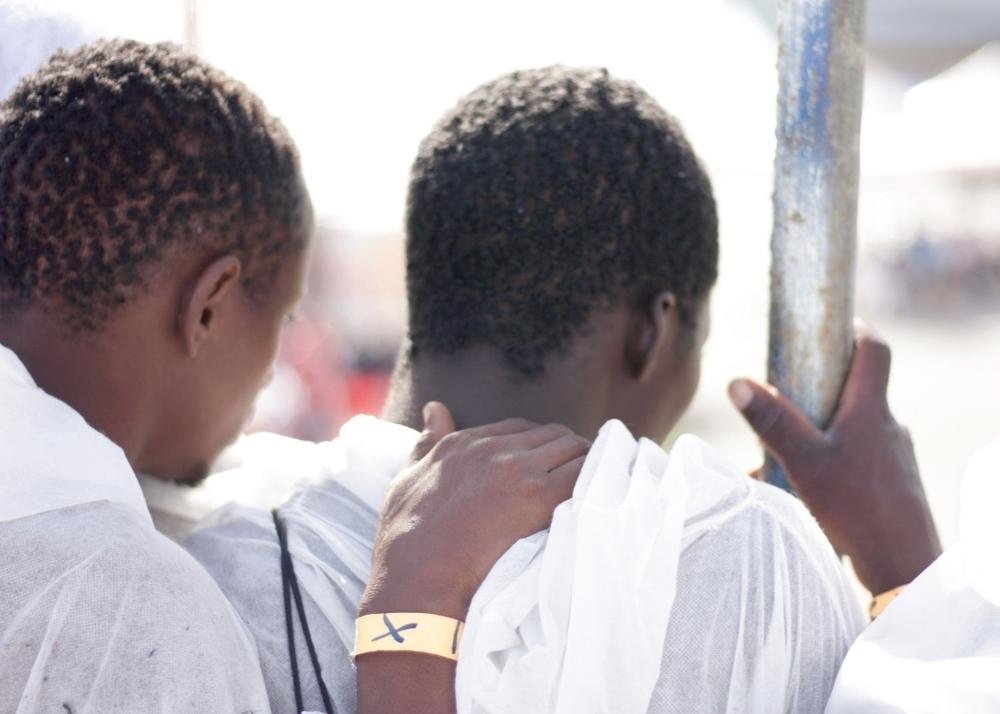 Donal Gorman/MSF
MV Aquarius disembarks 209 people and the dead bodies of 21 women and one man in Trapani, Sicily on the 22nd July 2016.
On the evening of 20 July, the MSF team rescued two rubber dinghies in distress. This time there was no singing or dancing on the deck. Nor was there a palpable sense of relief. Just a heavy stillness as our medical team went about their usual rounds of giving care to those who needed it.
As we headed due north towards Italy that evening, on deck rested 260 rescued people from across sub-Saharan Africa. Towards the bow lay 22 dead bodies. Under the shadow of the netting put up as protection from the heat of the afternoon sun, and zipped up in body bags, 21 young women and one man lay side by side.

"Frozen in time, the expressions on their faces all displayed the panicked horror of a death by drowning or asphyxiation."​
DÓNAL GORMAN​ MSF COMMUNICATIONS MANAGER​

Retrieving their bodies had been tough. One by one, slowly and carefully, the dead were recovered from the bottom of the boat, from the pool of fuel mixed with seawater into which they had slipped. A nightmarish scene, and one which I will never forget. They had succumbed to the toxic mix after inhaling it deep into their lungs during their final gasps for air, while trapped under the weight of a mass of people above. 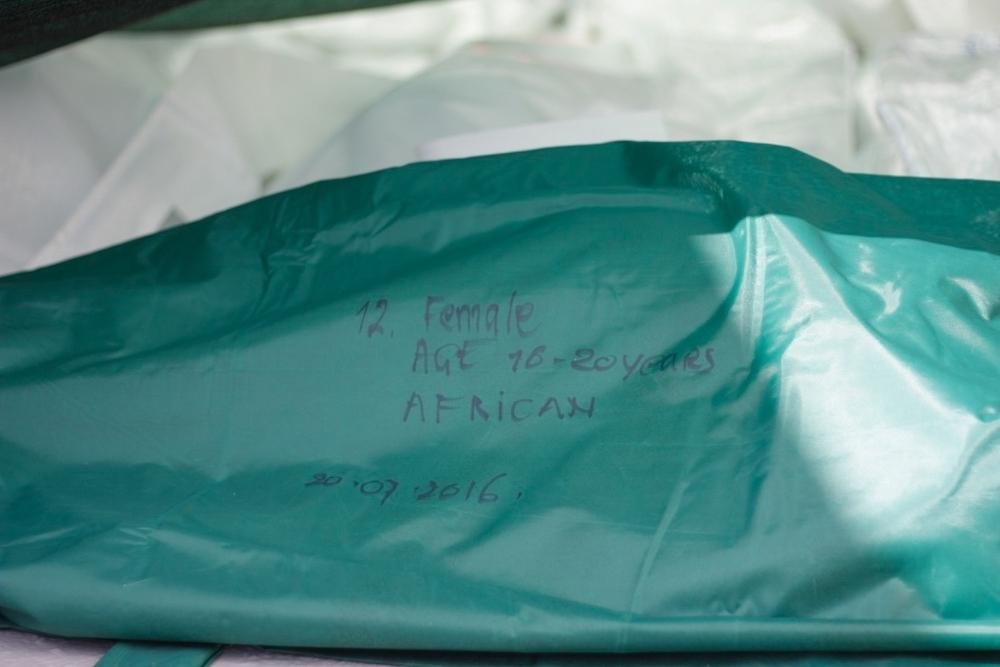 Alva White/MSF
Body of one of the 21 woman who tragically died being laid to rest.
As I walked among the survivors that day, I spoke with a young man from Cameroon who was devastated after losing his sister. Another man had lost his wife. For one young woman survivor, this tragedy was just the latest in a long series that had unfolded since she was forced to leave her home in northern Nigeria. In Libya, she was taken into arbitrary detention by an armed group and subjected to sexual violence and severe beatings while working off debts to take this doomed dinghy for Europe.

Unfortunately, the event of 20 July was far from a one-off. In a year when our teams have rescued 19,708 people, at least 5,000 others have drowned or gone missing at sea. This number is likely a massive underestimate, and there are almost certainly many more bodies lying at the bottom of the sea or bobbing around in silent ghost ships that we will never know about.

On our boats, we speak to everyone who we rescue. Most survivors have a story of hardship in their countries of origin. But what everyone has in common is a horror story from Libya. No matter their reason for being in Libya in the first place, the violence and mistreatment that they suffer there means they simply have to get out.

Men, women and, increasingly, unaccompanied children (some as young as eight years old) living in or travelling through Libya are suffering abuse at the hands of smugglers, armed groups or individuals who exploit the desperation of those fleeing conflict, persecution or poverty. 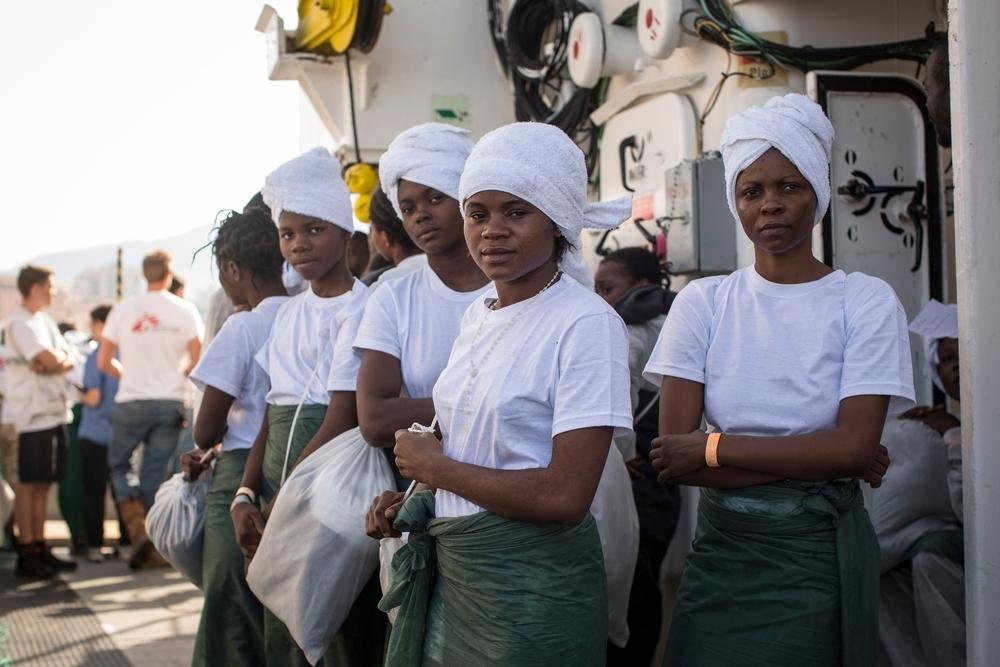 anna psaroudakis/SOS Mediterranee
The search and rescue vessel, a partnership between MSF and SOS Méditerranée, responded to a boat in distress on 20th July 2016.
The abuses we hear of from those we rescue include being subjected to violence (including rape of both men and women), kidnapping, arbitrary detention in inhumane conditions, torture and other forms of ill-treatment, financial exploitation and forced labour. More than half of those we have spoken to were detained arbitrarily in Libya, while four in five experienced traumatic events, including violence.

"The Mediterranean is a giant watery cemetery and it is being filled with people who are dying unnecessarily.​"
Dónal gormanmsf communications manager, IRELAND

But instead of providing safe and legal alternatives to the sea crossing, or welcoming people in a dignified and humane manner on European soil, the EU and its member states have instead chosen to harden their policy on deterring migrants and refugees."

As long as there are no alternatives to the sea crossing, ever more ruthless smugglers will continue to pack more and more people into worse quality boats, and the number of deaths at sea will grow.​

Europe is far from the top destination for the world’s refugees and other migrants. The top hosting countries for refugees, according to the UNHCR, are Turkey, Pakistan, Lebanon, Iran, Ethiopia, Jordan, Kenya, Uganda, Democratic Republic of Congo and Chad, which together provide refuge for more than half of the world’s refugees. Not one of these countries is in Europe. Europe has received only a tiny percentage of the world’s refugees but continues to focus on creative ways to keep people in need out, rather than take them in.

We are an organisation of medical professionals who specialise in providing care to people in the world’s conflict zones and responding to epidemics and natural and manmade disasters. We shouldn’t have to be at sea at all – but we cannot sit back, on dry land, while people continue to drown in such numbers. 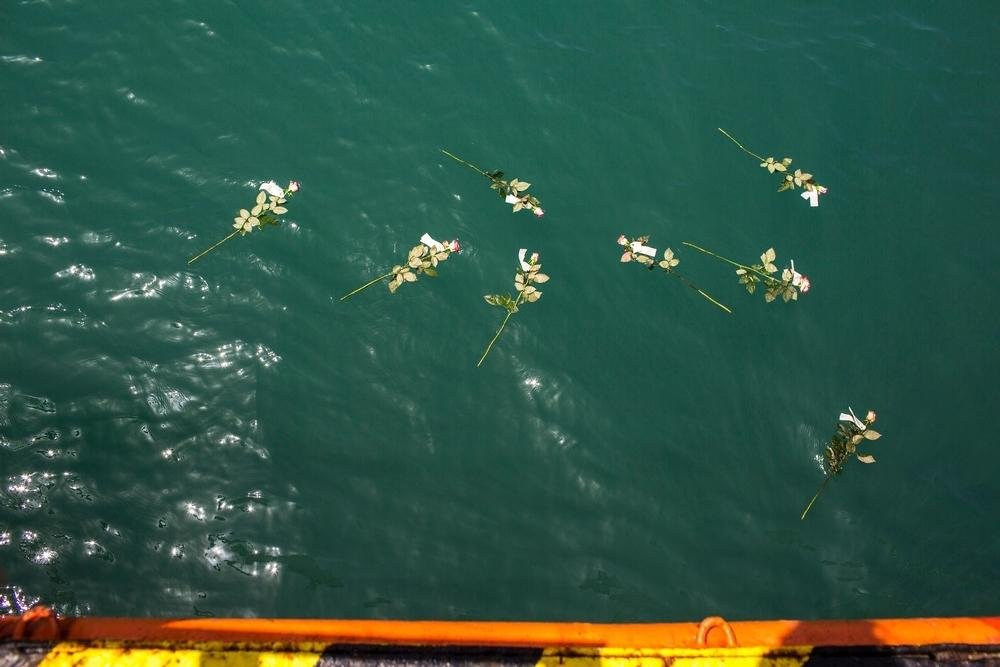 anna psaroudakis/SOS Mediterranee
MSF and SOS Méditerranée take a moment to remember those people who lost their life by saying a few words and dropping roses into the sea.
Since we launched our first Mediterranean search and rescue vessel in April 2015, we have rescued and assisted more than 39,000 people. Humanitarian action is not the cause of this crisis, as some have suggested lately, but a response to it. But even as we respond, we also know that search and rescue operations aren't the answer.

Safe and legal ways for people to reach a place of protection are urgently needed, as people continue to flee war, persecution and poverty. We’ve been calling for this since the start of our lifesaving work at sea. But, as long as safe and legal ways fail to exist, we will be there, actively patrolling the ‘rescue zone’ north of Libya. We will be there throughout this winter, as the waves get bigger and conditions deteriorate, in an effort to save more lives and prevent more unnecessary deaths.

more about search and rescue operations

An edited version of this piece was published in The Irish Times.