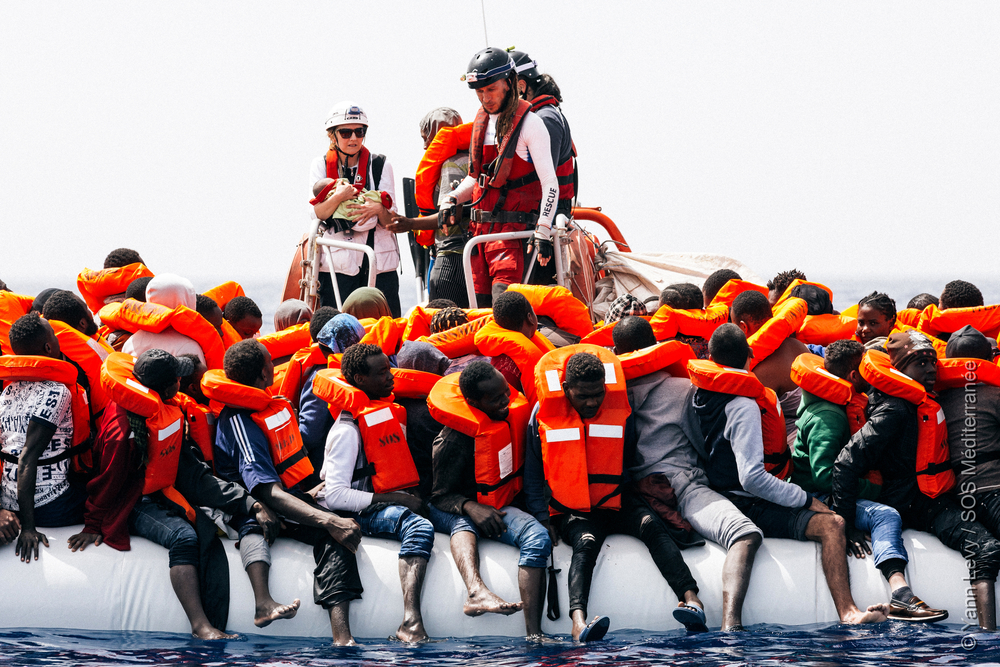 On Sunday 1st April at 10.32am the search and rescue ship Aquarius – operated in partnership by MSF and SOS MEDITERRANEE – along with the Libyan coast guard, were alerted by the Italian Rescue Maritime Coordination Centre (IMRCC) to a rubber boat in distress with an estimated 120 people, in international waters 23-24 nautical miles from the Libyan coast.

The rubber boat was first identified by a European military aircraft. While the Aquarius arrived on scene first, at approximately 11:00, we were informed by the IMRCC that the Libyan coast guard would be in charge of the rescue and as such the Aquarius was instructed to standby and not engage.

While on standby, the Aquarius witnessed a deterioration in the situation, with the overcrowded rubber boat taking on water. By 12:45 MSF and SOS MEDITERRANEE were able to negotiate with the IMRCC, Libyan coast guard headquarters and Libyan coast guard vessel on its way to the scene, to allow the Aquarius to stabilise the situation by giving out lifejackets to all people on board, and to assess their medical conditions.

The MSF nurse on board the Aquarius fast speed rescue boat (RHIB) identified 39 medical and vulnerable cases – including one newborn, pregnant women, children and their families – who were evacuated to the Aquarius.

While we were able to negotiate the evacuation of 39 vulnerable and medical cases to the Aquarius, out of concern for the safety of the 253 people already on board from the past two rescues, and the Aquarius crew, we were unable to complete the rescue.

MSF reiterates again that Libya is not a place of safety and under no circumstances should refugees and migrants be returned there. MSF continues to call on European Governments to prioritise the safety of refugees and migrants rather than actively enforcing policies of deterrence and containment in Libya. MSF refers to the Dutch minister of foreign affairs who after her visit just last week stated that the situation in the detention centres is inhumane and they should be closed as soon as possible.