Mexico: 72 Hours at a shelter for Migrants and Refugees

Monday morning. It’s the same routine at La 72, a shelter for migrants and refugees on the outskirts of Tenosique, Mexico, near the Guatemalan border. Everyone is up at six thirty for general cleaning. Then, personal hygiene until eight o’clock, and between eight and eight thirty waiting on line for breakfast. Then, waiting for the entrance gate to open.

On the round patio benches sits Abraham, a 40-year-old Salvadoran, recently deported from the US—the country he’d lived in since he was 18. He explains how deportation from the United States is a dead-end situation for citizens of El Salvador.
Abraham knows more about Houston, Texas, than the neighbourhood where he was born in El Salvador. He had worked for the same construction company in Houston since 1998. He has more family in Houston (mother, cousins, uncles), than in El Salvador and has his own family there; his two daughters, aged 16 and 14, were born there. He was arrested when police came looking for a relative who had been involved in a serious traffic offense. The police ended up at Abraham’s house and asked for his papers. A deportation order soon followed and Abraham found himself on a plane with another 150 Salvadorans last December, back to a country he no longer recognized as his own.

Depending on the neighbourhood, you cannot leave if you are not from there, they control you all the time, even the police seem to be involved in the ‘clicas’ (gangs), the gang members drive by on motorcycles, controlling,” said Abraham
Abraham, a 40-year-old Salvadoran

“Only a few days after arriving, they called me on the phone, they told me my name, they knew where my family was in the United States, how long I’ve been there, and they gave me 24 hours to collect $2,500 and if I didn’t...” Abraham didn’t even give them four hours. As soon as he received the message he was on his way. His goal is no longer to reach the United States, he said. “I cannot enter, it’s better that I stay in Mexico, seek asylum here,” Abraham said. “Maybe I can start a taco business and in five years my oldest daughter, who will be 21 years old then, will be able to claim me.”

Abraham explains his situation, resigned to the fact that he cannot go South because the gangs will find him and he cannot go North without the risk of being deported again. Mexico is his destination. 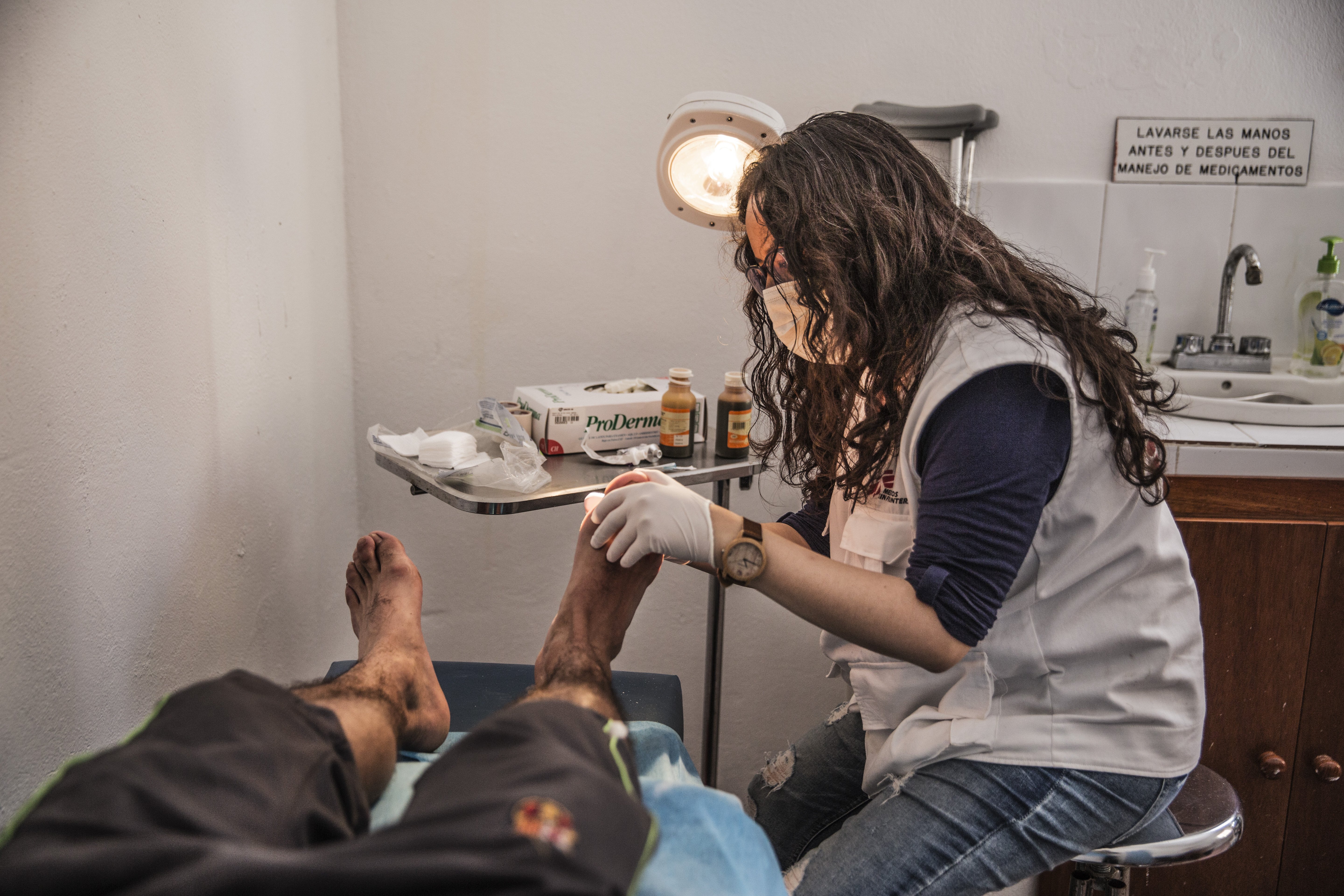 For many, no longer a transit point

Mexico is the desperate destination of thousands of Central Americans whose primary objective is not to reach the United States, but to flee from a homeland they can no longer call home. “Mexico is no longer a transit country,” said Karen Martínez, social worker with Médecins Sans Frontières, which has a team at the La 72 shelter.

Many of them leave because their lives are in danger and after having sold or bartered away their house or farm, may be some relatives have given them money. what they want is to stay here, after leaving danger behind.
Karen Martínez social worker with Médecins Sans Frontières

As migrants make their way North, shelters like La 72 are small oases in which to recover, find information,  and access a computer or a phone to contact family. La 72 is near the tracks of a train to which—with ever greater difficulty—those who do not have the money for a bus, cling to in the hope of more quickly traversing an enormous country. The train can take them to Mexico City, to Monterrey, or wherever there is a family member, a friend, a job opportunity. For those still wanting to go to the United States, it gets them closer.

Alex is in crutches. He is 29 years old and is from Honduras. He is nervous today, because he is waiting for his wife, who is going to cross the Guatemalan border into Mexico. He uses crutches, “because I was on the train, climbed up, and there was a checkpoint and the security guards started throwing stones at us to make us fall. I managed not to fall due to that, but I didn’t see the branch that was approaching. That made me fall.” Alex is a veteran of this route—this is his fourth trip North, all unsuccessful. In 2014, he says, it was the feared Los Zetas, who stopped their journey.

I was in San Luis Potosí,” he said. There were about 15 of us, they grabbed us all, and kidnapped us. They beat us. They left me for dead, they left me wrapped in duct tape on the train tracks.
ALEX, 29 yr old from honduras

Los Zetas is one of the cartels responsible for the massacre of 72 migrants in San Fernando, Tamaulipas, in 2010, due to rivalries between cartels for control of the migration routes. In following years, 193 more corpses were found in more than 47 mass graves in Tamaulipas.

This is why the shelter in Tenosique, managed by the Franciscan Order, is called La 72. The shelter serves as a tribute and as condemnation of the violence to which migrants are exposed to on the route. They flee from the violence of their countries of origin and violence follows them.

It’s nine o’clock in the morning and they open the La 72 gate. Some people have to organise their papers or buy something, talk to someone from their consulate, or go to the city centre. Many stay, waiting to receive a call or for some internet time. Some see the psychologists, consult the MSF doctor or get more information from the hostel volunteers. Alex hopes that his wife can cross the border. He hopes that someone from the shelter where she and her two children are on the Guatemalan side can accompany them, and that from the Mexican side they can also go and look for her. They hear so many things. “It’s a dangerous part, they say they rape women,” said Alex.  “She’s 25 years old and my daughters are 8 and 6 years old.” 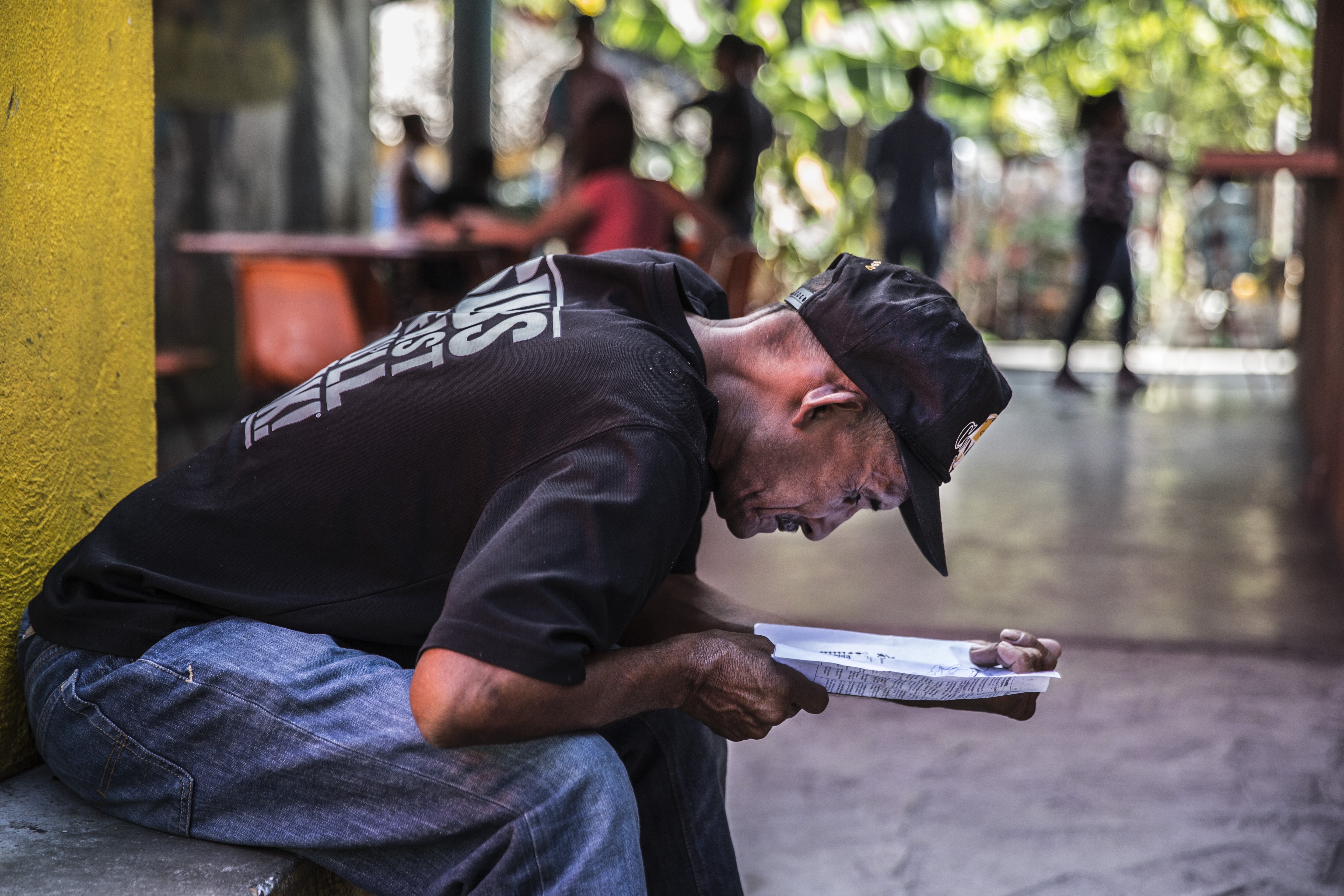 The waiting periods can be long at the shelters.

Guadalupe, a mother of five from Honduras taking shelter at La 72,  was a victim of the danger at the border between Guatemala and Mexico in Tenosique. Guadalupe is separated from her husband because he was abusive. She explains that she was forced to leave her country when gangs started “eyeing”  her eldest son, aged fourteen years. Guadalupe noticed that her son, “a shy, humble kid,” suddenly became rebellious. “The 18 gang wanted him to stand guard for them. That’s why I left  with the children.”

They crossed the Guatemalan border into Mexico at dusk, on foot.

“The three older ones were walking ahead and I was with the two little ones, aged eight and five years. Suddenly three men appeared. One started touching the girl. I got on my knees and begged them not to do anything to her. They grabbed me by the hair, and took me out of the way. I had to do it, with my mouth, to two of them...What hurts me the most is that my children were there, in front of me.” Guadalupe, after having been at La 72, no longer plans to go further North, but to stay in Tenosique and help other migrants, other women.

Tuesday, midday. In the morning, cooking tasks begin. Groups of young people, newcomers, their eyes still on the road, have not left for Tenosique, they have to save their money. They talk, play, make plans, laugh. The children, many of them, help the adults withstand the boredom. They play with anything, get in trouble, and seek constant attention. “In recent months we have detected an increase of entire families fleeing, women and children,” said Ramón Márquez, director of La 72. “The lack of protection and vulnerability of the migrant and refugee population has risen in this group and the violence that previously preyed on young men now also affects them.”

Candy Hernandez, an MSF doctor, explains the kind of medical care MSF is providing.
“We see what you might expect from people on the move; sores, dehydration, fevers. But we also see the terrible effects of the violence of the gangs that attack them on the way in order to rob them; machetes, beatings, abuse and sexual violence. Cruel and inhumane stories.” 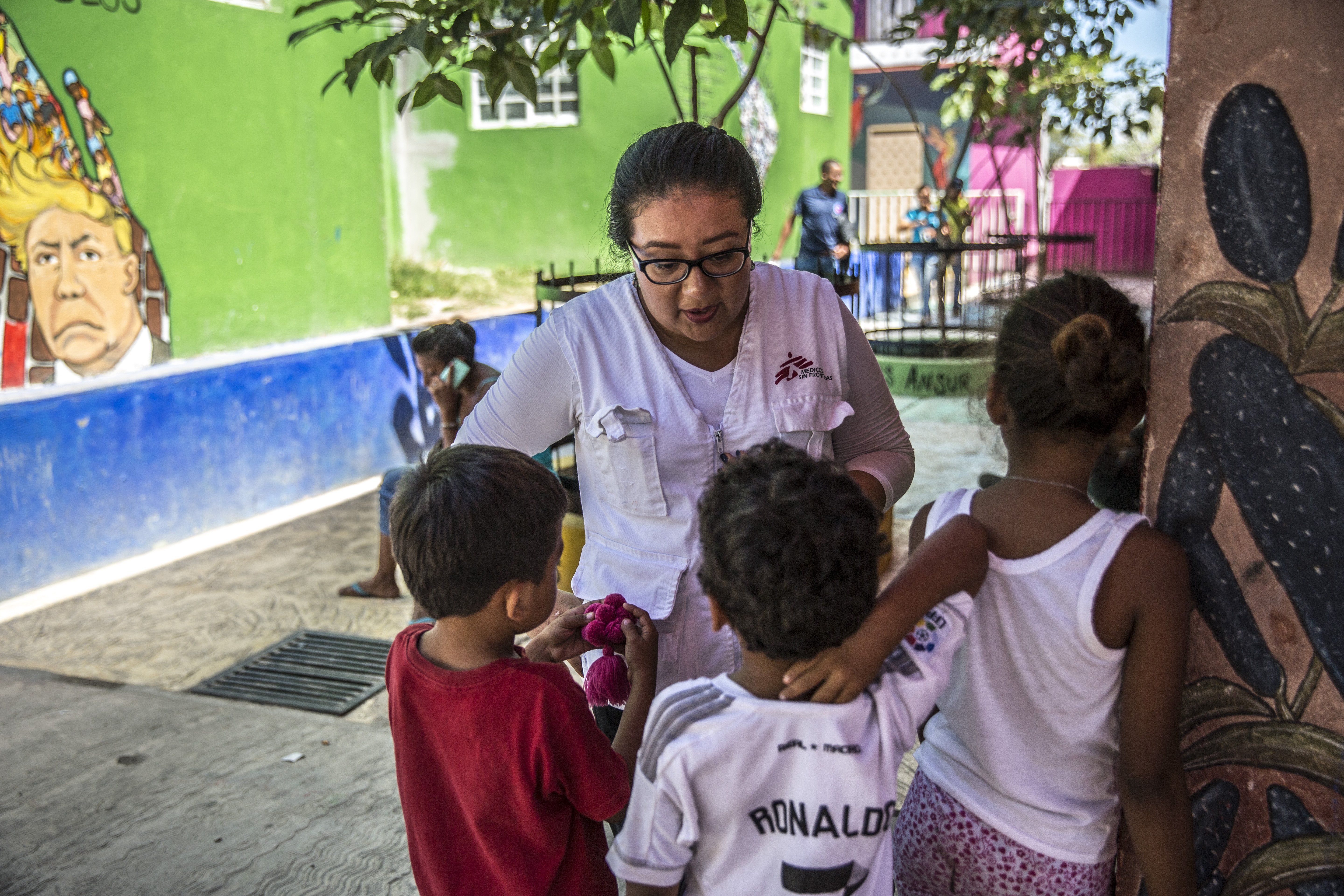 At one o’clock, the cleaning tasks are resumed, there are many people (the shelter has an official capacity for 250 people) and they have to work together in order to keep the space clean. The person in charge of the centre, Fray Tomás, goes to the vegetable garden he started, and which will help keep some roaming mouths full. Some leave, but others soon arrive. At about two o’clock, an orderly queue is formed for food.

Wednesday afternoon. After lunch, tasks resume, clothes are washed in shifts, and people wait to be called loudly to run to the phone and listen to a familiar voice. And when the sun stops shining so brightly, they go out to the field next door and enjoy a game of football, the local team against a team of migrants.
Although at first sight there is no evidence of rejection of the migrant and refugee population in Tenosique, Márquez warns about “the increasingly normalised discourse criminalizing migrants and  refugees. This “is very dangerous in a country like Mexico,” Márquez said. “It is not prepared, does not have resources, trained staff and is without a strategy to face this phenomenon of people escaping violence who continue to encounter violence on the road and in Mexico itself.

MSF is warning of the consequences of a hardening migration policy on those affected by violence in Central America. The tightening of the policy also comes in the shape of a possible agreement between the United States and Mexico to process asylum applications only in Mexico, rather than upon arrival in the US, preventing the Central American population from reaching the US before seeking protection to which they are entitled under international law.

In 2017, more than 100,000 people from Honduras, Guatemala and El Salvador began proceedings to gain asylum in the United States. Mexico is not a safe country for them and it is not equipped to provide medical attention and protection to a population fleeing violence. Forcing people to stay there is condemning them to yet more violence
Bertrand Rossier, General Coordinator of MSF in Mexico

Those who were in the village are returning to the shelter.The game has been over for a while now. The newcomers, their eyes wide open, as if they cannot believe they had crossed the border and are safe for the time being.  After being registered, they soon join the routine. At seven thirty, dinner is served. Nine o’clock is bedtime.