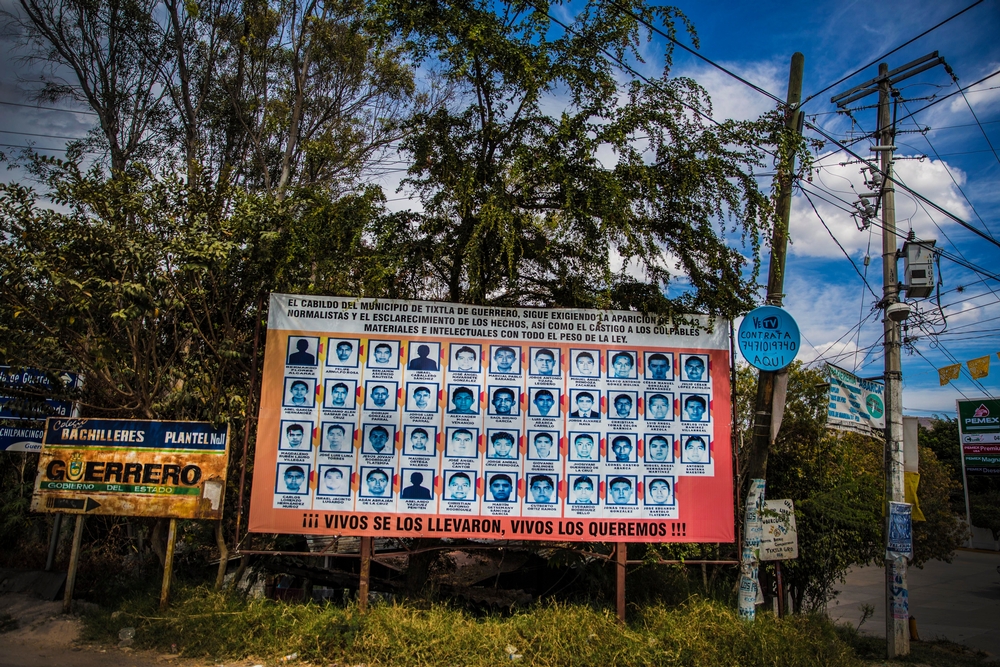 Mexico: Life is standing still for the 43 families of Ayotzinapa

Since October 2014, Médecins Sans Frontières/Doctors Without Borders (MSF) has been providing psychological support to the families and classmates of the 43 missing students from the teacher training college in Ayotzinapa

The playing field is deserted of people. There remains some bookshelves, a few tables, the protest banners, the screenprinting plate, the altar commemorating past students who have died, the 43 seats occupied only by the photos of the missing students.

A Christmas tree is still standing, also suspended in time, decorated with pieces of paper, photos and messages from the children, siblings, spouses, partners and cousins of the students gone missing the infamous night of 26 September 2014.

For six months there has been no news of the 43 young students from the Rural de Ayotzinapa teacher training college in Tixtla (Guerrero), after they were assaulted by local police in the nearby city of Iguala.

Since then, their families have not stopped looking for them, without losing hope that they are alive, and refusing to let their children be added to the long list of missing people in Mexico. 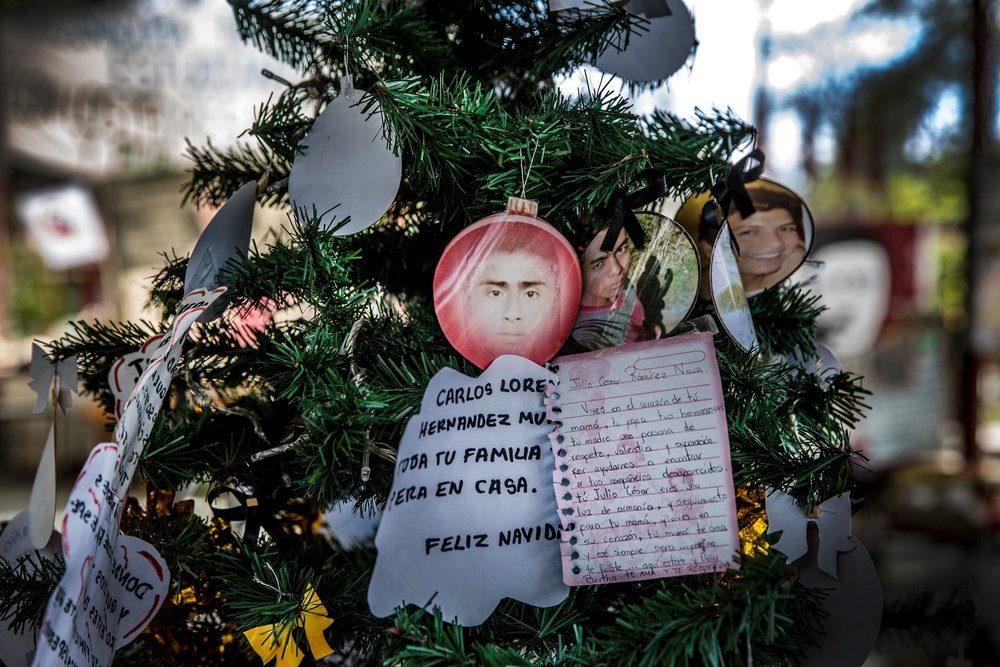 With the possible collusion of corrupt politicians and organised crime in one of the poorest states in the country, the case has shaken Mexican society like few others and has unleashed a wave of international solidarity with the families and the school.

The playing field is deserted, with only a few parents remaining, while the rest are scattered around the country seeking support, making their demands known to the government, refusing to give validity to the Attorney General’s theory that their children are dead, having been handed over by the police to drug traffickers that killed and burned them in a landfill, throwing their ashes into the river.

They demand proof. Otherwise, for them, their children are still alive.

“We don’t eat, we don’t sleep….you eat and you wonder what he is eating, how he is, if he’s ok…it’s been a long time…it’s very painful,” explains Metodia Carrillo, 54, a mother of nine, “nine counting the one I’ve lost, Luis Angel Abarca Carrillo.”

Metodia says that her son didn’t want to be a teacher, but decided to study at the Ayotzinapa college to help the family.

“He always said that the day he left the college, when he started working he would help so we didn’t have to work for them to eat, we’re poor farmers, we don’t have money.” Luis Angel went to Ayotzinapa, one of 16 teacher training colleges in Mexico, because the education is free to train teachers destined for rural areas. 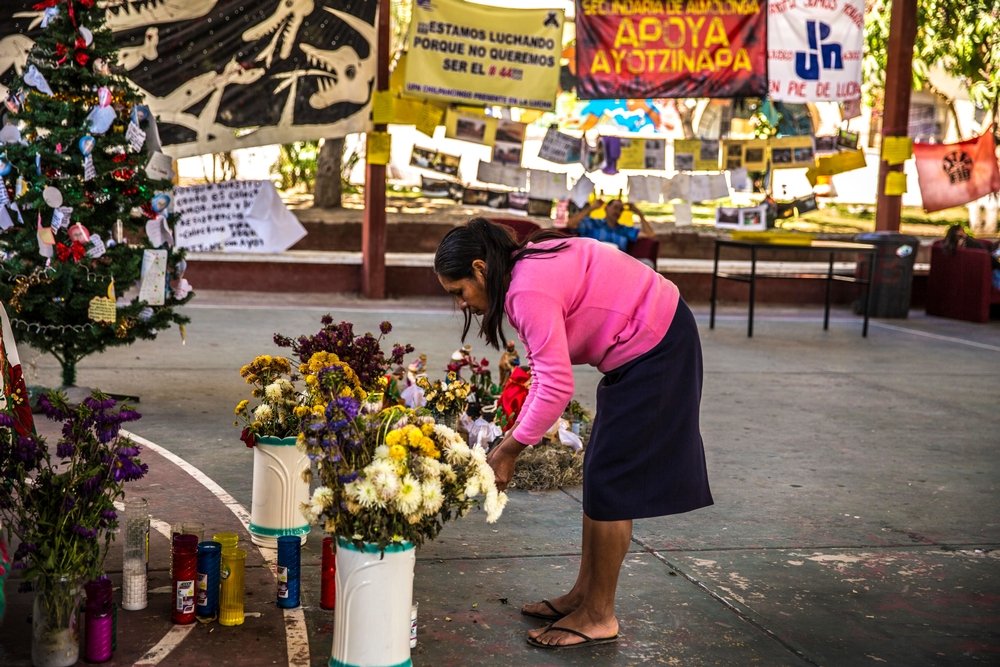 Psychological support on offer from MSF

Metodia is one of the mothers MSF psychologists have supported during these months of waiting, of suspension in time. The project started just a few weeks after the disappearance of the students hit the headlines and when up to 2,000 relatives, friends and students gathered at the college.

"We started the intervention after talking with the parents and decided to distribute mattresses and hygiene kits, because they were sleeping in very poor conditions. We also installed latrines and showers.

Then we started psychosocial support activities, aimed at helping the parents, relatives and classmates to understand that the symptomatic reactions they might have – irritability, insomnia, physical and emotional exhaustion, sleep problems, depression – are normal in an abnormal situation such as the forced disappearance of a family member," says Ivonne Zabala, coordinator of the intervention. 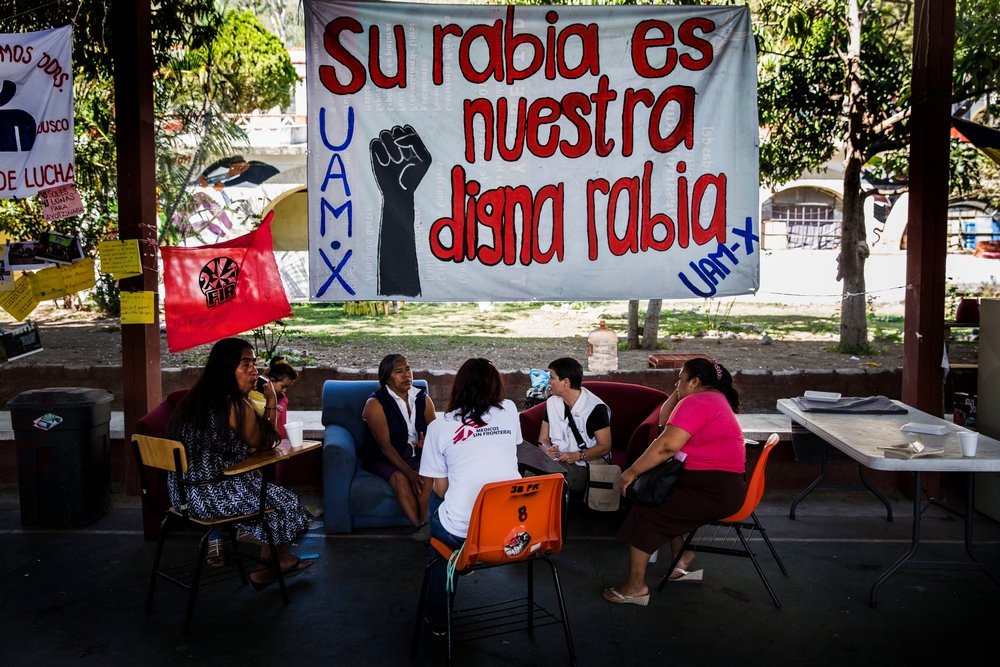 Juan Carlos Tomasi/MSF
MSF has been providing psychosocial support to the parents, families and classmates of the missing

"Dialogue with those affected and the team’s flexibility have been key to designing the intervention strategy of the teams of psychologists.

Early psychosocial support is offered, focused on strengthening resilience and the prevention of severe psychological conditions.

It has therefore prioritised the group’s ability to face the situation more than an individual clinical psychopathology approach at this stage," says Zabala, adding that "our continued presence at the college during these first six months was needed to analyse in detail the process and develop the support."

From April the support will be less continuous, considering the busy schedule of parents in their protest and truth-seeking activities. MSF will remain in contact with the families and visit the school regularly for psychotherapeutic monitoring of specific cases. 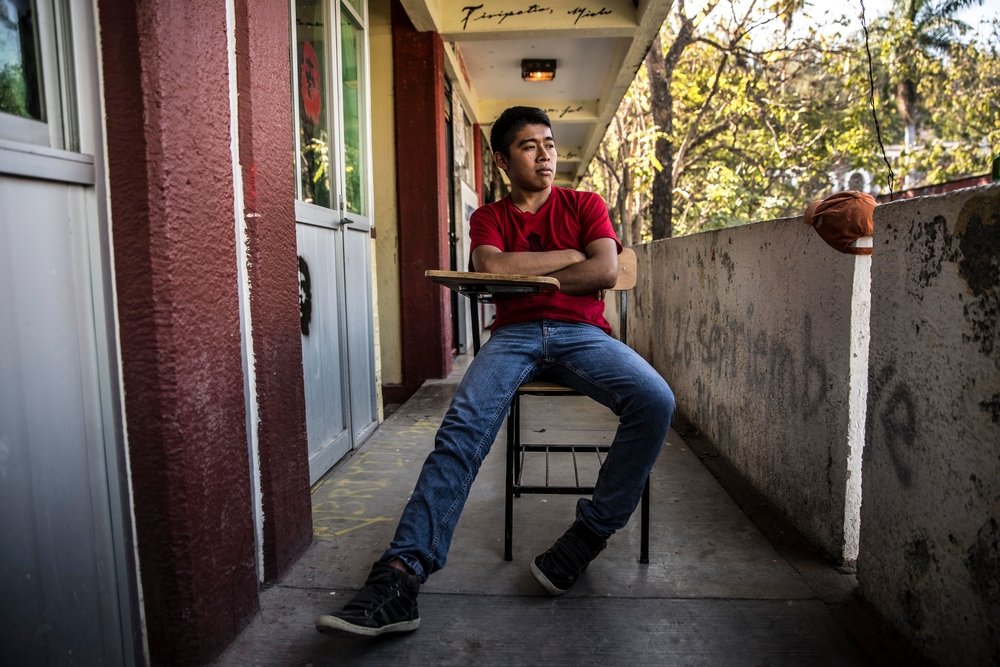 'They took them alive, we want them back alive'

"The parents have been through some very bad times – the time of the disappearance, the uncertainty, the appearance of news in the press that was not to their liking – but the worst moment was when some human remains were found and identified as those of Alexander, one of the 43 students.

That was the worst, because it opened the door to the possibility that the boys might not be alive," says Ivonne.

As on the playing field, time is standing still for the families of the students.

"We’re losing our footing," says Delfina, whose son Adán Abraján De La Cruz, leaves a wife and two children. "We have left everything, left our fields, we only picked pumpkins, but we don’t have the heart for it."

Delfina goes every day to the college with her daughter-in-law and grandson. She can’t stop going.

She doesn’t think that the disappearances can remain unanswered: "There must be an answer, they can’t leave us like this. The government must tell us, they must know, we will defend our children to the end."

She also refuses to consider that her son is not alive. She personifies the slogan that has spread across Mexico and beyond since September: They took them alive, we want them back alive.

"They know where they are, the government knows, and we demand that they give them back to us, it’s been a long time. Why do they want them? What do they want them for? Why don’t they tell us?" 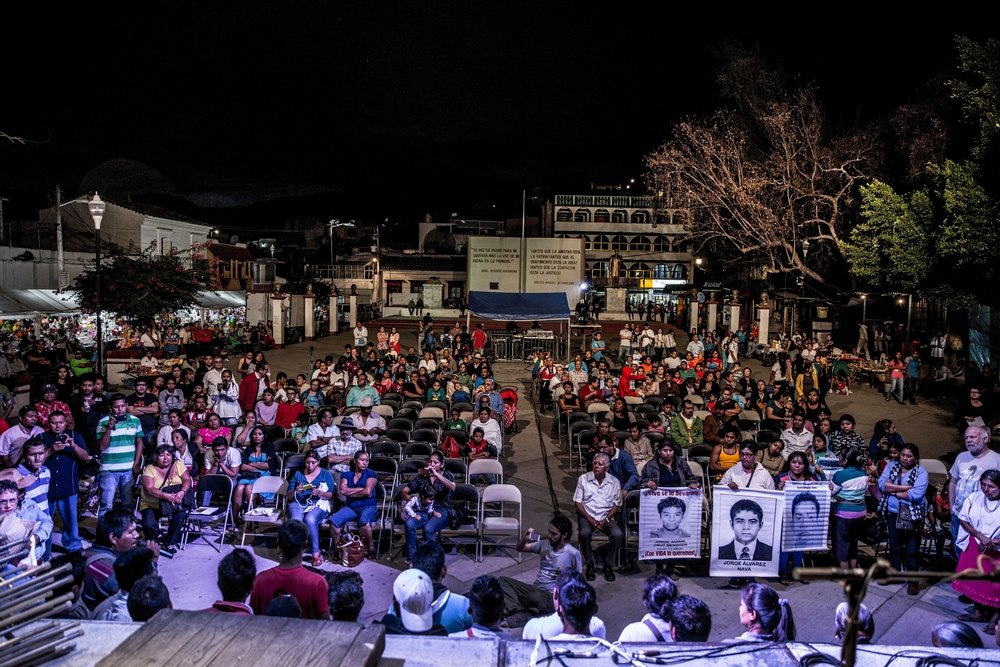 Juan Carlos Tomasi/MSF
Since 26 September, the petitions for an answer to the case of the missing students are renewed at many social events throughout the country. Here, at a concert in Tixtla

Those left behind are refusing to move on

The other students at the college, to whom MSF has also offered its services, have joined the parents’ petitions: "We remain hopeful that our classmates are alive. We’re still here, ready and waiting for them. We aren’t getting used to them not being here. But as each day passes we have to have more strength to continue fighting for them, although we may have to face the worst," said José Angel de la Cruz, 19.

He points out that the students will refuse to return to class, no matter how much the government intends to reopen the college.

José Angel was one of the students who went to Iguala that night to get buses that would take them to the capital to commemorate another slaughter, that of Tlatelolco, in 1968.

A night that ended with three dead, dozens injured and 43 missing. He remembers it with horror and attributes the incident to the state’s desire to close the Rural college "because we won’t shut up, because we are tired of the poverty and marginalisation we come from."

Grieving mothers have not lost hope

Three women sit and talk, with serious faces, about the activities of the week, who has been where in the country, in what committee, to meet who.

Juan Carlos Tomasi/MSF
Natividad, the mother of Emiliano, one of the disappeared, just wants her son back.

Isabel, Natividad and Socorro cling to the idea that maybe their boys are retained, kidnapped to work as slaves for... they do not know, but "they’re alive, they are..." says Natividad touching her stomach as if she can feel it in her gut.

Socorro tells a common story: “The boys are studying here for us, so that when we are old they can look after us. We’re poor farmers, we have no money, we want them to be something."

Isabel attacks the government's version: "They say the detainees have confessed, but they give credibility to the thief. We need results, true and proven." Her son, "the one I lost," Bernardo Flores Alcaraz, is 21 years old.

His credentials were found lying on the ground, covered in blood. "But they said it wasn’t his blood, he isn’t hurt, it was a fellow student’s blood."

Natividad de la Cruz, 52, explains that her son Emiliano, 22, was happy at the college.

"He wants to help the family. We miss him, we cry for him, I don’t know where he is, how he is.... We ask the government to give them back, they’re poor farmers who just want to make a life for themselves, they’re students. It’s the ones that don’t study who are hooligans. They’re just taking care of their life and their work."

Nati, and the other mothers, always speak of their children in the present. Suspended lives. And it has now been six months.