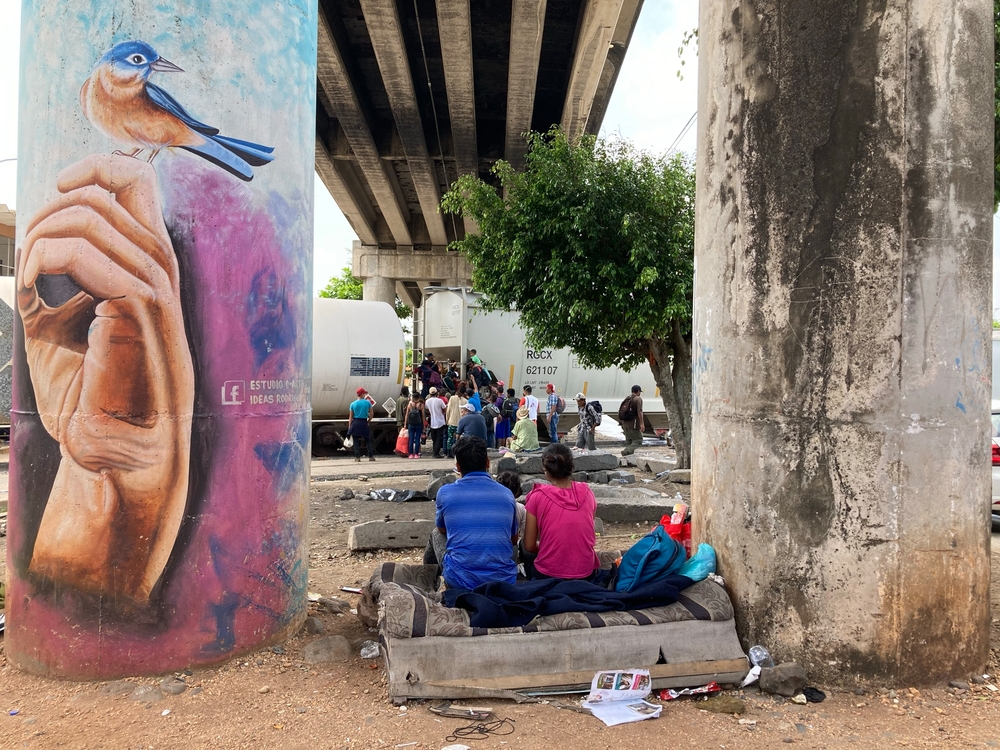 Mexico: Militarisation of borders and mass expulsions increase the danger for asylum seekers and migrants

The commitments announced last week between the United States, Mexico, Honduras and Guatemala to reinforce the militarisation of borders will further criminalise people on the move, says the international medical organisation Médecins Sans Frontières/Doctors Without Borders (MSF), leaving migrants more exposed to organised crime and COVID-19.

MSF has witnessed both repeated raids and arbitrary detentions on the southern border of Mexico and is also seeing asylum seekers forced back to Mexico by the US under the Title 42 order.

This order has been misused to authorize mass expulsions ostensibly for public health reasons related to the COVID-19 pandemic, and effectively blocks the right to seek asylum in the US. 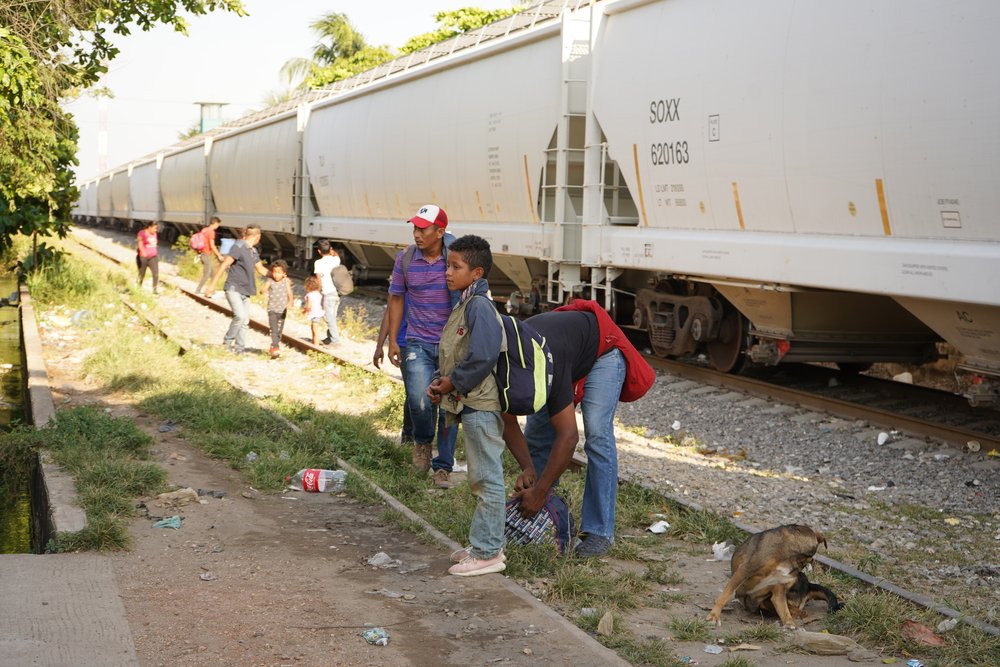 Yesika Ocampo/MSF
In recent months, the number of entire families with children and unaccompanied minors arriving at the southern border of Mexico has increased.

“Once again we are seeing the construction of physical, bureaucratic, and security walls to block asylum and stop the free movement of people fleeing violence in their countries of origin,” said Antonino Caradonna, coordinator of MSF's migration project in the country.

“This is evident both on the northern and southern borders of Mexico. While the United States immediately blocks and expels newcomers en masse, Mexico represses and detains them en masse.”

MSF teams on Mexico’s southern border have repeatedly denounced the mass raids and arbitrary arrests in areas with a high concentration of migrants and asylum seekers, including near the organisation's healthcare posts.

There have been several incidents in Coatzacoalcos, in the southern state of Veracruz, a railway hub that is widely used by people on the move.

“In fact, last week, raids were carried out in Coatzacoalcos on the railway tracks, and around 50 migrants, including families with children, were arbitrarily detained,” said Caradonna.

“They were sleeping near the shelter because they are being denied accommodation, allegedly because of the pandemic.”

Many shelters in Mexico have shut down or reduced capacity due to the pandemic. 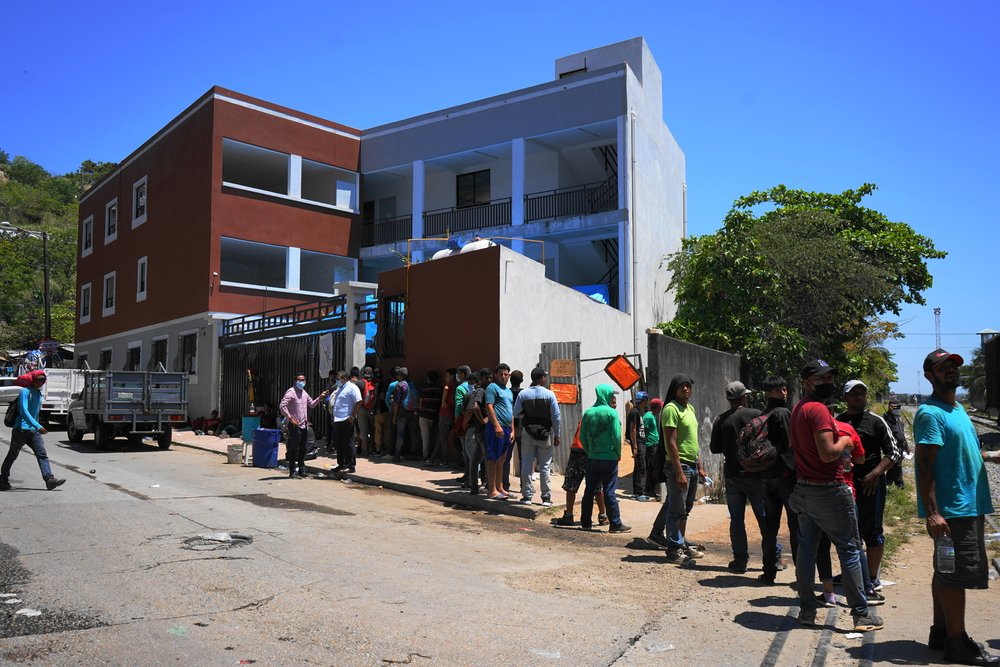 Yesika Ocampo/MSF
Dozens of migrants line up outside the shelter of the Casa del Migrante Diocesis of Coatzacoalcos to receive food. Due to the COVID-19 pandemic, the shelter authorities are not allowing access to migrants.

Police action near shelters or places where migrants receive medical and humanitarian assistance “pushes people in transit to hide more, to opt for more dangerous routes, to be more vulnerable to organised crime and extortion,” said Caradonna.

We have to denounce the extreme lack of protection for these people.

Antonino Caradonna, coordinator of MSF's migration project in the country

"I don't sleep because while my son sleeps, I keep watch"

The testimonies collected by MSF in the area corroborate the increase in raids and arrests on Mexico’s southern border, which put the physical and mental health of asylum seekers and migrants at risk.

“About 400 people came through the mountains, but in the raid they caught about 200. Half were women and the other half were men,” explained Levi, from Honduras. 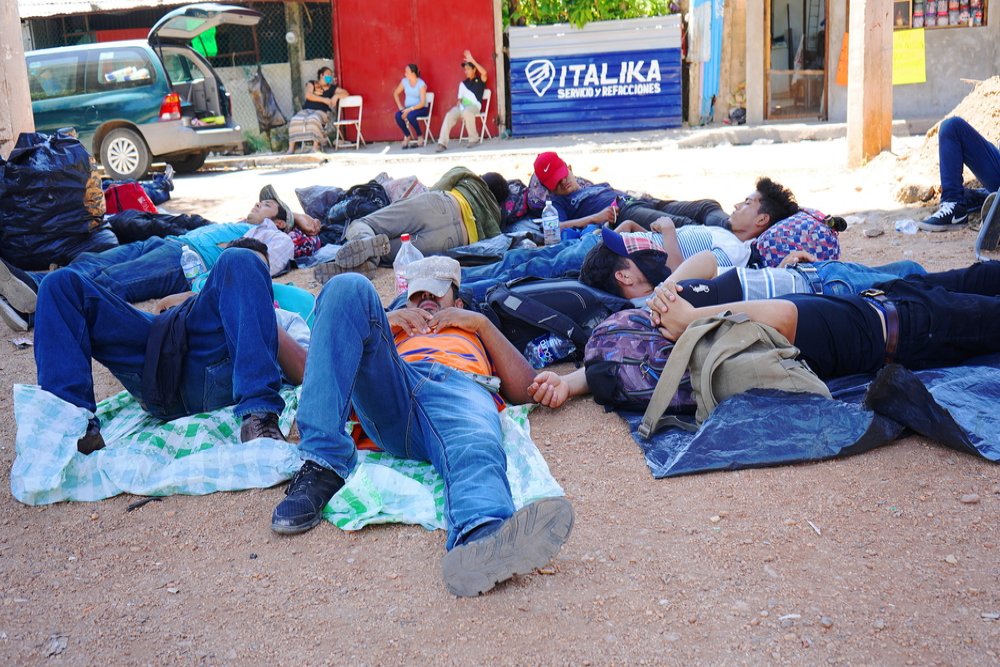 Levi also described the lack of adequate shelter: “We have stayed in the hills and on the roads because we have not found any shelters or houses for migrants.”

“It has been 20 days since I entered Mexico,” said Kimberly, a 29-year-old Honduran woman who is travelling with her 11-year-old son, a brother and his children. 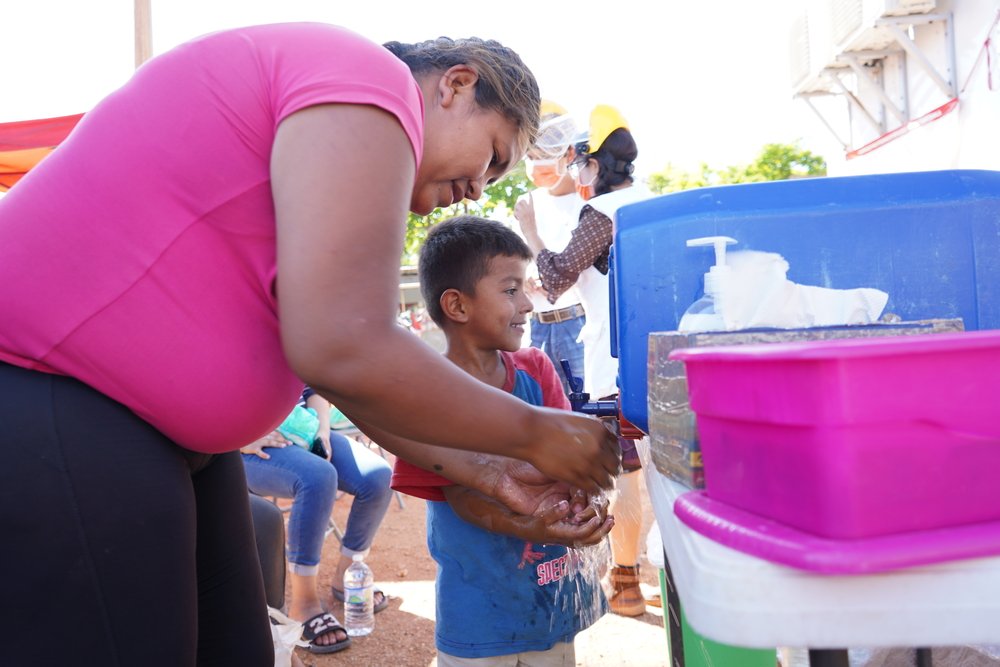 Yesika Ocampo/MSF
In addition to the lack of shelter, food, being able to contact their relatives and areas to wash, bathe, wash their clothes and rest, the closure of shelters leaves migrants more unprotected against COVID.

“We have slept in the fields. We have endured hunger and sleepless nights because we have no money. At the Coatzacoalcos shelter, they told us that it was closed. They gave us food and coffee, but it was no longer possible to sleep inside.”

Kimberly used to work in the fields, but lost everything after the recent hurricanes that hit Honduras.

“I am afraid of staying on the street because anything can happen to us,” she said. 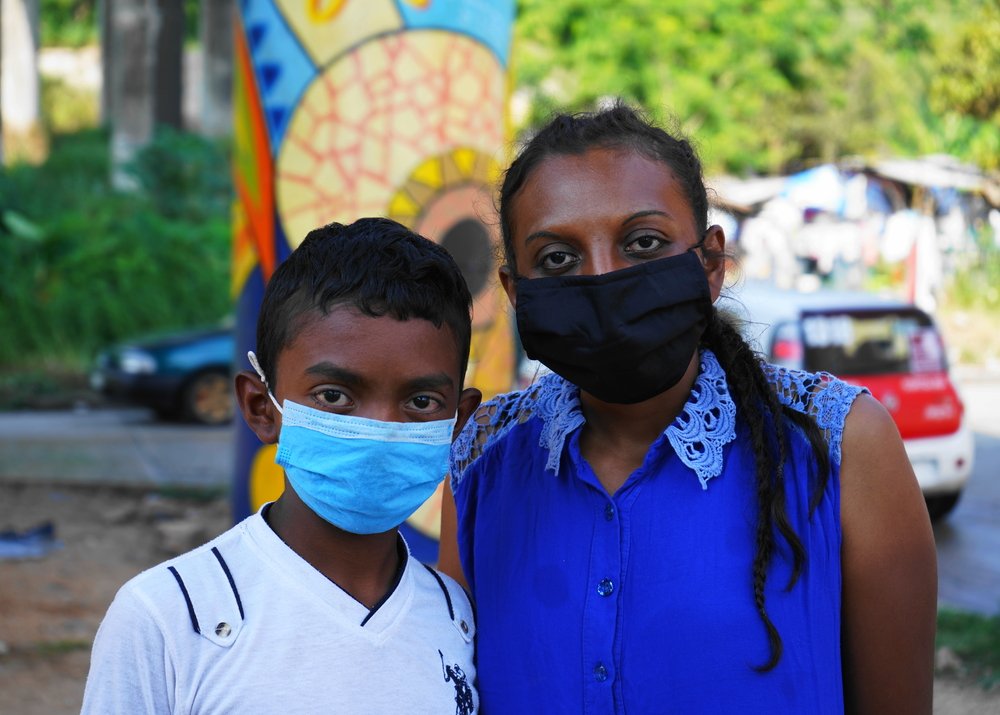 Yesika Ocampo/MSF
Kimberly worked in the fields. He is traveling with his 11-year-old son. She had to leave her other 15- and 8-year-old children in Honduras. She has had to sleep on the street with her son because it is not easy to find shelters.

“I am afraid that my son will be taken from me. I have not been able to sleep. I don't sleep because while my son sleeps, I keep watch.”

Others said they received some help from local residents.

“There are no shelters, only kind people who shelter us, without any problem, in their homes. And you appreciate that because you no longer have to take the risk of sleeping in the hills,” said Roger, a 39-year-old Honduran man.

Along Mexico’s northern border, MSF teams are witnessing the increase in mass expulsions from the US of asylum seekers and migrants under the Title 42 order.

These individuals are returned to Mexico without due process to unfamiliar and often dangerous cities along the northern border. 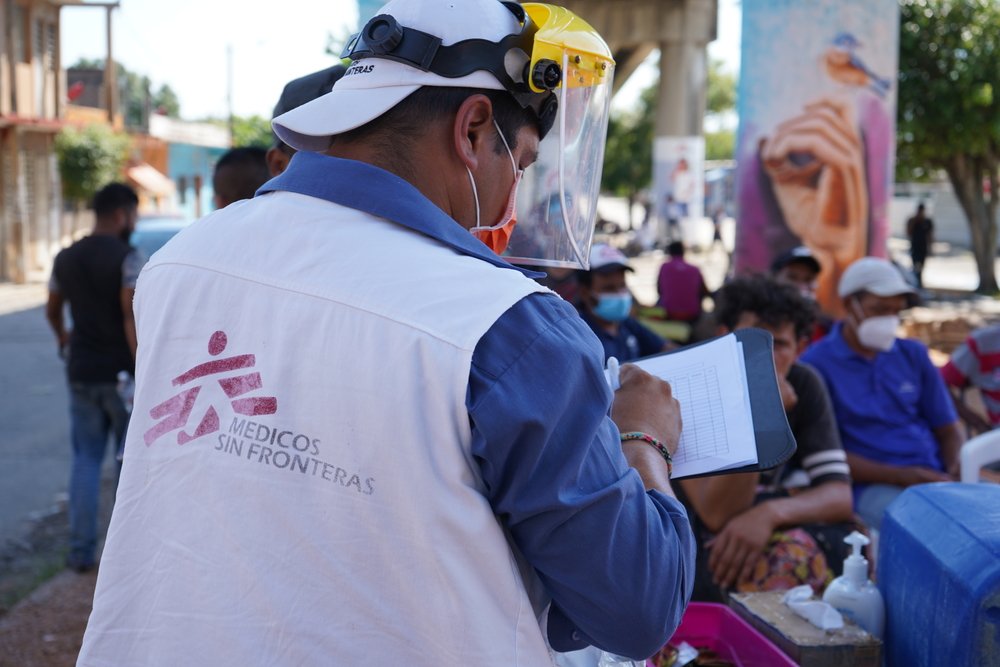 “Our teams give an account of the inhumane treatment migrants receive in detention centres in the US, the impact it has on their health, and the acute stress they carry with them,” said Geaninna Ramos, MSF medical adviser.

“They are being deported to border cities in Mexico, without any information about where they are and what they are going to do next."

"There are many women with children in their arms, who haven't eaten or received dignified treatment while in detention, and without COVID-19 prevention measures in place." 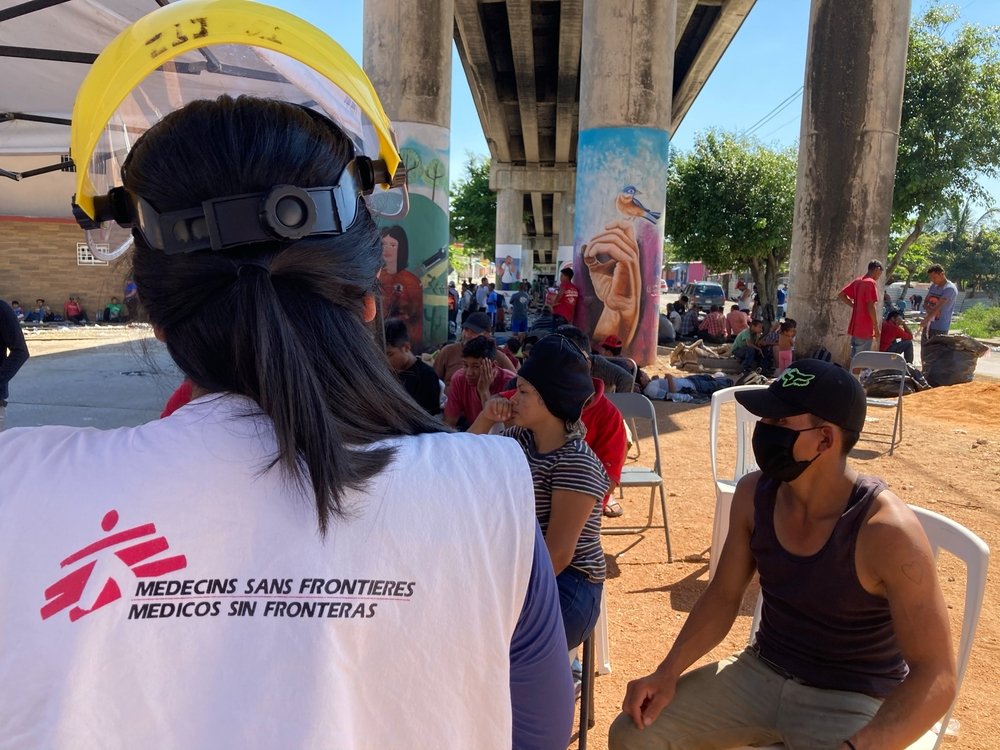 We treated a 4-year-old girl who arrived in Ciudad Juárez dehydrated, because she was not even given water in the [holding] cells in the United States

“I had entered through the Reynosa border crossing, and they sent me back to Nuevo Laredo,” said María, a 33-year-old Guatemalan woman travelling with her 4-year-old daughter.

“I had no way of communicating with anyone.”

She was separated from her husband and son, who are together in a shelter in Monterrey. 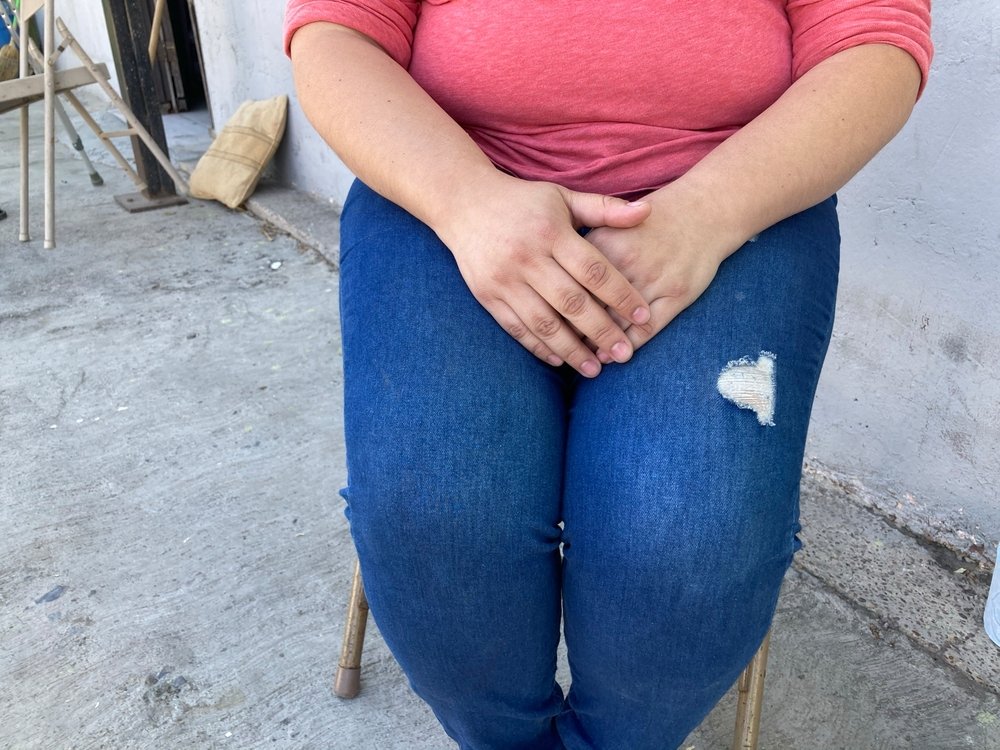 Yesika Ocampo/MSF
Maria, 33, fled with her husband and two children, due to gang threats. They crossed Guatemala and Mexico. When they reached the northern border, in the city of Reynosa, immigration agents detained her husband and their 12-year-old son.

“You ask a question and they yell at you, they push you. To search the minors, they put them all against the bus with their hands up and pushed them."

"I thought about my son. I did not want to think that my son would be beaten, because I saw how they pushed them around to search them."

"They treat us badly. We are fleeing and we have no intention of harming anyone, but I don't think everyone understands that.” 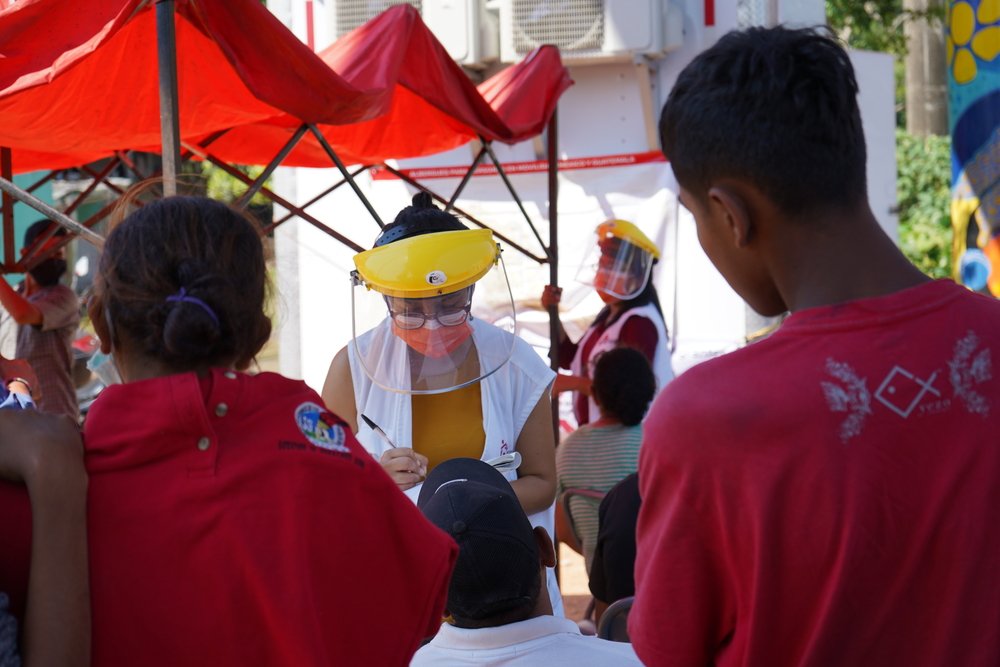 Yesika Ocampo/MSF
The MSF doctor in Coatzacoalcos registers migrants who are going to enter for a medical consultation.

The lack of protection for asylum seekers and migrants, the lack of adequate humanitarian assistance, the lack of inclusion in COVID-19 prevention efforts, the criminalisation of people forced to flee, their vulnerability to criminal gangs that engage in kidnapping, extortion and trafficking—these are not new problems.

“We have seen these harmful migration policies in the past,” said Caradonna. 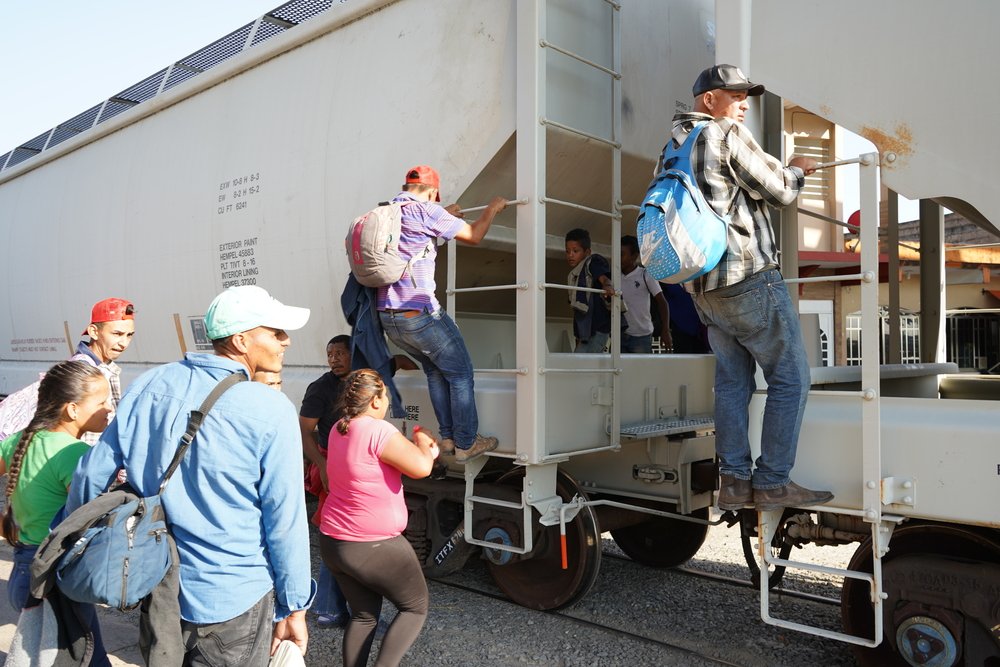 Yesika Ocampo/MSF
Migrants who travel with their children getting on the moving train to reach the northern border of Mexico.

“We know that they do not discourage migrants, but only push them to hide and go down more dangerous roads, where they may be more exposed to organised crime, turn to human traffickers and risk their lives.”

As stated earlier this month by a spokesperson for the US administration, the increased security presence in the region is intended to deter migration: “The objective is to make it more difficult to make the journey, and make crossing the borders more difficult.”

“We have to be clear and look deeply at these policies,” said Caradonna.

Antonino Caradonna, coordinator of MSF's migration project in the country 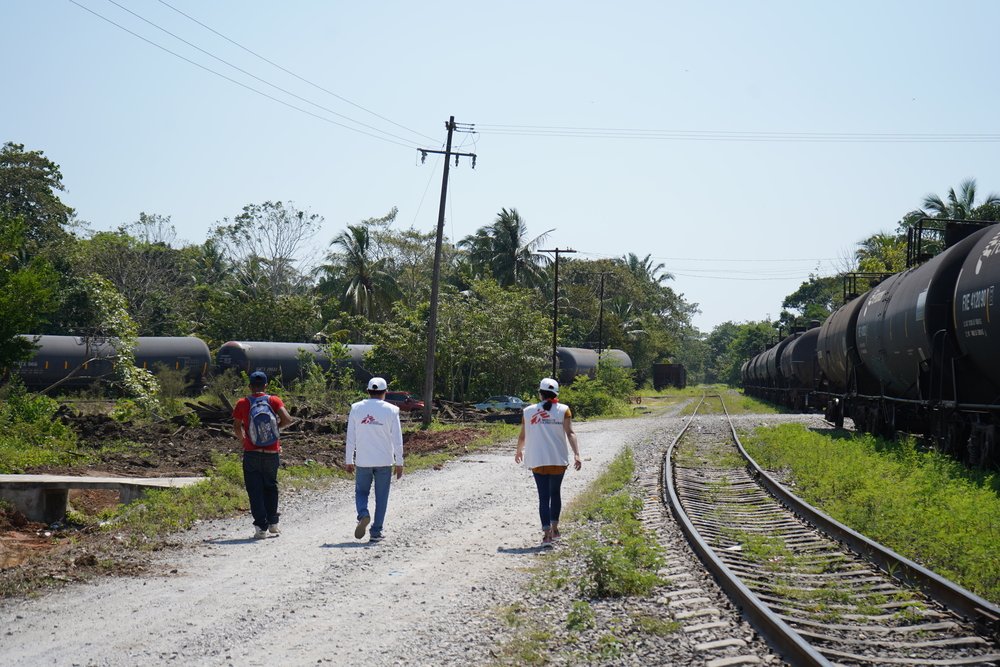 Yesika Ocampo/MSF
MSF staff walk on tracks at the Higueras station looking for migrants who require medical, psychological and social work attention. In that area they are often victims of extortion by the guards and suffer violence at the hands of criminal groups at night.

MSF once again calls on the US, Mexico, and other governments in the region to end these repressive migration policies.

Asylum seekers and migrants must be guaranteed protection and adequate humanitarian assistance in accordance with domestic and international laws and norms.

In the context of the COVID-19 pandemic, efforts must be made to protect migrants from the virus through the provision of sufficient shelters and safe spaces.