Mexico: The torment of forced disappearance takes its toll on mental health

In recent years, Mexico has been among the countries with the most forced disappearances. Currently, there are more than 37,000 registered cases of forced disappearances in Mexico. Juan Carlos Arteaga, mental health activity manager for Mexico and Honduras, and Nora Valdivia, clinical psychologist for Médecins Sans Frontières (MSF) in Reynosa, in northern Mexico, describe the impact of this torment on people’s mental health as an open wound which needs to be closed in order to be able to heal completely.

Gladys* walked slowly, talked quietly, and seemed sick. Her face looked tired, sad, discouraged. There were days when she expressed hope of finding her grandchildren, and other days she plunged into deep despair over the disappearance of them, and of her son and daughter-in-law. Ever since that moment, five years ago when she learned they had disappeared, she stopped sleeping and eating. The search without any answers had exhausted her so much that she felt very weak.

This mother and grandmother is one of the many patients, mostly women, that MSF treats on an ongoing basis in our project in Reynosa, Tamaulipas, one of the states in northern Mexico. The project promotes a model of comprehensive care – medical, psychological and social – aimed at survivors of violence and sexual violence in an area with one of the largest numbers of forced disappearances.

“The number of people who go missing is high because of the context of violence that exists in the border area due to clashes between cartels and their confrontations with the military”, says Juan Carlos Arteaga, mental health activity manager for MSF in Mexico and Honduras.

"When violence in the area got worse, we identified a need to intervene, and at the end of 2016, we opened a project with a specific focus on mental health. MSF focused on mental health because the type of violence with which people were confronted with every day left a lot of psychological scars”, says Arteaga. 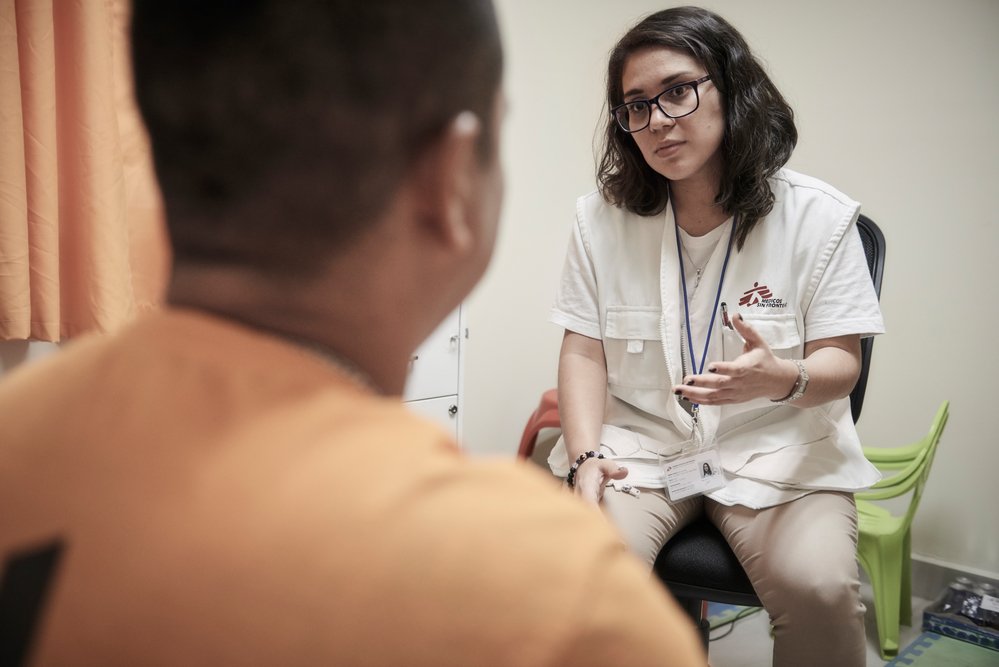 Christina Simons/MSF
“These are people who have an urgent need to speak to someone to help express their pain”, Nora Valdivia, a clinical psychologist with MSF.

“Our psychological teams in Reynosa regularly identify patients like Gladys, who have suffered the disappearance of a family member”, says Nora Valdivia, a clinical psychologist with MSF. “These are people who have an urgent need to speak to someone to help express their pain.”

Often these patients will reach a point where they feel that the torment is too much because of unfinished grief and they need to talk. At the same time, they’re afraid to talk about what is happening to them because they fear that if they do talk, other relatives will disappear or there will be retaliation against them. One of the main challenges MSF faces then is to find and reach these people that need help.

“If the topic of forced disappearance had a health focus, many more cases of the mental health anguish people suffer would be made visible”, says Nora, who recalls that when Gladys arrived at her first consultation, she suffered from chronic depression. “After so many years, she was resigned to not finding her son and daughter-in-law, but not her grandchildren because they were little, and she had the illusion of finding them.”

Nora and Gladys began a process of arduous therapy. “At the beginning it was complicated. She had many emotions, a lot of pain and she cried a lot”, says Nora. “But as we worked together each session, she learned to manage her thoughts, regained her focus on herself, the will to live, as well as her physical health. She became less exhausted and could finally sleep.”

According to Valdivia, the lack of sleep is one of the symptoms patients have, along with a lack of appetite, and feelings of discouragement and deep sadness. “It's like a buried pain”, Valdivia says. “A daily torture because people don’t know what happened to their loved one, they don’t know if they’re still alive, or in what circumstances they are. These are questions and thoughts that come to them constantly.”

“These are people who have an urgent need to speak to someone to help express their pain.”

“With the disappearance of their relatives, it seems as if they too had disappeared. As if their life had extinguished”, says Valdivia. Patients start to recover from the first therapy session, by improving their sleep and appetite. Anxiety decreases, along with the other symptoms and patients’ quality of life improves.

“Although therapy sessions do reduce the symptoms, we handle patients as if they had a long-standing chronic illness”, says Arteaga. “When they’re not certain about the fate of their loved ones, patients cannot have a complete recovery. The disappearance is like torture. It is something that will be continuously with them until it’s resolved, one way or another. For closure, they need to find what happened to their relative, whether they’re dead or alive.”

It is difficult to be clear to explain and to talk about the phenomenon of disappearance in Mexico because there are few records. The context of violence in Reynosa inhibits the people left behind, making their access to mental health limited, especially when mental health continues to be stigmatised. “There is a lack of education in the country about what psychology really does, about the importance of dealing with emotional situations that wear us down”, says Valdivia.

MSF manages a project in the city of Reynosa, Tamaulipas, whose objective is to offer medical, psychological and social care, totally confidential and free of charge, in different parts of the city.

read more about how we provide mental health support >