Almost a month on from the fires that destroyed Moria camp, thousands of people are still living in an overcrowded and miserable new camp on Lesbos and many more continue to be trapped in other hotspots on the Greek islands.

MSF teams in Lesbos continue to treat patients in our clinic outside the destroyed Moria camp by shuttling patients back and forth from the new camp. Our medical teams are focussing on mental health, chronic paediatric cases as well as sexual and reproductive health activities, while our Mytilene mental health clinic remains functional treating victims of violence with severe mental health problems.

People are forced to sleep on dust and rocks

People who live inside the new camp have told MSF that some families are forced to share tents with other families, without privacy, while single men are squashed inside big rub hall tents all together on double bunk beds in big numbers.

Our patients have also reported that there are no showers in the new camp and they have to go to the sea to wash themselves. Some tents still have no flooring and people are forced to sleep on the ground on dust and rocks, while there are only 345 toilets available. 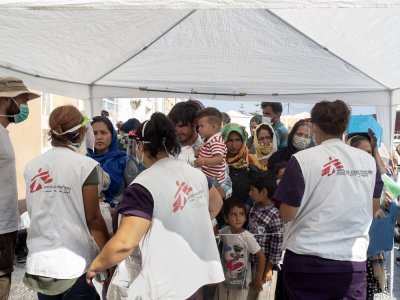 MSF has been alerting European states to conditions in the camp for years and  just the week before these fires, had been pushing the Greek health and migration authorities to implement an adequate COVID-19 response plan for Moria. However, the Greek authorities failed to put such a response in place.

The EU and other EU member states have not stepped up to their responsibility to resolve this situation either, even after the Moria disaster.

On the nearby island of Samos, 4,500 people including more than 1,000 children, are forced to live in filthy and overcrowded conditions in the Vathy camp. There are hundreds of vulnerable people, and others who, due to their medical conditions, are at high-risk to COVID-19.

MSF has adapted activities to respond to the needs

Shortly after the fire, RTÉ Morning Ireland spoke with our colleague Faris Al-Jawad, who gave an account of how those affected were coping, and of the medical and humanitarian needs of the population, which remain significant.

MSF has adapted activities to respond to the enormous needs and created a new clinic in a warehouse close to where people were sleeping, and continues to advocate for the safe relocation of those affected.

MSF doctor Claire Dunne, has been working intermittently with refugees on Lesbos since May 2019 and has remained on the island throughout the COVID-19 pandemic. In  an interview with Ray D’Arcy on RTÉ Radio One, Claire gave a first-hand account of her experience working in Moria, and the immensely difficult situation facing refugees on Lesbos in the aftermath of the fire.

In the aftermath of the disaster, Ireland’s Minister for Justice has confirmed that Ireland has committed to the relocation of an additional fifty women, men and children from Greece to Ireland. MSF continues to advocate for the evacuation of those affected by the Moria fires from Lesbos, and for an end to the EU’s cruel migration policies of containment and deterrence.

One month on from the fires, we are asking our supporters in Ireland to add their voices to a petition signed by 160,000 people and 450 humanitarian and civil organisations across Europe so far, calling for:

1) The immediate evacuation of the Greek islands to safe accommodation.

2) No more containment policies on the Greek islands.

3) No more policies focused on deterrence and returns instead of humane reception and protection.