In a ward at MSF’s post-operative care facility in Mosul, Ahed is sleeping deeply. The young girl just underwent her 27th surgery in less than two years. Her aunt, Rana, puts her hand on Ahed’s head and whispers, “I just hope her wounds will heal, so she’s not constantly reminded of what happened to her family.”

On 19th June 2017, the battle for Mosul entered its fiercest phase, as the Iraqi army tried to retake the last quarters of the Old City from the Islamic State group. Rana explains, “Ahed’s family were living in the area. They tried to flee, but the Islamic State fighters brought them back and put explosives around their house before climbing on their roof to use it as a strategic position. Soon after, two airstrikes hit the neighbourhood. Seventy families died within a few minutes. Ahed, two of her sisters and a neighbour were the only survivors.” She survived, but her body was riddled with shrapnel. Twenty-two months later, she still hasn’t fully recovered.

Ahed is one of many children to be treated at the Médecins Sans Frontières/Doctors Without Borders (MSF) hospital in East Mosul in the last year. In April 2018, MSF opened a comprehensive post-operative care facility there, to treat patients with traumatic injuries. A year later, 321 people, including 52 children, have passed through the hospital, some staying for weeks or even months of treatment. “Many war-wounded patients need follow-up care,” explains Itta Helland-Hansen, MSF’s field coordinator at the hospital. “In Mosul, the military offensive took a staggering toll on the local health system. So we are here to make sure that people can get healthcare and receive treatment in such challenging environment.” 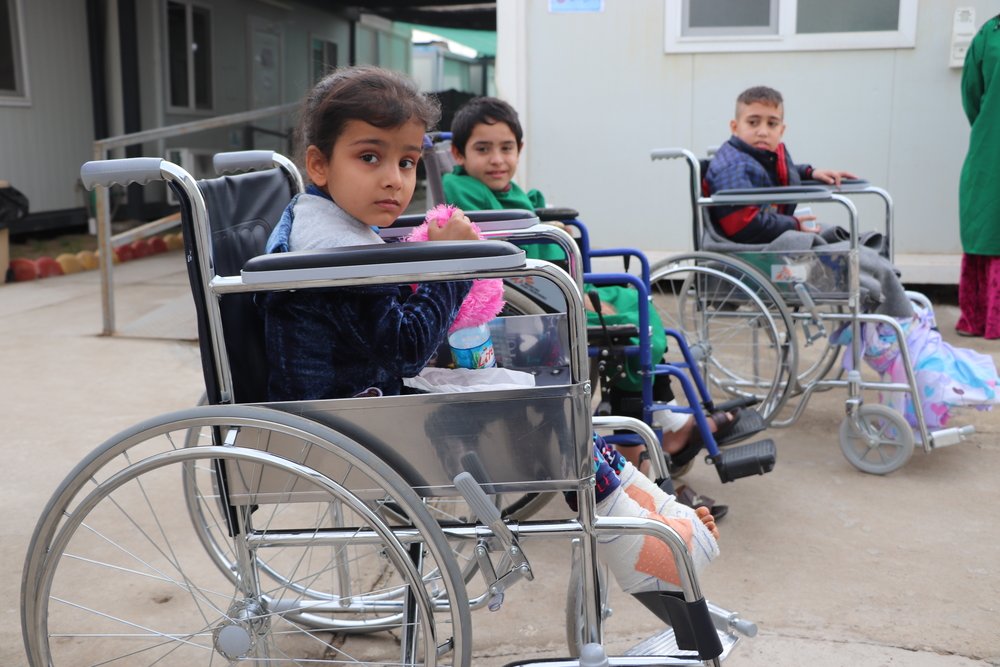 Elisa Fourt/MSF
Saif and Ahed are nine years old and Salim is eleven years old. The three of them are being treated at MSF’s post-operative care facility, in East Mosul.

Weeks or months of recovery for some patients

A few beds away from Ahed, a teenage boy called Ali is lying on his bed wide awake. Metal scaffolding surrounds Ali’s leg, but he doesn’t seem bothered by it. The 14-year-old is furiously playing on his phone. Without taking his eyes away from the screen, he explains the purpose of the video game to the doctors that stop by his bed for their daily medical round. In the game, Ali is parachuted onto an island and has to scavenge for weapons and equipment to kill others, while avoiding getting killed. “Back at home, my older brothers were playing it, but my mom did not allow me to. She kept saying that it was too violent and I was too young, that I was still going to school. But here, she’s a bit more flexible; she knows I easily get bored.” Ali has been at the facility for the past two weeks after he fell off his bike and severely injured his leg. Not all the patients here are war-wounded, MSF also treats people injured in everyday accidents. 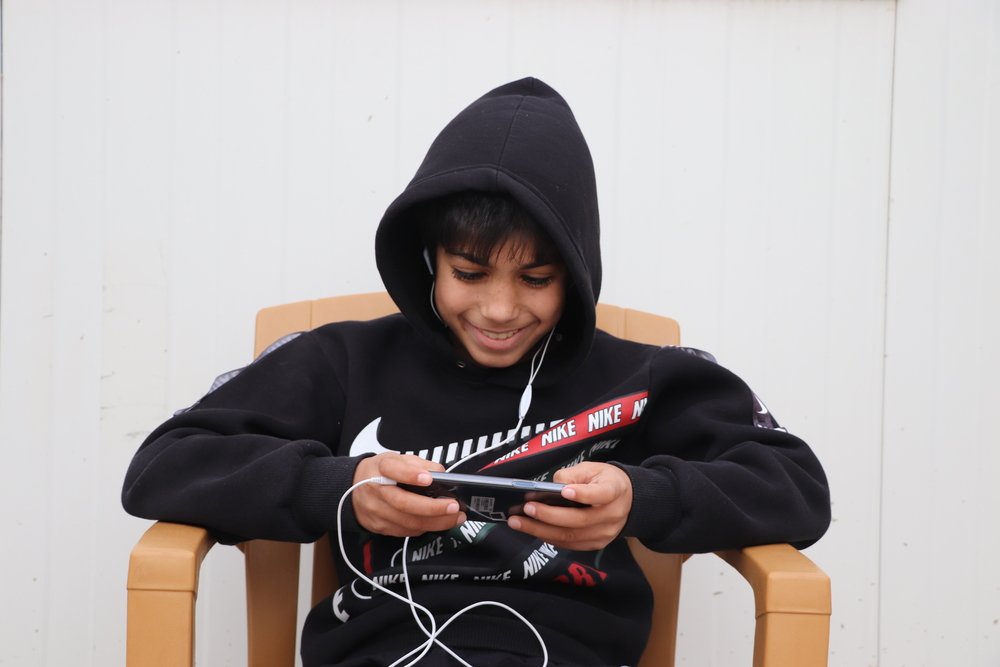 Elisa Fourt/MSF
Ali, 14, fell of his bike on his way to a football game and severely injured his leg.

Ali knows that he’ll have to go through a few more weeks of physiotherapy before getting back on his feet, but the doctors are very positive about his recovery. For others, the road to walking again will take more time. 12-year-old Abdallah sits outside the ward. He has just finished his rehabilitation session and tries not to show how exhausted he is from the exercise. He only has one leg and cannot be fitted with a prosthetic yet. In summer 2018, Abdallah was injured in an explosion that he thinks was a landmine. His brother was with him and died instantly from the blast. “The doctors tried to save my leg, but they couldn’t. I stayed at the hospital for a month after my injury, and then went home. Without my leg and without him.” Since then, Abdallah has passed through various hospitals to get his wounds checked. Almost a year later, he still hasn’t fully recovered. When he was admitted to MSF’s post-operative care facility a few weeks ago, doctors found out that Abdallah had antibiotic resistance. “That’s why everything is taking so long to get better,” he sighs. 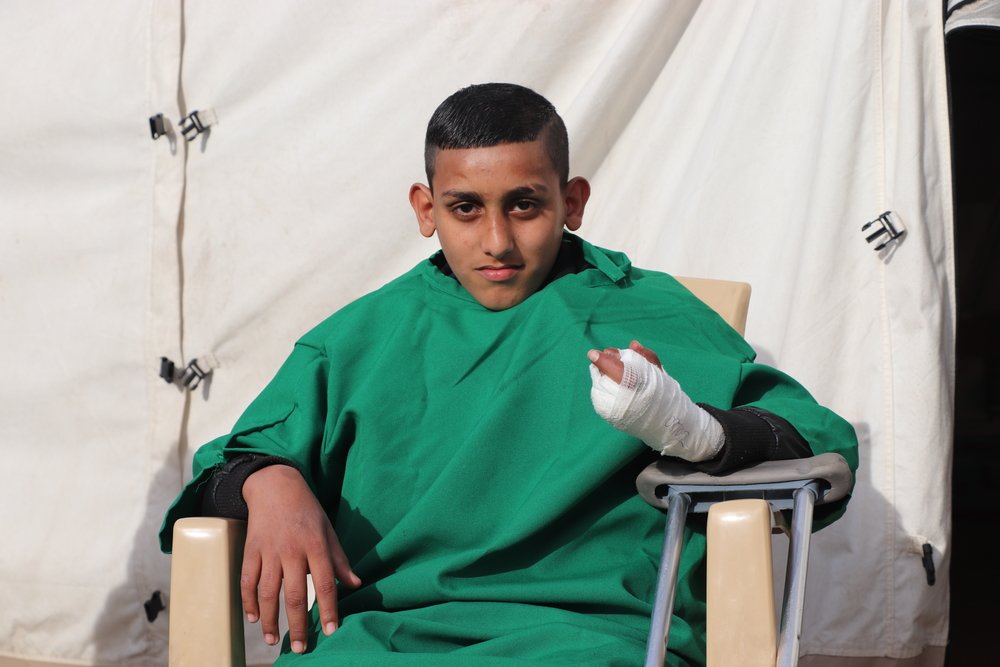 Elisa Fourt/MSF
Abdallah, 12, was injured by an explosive weapon in Mosul in the summer of 2018.

The invisible burden beyond the injuries

Abdallah is not the only patient in this situation. More than a third of the patients at MSF’s post-operative care facility show some form of antibiotic resistance.* This means they don’t respond normally to some of the antibiotics given to them, which considerably complicates their recovery. Abdallah’s ‘neighbour’ at the hospital is Salim, a boy of about the same age. He also shows antibiotic resistance and has to stay in an isolation room to avoid the spread of antibiotic resistant infections. In December 2018, Salim was run over by a van on his way to school. “I was immediately taken to the nearest hospital. At first, the doctors told my dad and I that I would probably lose my legs. I was so scared. But then, another doctor came and said he would do all he could to save them. I was operated on four times. And then another eight times since I arrived here at the MSF hospital back in January.” Since then, Salim has spent most of his time in his room, reading his school books and playing dominos with the facility’s psychologist. “I also made friends with some of the boys here, but we cannot spend a lot of time together or get too close to each other because most of us have bacteria and have to wear this green gown for protection.”

Salim’s friend Saif is one of the facility’s youngest patients. He has been here for a month. His family were displaced by the recent conflict and live in a camp not far from Mosul. “Life in the camp was not easy, but I was still happy because I got to go to school. One day, another boy at school threw a big rock at me and it broke my leg,” he explains. Saif went from one hospital to the next, before ending up at MSF’s facility in East Mosul. There, MSF teams found out he also had antibiotic resistance. “The doctors tell me it is taking longer [to recover] because I have bacteria in my body and these bacteria make it harder for my leg to become normal again. And these bacteria can hurt other people too, so the doctors put me in this isolation room.” MSF’s mental health and health promotion teams visit Saif and other patients suffering from antibiotic resistance each day to help them cope with the conditions of their treatment. 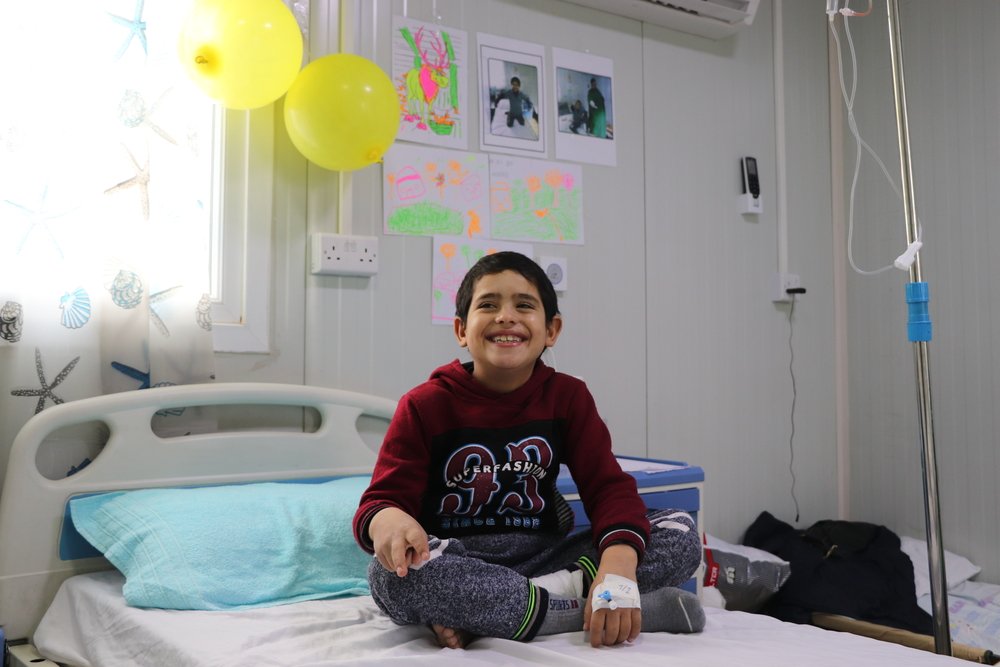 Elisa Fourt/MSF
Saif, 9, injured his leg at school. He is being treated at MSF’s post-operative care facility, in East Mosul.

A year after it opened, the MSF facility in East Mosul has proven critical in these patients’ recovery processes. As Itta Helland-Hansen explains, “Many of them went from hospital to hospital for treatment before getting here, but they would simply not recover, either because post-op care was not available where they were or because no-one noticed that they had developed some sort of antibiotic resistance. In many instances, it was a bit of both… To this day, we are one of the only facilities in Iraq to be able to identify and properly treat these patients. This explains, in itself, the reason of our presence. The battle for Mosul might have ended almost two years ago, but the needs remain. It is important for us to be there and for these people not to be forgotten.”

MSF has been providing lifesaving services for people caught up in the violence in and around Mosul since late 2016. Throughout 2017 and 2018, MSF ran a number of trauma stabilisation posts in East and West Mosul, and ran a range of services, including emergency and intensive care, surgery and maternal healthcare in four hospitals and mental health services in three primary healthcare centres. In April 2018, MSF opened a comprehensive post-operative care facility in East Mosul.