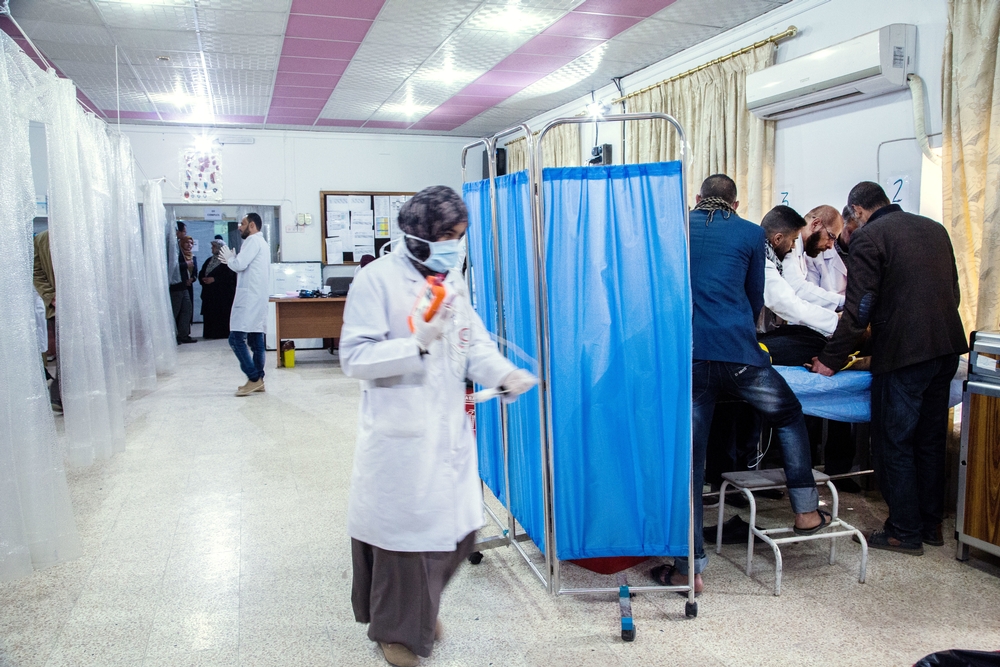 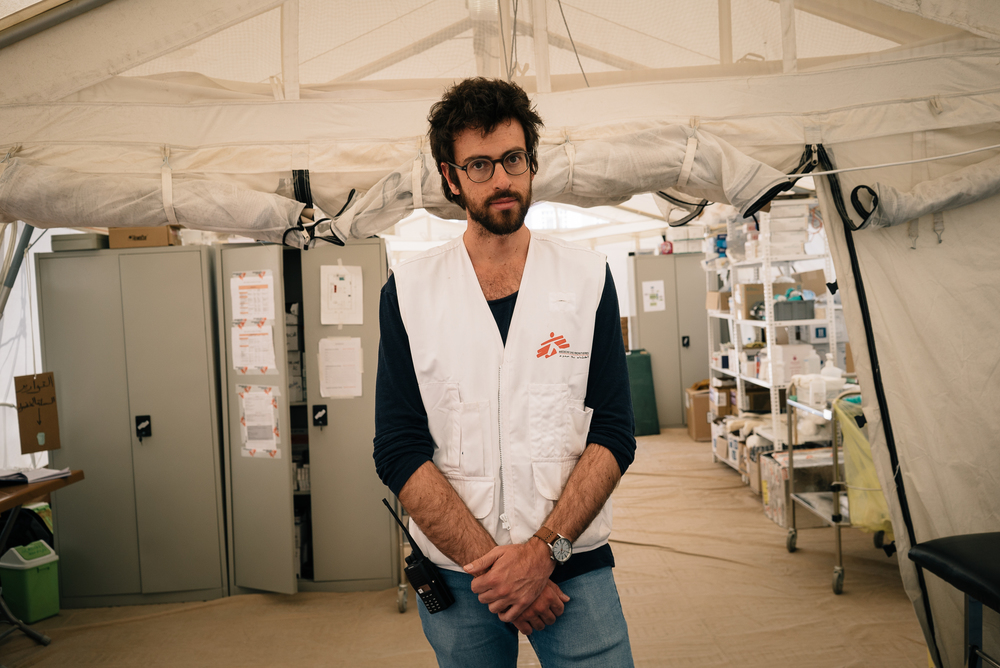 Mosul: "The patients we receive are the 'lucky ones'"

Jonathan Whittall has been working in Médecins Sans Frontières (MSF)’s newly opened field trauma hospital in a village south of Mosul, Iraq. He describes the 24-hour emergency trauma care provided by his team of dedicated Iraqi and international staff.

There is nothing average about a day in this hospital.

Every day we see the worst of the worst injuries inflicted by this war.

There is a near constant flow of patients and every single one comes with horrific stories...

An entire family has been killed, with only one survivor. A father and his son were trapped under the rubble of their house for days after an air strike and have only now reached us for help.

A little boy has arrived with a gunshot wound to the head. Another boy’s father tells us his son has been shot by a sniper and been treated at home for days before reaching our hospital paralysed.

A baby arrives with a bullet wound. One man is dead on arrival from injuries sustained while protecting his child from nearby blasts.

For each one of these cases there are hundreds of others just as horrific.

We are treating the most severe cases.

We are set up to deal with what we call 'red cases'. These are the cases that often need immediate lifesaving or damage control surgery in order to survive.

Our two operating theatres are almost always busy operating on these cases. We then refer the patients to other hospitals as quickly as we can in order to always be ready to receive other 'red cases' or mass casualties. 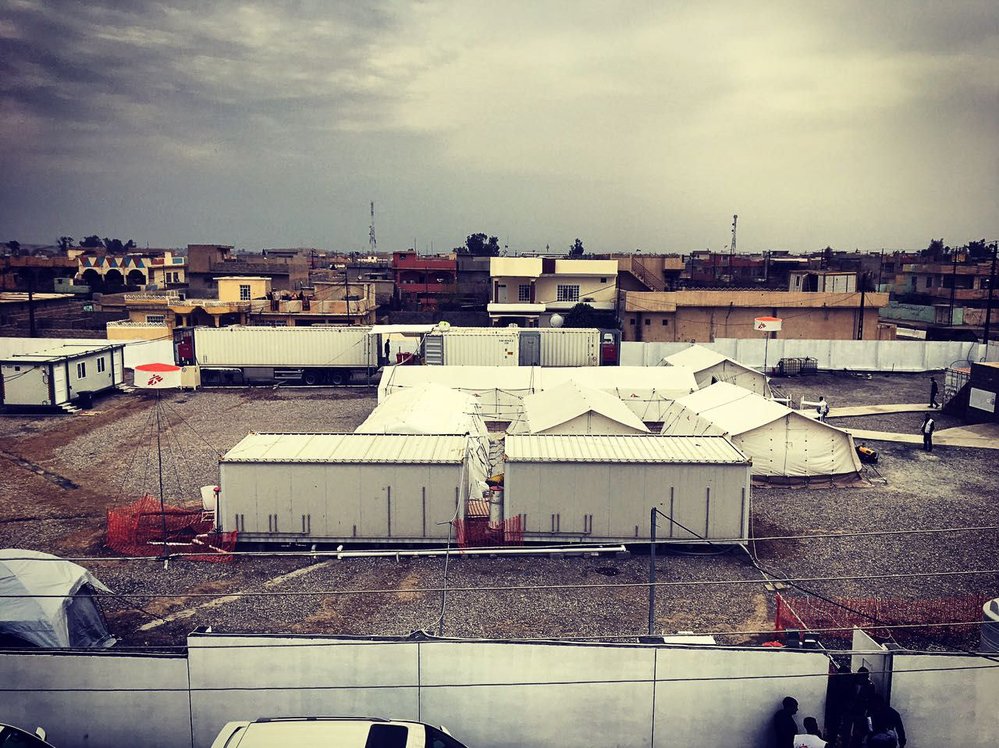 MSF teams in and around Mosul (northern Iraq) have received more than 2,000 patients in need of urgent or lifesaving care in the last two months, the vast majority of whom needed treatment for conflict-related trauma.

In the trauma hospital south of Mosul that I am working in, we have received about 1,296 of those patients.

"Everyone is at risk"

We are seeing every kind of war injury you can imagine - multiple gunshot wounds, blast injuries, severe burns.

We are trying our best to deal with the medical effects of a high intensity urban war unleashed on a trapped population.

Everyone is at risk.

"[Our patients] often arrive barefoot and covered in mud after having walked in the rain, across front lines in darkness, with literally nothing but the clothes on their back."
Johnathan whittal

Beyond the extent of their injuries, the state in which our patients arrive is also extremely disconcerting; many have been living under siege and trapped for months. Many have not eaten in days and are afraid and bewildered.

They often arrive barefoot and covered in mud after having walked in the rain, across front lines in darkness, with literally nothing but the clothes on their back.

Our doctors and surgeons also treat injuries caused by the remnants of war.

Just a few months ago the town where we are based was on the frontline but today it is a reception point for the tens of thousands of families fleeing western Mosul.

One evening we received several wounded patients after a mine was detonated close to the camp where the internally displaced people from Mosul are staying and one morning this week we received a four year old child from the town that was dead on arrival after playing with an unexploded ordnance that detonated in his hands.

The deadly journey to our hospital

The ones we receive have often been stabilised at medical posts closer to the front line.

We receive the 'lucky' ones.

From what I have seen in the hospital, it seems to me that most of the patients we receive are wounded in the middle of clashes when the frontline moves through their neighbourhoods.

Many are injured while trying to escape. We have seen patients with suspected sniper wounds to the back of the head, we have also seen patients that have been injured in air strikes. 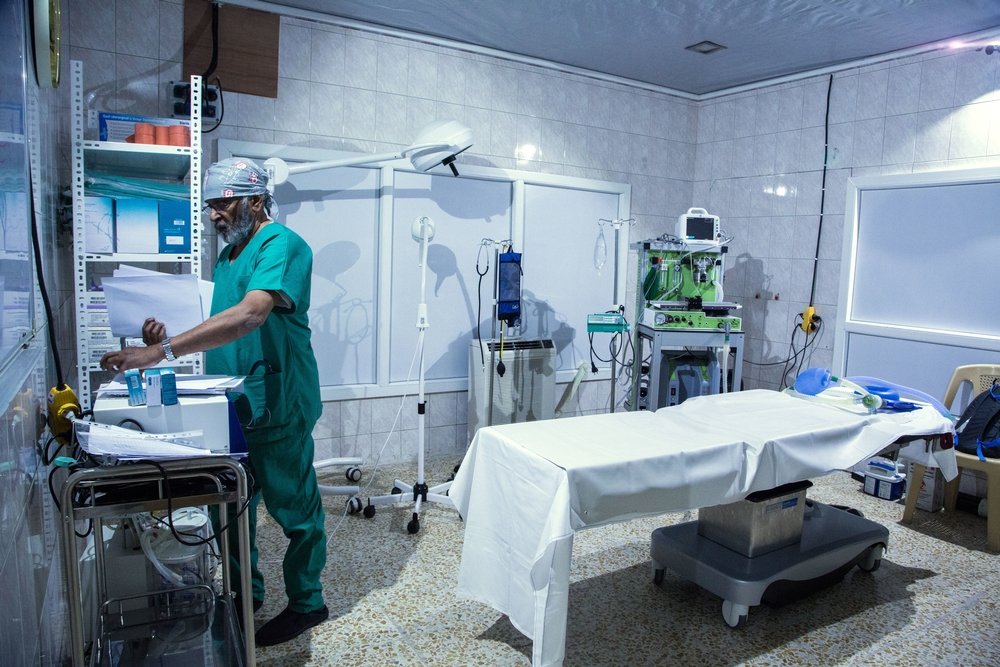 Louise Annaud/MSF
The operating room inside one of our other field hospitals outside of Mosul.
For patients who are injured by air strikes that happen deeper into areas controlled by IS, it seems that it can take a number of days before they are able to reach medical care in the south of Mosul.

From what we understand, it is only when the frontline moves over their neighbourhood that they have a chance to reach medical assistance.

We are extremely worried about reports that huge numbers of people trapped and wounded inside west Mosul and unable to reach medical assistance on the outside.

Over the past few days the hospital has been the calmest since we started.

But we don’t think this is because the violence in west Mosul has stopped - it is a sinister calm; air strikes are continuing but patients are not reaching us.

"We are all extremely proud of the work being done here"

The team working in this hospital come from many different parts of Iraq and from across the globe.

We have medical staff from Mosul who can no longer work in their hospitals, international team members that have worked in multiple wars with decades of experience in trauma surgery, and a non-medical team of guards, translators and logisticians that keep the hospital running.

For the members of the team who are from Mosul, it is especially difficult to see the level of destruction and suffering of fellow community members. 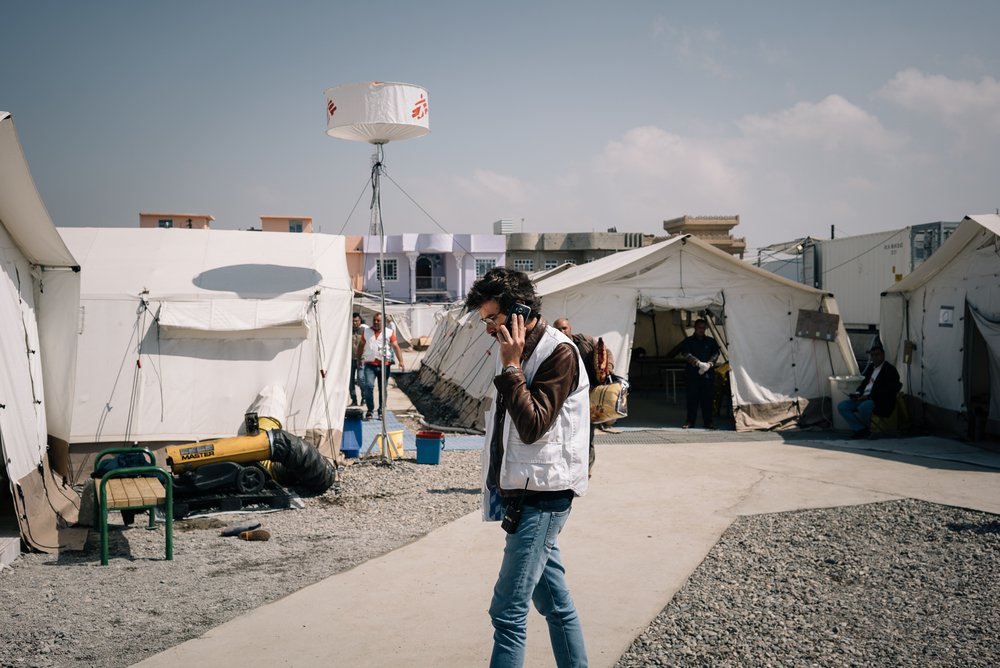 Alice Martins
Jonathan Whittall talks on the phone at the MSF Field Trauma Clinic, South of Mosul in Iraq.
Other members of the team who are from the town in which we are based are picking up the pieces of their lives after fighting moved through this town only a few months ago.

Our hospital is surrounded by destroyed homes. Everyone has lost someone in this war.

However, the hospital has one of the best team dynamics I have ever experienced.

Everyone works around the clock and is always on call, ready to adapt and to find solutions so that we can continue to save lives.

We are all extremely proud of the work that is being done here.