Mozambique: Five things you need to know about the conflict in Cabo Delgado

The northern province of Cabo Delgado in Mozambique is one of the poorest regions in the country. Since October 2017, Cabo Delgado has been suffering violent attacks from a Non-State Armed Group. Over the past year, these attacks grew in strength and brutality, as illustrated by the latest major attack on Palma in the end of March. While the reasons for this conflict might be multifaceted, its consequences are strikingly clear: nearly 700 thousand people are displaced, living with fear, insecurity and a lack of access to basic needs for survival, including food, water, shelter and healthcare.

Here are five things you need to know about how this conflict is affecting the people in northern Mozambique:

1. Hundreds of thousands of people have been displaced

In March 2020, international organizations estimated that 156 thousand people had been displaced in Cabo Delgado.

Now, a little over a year later, the estimations have quadrupled, reaching nearly 700 thousand people that have been forced to leave their homes due to the escalating violence in Cabo Delgado. 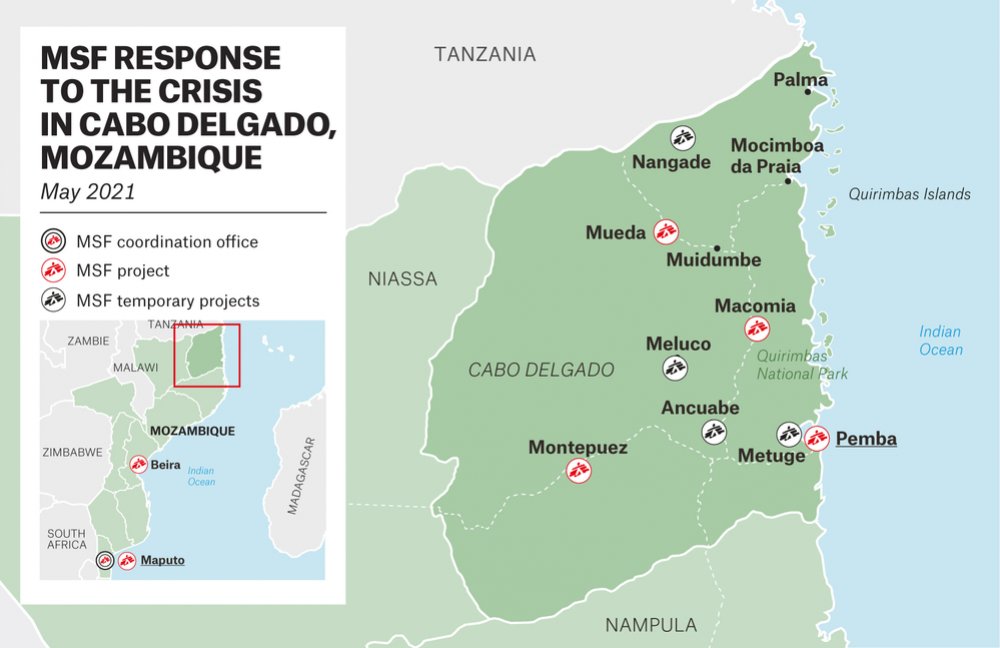 Entire villages have been burned to the ground, many have seen relatives being killed in front of them, others have had their loved ones disappear, without knowing if they will ever come back.

Thousands of people have fled to the bush, where they have spent several days walking in fear of being found, without access to water or food in search of safety.

"Many experience constant fear of another attack"

Host communities and resettlement camps are overcrowded, and people have been living in extremely poor and unsanitary conditions.

2. People flee with nothing and are in need of everything

People often flee hand to mouth and arrive to bigger towns like Pemba or Montepuez in very poor conditions.

After many days of walking through the bush, scared and without access to food or water, men and women, including the elderly, and children need everything. 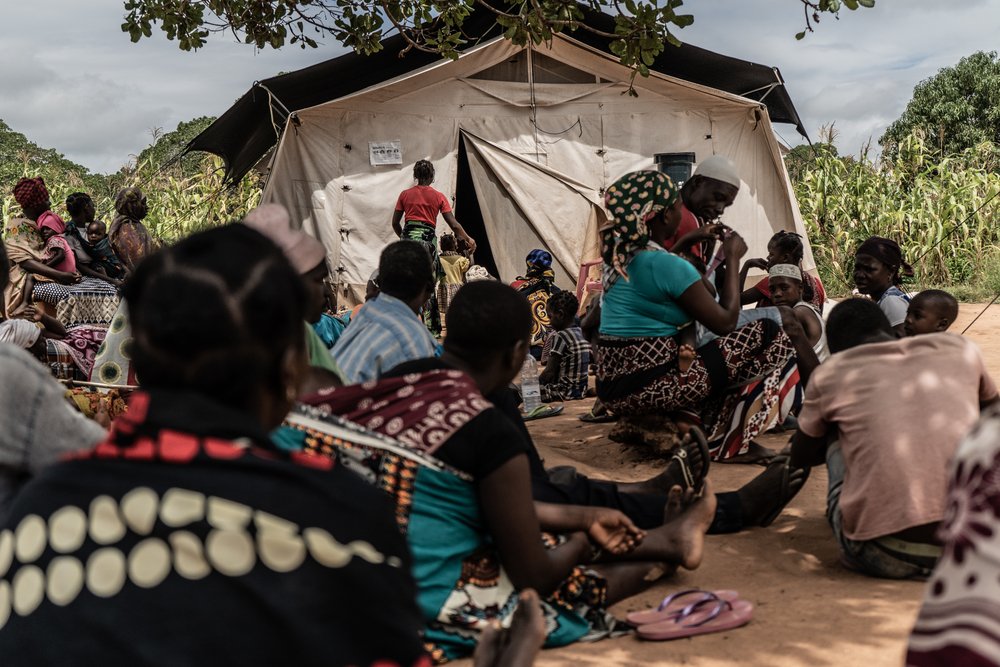 Tadeu Andre/MSF
Patients wait in a clearing under a tree to be seen by a medical team providing consultations out of a mobile clinic which MSF is running in the Nicuapa reallocation site for internally displaced people fleeing armed conflict in Cabo Delgado.

A place to sleep at night, tents or material to build their own hut, mosquito nets to protect them from malaria, clothes, blankets, food, water and medical care.

Families have left their entire lives behind in search of safety, but their journey is only the first obstacle they must overcome to find stability as the conflict in Cabo Delgado shows no signs of being resolved.

After having escaped the violence and survived the long and difficult journey to reach the resettlement camps and host communities, people have yet another challenge to face: dealing with the trauma. 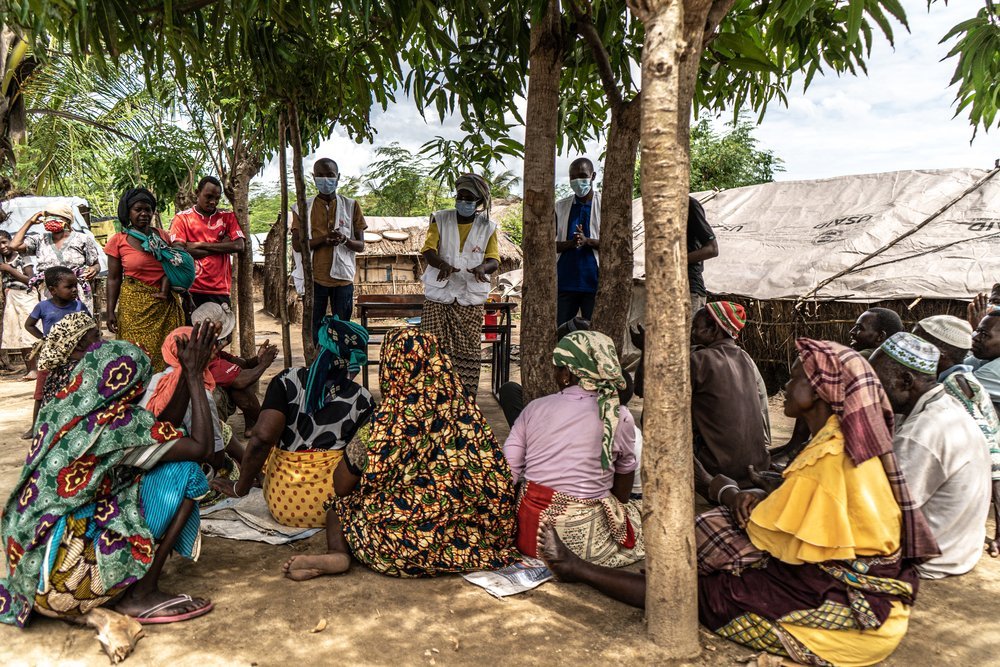 Tadeu Andre/MSF
A mental health session is conducted with people who have sought shelter in the Nangua camp for internally displaced people. These sessions are used to help those displaced by the armed conflict in Cabo Delgado talk about their experiences.

As they struggle to cope with a lack of access to food, water, clothing and healthcare, most are also trying to adjust to their new life.

However, a feeling of hopelessness and frustration overcomes them as every aspect of life as a displaced person proves to be a struggle.

Many are suffering from post-traumatic stress disorders, have problems sleeping and have nightmares.

They have lost their appetite even though they haven’t eaten for days.

The separation from loved ones and lack of news also brings anxiety as reunification seems impossible. Moreover, many experience constant fear of another attack.

As the mental health programme in Mozambique is not very developed, providing this service has become one of MSF’s priorities in Cabo Delgado.

4. An already fragile health system has been further impacted

According to the UN, about 36 per cent of health facilities across the province have been damaged or destroyed because of the violence.

By the end of 2020, there were no functional clinics in Mocimboa da Praia, Macomia, Muidumbe, and Quissanga, districts that have been hit especially hard by the conflict.

Palma has been added to this list following the recent attacks at the end of March. 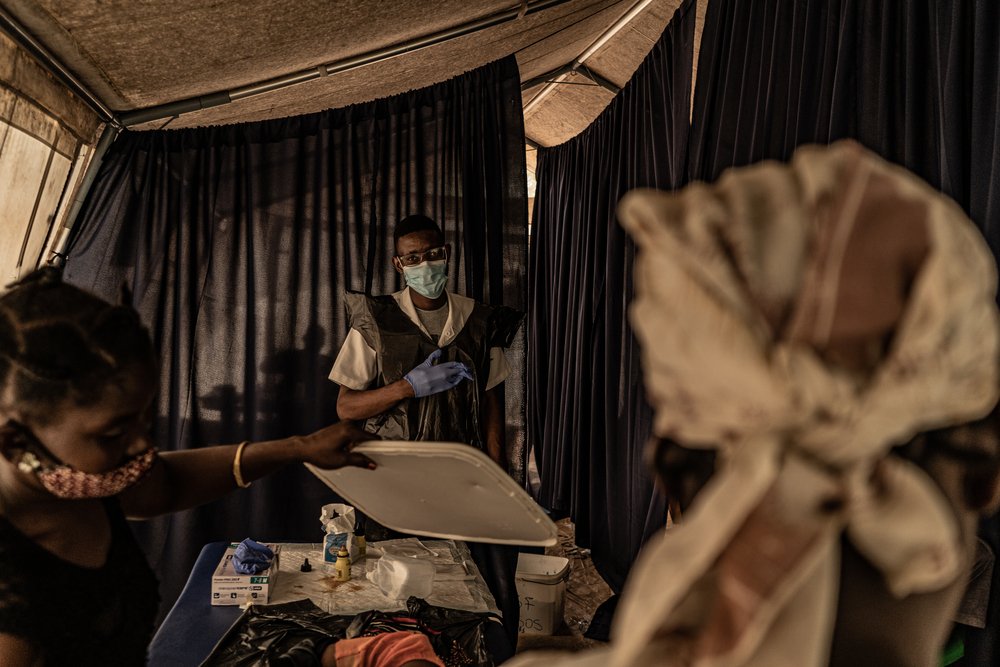 The insecurity in certain areas of Cabo Delgado prevents the government and humanitarian organizations from providing critical care, such as sexual and reproductive healthcare, immunizations, and access to drugs and treatment for HIV and tuberculosis, which have very high prevalence in Mozambique.

5. The needs outweigh the current humanitarian response on the ground

As the number of people displaced by the conflict in Cabo Delgado continues to increase quickly and without halt, the basic needs of IDPs and the communities that host them remain largely unmet. 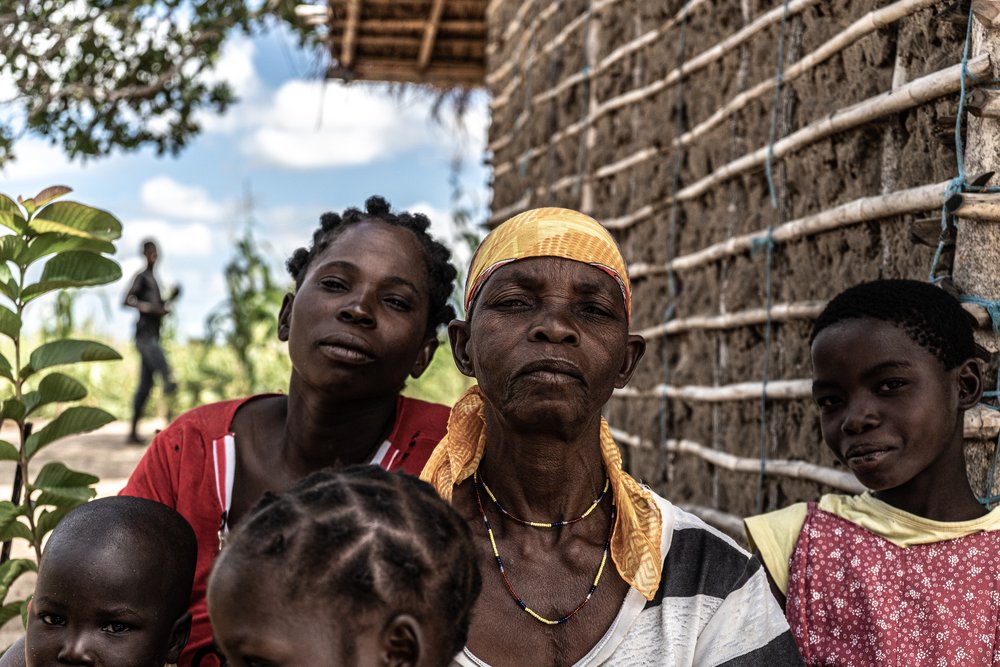 Tadeu Andre/MSF
For families who have been unable to find land in the camps for internally displaced people the only alternative is borrowing or sharing land with friends or family in an area where space and food is already stretched.

The national efforts to provide a response are insufficient and while UN agencies and some international organisations are present in the province, currently they only have the capacity to cover a fraction of the growing needs of the affected people.

MSF has expanded its medical activities over the last months, implementing mobile clinics that provide access to medical care to several districts in the province, water and sanitation interventions ensuring access to safe water as well as mental health support.

MSF’s main concerns health wise remain responding to malaria, diarrhoea and respiratory infections, which are the main diseases we are treating in our facilities.

We intend to continue operating in Cabo Delgado, providing medical care and related services to as many as we can, but our presence remains limited due to administrative hurdles and restrictions.

There is an urgent need to scale up the overall response by bringing in additional humanitarian staff and supplies to respond to this egregious crisis.