Mozambique: "It's extremely volatile - with people moving both to flee violence and return home"

Paulo Milanesio is a project coordinator for Médecins Sans Frontières/Doctors without Borders (MSF) in Mueda, a town in the north of the Mozambican province of Cabo Delgado, where hundreds of thousands of people have sought refuge from ongoing conflict. 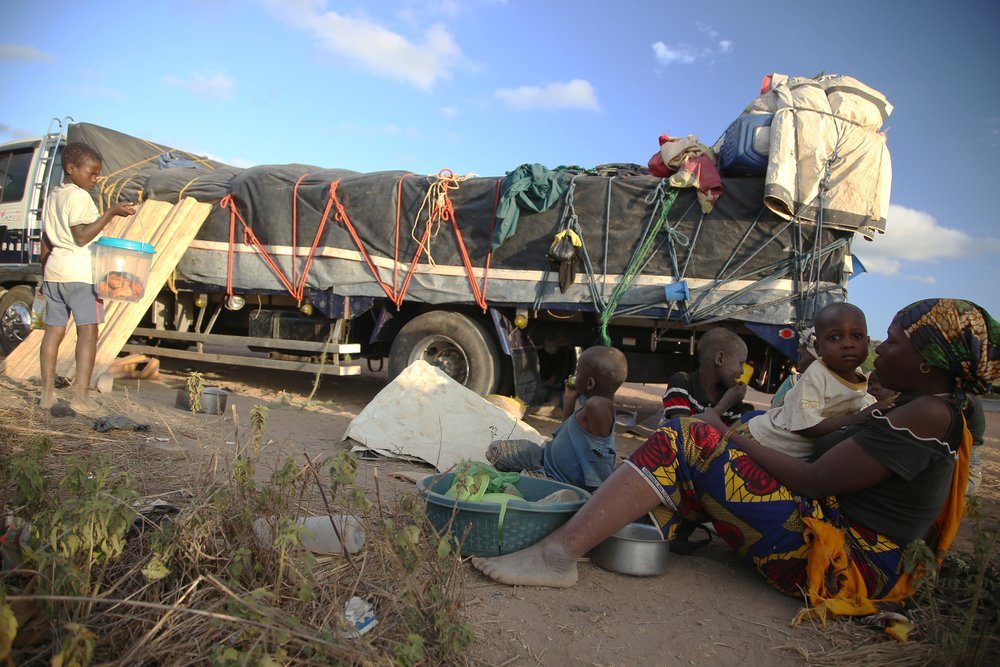 MSF
People displaced by the conflict in Cabo Delgado, a northern province in Mozambique, wait next to a truck on the outskirts of Mueda. (December, 2021).

The conflict in Cabo Delgado has been ongoing for over four years. How is the situation today?

During 2020 and the first half of this year, there was intense violence including fighting and attacks by non-state armed groups against villages and large towns.

This forced masses of people on the coastal strip and northeast of Cabo Delgado to flee their homes and seek refuge in transit and resettlement centres located in the west and south of the province. 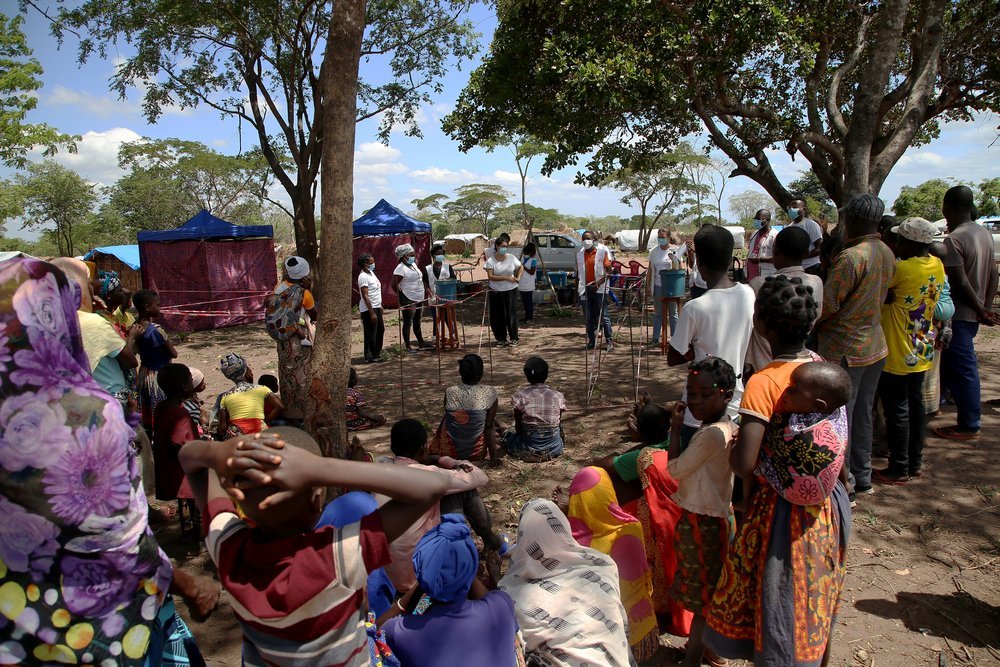 MSF
Ahead of opening a mobile clinic, members of an MSF team introduce themselves in the local language of a host community. (December, 2021).

There are currently hundreds of thousands of people* here, many of whom have been displaced for a year or even longer.

In recent months, the armies of Mozambique and other allied countries in the region have launched offensives to regain control of areas where people have fled from.

Some of the retaken areas have been prepared or are being prepared for those who have left to return. 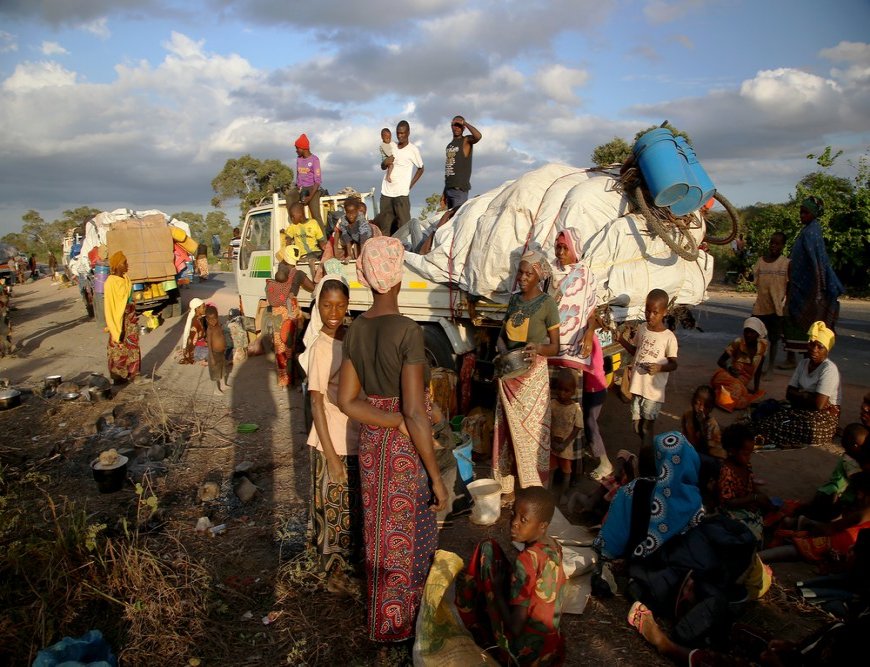 At the same time, the recent offensives have forced non-state armed groups to disperse and the violence has lessened, however there are still frequent outbreaks of conflict that continue to force people to flee.

Mueda is located 100 and 180 kilometres respectively from Mocímboa da Praia and Palma, two of the main cities attacked in Cabo Delgado months ago.

What do MSF teams see there?

We opened the project in Mueda in March to ​​offer medical and humanitarian assistance to people fleeing the conflict at a closer stage of their flight. 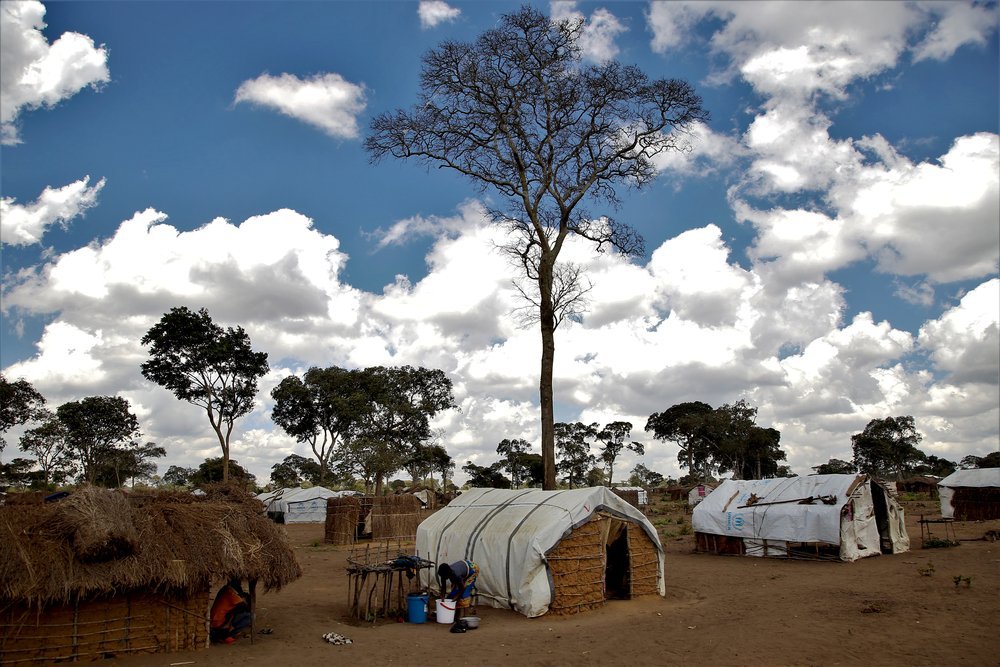 MSF
A woman washes clothes next to her tent in Eduardo Mondlane, a resettlement site for displaced people in the town of Mueda. (December, 2021).

In this mountainous town there are about 12,000 displaced people living at the resettlement site of Eduardo Mondlane, which was created in April.

From there our mobile teams move to different points in the districts of Mueda, Nangade, Muidumbe and Mocímboa, where there are several hotspots of displaced communities (about 50,000 people in total), who have arrived mainly from Palma and Mocímboa. 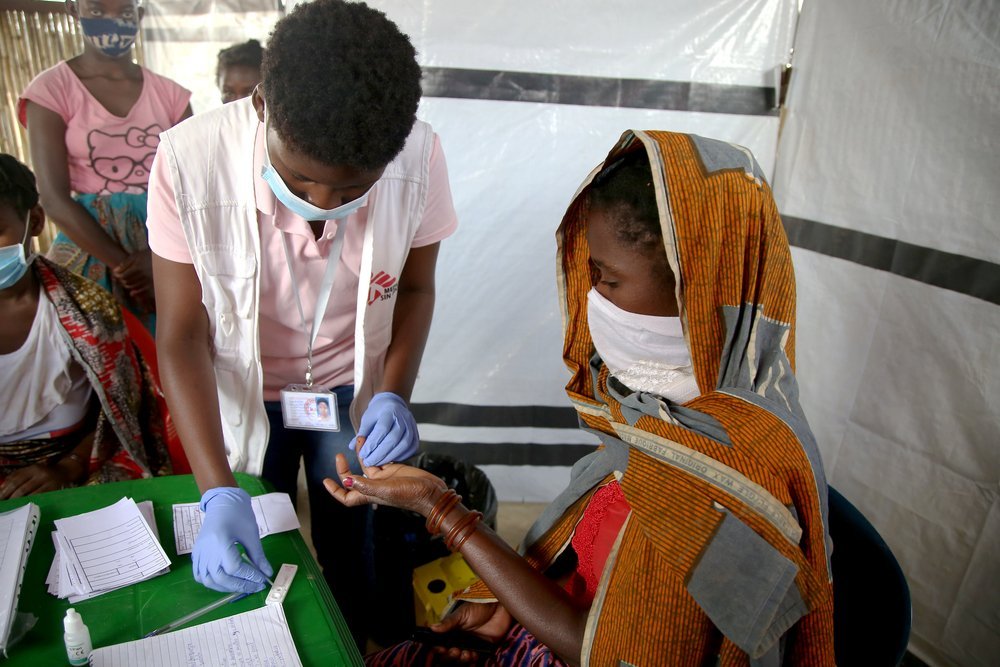 MSF
A nurse administers a malaria test for a woman at an MSF health post in Eduardo Mondlane. (December, 2021).

From Mueda we also reach Negomano, on the border with Tanzania, from where some displaced people sometimes reenter after a brief stay in the neighbouring country.

In large areas of these districts the health system has been badly affected by the conflict; some structures have been attacked and medical staff have left. 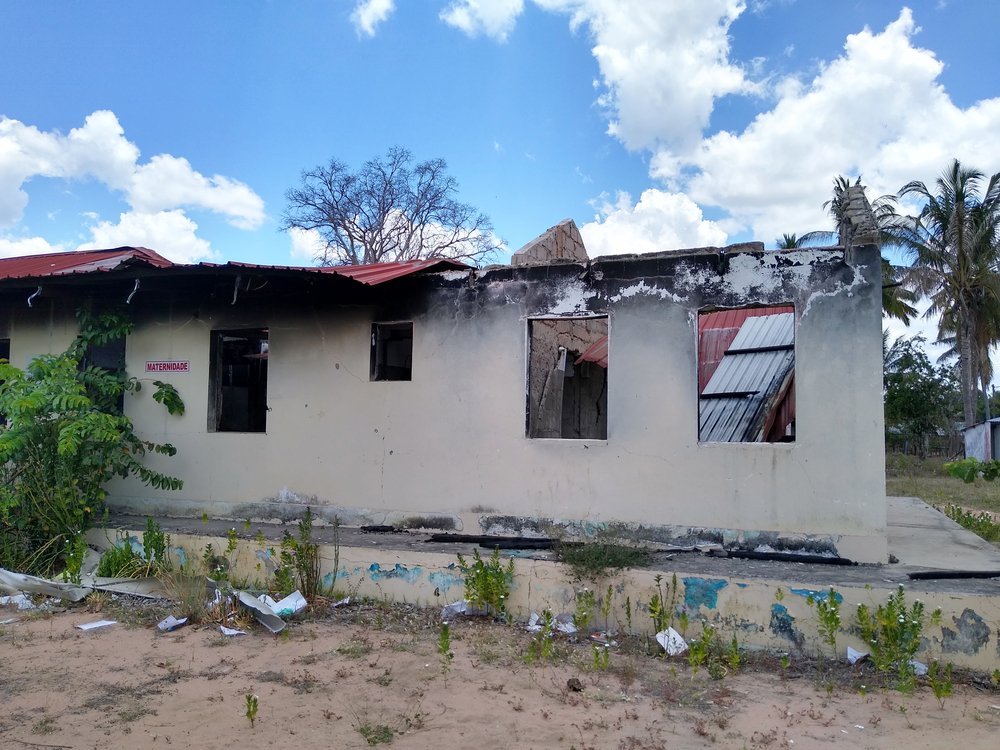 MSF
As a consequence of an attack, the maternity of the health centre in Diaca, in the northern Mozambican province of Cabo Delgado, lies in ruins. (December, 2021).

Many areas are now like ghost towns since people have fled. In other places public health centres are functional and there is a return to normality as some people are gradually returning.

Other people still don’t feel safe enough to return, but they go back briefly to check on their houses and crops.

Then they return to the places where they have sought refuge. 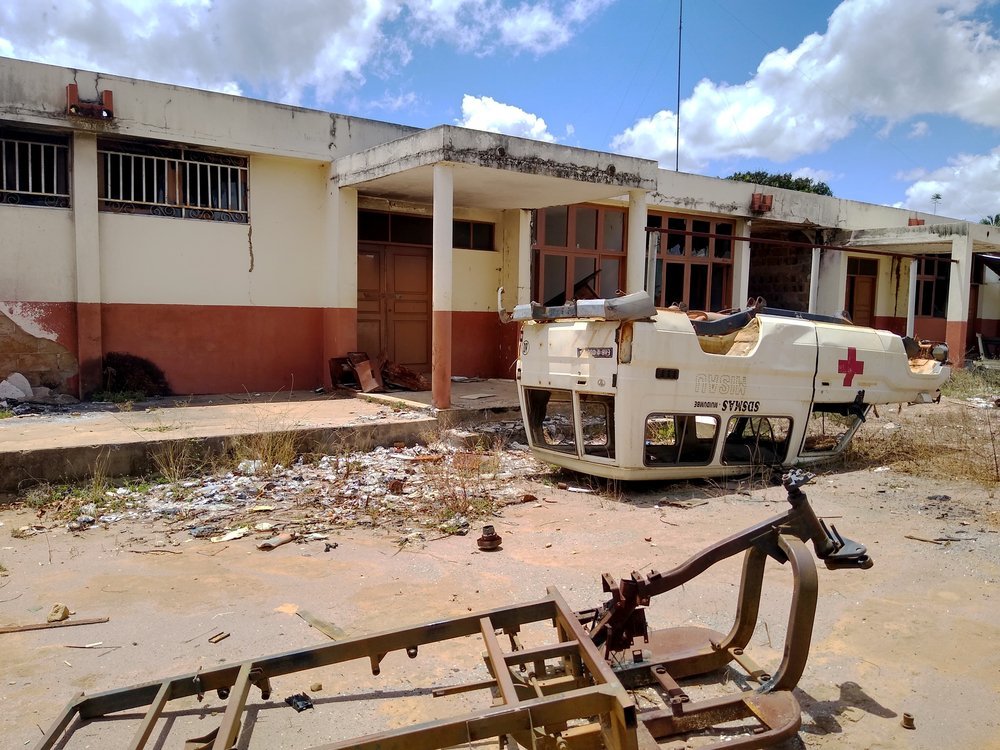 MSF
Image of a destroyed ambulance of the health centre in Muatide, in the district of Muidumbe. (December, 2021).

There is a constant struggle to get home.

Your home is always your home.

So even if things are still uncertain many prefer to try to return to the place where they have something, no matter how little, instead of staying in a transit or resettlement site in very precarious conditions. 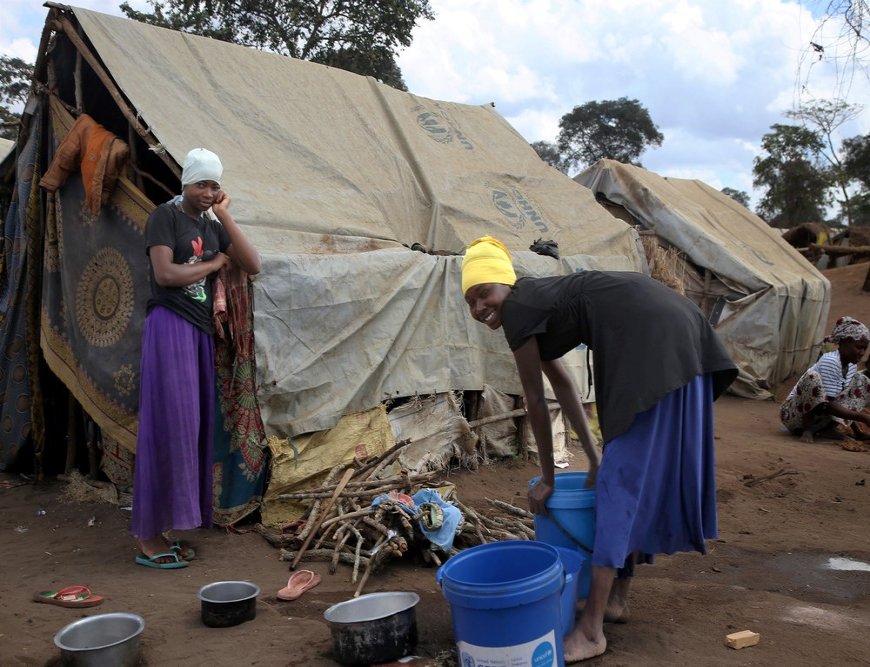 MSF
A girl washes clothes next to her tent in Eduardo Mondlane, a resettlement site for displaced people in the town of Mueda. (December, 2021).

We see people who even sell their mobile phones to pay for the transportation.

They are driven by hope.

At the same time, outbreaks of violence provoke sudden movements – sometimes a rumor is enough to trigger despair.

Violence is so unpredictable that people have to leave with only the clothes on their back.

It is extremely volatile with people moving in different directions both to flee violence and return home. 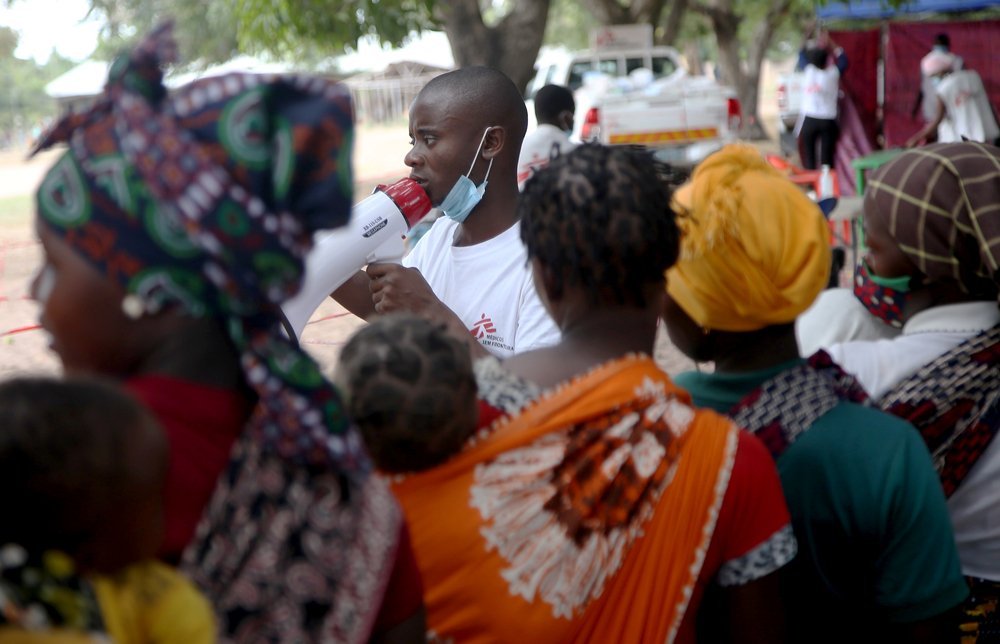 MSF
Health promoter Juma provides instructions to people gathered at an MSF mobile clinic in the village of Nanili. (December, 2021).

This requires our team to be reactive as it is important that we can accompany them to guarantee a minimum of health and humanitarian services during their flight, displacement and return.

How is the conflict affecting people?

It may not be a medical emergency, but it is certainly a humanitarian emergency. 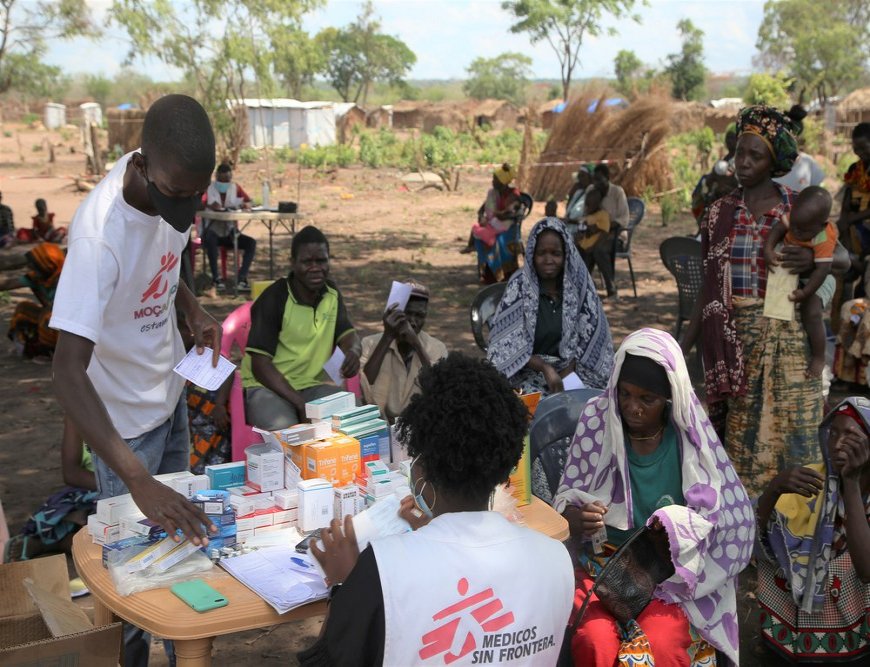 MSF
Nurse Vilelina provides medicine at the dispensary point of an MSF mobile clinic in the village of Nasitenge. (December, 2021).

The medical conditions we see are usually basic.

Humanitarian aid is concentrated in more stable points in the south of the province, close to the capital, Pemba. However, in large areas of the north none or few aid organisations are present.

This forces us to diversify our activities and adapt.

When we come across a group of displaced people in these areas, they often have very little, so we also provide access to drinking water, food, shelter or materials to build a house. 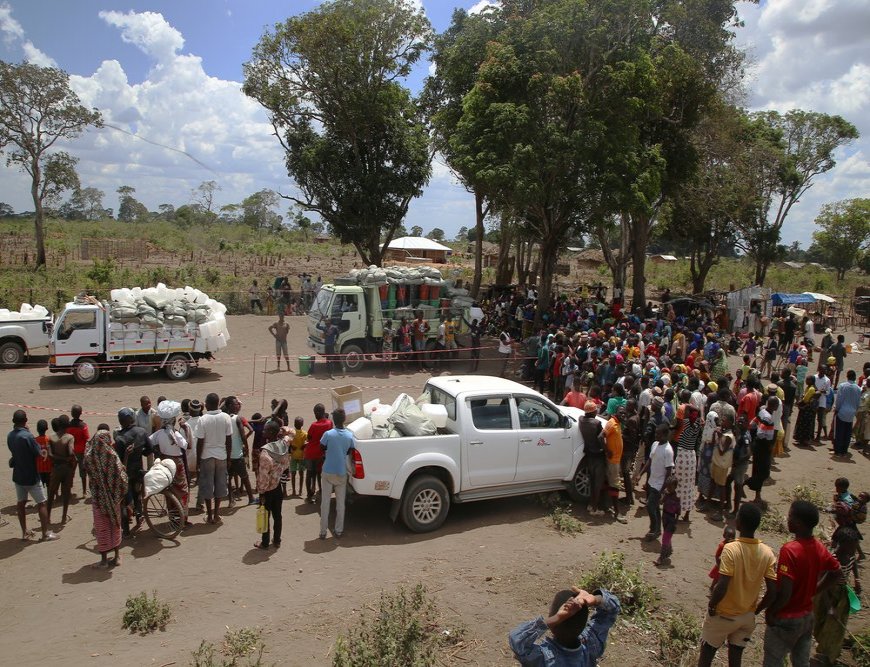 We have even had to buy clothes and flip flops for people who had walked for long periods of time.

You can't only talk about malaria with someone who has lost everything.

There are people who have been living in the bush for months, some even more than a year, in dense and inhospitable areas. 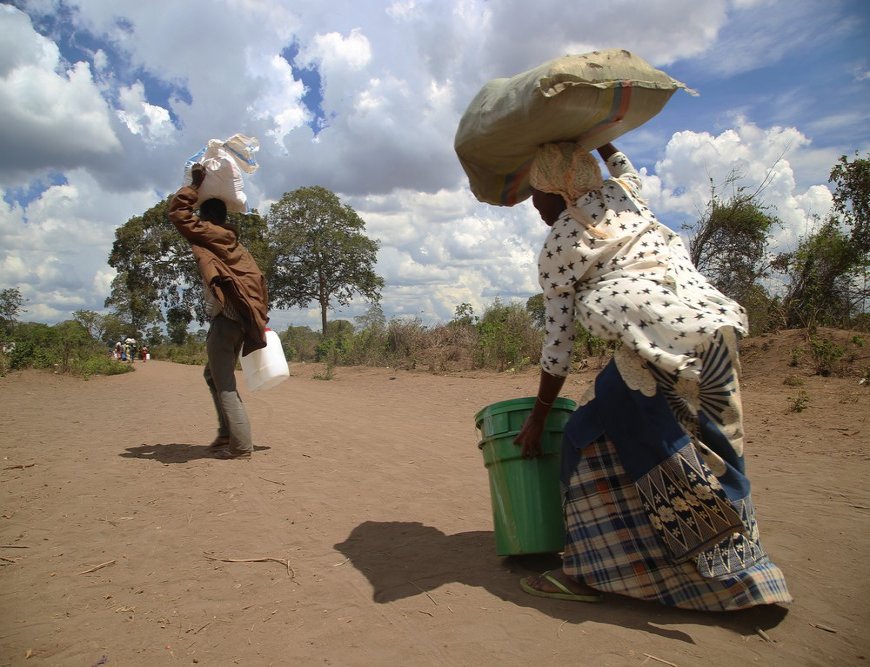 MSF
A man and woman carry a set of relief items distributed by an MSF. (December, 2021).

They arrive in a deplorable state, they have eaten only what they could find on the way: plants, vegetables, some animals they hunted. They are usually elderly people, with malnutrition, anemia and their clothes practically destroyed.

Sometimes people have been alone for a long time. 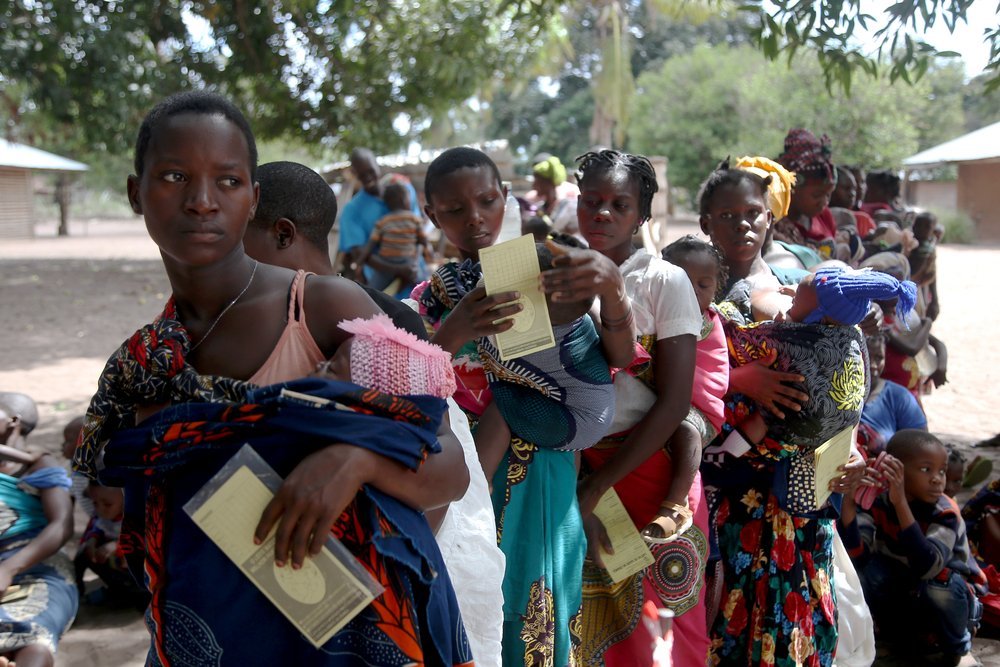 MSF
Women carrying children queue at an MSF mobile clinic in the village of Nanili. (December, 2021).

If they have chronic diseases such as tuberculosis or HIV, which is highly prevalent in Mozambique, they are in bad shape because their treatment has been interrupted. We also see a lot of respiratory problems and hypertension.

Apart from these complex medical conditions, people are also suffering from psychological issues.

Almost all families have experienced trauma. 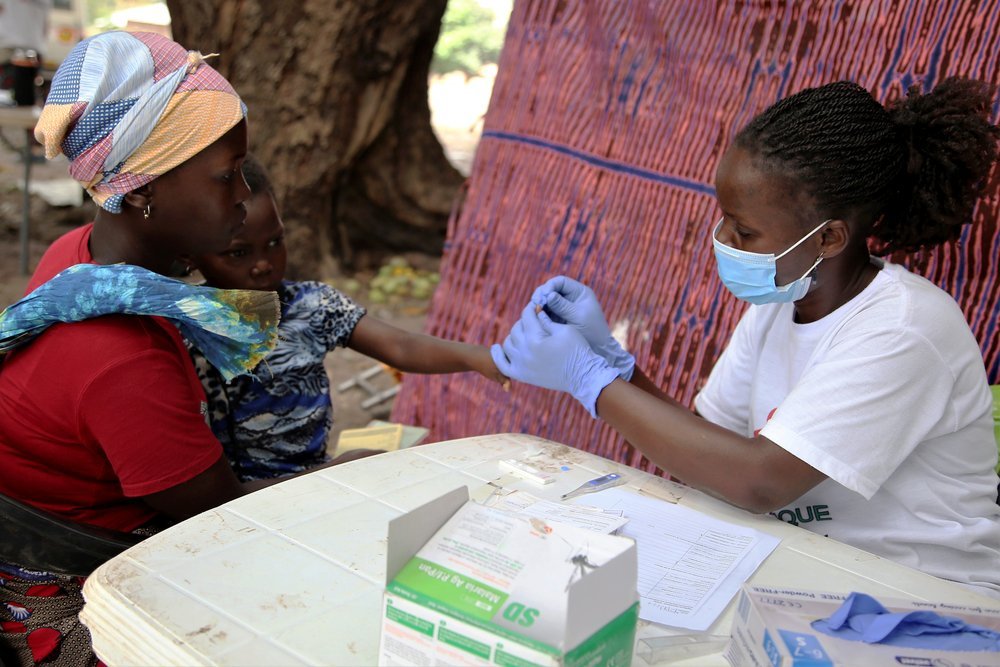 MSF
Nurse Benvinda screens children accompanied by their mother and elder sister at an MSF mobile clinic in the village of Nanili. (December, 2021).

Some of our patients are so fragile that they cannot even make eye contact with people. They have witnessed or suffered violence, or even lost their homes.

All these experiences have had a very negative effect on their mental health. Some people have also lost contact with relatives. 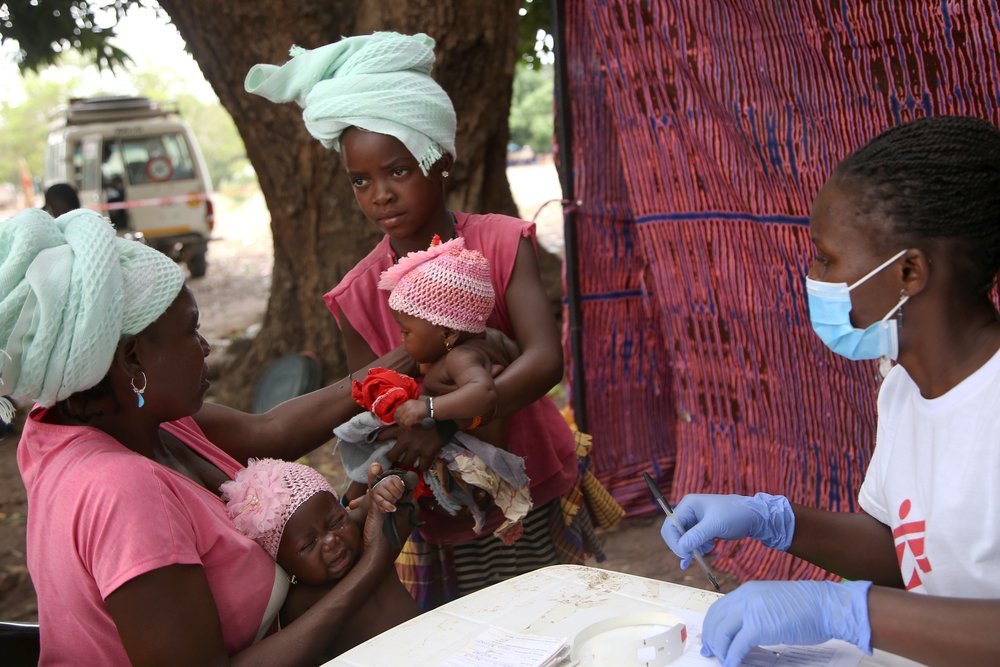 We also frequently find orphaned children, who have seen their parents die or who were kidnapped by armed groups, as well as parents who do not know the whereabouts of their children.

What does MSF do to help?

In Mueda, we provide technical support to the rural hospital and run a health post in the main site for displaced people. 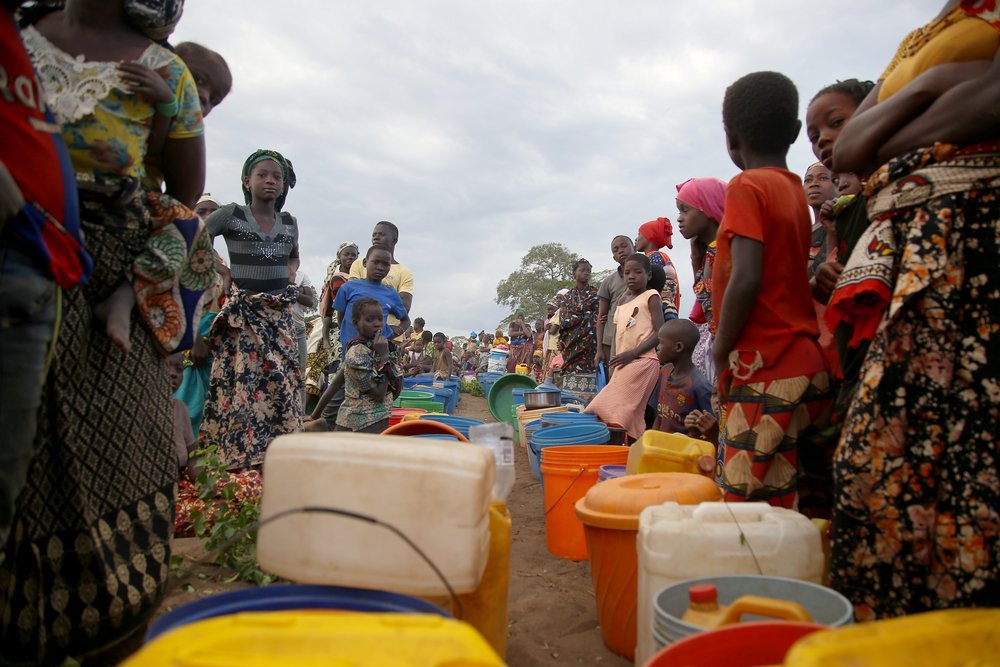 MSF
Dozens of women and girls queue for water after MSF trucked 8,000 litres of water to an open space on the outskirts of Mueda. (December, 2021).

We also manage a water point and supply others as the lack of access to drinking water has deteriorated significantly.

We have a team of midwives to monitor pregnant women and a team of vehicles on alert to refer serious cases to the hospital. 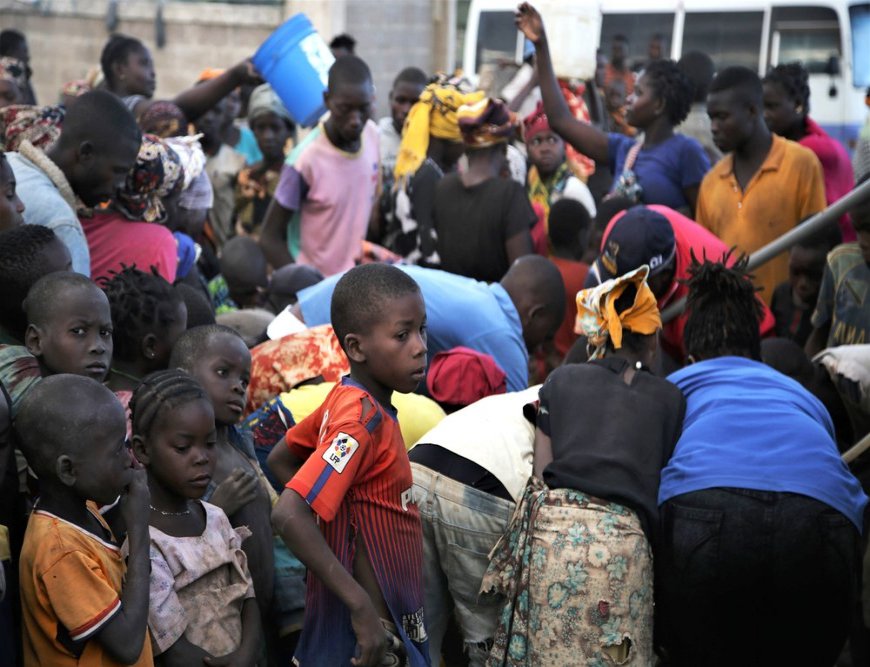 MSF
Children observe a water distribution organised by MSF on the outskirts of Mued. (December, 2021).

In addition, we distribute aid kits for recently displaced people, do health promotion and, now that the rainy season is approaching, a lot of work to prevent the spread of diseases such as cholera and malaria.

We also provide psychological support through our mental health team.

Outside of Mueda, we run mobile clinics in various locations where we distribute aid kits. 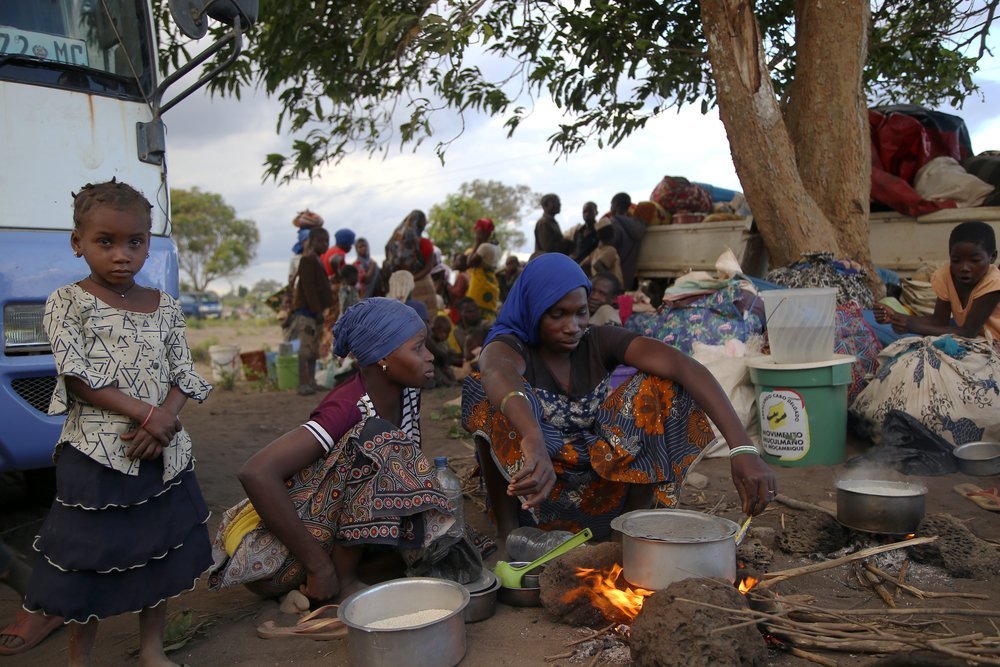 MSF
A woman cooks over an open fire, on the outskirts of Mueda, in the northern Mozambican province of Cabo Delgado. (December, 2021).

We offer two kinds of aid kits: one that we call a transit kit, which is lighter and includes food and basic utensils for people on the move.

The other is for those who are settled, which is much more complete, and allows people to build a shelter. It includes tarpaulins, food for several weeks and other objects. 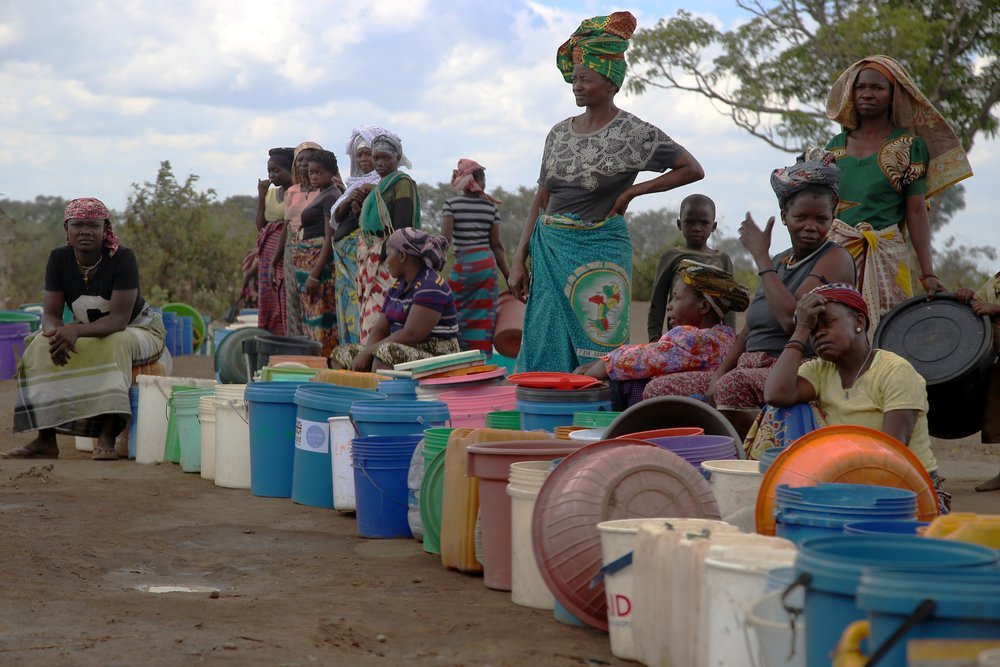 We also support a network of 70 community health workers who are part of the Ministry of Health.

They are essential, since they work in rural areas ensuring access to treatment for common diseases such as malaria, diarrhoea or identifying cases of malnutrition. 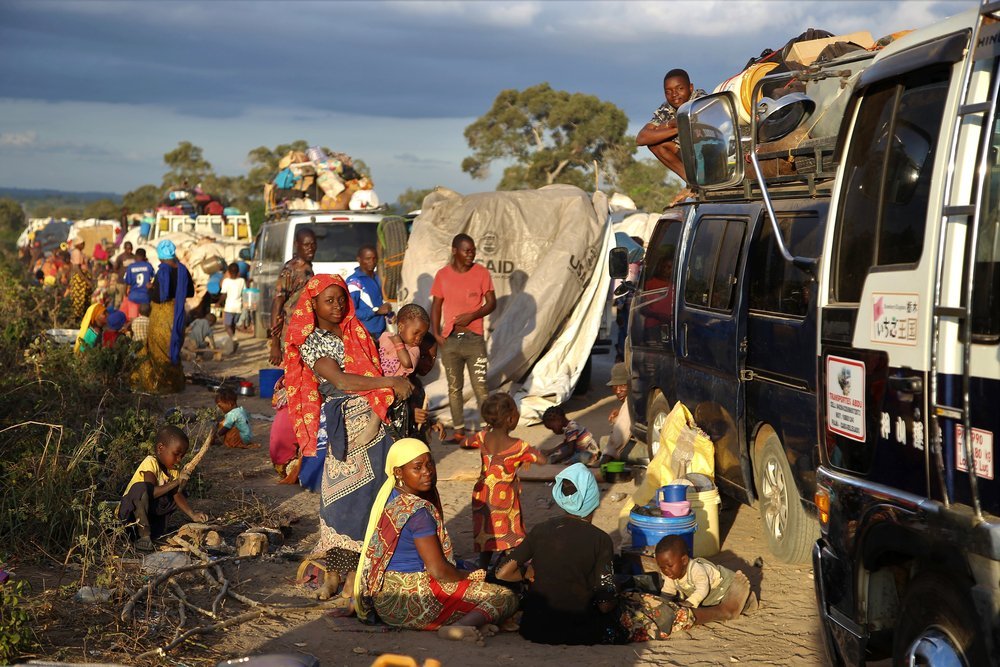 MSF
Palma, a coastal town that was attacked earlier this year and where some people have already gradually returned. (December, 2021).

They are the first link in our chain as they allow us to be in close contact with communities. Through these key workers, we learn almost immediately when sudden people movements occur, and we then prepare an assessment and respond within 24 hours if security allows. 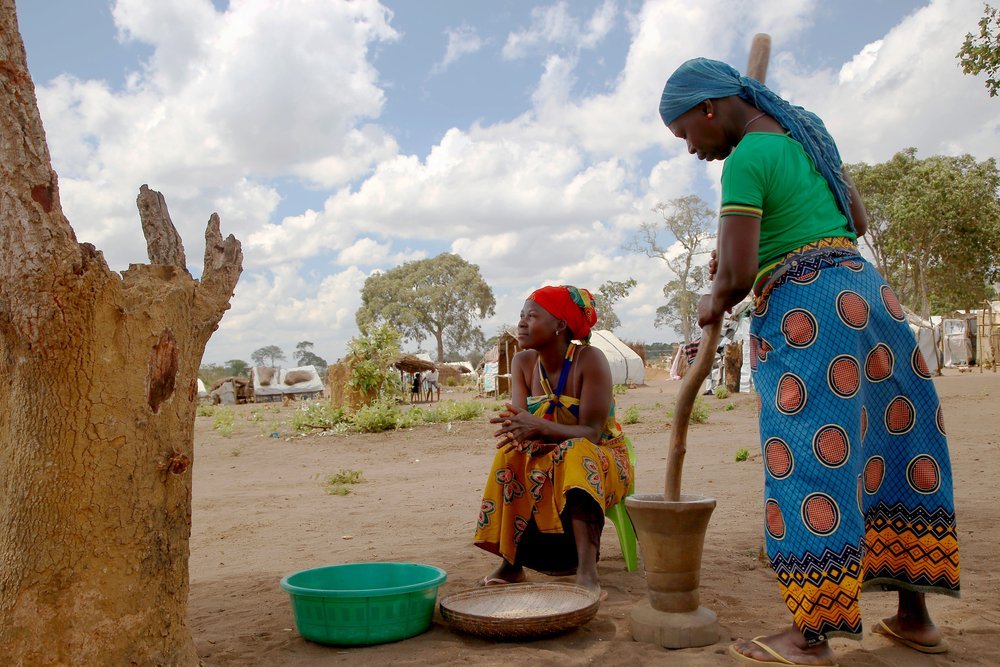 MSF has been present in Mozambique since 1984. In Cabo Delgado our teams also manage stable projects in Metuge, Macomia and Palma, and maintain a surveillance structure in Montepuez, where we ended our medical activities last October.

*There is currently around 750,000 internally displaced people in Cabo Delgado according to the UN.