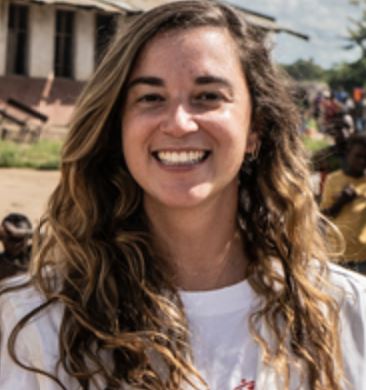 Mozambique: “They thought the camera was a gun”

In April, following the horrific attacks in the city of Palma, MSF’s Amanda Bergman and Tadeu Andre travelled to Cabo Delgado province to document the unfolding humanitarian situation. Here they reflect on their experiences.

As you travel from Pemba, capital of the northern province of Cabo Delgado, to Montepuez, its second largest city, you see countless baobab trees and the most beautiful birds, such as Zanzibar red bishops and Bertram’s weavers, flying across the landscape. 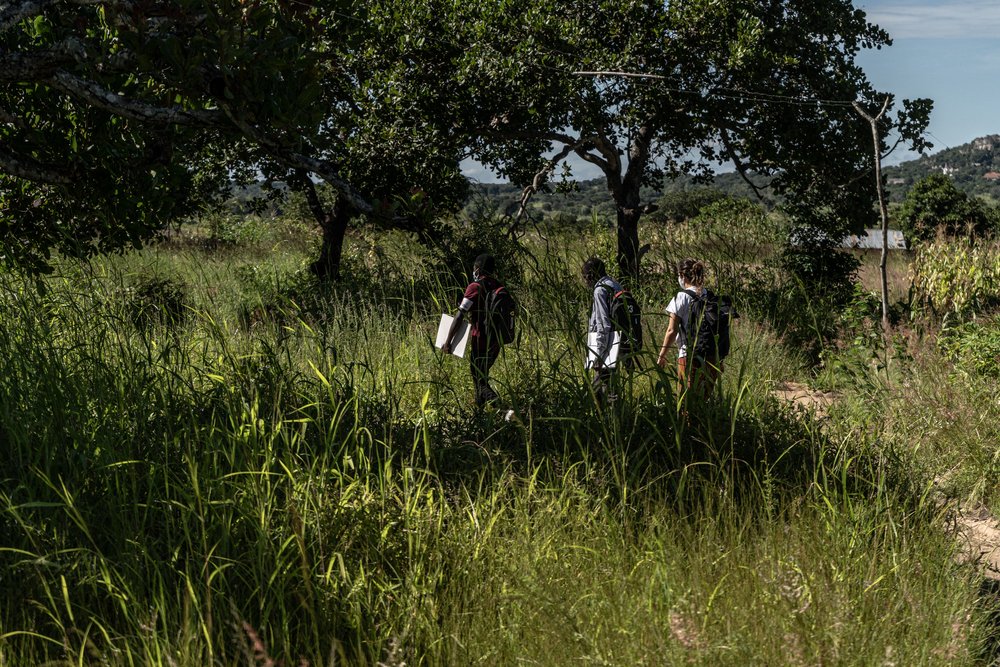 Tadeu Andre/MSF
Nelson (L) and Ibrahimo (R) are part of a health and mental health promotion team working in the communities in and around Montepuez where many families that have fled the fighting in Cabo Delgado have sought shelter.

You also see many people walking alongside the road, carrying small colourful bundles containing their belongings.

Many of them ask for lifts, money or food, telling you they are hungry because they haven’t eaten in days.

In addition to being the poorest province in one of the poorest countries in the world, Cabo Delgado has been ravaged by conflict since 2017.

Hundreds of thousands of people have been displaced and are in dire need of humanitarian assistance.

MSF has been working in Cabo Delgado since 2019 and, as members of MSF’s communications department, part of our job is to document MSF’s activities in the country.

On our way to Montepuez, we saw a new resettlement camp was being set up. We stopped the car and, within minutes, a woman approached us.

She said: “You need to help us, we are hungry.”

She and her son had been sat at the side of the road, their belongings piled up next to them, hoping for transport to take them to Pemba. 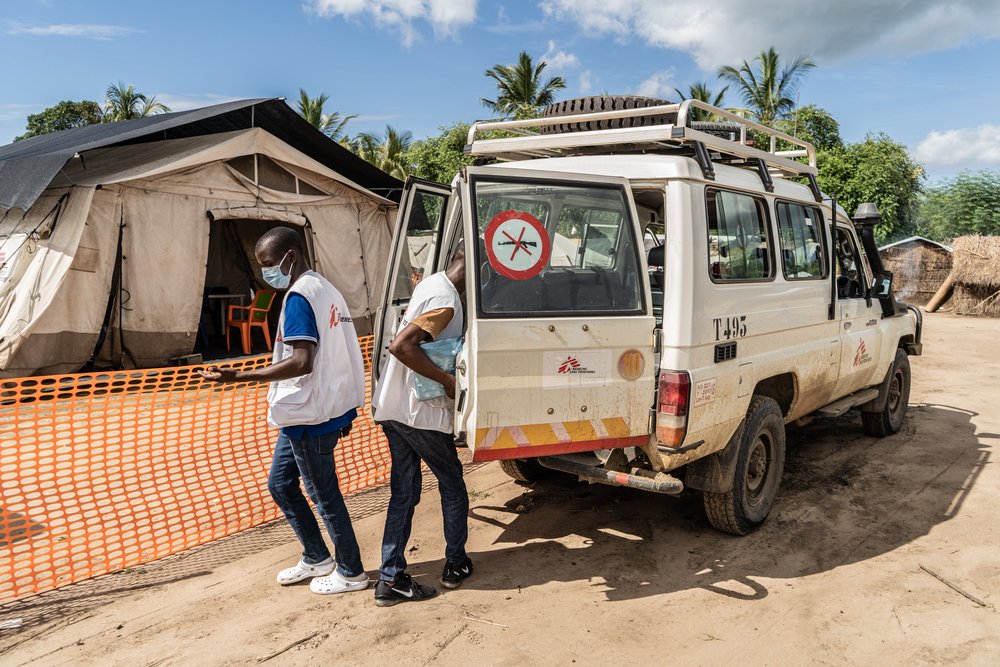 Tadeu Andre/MSF
The MSF mental health team load into a car following a group consultation session at the Nangua camp for people who have been displaced by the fighting in Cabo Delgado, Mozambique’s Northern most province.

They had fled their village because of the violence and were in search of a place to settle, somewhere they could start over again.

Like thousands of others, they were in search of safety but unsure of where they would find it or how long that safety would last.

In Montepuez, MSF teams are providing mental health support and health promotion activities for the displaced people and the communities that host them.

"Many of the people our teams speak to ask for headache tablets and medications for other ailments, not realising that they are experiencing the physical manifestations of the trauma they have been through"

Our community health workers go from door to door to explain who MSF is, what we are doing and the type of care they can get. 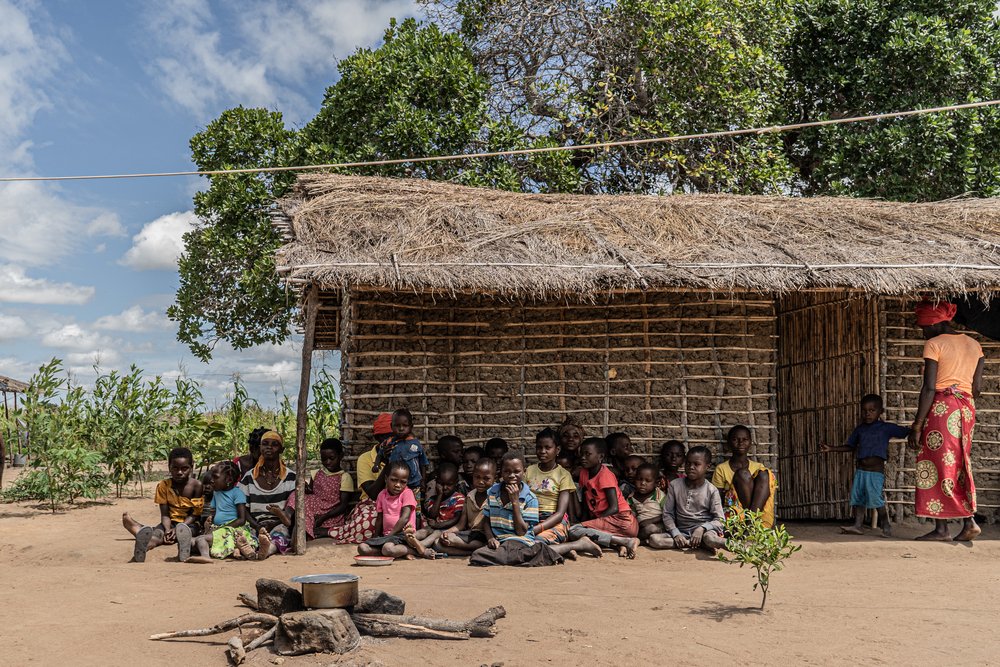 Tadeu Andre/MSF
This family who escaped armed attacks in Mucojo are now living on borrowed land outside Montepuez. There are dozens of children some of whose mothers are now in hospital. Their grandmother spoke of the family having to live off of 1 ladle of rice a day.

The teams talk through the signs and symptoms of conditions such as post-traumatic stress disorder and other common mental health problems.

Mental health is something that isn’t often discussed in these communities.

Many of the people our teams speak to ask for headache tablets and medications for other ailments, not realising that they are experiencing the physical manifestations of the trauma they have been through.

We knew from our field teams that in many villages there were multigenerational families of up to 30 people living together under one roof after displaced families came looking for their relatives and a place to stay.

Overcrowding and a lack of food, clean water, sanitation and health services are a recipe for disaster and disease outbreaks, therefore it is important for MSF to reach these families.

The psychological effects of conflict

As we made our way through the green pastures outside the city, we came across two groups of children having classes under the shade of mushroom-shaped trees that provided them with some much-needed relief from the heat of the sun.

When the first group saw us, they waved and giggled, probably unused to seeing foreigners walking through their community.

However, the reaction of the second group of children was a bit different. 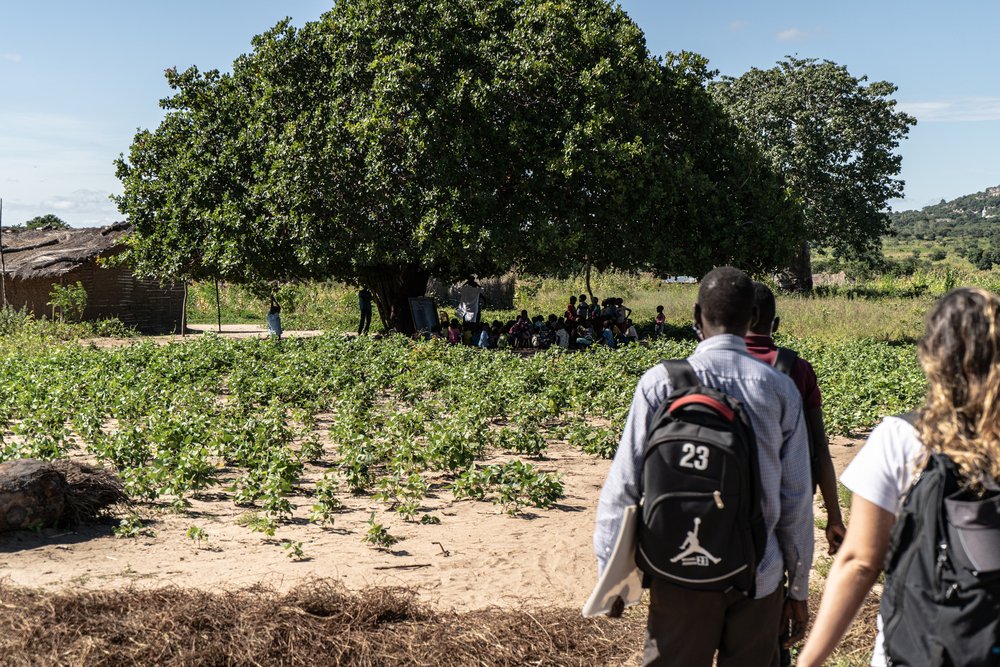 Tadeu Andre/MSF
Samuel and Ibrahimo are part of a health and mental health promotion team working in the communities in and around Montepuez where many families that have fled the fighting in Cabo Delgado have sought shelter.

They ran away, scattering into the bush and hiding behind trees.

We didn’t think anything of it until their teacher approached us and explained this was a class of mainly displaced children and, when they saw Tadeu with a camera in hand, they thought it was a gun.

We were shocked: to see children react to a camera – something that normally sparks curiosity and playfulness – as though it were a tool of destruction shows the effects of conflict on a person’s mind.

We apologised for disrupting the class and immediately put away the camera.

It’s heartbreaking to witness the psychological effects this conflict has on people.

"With no end in sight, the conflict will continue to displace and traumatise those who experience the violence firsthand"

Mental health support is a priority for MSF and our teams conduct daily activities with women, men and children affected by the violence. 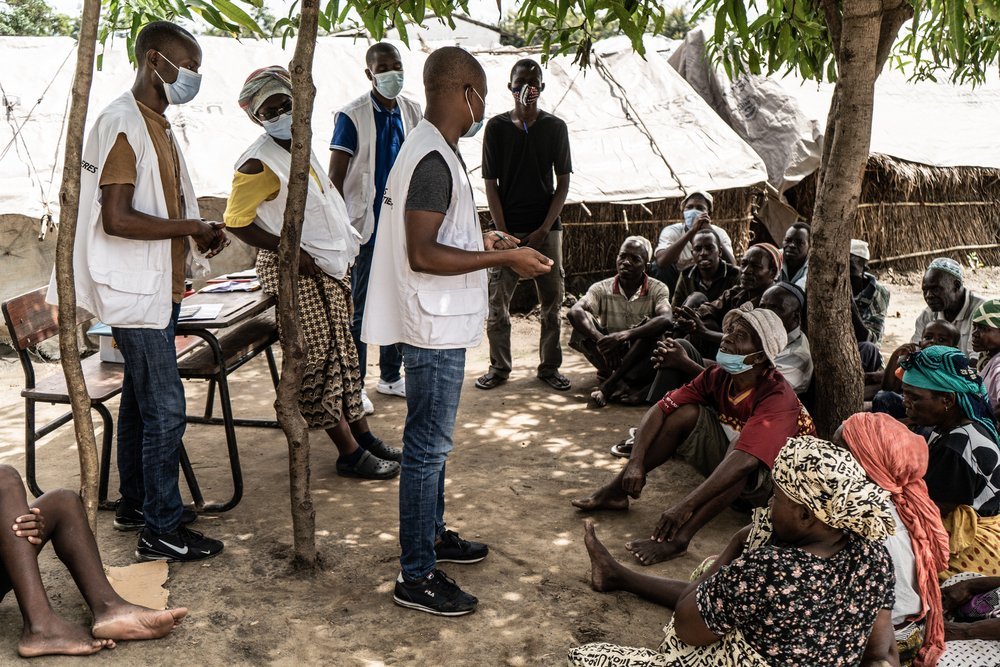 Tadeu Andre/MSF
A mental health session is conducted with people who have sought shelter in the Nangua camp for internally displaced people. These sessions are used to help those displaced by the armed conflict in Cabo Delgado get support for issues like PTSD.

Most have lived through unimaginable and painful situations and are now trying to move on with their lives, but the scars of emotional trauma are not so easily healed.

Those who can’t easily voice their sorrows show them in other ways.

One of the activities MSF does with children is to give them building blocks to help them to express themselves. Very often, with these blocks they build guns.

With no end in sight, the conflict will continue to displace and traumatise those who experience the violence firsthand.

For those who have escaped, the journey of rebuilding their lives has just begun and it is one filled with uncertainty.

Will this new life be a permanent home? A temporary shelter? No one can be sure. 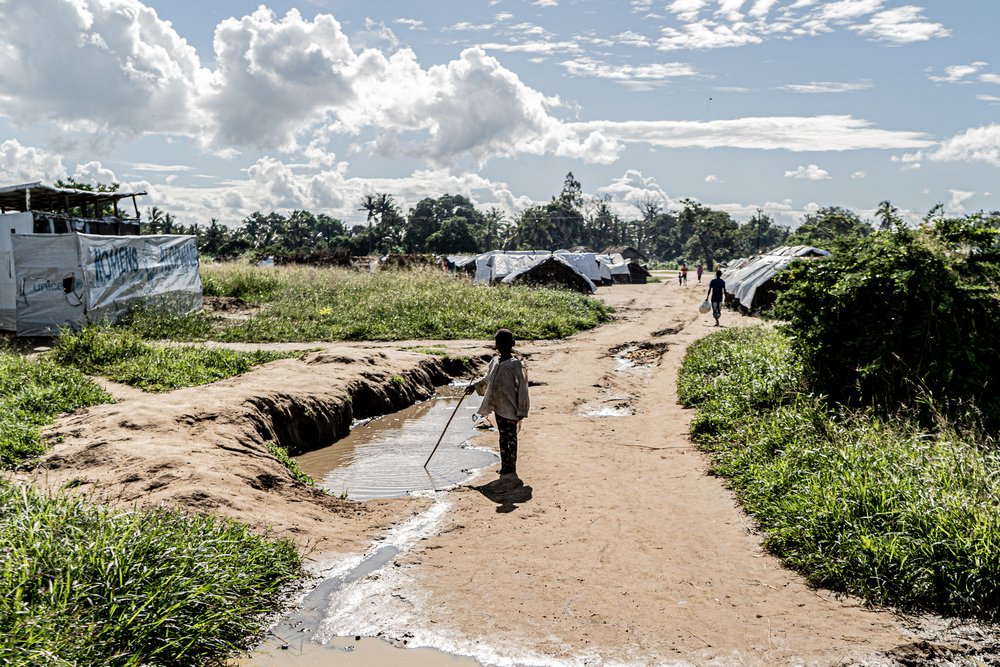 Tadeu Andre/MSF
A view of the 25 de Junho camp for internally displaced people in Mozambique’s Cabo Delgado province which has seen armed conflict resulting in hundreds of thousands of people being displaced.

Our colleagues will continue to provide support to as many people as they can, and we look forward to the day when children no longer confuse cameras with guns.