The northern province of Cabo Delgado is one of Mozambique’s most volatile regions, the scene of an intense conflict since October 2017, resulting in some 800,000 people fleeing from their homes. These are the latest developments.

1. The violence has moved south, leading to new mass displacement

Throughout June, fear of violence followed by confirmed attacks have triggered panic and mass movements of people from areas near the provincial capital Pemba that were previously considered relatively stable, such as Ancuabe and Chiure districts. More than 60,000 people are thought to be on the move as a result of the ongoing wave of violence.

This is the largest movement of displaced people so far this year. Many people have fled multiple times, forced on each occasion to abandon their few possessions and means of survival. 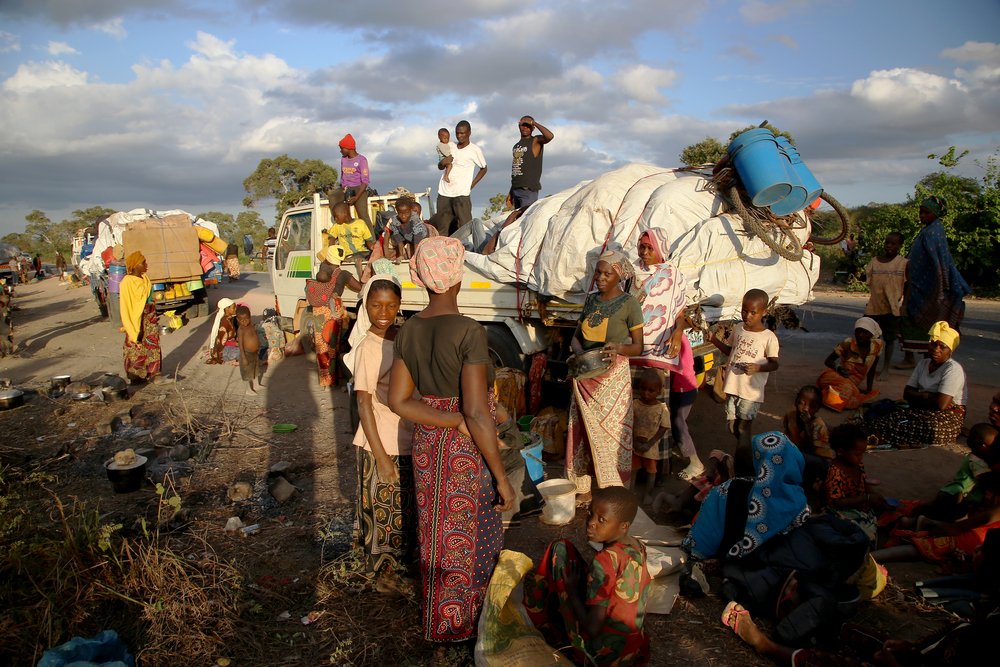 MSF
People displaced by the conflict in Cabo Delgado, a northern province in Mozambique, wait next to a truck on the outskirts of Mueda. They had previously been resettled in other areas of the province but are now aiming to reach Palma, a coastal town that was attacked earlier this year and where some people have already gradually returned. (December, 2021). 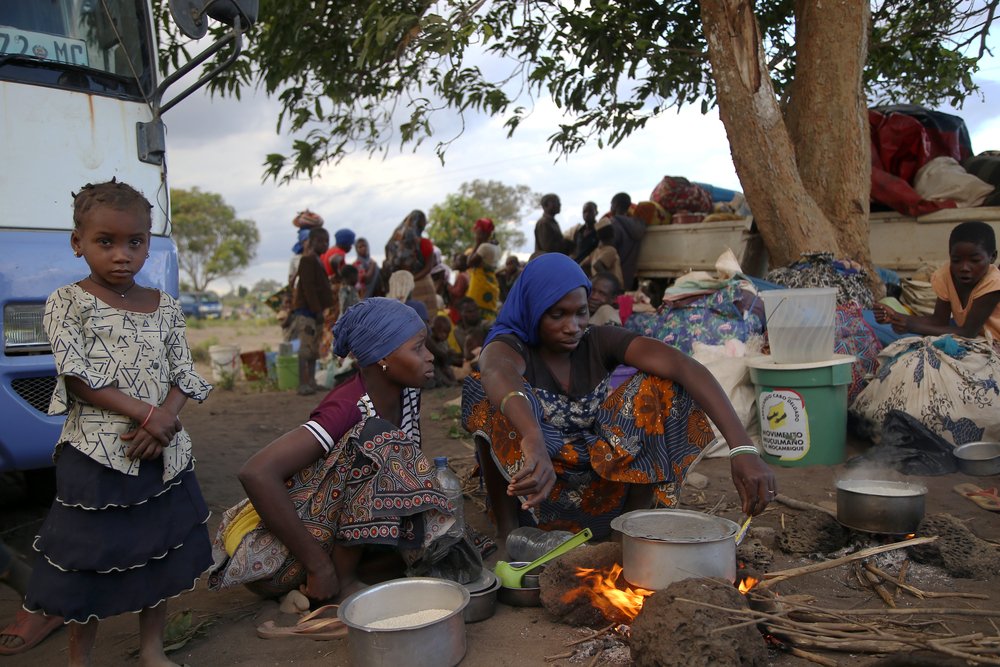 MSF
A woman cooks over an open fire, on the outskirts of Mueda, in the northern Mozambican province of Cabo Delgado. Authorities organized nearly 60 trucks to drop hundreds of people in this area on 11 December. People had been stuck on the road for nearly two weeks in some cases while they were attempting to move further to Palma, a coastal town that was attacked earlier this year and where some people have already gradually returned. (December, 2021).

Over the past year, Mozambican armed forces and regional allies have increased their presence in a number of regions. The hotspots of the violence have shifted geographically, and people have begun to return to places that came under attack previously or were under the control of non-state armed groups.

The situation remains very fluid. MSF teams are distributing relief items in various locations where people are sheltering following recent attacks, such as Ntele, in Montepuez district, where more than 1,000 families arrived in late June. Most arrived with few or no possessions and experiencing great psychological distress. So far, MSF teams have distributed 701 kits containing essential relief items including tents, jerrycans, cooking pots and mosquito nets. MSF teams continue to provide assistance in areas with established MSF projects such as Macomia, Mueda and Palma. 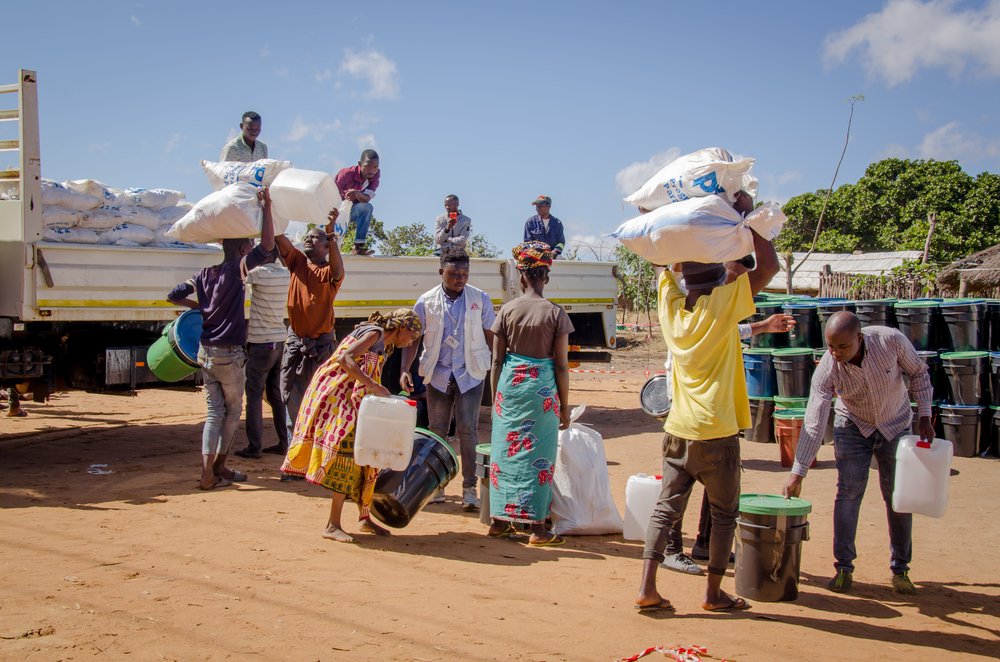 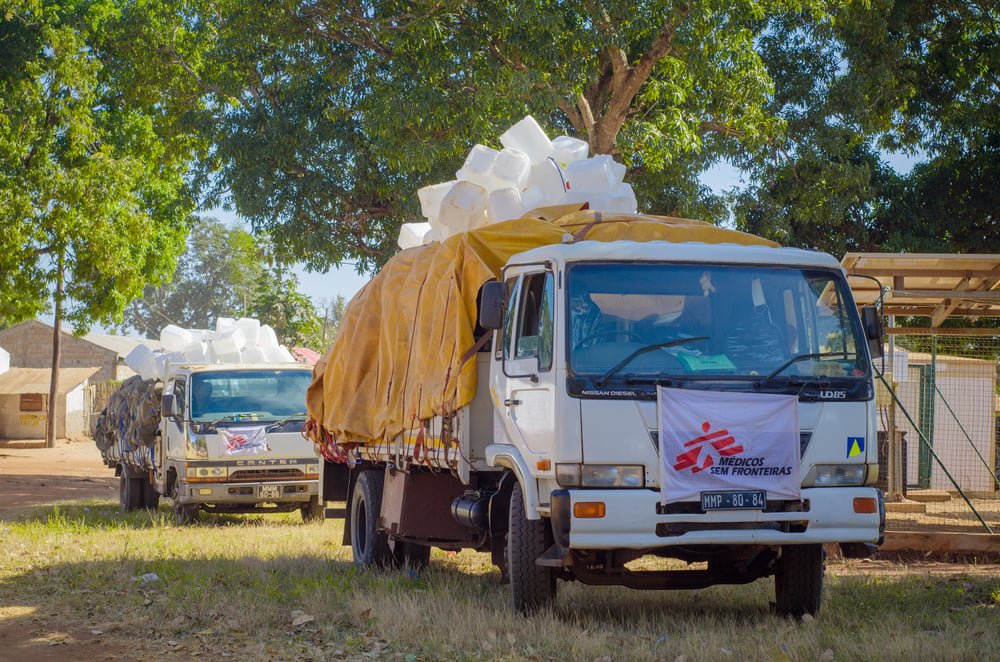 2. People’s humanitarian needs are enormous, but aid is in short supply

Some areas in Cabo Delgado province already hosted large numbers of displaced people and are now having to adapt to a fresh influx of arrivals. This has an impact on local communities. In most places, the humanitarian aid available is massively insufficient for people’s needs.

Overall, there are a large number of vulnerable people with substantial humanitarian needs, including healthcare, water and sanitation, and food. In some of the harder-to-reach areas, particularly in northern and central parts of the province, assistance is very limited. 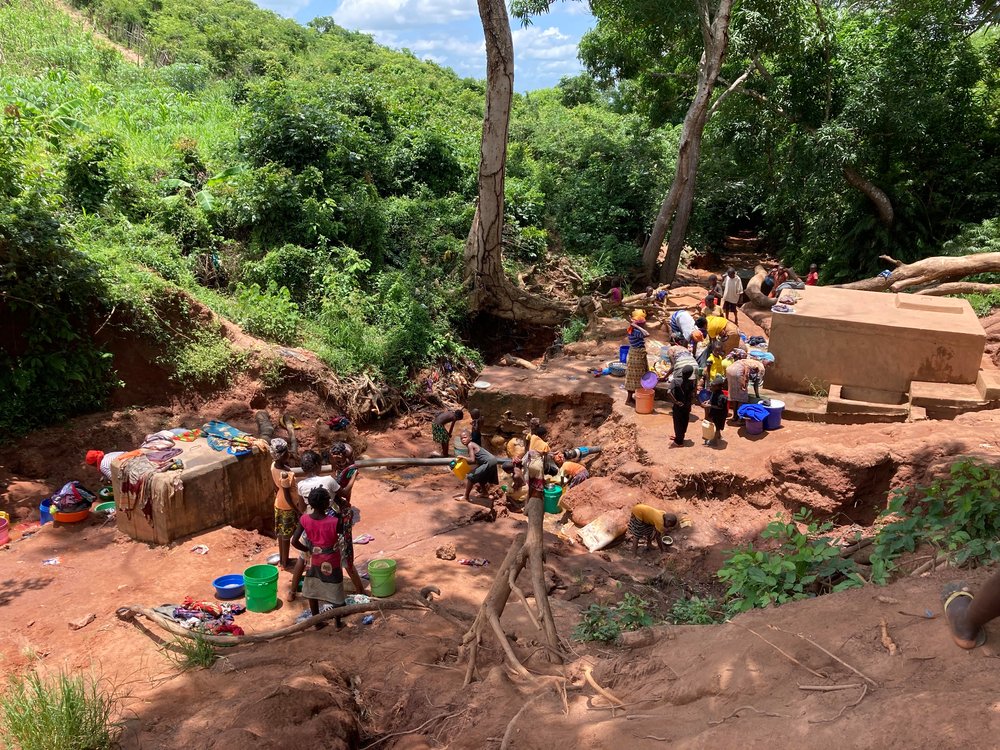 MSF
People draw water from a borehole built by MSF in Xinavane, Macomia district in Mozambique’s Cabo Delgado province. A large number of displaced people with substantial humanitarian needs are sheltering in the area. Healthcare and other essential services are extremely limited, and sometimes non-existent. (May, 2022). 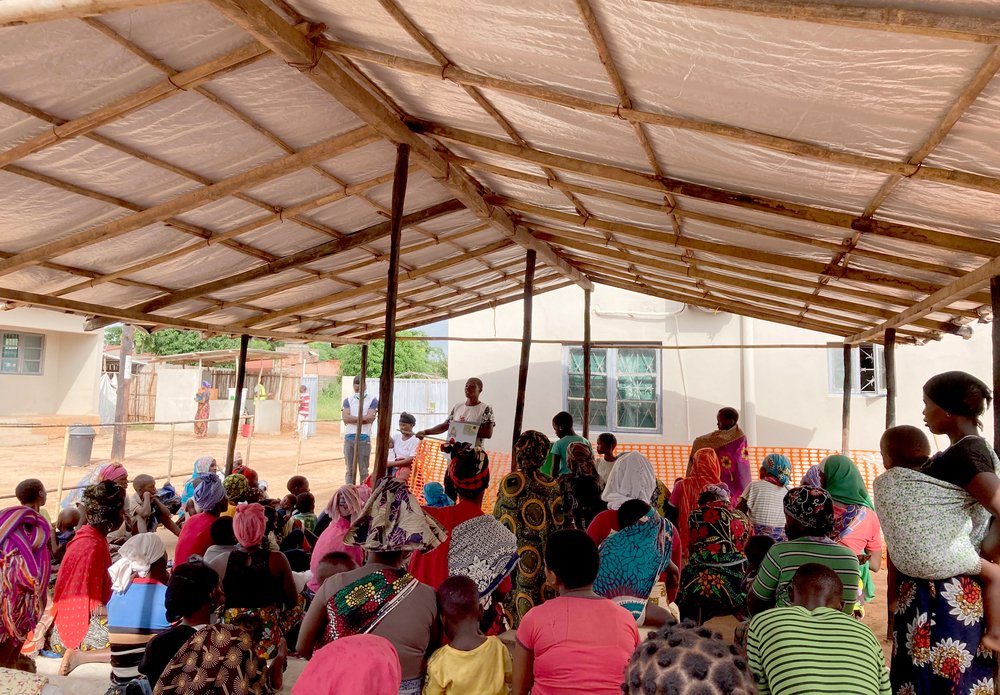 MSF
MSF health promoters talk to people at MSF’s clinic in Nanga, Macomia district in Mozambique’s Cabo Delgado province. (March, 2022). A large number of displaced people with substantial humanitarian needs are sheltering in the area. Healthcare and other essential services are extremely limited, and sometimes non-existent.

MSF teams are working in districts where people have had their lives overturned by fear of attacks, counter-attacks and unpredictable eruptions of violence. In some cases MSF is the only international humanitarian organisation working there on a permanent basis, despite the clear need for much more aid.

Many people avoid the towns at night because they feel they will be safer out in the fields and the bush. But here they face other dangers, such as malaria, which is a big problem. In Macomia, for example, four out of every ten adults coming to our clinics in May, and eight out of every ten children, tested positive for this deadly disease.

Across the province, specialist care for chronic medical conditions, such as HIV, is often unavailable, despite the prevalence of such diseases in the area. In Mueda, a hill town in the north of Cabo Delgado province, where MSF teams work in the local hospital and run mobile clinics, we have seen the condition of many patients worsen after their treatment was interrupted. 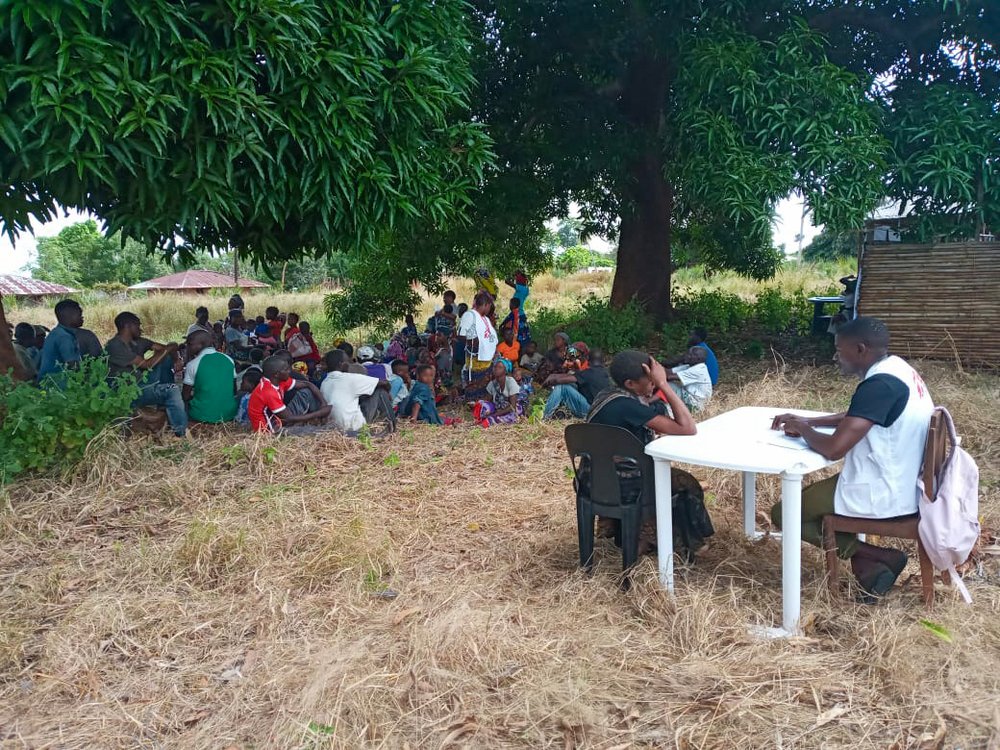 3. The crisis is taking a heavy toll on people’s mental health

The crisis in Cabo Delgado is far from over. With the violence continuing unabated, hundreds of thousands of people are suffering from the effects of fear, violence and displacement – both in terms of their physical and their mental health. Almost everyone in the region has experienced trauma of some kind during this conflict, as a result of witnessing or experiencing violence or losing their loved ones or their homes.

As long as we can ensure that our teams are safe, we will continue to strive to reach the most vulnerable people in Cabo Delgado province, wherever they are. With such huge humanitarian needs, it is critical that people can access assistance. 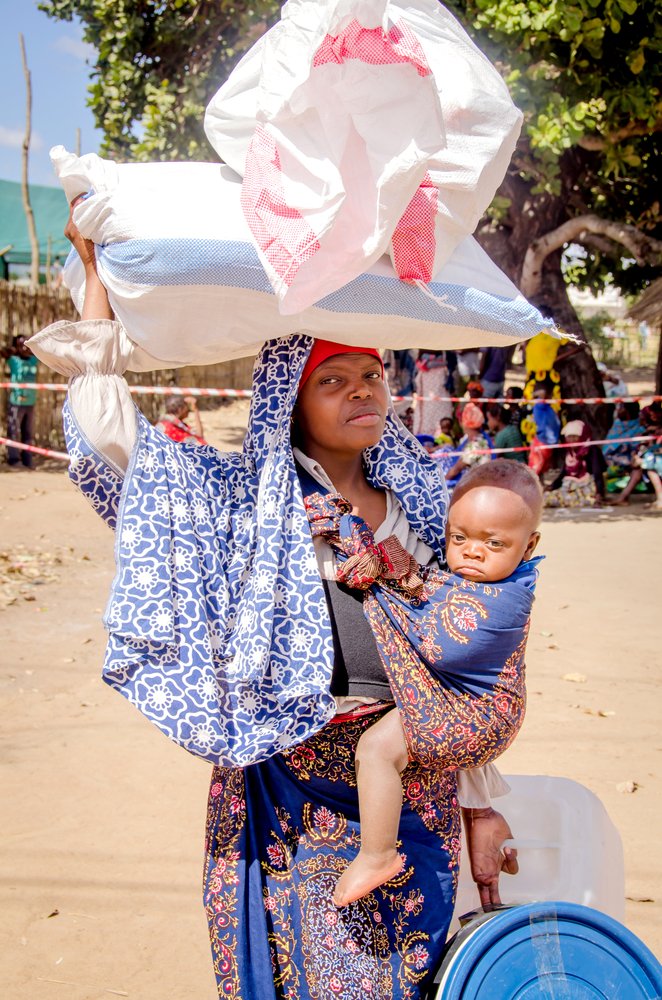 MSF
Saquina Ibrahimo, who was recently displaced from her home, carries a kit containing essential relief items provided by MSF in Ntele, in Montepuez district in Mozambique’s Cabo Delgado province. With violence continuing unabated, hundreds of thousands of people are seeing their physical and mental health deteriorate. (June, 2022). 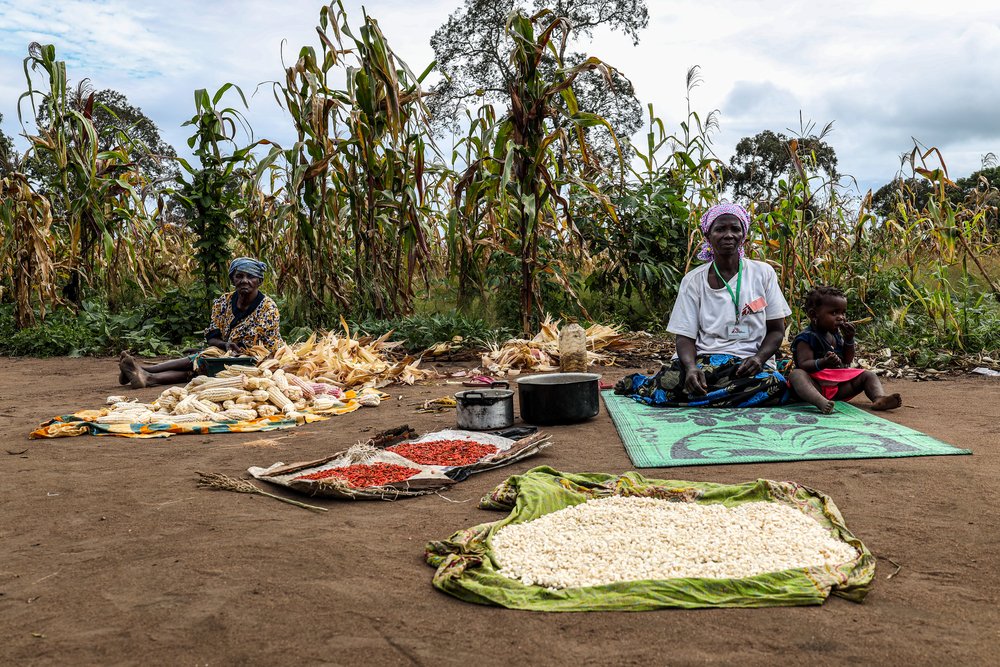 Mariana Abdalla/MSF
Atija Bacar sits with her elder mother and grandchild near the tent where she resides in Eduardo Mondlane camp, Mueda. She is 66 years old and originally from Mocímboa da Praia, a town heavily hit by attacks due to the ongoing conflict in the northern province. She now works with MSF as a traditional birth attendant (TBA) and assists more than 100 women in the camp. Like many of them, she lived through traumatic experiences, witnessing her husband’s and son’s murder. Now, she says she loves doing her job since she can help women in their time of need – “When I arrived here, this place was a forest. Some good people helped me to get settled. Now I can also help pregnant women. I know they need my support.” (May, 2022).