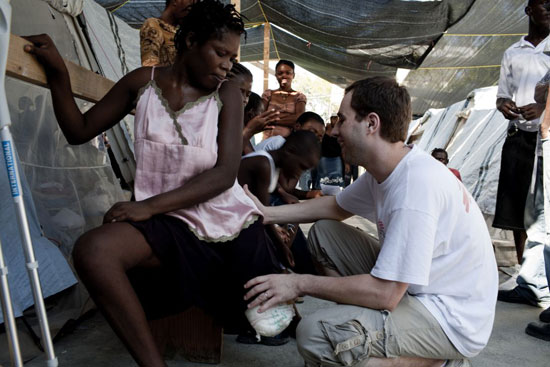 MSF in Haiti: Three months after the quake

Three months after the earthquake which devastated Haiti on January 12, killing over 200,000 people, MSF is continuing to respond to both the immediate and the longer-term needs of the Haitian people. Despite recent improvements in Haiti’s healthcare sector, medical services were limited and inequitably provided even before the January 12 earthquake, with Haiti having the highest maternal mortality rate in the western hemisphere.

At the start of 2010, MSF was operating four health facilities in Port-au-Prince, providing, among other things, primary and secondary care, trauma and emergency treatment, and surgical and obstetric services. When the earthquake struck, MSF rushed to respond to overwhelming medical needs and the number rose to 26, including hospitals, post-operative care facilities, rehabilitation centres, and general medical centres.

Following the consolidation of some facilities and a shift in priorities, MSF now manages 19 health facilities along with 3 mobile clinics, with a staff of more than 3,200. Overall, since the earthquake, MSF has provided medical care to more than 92,000 patients and performed nearly 5,000 surgeries.

Extraordinary generosity
In a remarkable display of public support, MSF offices worldwide received private donations amounting to more than €87 million to support the victims of the earthquake in Haiti. These funds have allowed our teams to reach the most affected people and help them recover from the devastation. As of 1st April, MSF had spent or committed to spend approximately €40 million its work in Haiti and estimates that it will spend approximately €70 million in 2010.

Evolving Needs
MSF’s work in Haiti has evolved from dealing with emergency interventions and lifesaving surgeries to retrofitting new facilities and widening the scope of services offered, to longer-term post-operative care, psychological care and physiotherapy.

Among the survivors are a great many people who suffered serious and complex injuries that necessitated emergency medical intervention at the time but also require long-term follow-up care. These patients, as well as other vulnerable patients, especially pregnant women and children, must have access to quality healthcare.

MSF’s current activities
MSF manages 19 health structures and 3 mobile clinics in Haiti, including 16 operating theatres as well as a full range of post-operative care at every MSF-supported structure. Some of the major facilities include:

In Port-au-Prince, the Saint-Louis inflatable hospital provides 220 beds, three operating theatres and caters to paediatric, maternity and post-operative needs. MSF is also supporting the Ministry of Health at the Isaie Jeanty Emergency Obstetrics Hospital and the Choscal Hospital in Cité Soleil, one of the poorest parts of Port-au-Prince.

Léogâne, outside Port-au-Prince, was one of the worst hit areas in Haiti. MSF has been working in Léogâne since soon after the earthquake and is now shifting from tents to more durable structures. Also outside Port-au-Prince, MSF is performing around 40 surgical interventions every day at the Carrefour Arts et Métiers Hospital, and is providing full outpatient and inpatient services in Jacmel.

A team of MSF psychologists is focusing on the patients and staff at the Sarthe, Choscal and Martissant facilities and these activities have also shifted towards providing counselling to displaced people living in makeshift camps around the structures, as well as to victims of sexual violence.

In addition to distributing non-food items (NFI), including basic necessities and hygiene kits, MSF has been working with other organisations working in the water and sanitation sectors in several locations both inside and outside of Port-au-Prince. All told, MSF has been distributing 870 cubic meters of water per day and has built 450 latrines and 101 showers in areas where tens of thousands of people are living. MSF is now starting to hand over some water-and-sanitation activities to other organisations.