Birgitta Gleeson had just returned to Ireland after a year as an MSF lab manager in Uzbekistan when she saw another vacancy for the same role with MSF – this time in Dublin.

It was mid-March, and the COVID-19 pandemic that was already devastating healthcare systems across Europe had arrived in Ireland. A Government lockdown saw schools, shops, and offices close, and an official ‘stay home’ policy in place.

For Ireland’s marginalised groups, such as the homeless, migrants, protection applicants in Direct Provision, and Traveller communities, the potential impact of COVID-19 was particularly concerning. Many are stuck in substandard, overcrowded living conditions, or excluded from established healthcare systems. Experiences in other countries had already shown that the virus can spread rapidly if left undetected in such congregated settings. 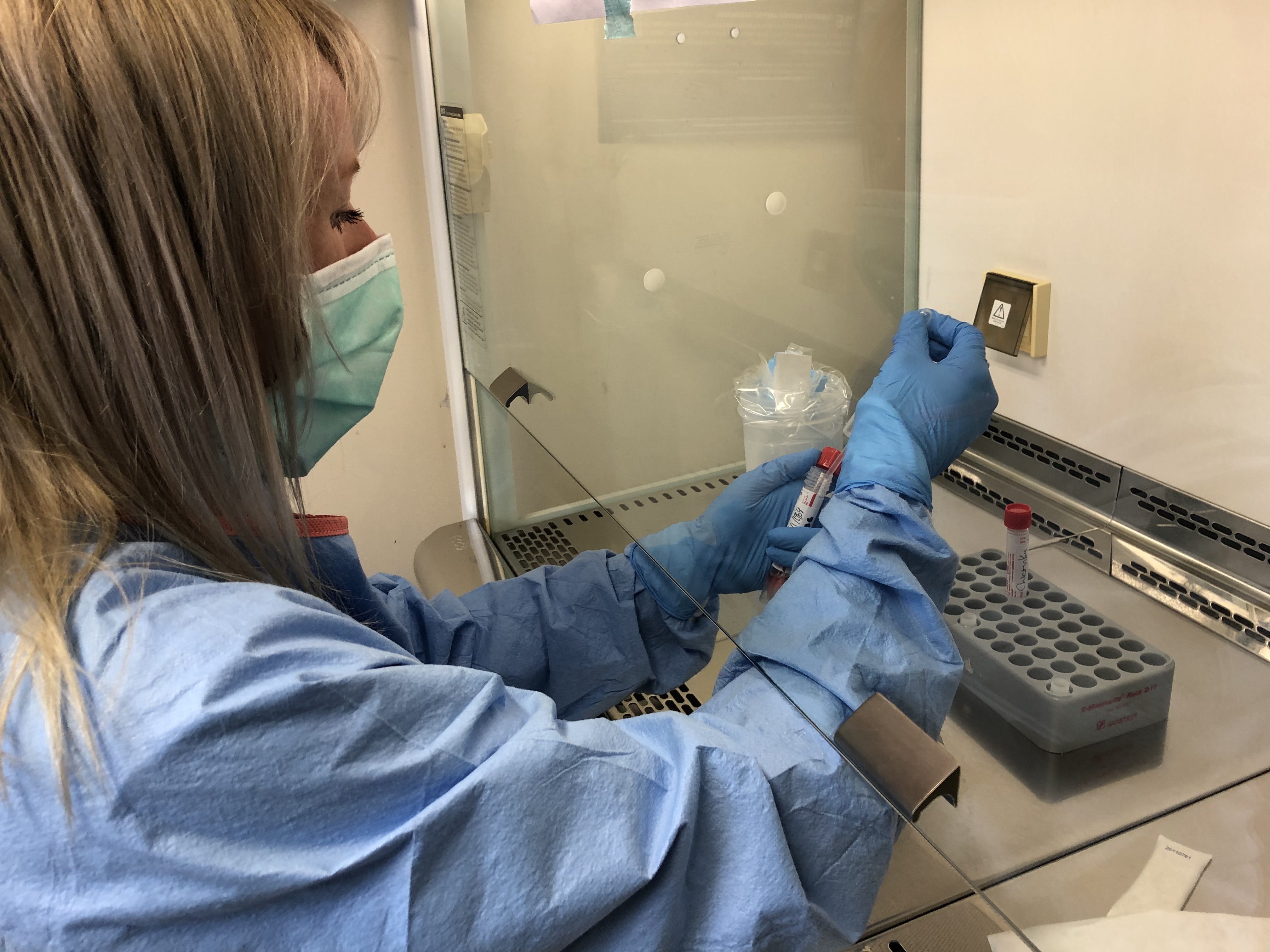 MSF Laboratory Manager Birgitta Gleeson tests swabs for COVID-19 at the Catherine McAuley Centre laboratory in Dublin, May 2020. Since March, Birgitta has been responsible for COVID-19 testing as part of MSF’s collaboration with Safetynet Primary Care to provide testing, triage and care for marginalised groups in Dublin during the pandemic. Credit: MSF Ireland

As part of a broad civil response to the pandemic, MSF Ireland put out a call for field staff to join a mission in Ireland for the first time since opening an office here in 2006. MSF partnered with Safetynet Primary Care – an Irish medical charity that delivers quality care to those marginalized in society without access to healthcare, including homeless people, drug users, and migrants - to place Birgitta and two staff nurses on their COVID-19 response team in Dublin. Safetynet adapted its regular activities to identify, triage test, and treat homeless and other vulnerable people for COVID-19, and opened a community assessment hub for vulnerable people in the inner city.

“There is no treatment or vaccine yet for COVID-19, so being able to test and identify people who may be infectious is the most important thing we can do to combat the spread of the virus. It’s said that without diagnostics, medicine is blind, and that really is the case here”

Testing COVID-19 samples as part of the operation, Birgitta’s expertise in diagnostics played a key role in allowing Safetynet to quickly identify and isolate people who had contracted the virus, breaking the chain of transmission within vulnerable communities. Between mid-March and the end of May, the Safetynet team tested over 900 vulnerable people living in congregated settings for COVID-19, with an incidence of positive cases of 11%, which compares to 4% in the wider community.

“There is no treatment or vaccine yet for COVID-19, so being able to test and identify people who may be infectious is the most important thing we can do to combat the spread of the virus. It’s said that without diagnostics, medicine is blind, and that really is the case here,” explained Birgitta.

While Safetynet medical staff arranged testing and isolation at potential cluster sites, Birgitta used an emergency testing technology called GeneXpert, which she had worked with in Uzbekistan, to identify positive COVID-19 cases within an hour of testing.

“The process is simple. For instance, if there is a homeless person in a shelter showing symptoms, the team go in and swab everybody that that person has been in contact with. A nurse takes a swab from the back of the patient’s nose, which is then transported to the lab. I transfer the sample from the tube into a self-contained cartridge for testing. The cartridge carries out a technique called PCR (Polymerase Chain Reaction), which looks for the DNA of the virus. Within 45 minutes, we can get a result. I can then relate back to the nurse if the patient is COVID-19 positive, and that patient can be isolated within the hour if positive. Since the beginning of this pandemic, the WHO have been saying ‘test, test, test’, and that’s exactly what we’ve done on this project,” said Birgitta.

As well as allowing medical staff to identify positive cases quickly, rapid testing means that suspected cases do not have to go into hospital or isolate for long periods unnecessarily.

The benefits of such rapid testing among at-risk groups were made clear during an outbreak at a Traveller halting site in Dublin that the team worked on. The day after a family with positive symptoms were identified and isolated by Safetynet staff, Birgitta joined the team to help test the other 100 people also living at the halting site for COVID-19, ensuring that further spread of the virus within the community was impeded.

“Birgitta came in hitting the ground running in true MSF style,” said Dr. Fiona O’Reilly, Safetynet Primary Care’s CEO. “She set up our mobile lab capacity ensuring quality and safety standards were met while flexibility adapting to the needs. Safetynet’s ability to turnaround tests within an hour for vulnerable people in congregated settings became the backbone of our response and helped stem the spread of the virus and ultimately save lives.”

The work of humanitarian scientists

Birgitta, who is from Athlone and holds a Ph.D. in Medicine from UCC, had long wanted to get involved with MSF before her first field mission to Nukus, western Uzbekistan, last year.

“I had been following MSF for years, and always wanted to use my skills to be able to help in some ways. For years, I thought the only way you could do that was by becoming a doctor, but that’s not the case. I made the decision to use my skills as a scientist to help people in the same way that a doctor would use their skills; as a humanitarian scientist. Science and diagnostics are often overlooked; people sometimes don’t understand its importance until something like this pandemic happens,” explained Birgitta.

In Uzbekistan, Birgitta worked on MSF’s multidrug-resistant TB (MDR-TB) project. The country has one of the highest rates of the disease in the world, and MSF has been active in testing and treating TB patients there since 1997.

“For TB, you need diagnostics at every stage, not just to recognise that a patient has it, but also to monitor their treatment. We were getting about 2,000 samples to test for TB every month in the lab in Nukus, and then monitoring patients throughout.”

Birgitta says a strong background in diagnostics is an important skill for humanitarian scientists. Apart from that, flexibility and commitment to replicate high lab standards are critical. “You have to be able to keep the standards and quality that you would have in a hospital lab. You’re not always going to have everything to hand, but you use what you have.”

Birgitta can now say she played a role in MSF’s first-ever operation in Ireland. 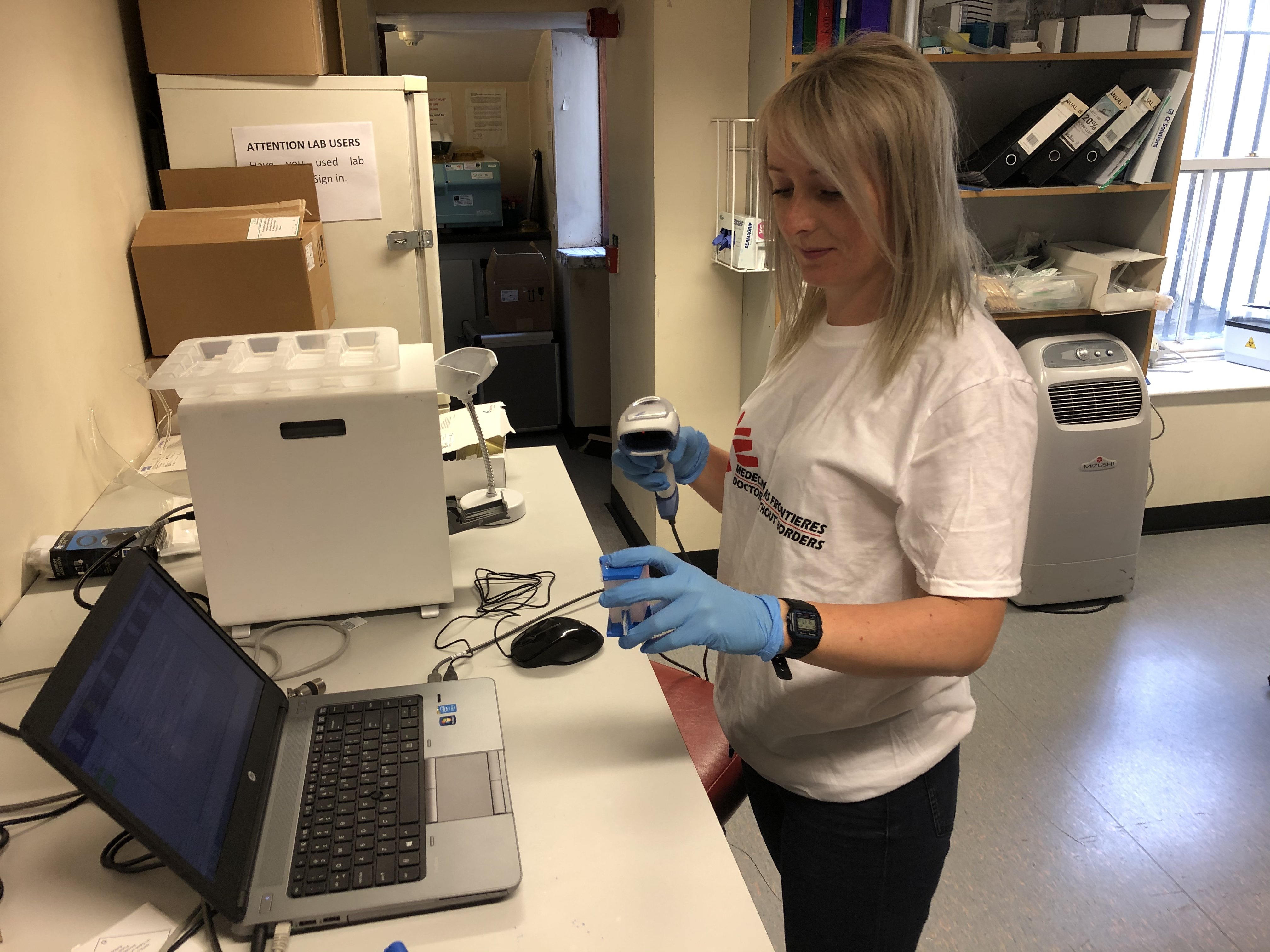 “This was a really nice collaboration between MSF and Safetynet, and I really enjoyed working on it. Safetynet are a great charity and reminds me of a lot of MSF, how they can reorient themselves so quickly when needed.

“I never expected to be working on an MSF mission in my home country, but I’m delighted I was able to get involved and to be able to help out when I was needed.”

The Safetynet team continues their response to COVID-19 among Dublin's vulnerable communities.

“This first Safetynet/MSF collaboration worked really due to our shared ethos and approach. We wish Birgitta the very best for her next mission” said Safetynet's Dr. Fiona O’Reilly.

our response to COVID-19 pandemic >