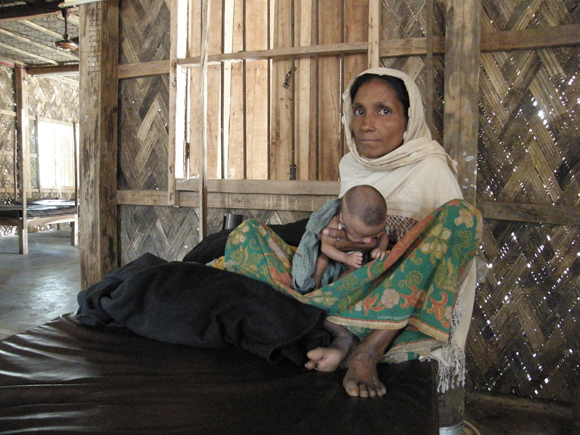 Khatiza was being treated for malnutrition along with her youngest child at the inpatient department in Kutupalong. Both were making good progress, but Khatiza also suffered from tuberculosis or TB, for which she received treatment from a local development organisation.

Her twins, aged two-and-a-half, were being treated at a feeding centre in Kutupalong for malnutrition, while her 10-year-old daughter and two sons (aged six and nine) stayed with friends in the refugee camp. Neither husband provided the children with enough support and, while her oldest son was a registered refugee, Khatiza and the rest of her children were not, making them ineligible for UNHCR or World Food Programme aid.

Without help from MSF and other organisations, Khatiza had little way of obtaining enough money or food to prevent her children falling ill in the future. Also, if she had had to fend for herself, it is unlikely she would be able to continue or finish her course of treatment and would risk developing a drug-resistant strain of the disease, making her a danger to her family and other those she came into contact with.

When the first wave of Rohingya fled to Bangladesh in the early 1990s, they were registered as refugees and therefore eligible to shelter and non-food items from the UNHCR and food rations from the World Food Programme. However, those arriving after 1996 were deemed to be ‘economic migrants’ and were therefore ineligible for such assistance. Dr Stille describes this lack of assistance as a ‘recurring theme’ among the patients he treated - Khatiza and her children are just one such example.

Khatiza first came to Bangladesh in the early nineties, but was repatriated back to Myanmar (Burma). She fled back to Cox’s Bazaar after her husband was accused of being part of a resistance group. He had left Khatiza, but because they were still officially married, the border guards ordered her to pay compensation if she did not hand him in to the authorities. Her second husband had also left her and was in the process of divorcing her.

Abdullah was 16 years old. He was brought to the MSF inpatient department in Nayapara with a spinal injury. He had no motor function in his legs and had sustained bed sores in the previous hospital he was in. His mother had run out of money to pay for his treatment. Read the full story.

Kulsuma was a 20-year-old mother of two. She was admitted to the inpatient department in Nayapara after suffering acute heart failure. Without surgery and specialist care, Kulsuma’s life expectancy was a few years at best. Read the full story.