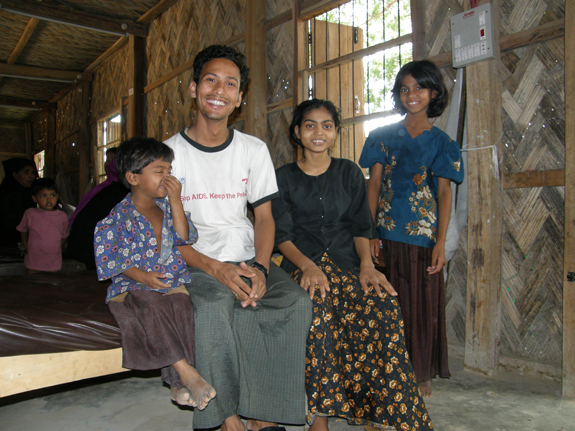 Kulsuma is a 20-year-old mother of two living in Nayapara. As registered refugees with the UNHCR but not the Government of Bangladesh, Kulsuma and her husband Hassan were able to receive shelter and non-food items, but not food distribution, despite having lived there since the 1990s.

Kulsuma had been admitted twice to the inpatient department in Nayapara after suffering acute heart failure. She was kept in for observation and to make sure she was eating well. Her condition remained stable for the following months and she was able to walk short distances, but without heart surgery and specialist care, Kulsuma’s life expectancy was a few years at best.

After discussion with the medical coordinator of the UNHCR, Dr Stille had Kulsuma (and her family) put on the emergency expatriation list on medical grounds. New Zealand was thankfully willing to receive them, facilitate the necessary heart surgery for Kulsuma and offer her and her family asylum. Having heard the wonderful news, Kulsuma received stabilisation treatment in Dhaka and a specialist doctor deemed her fit to fly.

The family were due to be transferred to New Zealand in July 2008. There, her husband Hassan will be able to put the English he taught himself in the refugee camp to good use.

Abdullah was 16 years old. He was brought to the MSF inpatient department in Nayapara with a spinal injury. He had no motor function in his legs and had sustained bed sores in the previous hospital he was in. His mother had run out of money to pay for his treatment. Read the full story.