Niger, at the crossroads of migration

War. Civil unrest. Persecution. Extreme poverty. Seasonal trade. Human beings can be driven out of their homes for multiple reasons, but they usually have a common objective: to find a safe and dignified future.

Thousands of people on their journey transit through the region of Agadez, in central Niger, along the way: directly from their places of origin, expelled from Algeria, returning from Libya or moving internally within Niger.

Between January and October 2019, migration flows across Niger doubled compared to the same period last year: from an estimated 266,590 in 2018 to more than 540,000 this year (IOM). The number of people who died during those journeys remains unknown, however. Médecins Sans Frontières (MSF) has been running a project across key migration routes in the area since August 2018, providing medical and humanitarian assistance to women, men and children in need. This support includes providing basic relief items, general healthcare, psychosocial support, lifesaving evacuations, and search and rescue of migrants lost/abandoned in the desert.

“They[i] just picked me up in the street; I had only the clothes on my back. I spent five days in prison. They do not care; they do not want to know your condition. They put us in trucks carrying sand. We slept there. They threw food to us in the back, without knowing if there were babies in the truck or if there were pregnant women. And then they throw you out into the desert. You walk and walk, more than 20 kilometres. That's really not easy when you are seven months’ pregnant. I really went through hell.” That is how Sandrine[ii], a 32-year-old woman from Cameroon, described her expulsion from Algeria to Niger last July.

Her story is not unique. First-hand accounts gathered by MSF teams in the Agadez region confirm that refugees, asylum seekers and migrants continue to undergo terrible ordeals during their journeys, either those travelling north, or those expelled from Algeria, or people returned from Libya. People experience violence, neglect, abuse, exploitation – some die. Moreover, once in Niger, some find themselves with limited and often hazardous options to earn a living and continue their trip.

Expelled from Algeria, dropped in the middle of nowhere

An average of 500 people are being expelled from Algeria to Niger every week. Over 25,000[iii] people were sent from Algeria to Niger in 2018, including in official convoys and those deported. The trend is continuing, with more than 23,800 people expelled[iv] from January to October 2019; half of them, forcibly. People expelled can encounter the following conditions: 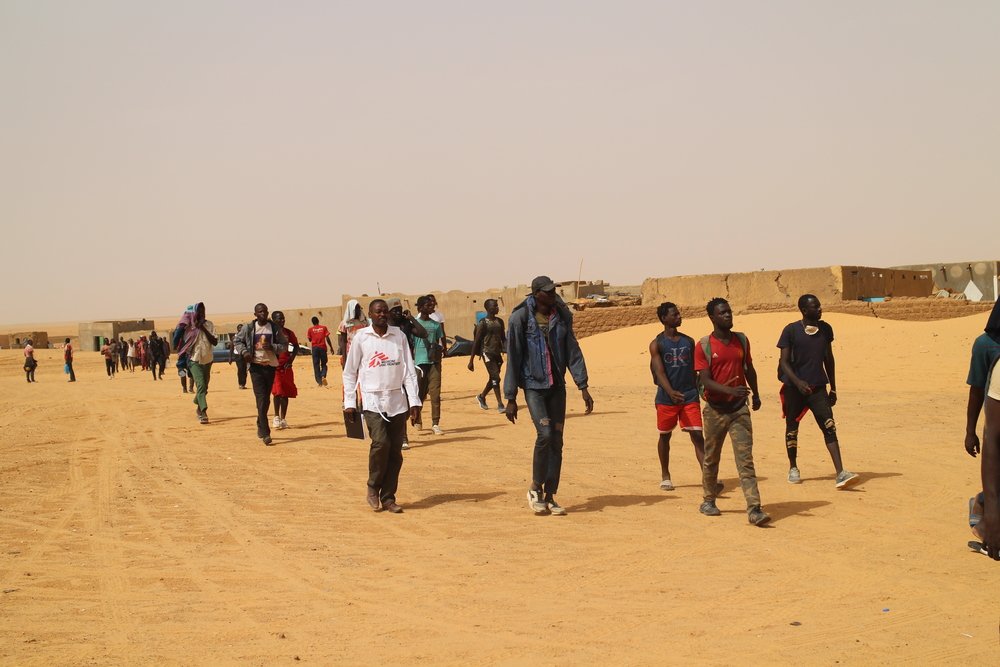 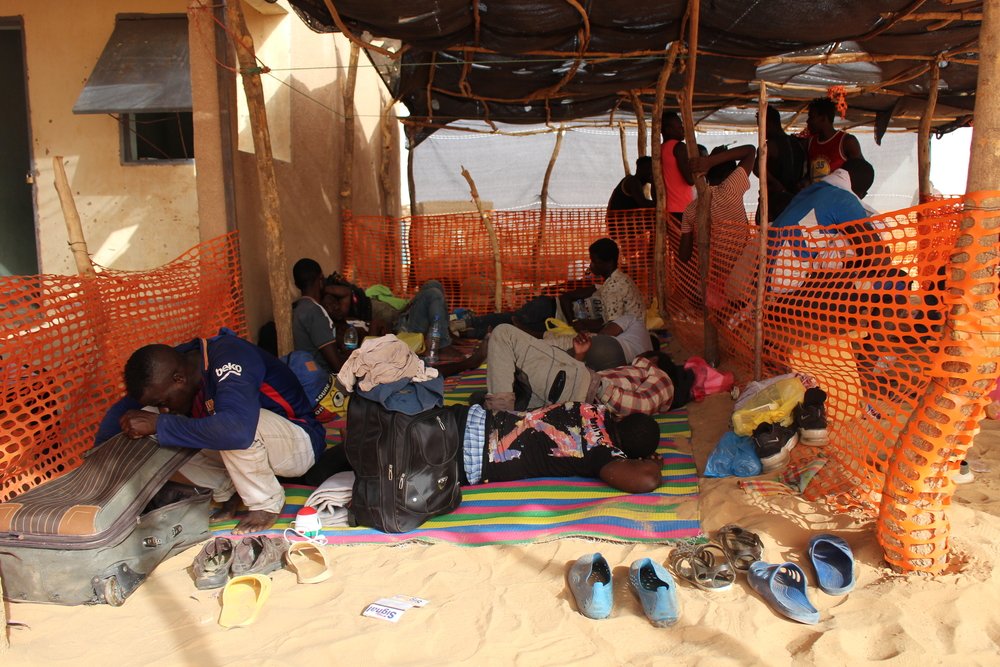 People in Libya live under conditions of war and the continuous threat of arbitrary detention, torture, rape, sexual exploitation and other human rights violations. Among those who are not in detention centres or are victims of human trafficking, many strive to leave the country. Some try to find their way out via the Mediterranean Sea, while others risk their lives going south into Niger. Our teams in the region of Agadez have encountered many of these survivors who were either stranded in the desert of the Ténéré region in northeastern Niger or were seeking healthcare in the medical facilities we are supporting. This was the case of the following women:

Mary[v], from Nigeria, had been offered the chance to go to Italy to work as a hairdresser. She had been trained as a hairdresser and “things were hard at home,” so she accepted. The smuggler never fulfilled his promise, though; instead, he held her and other women in Libya against their will and forced them to engage in sex work.

“The house they kept us in was like a cage. We would barely go outside.”

“When we were going to Libya, he was nice. But when we got there, things changed.”

“I began to see they would take innocent boys, and then tell them to call their parents in Nigeria to ask them to send money. They would beat them for that.”

“You don’t even know where the taxi is taking you. They would just take you to one strange house to go and see one strange man. The next thing you see is your boss who will make a call and the man who will give you the food. Your boss would tell you ‘I want you to sleep with that man, and I want you to collect plenty of money from that man. If you come back here tomorrow morning and that man is complaining that you didn’t work well, I’m going to kill you’”.

Similarly, Rose[vi] was brought to Libya and exploited while believing she was going somewhere else. She says she was kept in a building with about 30 other girls, some of them “very, very young”, all of them reportedly subjected to abuse and exploitation by human traffickers.

“I went to hell inside that house. If I didn’t have sex, they would beat me to death. One day he beat me so hard; my hand was swollen and broken. I would just sit on my own, crying.”

“For a good two years, I stayed inside that room, until I finished paying their money. You were not going out at all. The taxis outside are waiting for you. The taxi will drive straight to where you are going. When you reach [the place], the taxi will drive away. But in the early morning, the taxi is there waiting for you and immediately you enter inside the person’s house you are going to. They have already given him instructions. Maybe that person wants to go outside to buy something, maybe to buy water, they will lock that door. They will lock everywhere inside that house. There is no movement”.

Rose says that if someone was sick, they would have to pay 80 dinars (about €50) for healthcare. Hygiene in these places is also very poor.

Rose and Mary are currently in Niger. They stated they had managed to escape from their captors through men who helped pay for their ‘freedom’, and then moved to Niger through smugglers. Our teams met them in a health facility where they sought medical assistance. MSF linked them up with specialised protection agencies, as their past experience and restricted means to cover their vital needs exacerbate their vulnerabilities and risk their safety.

We have been helping people on the move and vulnerable host communities in Agadez region since August 2018. We do so through three different strategies: by providing healthcare in existing medical facilities in Arlit, Tabelot, Séguédine and Aney, where up to 41% of those benefitting from our services in October were people on the move; through mobile clinics in transit locations such as Dirkou, Fasso, Amzigan, Lataye, Guidan Daka, Kori Kantana and La Dune, where most of the patients are migrants, refugees or asylum seekers; and in ‘ghettos’ or ‘maisons closes’ [where people engage in sex work] in Dirkou. In addition, our teams identify and refer those in need to be assisted by organizations specialized in protection concerns.

Basic relief aid in Assamaka. From January to October 2019, our teams distributed water, high-energy biscuits and essential items such as hygiene kits, underwear, blankets and clothes to nearly 7,000 people expelled from Algeria. We also offer all new arrivals we see quick medical check-ups to identify and refer people that need immediate healthcare and/or mental health support. This assistance is available for vulnerable people among host communities as well. Moreover, we have built showers and latrines in the area.

Treating the injured and sick, and assisting traumatised people. Between January and October 2019, we carried out more than 30,400 general consultations, with medical evacuations to hospitals and clinics for people requiring immediate advanced treatment. In addition, our mental health teams provided 713 consultations with people diagnosed with anxiety, depression and post-traumatic stress disorder. Arbitrary detention, torture and rape were among the human rights violations people on the move reported having suffered before being expelled to Niger. Confiscation of property and family separation were the other main issues of concern among our patients.

Maternal healthcare and deliveries. We provided antenatal services to 2,317 women from January to October 2019, and assisted in the birth of 362 babies. 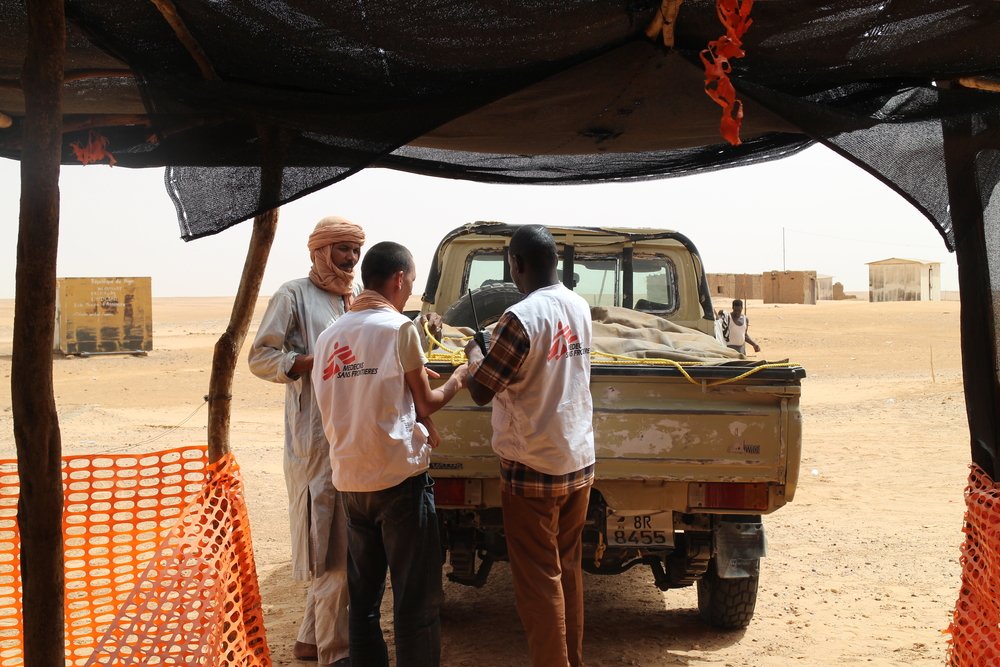 Search and rescue in the desert

People continue to attempt to cross the Ténéré desert’s sand dunes despite harsh weather conditions, perilous routes and their limited means, making them extremely vulnerable. Some people don’t make it. Piles of stones in the sand often mark the tomb of those who have died, buried by the survivors.

Nobody should have to risk their lives in the Ténéré. The criminalisation of migration pushes hundreds of people into crossing dangerous routes across the endless dunes of the Nigerien desert, causing an untold number of deaths and suffering. Migrants, refugees and asylum seekers usually travel in vehicles with a capacity of about 25 to 30 people, who are sometimes also forced to walk very long distances.

Adults can barely survive for over three days without water, especially under extreme heat; children, even less. As a result, those who get stranded can quickly die of dehydration. Back in October 2013, a group of rescuers found the bodies of 92 people near Arlit, mostly women and children. Fast forward to 2019, and such unfortunate incidents continue to happen often in the Ténéré, along the routes towards or from Libya, but also in the border with Algeria: in November, an expelled Malian who didn’t find the right way from the Zero Point to Assamaka passed away just a few kilometres away from it. People on the move usually carry water reserves, but they can be insufficient if they get lost or abandoned.

To prevent avoidable deaths of migrants who get stranded because their vehicle broke down, had an accident or was abandoned by the smugglers, MSF has recently started to facilitate search and rescue activities in the desert supporting teams composed by staff from of the Ministry of Public Health, desert guides and members of the local community. Since July 2019, this strategy has enabled the rescue of over 40 people, and we have provided urgent assistance to 30 more. About half of the rescued or assisted people were Nigeriens migrants, while the others were Nigerians and Chadians. These men and women had been either victims of a car crash or stranded due vehicle mechanical problems. Most of them were suffering from extreme dehydration because of high temperatures and a lack of water points around them.

Migration is not a crime, but it is being increasingly criminalised worldwide – and dehumanised.

Policies designed and implemented by both European and non-European governments dehumanise migration. They ultimately do not deter people from seeking safety or a better life; neither do walls or fences. Instead, these frameworks leave people at further risk of human rights violations and danger to their lives. Newly enforced laws just translate into people taking more desperate measures to leave, which can mean attempting to cross an open rough sea in an overloaded dinghy or cross a desert with limited and inadequate means for such dangerous journeys.

Furthermore, these policies are leading to increased arbitrary detention of people including minors. They result in the separation of families and leave thousands of men, women and children with no adequate resources to move on, insufficient access to basic social services – including healthcare and the treatment of deadly diseases such as TB and HIV – and hard choices to make in order to have a safer, better life. It is critical to start reversing such harmful policies, and to guarantee unconditional humanitarian assistance and protection for people on the move, ensuring that local structures in transit countries like Niger can meet the needs of all: vulnerable local communities, migrants, refugees and asylum-seekers. 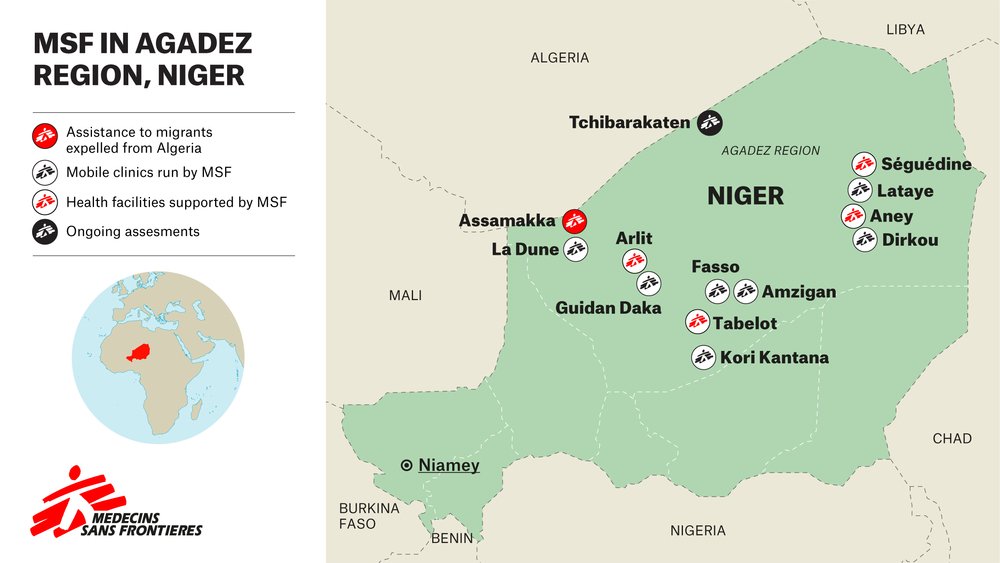 [i]The woman’s name has been change

[iv]Sources: MSF, for the deported; International Organization for Migration (IOM), for official convoys

[v]The woman’s name has been change

[vi]The woman’s name has been change