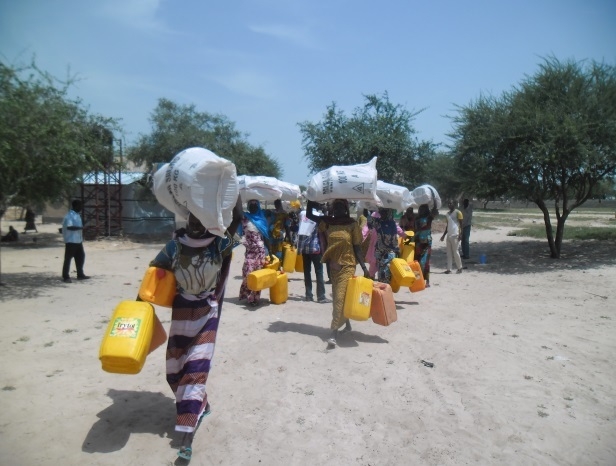 Over the last few days, more than 200 families from Nigeria and Chad have reached the town of Toumour, located in east Diffa region, fleeing violence and hunger in their hometowns.

Most of the new arrivals are women and children and, according to their testimonies, they walked for 4 or 5 days, though only at night, for fear of being attacked by Boko Haram or detained by the army.

Many of the new arrivals were hosted by the local population, many of them displaced persons and refugees themselves, and who continue to show great solidarity with the new waves of displacement and share the limited resources they have.

Despite this support, 77 of the families newly arrived in Toumour were living in very poor conditions, without enough food and without any basic materials. To alleviate this situation, an MSF team has distributed NFI kits –with domestic items, blankets, mosquito nets and hygienic kits– to these 77 families.

MSF
Conflict and instability in the region means that many families have been forced to leave their home in search of the most basic needs to survive like food, water and shelter

Djoumai Tchaiman, 28 years old, was one of the refugees who received the aid kit. “I come from Lake Chad, on the border between Nigeria, Chad and Niger.

We had been wanting to leave there for a long time due to the insecurity but we couldn’t because we didn’t know where Boko Haram might be.

We took the opportunity to flee when there were problems between them and they were going to fight near our village. It was 8 pm. After four days walking, we arrived in Toumour – me, my five children, my husband and my parents-in-law.

With the arrival of the new refugees, there have been many medical consultations linked to fatigue and stress at the health centre in Toumour (supported regularly by MSF) due to the long days of walking and the fear of being attacked or arrested.

MSF has also strengthened the nutritional supplementation for the newly displaced children under 5 years old and their families.

MSF
77 of the families newly arrived in Toumour lived in very poor conditions, without enough food, water or medical care. To alleviate this situation, an MSF team has distributed NFI kits for these 77 families

In addition to these 200 families, small groups of refugees continue to arrive inToumour.

Although many aid organisations left the area after the attacks that took place last June in the district of Bosso, where Toumour is located, the town still has several services in place: water points and a health centre where medical attention is free for the entire population.

For new arrivals, the main problem is access to food; although there are basic foods in the market, the displaced people have no money to buy them.

“Given the critical situation in the areas of Nigeria and Chad bordering with Niger, it is likely that Toumour will continue to receive more refugees and in such a precarious condition as this last group,” explains Youssouf Demdelé, MSF’s deputy head of mission in Niger.

“The population has not been able to grow their own food and is dependent on food distributions. In addition, we are in the middle of the malaria season. There are several humanitarian agencies working in Diffa but there are still areas where more help is needed.”

As the MSF team distributes the NFI kits, they are approached by a neighbour of Djoumai Tchaiman.

"It's a very human gesture what you are doing, even though we do not benefit because we were displaced earlier. It's fair. The whole neighbourhood is aware of Djoumai and her children’s situation,” she says.

Find out more about MSF's work in Nigeria