“We decided to leave our village after 56 people were killed by bandits in one day,” says Fatima Y. Sitting on a yellow chair in the shade and wearing an orange veil, Fatima’s agitation is obvious. “About 30 people from our village had already been killed and our belongings were constantly being looted.”

Fatima is now staying in a camp in Anka, in northwest Nigeria’s Zamfara state, after her home village of Jar’kuka became too dangerous to live in.

“We would like to go back and rebuild our houses and start a new life.”

Abbas, also staying in the camp known as ‘New Emir’s Palace’ in Anka, left his village of Tangaram with his wife and three children after his father was abducted. 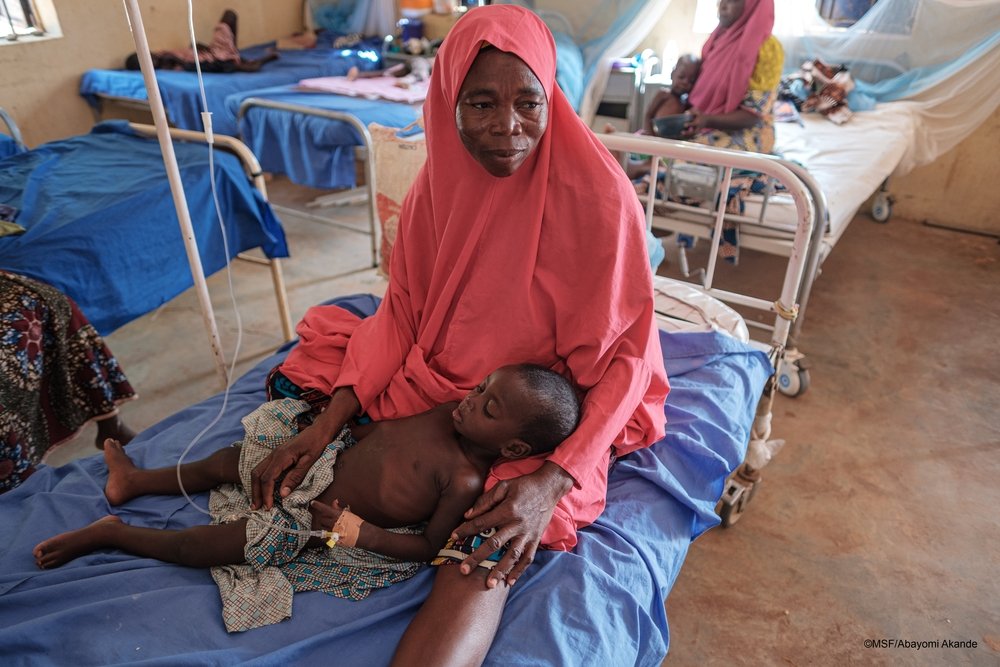 MSF/Abayomi Akande
Salamatu A. with her 2 year-old so, who has malaria, in the paediatric ward of Shinkafi hospital, Zamfara state, northwest Nigeria.

“One was killed and the other was abducted”

“Two years ago, my father, who was the traditional leader of our village, was abducted by bandits and taken to the bush,” he says. “The bandits demanded a ransom, which was paid. Since then, we haven’t tried to return. Two people went back to check on the situation there but one was killed and the other was abducted, although later he escaped.”

Fatima and Abbas are just two of around 200,000 people who have been displaced within the northwest of Nigeria state since 2011, according to the International Crisis Group. This includes around 100,000 people who sought safety in the towns of Anka, Shinkafi and Zurmi, in the Zamfara state, following an upsurge in violence in 2018.

Anka camp is the only site for IDPs in Zamfara. In the northwest, IDPs are usually present in every town of the state and hosted in different cities, which makes, among other things, more complicated the availability of reliable figures. While in the northeast, in Borno State, the IDPs are mostly concentrated in garrison towns.

For people across Zamfara and neighbouring states in northwest Nigeria, the insecurity has disrupted everyday activities such as earning one’s living and growing food and prevented people from accessing essential services such as healthcare. What began as localised disputes between herders and farmers over access to land have metamorphosised gradually into a major conflict.

“Our biggest problem here is food”

Most people fled their homes in response to extreme violence, including abductions and mass killings, like those reported by Fatima and Abbas. Currently, the majority receive almost no organised assistance. In Anka and in other places where displaced are present, people are in desperate need of essentials such as shelter, clean drinking water and enough to eat. 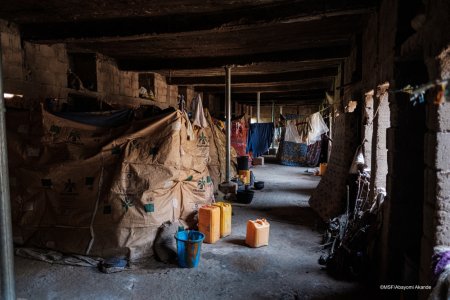 How to feed their families when they have no income and nowhere to grow their own food is a major concern. "Our biggest problem here is food,” says Abbas. “You know, as villagers our main occupation is farming, but now we can’t farm and we can’t feed our families.”

Teams from Médecins Sans Frontières/Doctors Without Borders (MSF) have been working in Anka since 2010, where they run a 135-bed hospital for children. They are currently providing the displaced people in the town with medical care, clean drinking water, plastic sheeting for building shelters and essentials such as cooking utensils and blankets.

MSF’s hospital in Anka is seeing large numbers of malnourished children as a result of the food shortages. The same is true in Shinkafi and Zurmi, where MSF has worked since 2019. In Shinkafi, MSF runs a number of services in the town’s general hospital, including a 33-bed therapeutic feeding centre. In Zurmi’s hospital, MSF runs a 30-bed feeding centre. And it was the similar situation in the state capital, Gusau until April. Between January and October 2020, MSF teams treated a total of 20,260 children for malnutrition in Anka, Shinkafi, Zurmi and Gusau.

“When the peak season for malaria started”

Malaria, which can be exacerbated by malnutrition, is also a major concern. MSF teams have seen rising numbers of children with severe forms of the disease. 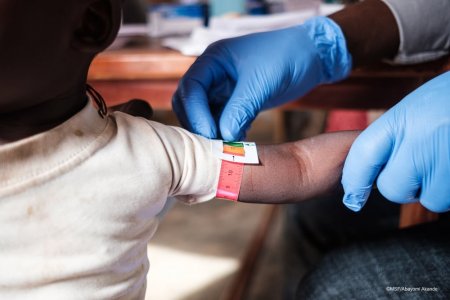 “When the peak season for malaria started, the cases we were seeing were beyond all expectation,” says Dr Salih Muhammad Auwal in Shinkafi hospital.

“We were admitting 25 to 30 children with severe malaria each day.” MSF responded by increasing the number of beds from 19 to 54, setting up additional wards in tents and hiring extra staff. From January to October 2020, MSF treated 35,358 patients for malaria across Zamfara state.

MSF teams also provide medical treatment and psychological support to survivors of sexual violence, treating 312 people in Anka, Shinkafi and Zurmi in the first 10 months of 2020.

“Bed space is really a challenge”

With so many urgent medical needs, the few health facilities that exist are very overcrowded. “Bed space is really a challenge,” says Grace Bwete, MSF midwife supervisor at Shinkafi hospital. “We have 53 beds in the paediatric ward, 33 in the feeding centre and 6 in the emergency room. Most patients who come to us are in a severe condition and we cannot send them back, so we admit them even if we are full.”

More skilled health workers are urgently needed in medical facilities across Zamfara state to meet the medical needs of people affected by the conflict. “We are trying to find and bring in even more skilled staff so we can manage all these patients,” says Bwete. 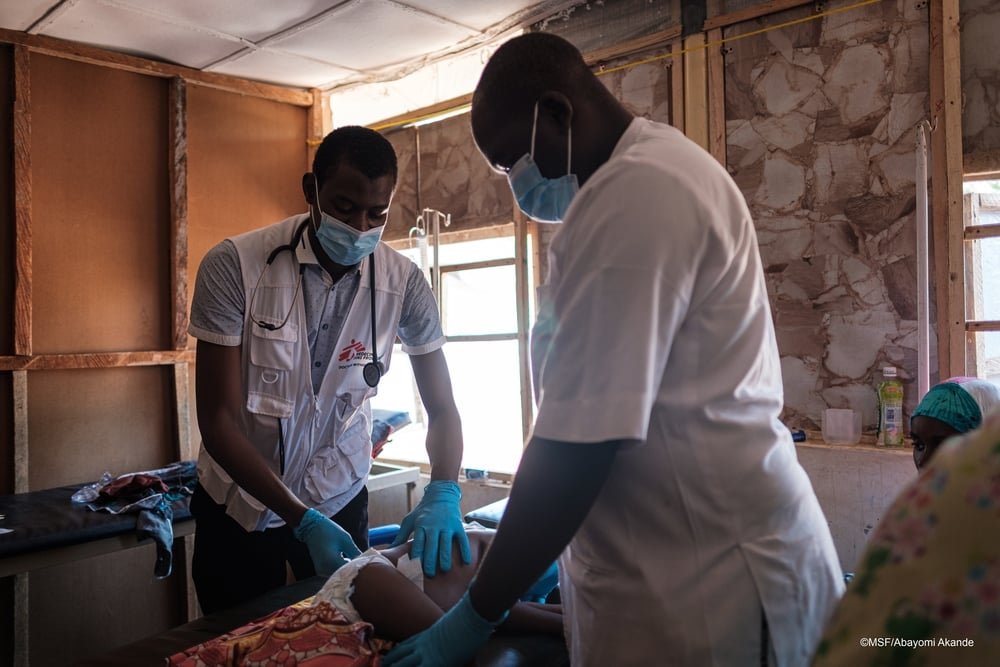 As the only international aid organisation permanently working in Zamfara state, MSF is calling on local and international organisations to mobilise and help provide assistance to address people’s needs. The displaced people MSF’s teams talked to are also calling on authorities and humanitarian organisations for increased assistance, but so far these calls have largely gone unheard and unanswered.

"We are pleading with the government to help us with food and ensure that peace is restored to our communities,” says Fatima. “We would like to go back and rebuild our houses and start a new life.”

Help us save lives: donate today >