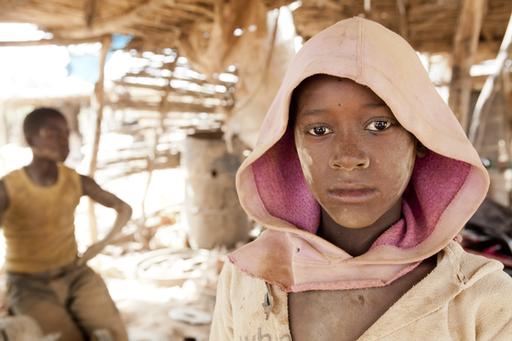 MSF is encouraged by news that funds to remediate Bagega village, an essential part of the fight against the Zamfara lead poisoning crisis have finally been released, and work has begun in the village.

The remediation process removes lead from the environment. Without it, children are continually re-exposed to lead toxins, rendering medical treatment largely ineffective.

Hundreds of children suffering from lead poisoning in Bagega have been waiting for more than two years for their village to be cleaned – and to receive the urgent medical attention they need.

The Federal Ministry of the Environment visited Zamfara state last week and announced the start of remediation activities in Bagega, together with the Zamfara Environment Ministry and Terragraphics International Foundation. Since the 11th February, TerraGraphics and Ministry of Environment teams have been working in Bagega.

“MSF is very happy to see that the work has finally begun after such a long delay. We have long been preparing to provide lifesaving treatment to the children of Bagega,” said Ivan Gayton, MSF country representative in Nigeria.

"We can only begin, however, once the remediation process is well underway, and neighbourhoods are certified free of contamination by environmental engineering experts such as TerraGraphics.”

Acute lead-poisoning in children can cause severe brain damage and death. It puts children at risk of loss of appetite, vomiting, abdominal pain and weight loss, as well as long-term mental retardation, behavioural problems and kidney failure.

MSF, in collaboration with the Ministry of Health, has been treating victims of the Zamfara lead poisoning crisis – the worst outbreak ever recorded – since it was first discovered in 2010, and has so far treated over 2,500 children.

MSF looks forward to working closely with the Ministry of Environment expecting that the newly-released funds will be used promptly, appropriately, and according to the plan and memorandum of agreement signed between TerraGraphics and the Ministry.

Remediation can only be carried out in the dry season, and a half-completed remediation is not effective as there is a risk of cross-contamination from the areas not yet cleaned.

“Unfortunately, the delay in the release of the funds will put our field teams under extra pressure to complete the remediation on time” said Simba Tirima, Director of Field Operations for the TerraGraphics Foundation.

“If we do not complete the remediation before the rains begin, the success of the remediation will be compromised. But TerraGraphics, in collaboration with Commissioner Lugga, and teams from the Ministry of Environment, will work around the clock to ensure that the children of Bagega have every opportunity to receive treatment by MSF as soon as possible.”

Ultimately, solving the Zamfara crisis requires a triple approach: medical treatment, decontamination of the environment, and safer mining practices. MSF maintains its position that safer mining practices must be introduced to ensure that people involved in mining and processing ore can do so without exposing themselves or others to lead poisoning.

MSF is a medical humanitarian assistance organisation that has been providing emergency medical services throughout Nigeria since 1971. MSF is not affiliated with any religion, government agency or political party.

Notes
1. In March 2010, MSF responded to reports of children dying mysteriously in communities across Zamfara state, northern Nigeria. An estimated 400 children died, and thousands more were discovered to have excessive and unprecedented levels of lead in their blood. It was the worst recorded lead poisoning outbreak in history.