Nigeria: “The situation in northeast Nigeria is deteriorating after years of conflict”

Luis Eguiluz is the head of mission for Médecins Sans Frontières / Doctors Without Borders (MSF) in Nigeria. He explains the challenges hundreds of thousands of displaced people are facing, while living in isolated enclaves controlled by the military in the northeast of the country.

“It may not have hit headlines in the same way as a few years ago, but the humanitarian situation in northeast Nigeria, where about 1.7 million people have been displaced, is  deteriorating. The long-lasting conflict between non-state armed groups and the military continues to displace more and more people, who are arriving to a series of garrison towns with very limited capacity to absorb new arrivals. Security perimeters in these enclaves remain very restricted, and while assistance continues to be provided by aid organisations, it has been of low standards. This has an even greater impact when you have more people in need.

All sectors of aid delivery have been affected: food distribution, water availability and shelter capacity. Even health provision is fragile in some locations. Some areas of the enclaves have problems with food supply, despite a wide change from general to targeted distributions. Actors who were key in the delivery of water have now quit and, overall, there is a lack of senior humanitarian workers in the more remote locations. 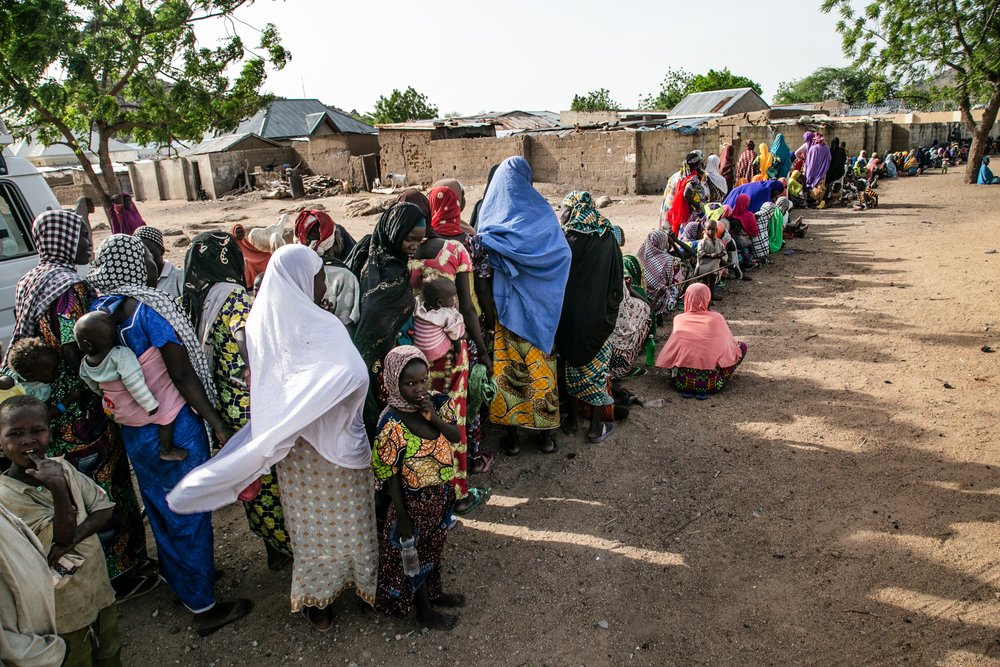 Donor fatigue, however, does not seem to be the problem. Funding keeps coming and nearly one hundred national and international NGOs are working in Maiduguri, the capital of Borno state. The challenge for many organisations is to find implementing partners and delivering programmes outside of the city.

There is also an issue with the perception of security. While it is true that a number of security incidents happen, compared to other major crises like Afghanistan, the Central African Republic or South Sudan, the current trend is much lower. Some humanitarian hubs have been created in enclaves providing accommodation, internet and security to facilitate the implementation of projects in remote locations, but they are barely occupied. At the same time, a large number of people are stuck in areas which are not accessible to humanitarian organisations, with little information about what their needs may be.

The problems in northeast Nigeria are changing, instead of being solved. Last year in the town of Pulka, close to the border with Cameroon, several hundred internally displaced people (IDPs) were living in extremely precarious conditions inside of the compound where we run a hospital. A transit camp was later built to provide temporary shelter. But one year on, several thousands of people are still living in overcrowded communal tents waiting long periods to get a family shelter. People often had to queue all day long during the dry season to be able to fill a container of water. It still feels like we are in the first phase of an emergency when in reality, this emergency has been going on for years. 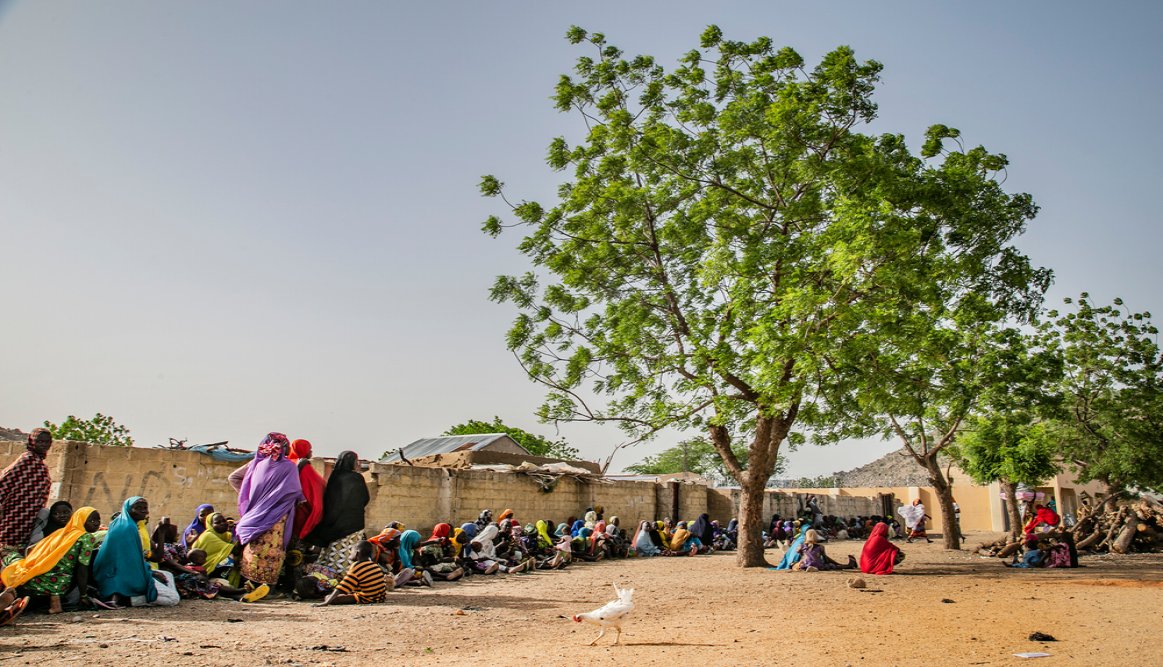 Given the restricted security perimeters, the fields in the enclaves can feed just a very small portion of the population, as there is not much space to cultivate crops. If people cannot farm or cultivate crops in a place like Borno, where farming is the major source of income, how are they going to survive? People are completely dependent on the huge food assistance programme currently in place. The only way to reverse this is if it becomes safe to leave the enclaves, but security incidents are still happening. Recently in Gwoza, when the army expanded the security perimeter of the town, a few people were kidnapped and killed.

On top of the situation, it is important not to forget the population are very fragile in terms of mental health. All of the IDP families we speak to have lost a relative to violence. They all share stories of torture, kidnapping, sexual violence… Most people have directly experienced a situation of violence, provoked by one side or another. Some people have lived in the middle of the conflict, others have suffered bombings…

Some people, who have already been displaced several times, struggle living away from their homes. Many are from surrounding villages where it is unsafe and have been relocated to the bigger enclaves, with the added burden of being far away from their family, or from a particular ethnic group. Many women are alone: their husbands have died or are missing; they were separated for years from their parents and repeatedly abused. 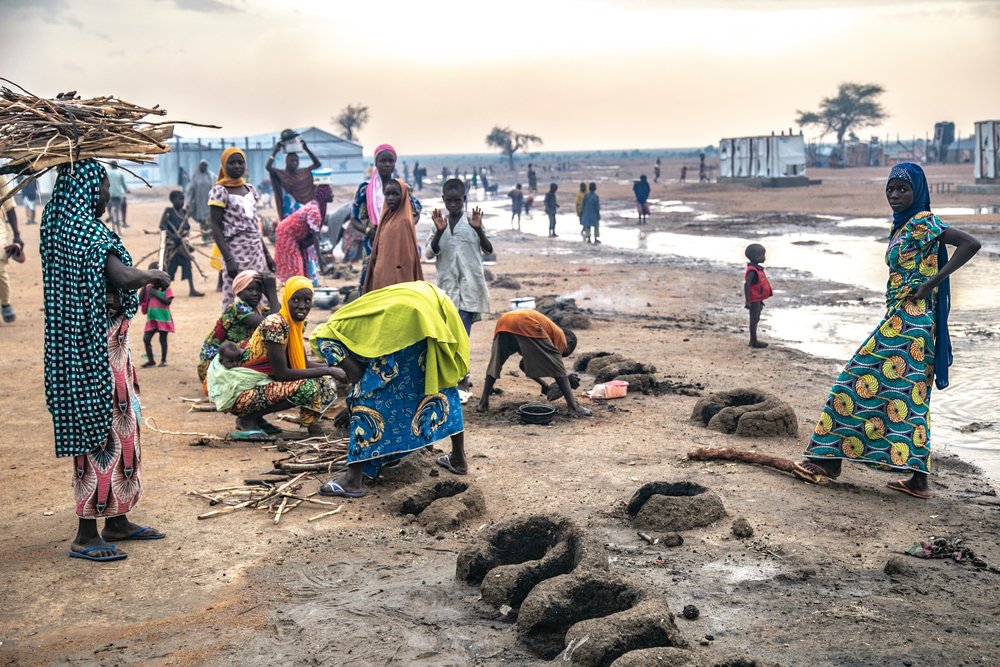 Igor Barbero/MSF
Women prepare the evening meal for their families inside the camp for internally displaced people in Pulka town.

Plans are in place for tens of thousands more people who are currently living in Maiduguri, or in refugee camps in Cameroon, to be relocated in the coming months. While people are encouraged to move rather than forced in places like Pulka or Gwoza, the reality is the places they are moving to are not prepared to provide even the most basic services.

In Pulka or Gwoza, towns that are regularly receiving displaced people, our teams hear often complaints from the new arrivals and some of them even state they would prefer to go back to the bush, given the living conditions they find in the towns. Today, displaced people in Borno state are totally dependent on humanitarian assistance. Their coping mechanisms have been completely exhausted and their dignity has been affected as a result.”

In northeast Nigeria MSF is providing primary and secondary healthcare in ten locations across Borno state and in the capital of Yobe state, Damaturu. Through permanent teams or during regular mobile clinics, teams run nutrition programmes for malnourished children, provide mental health support, respond to disease outbreaks and provide emergency paediatric care among other services.