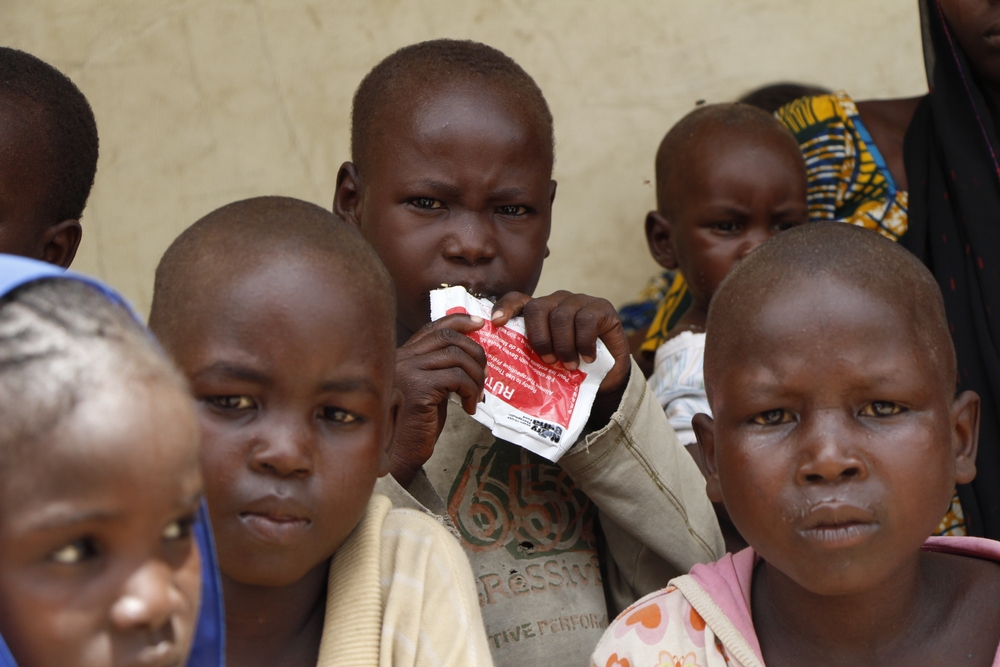 Nigeria: "We are too scared to go back"

An extremely critical health situation is unfolding in Borno State, Northeastern Nigeria. Many people are either displaced or cut-off, in enclaves outside the state capital of Maiduguri and are in urgent need of food, medical care, drinking water and shelter.

“We received barely two kilograms of food per week... Everybody got the same amount, whether you were alone or if you had 10 children.”

Maka is suffering from severe acute malnutrition, a condition rare in adults and proof of the acute food crisis the population of Banki has been experiencing for the last four months.

Josephine Makamukanga/MSF
Maka, with one of her two children in Mora Hospital in Cameroon.

She was accompanied by her five year-old grandson, as well as her niece who brought her own 11 month-old son. The two children were also suffering from very advanced malnutrition and needed to be admitted to hospital urgently for life-saving treatment.

Maka had lost her smile, she spoke very little and her emaciated face was devoid of any expression. Nine days after she was taken into care by MSF teams, Maka was getting better.

Forced to ration the food

"Life became very difficult. We received barely two kilograms of food per week, and most of the time it was rice or corn. Everybody got the same amount, whether you were on your own or if you had 10 children.

"I had to ration the food, because if I had cooked enough for everybody to feel full, we wouldn’t have had anything left to last us until the next food delivery.

"We were entitled to one bucket of water a day, which wasn’t enough, as that one bucket of water had to be used for drinking and washing our pots and clothes. Sometimes, we didn’t even get that much. In terms of healthcare, occasionally the authorities sent in medical staff, but they never stayed in Banki for very long.

Too scared to return

"I hope that my children who are still in Banki are still receiving at least the small amount of food they are entitled to. That’s what we were promised. But what worries me most of all is the lack of security.”

Today Maka's face shows the hint of a timid smile, reflecting her sincere gratitude. However, she cannot help but worry about the future that awaits her and her family.

“I’m happy that my children and I can recover here in Mora. Once we are better, if we can get by and work a little so we can live, I will go back to my husband in Banki. But we can’t do anything. My wish is for my children and family who are still in Banki to join me here in Cameroon.

"We have some cooking equipment, a little food and we are fighting to survive in safety. We would also like to stay near the hospital. Even though Nigeria is our home, we are not free there and we are too scared to return.”

“There is nothing left in Banki”

Dayo, 31, was referred to Mora Hospital in Cameroon in late July by MSF teams in Banki, Nigeria. She accompanied her sick four-year-old son, Barine. The child urgently needed to be admitted to hospital as he was suffering from severe acute malnutrition.

Before arriving in Mora, Dayo says her hunger had been so severe that sometimes she felt she was losing her mind.

“When somebody spoke to me, I couldn’t even tell if it was a man or woman.”  She had refused to take the rare medication that the medical teams in the area prescribed after a consultation. On an empty stomach, the tablets cause unbearable side effects.

Nine days after Barine was hospitalised, his health has improved significantly, even though he is not yet able to swallow the doses of therapeutic food required to treat his malnutrition. Unfortunately, two of the five children who MSF referred at the same time as Barine have since died. Despite being admitted to hospital, their condition was too severe.

Like Barine and his mother, over 15,000 displaced Nigerians have been living in catastrophic conditions for nearly five months in Banki. Devoid all activity and impossible to leave, Banki now resembles a ghost town.

Josephine Makamukanga/MSF
Dayo, 31, was referred to Mora Hospital in Cameroon in late July by MSF teams in Banki, Nigeria.

"Our village was burnt down"

“I come from a village 15 kilometres from Banki. One day, armed men arrived in our village and forbade us from working or travelling. They were violent and terrorised us. My husband, children and I fled into the bush, armed with only machetes and sticks.

"That’s when hunger set in. We cooked what dried millet and beans we were able to obtain. We could only cook during the day as at night, the fire would have attracted the attention of the people we were trying to hide from.

"Then our village was burnt down. I lost my mother, father and mother-in-law in the violence.

"We arrived in Banki with nothing, not even a plate or a pot, and I had only the clothes on my back. We couldn’t leave the town and there was nothing to do apart from wait for the delivery of supplies, upon which we were entirely dependent. Luckily, the authorities are distributing some food to the population, but it really is not enough.

"We receive barely two kilograms of rice or corn per week, and sometimes it has to last two weeks. If we need fuel, we take wood from sheds to burn, and you can find various objects and utensils in abandoned houses.

"In all the time I have been in Banki, I have yet to see any soap. In addition, we have to be really careful with water, given that the little we receive each day has to be used for drinking, hygiene and washing our clothes.

Scared of going back

"Although Banki is my home, we are too scared to go back. I heard that in one night alone, three children and two women were kidnapped, along with all their food. I am so worried for my children there. I know that my younger brother is looking after them, but my other son is ill. Each time I get a meal in hospital, I think about the people who are still there.

"I want all my family to join me here. I would be happy to live with them underneath a tree, as long as it were here. I don’t want to return to Nigeria. There is nothing left in Banki.”