No suitcases for New Year’s Eve in Venezuela

New Year’s Eve in Venezuela used to be celebrated with various rituals: grapes and lentils, yellow underwear, a handful of money, and, after midnight, a suitcase was taken around the block to invite opportunities for travel.

But Venezuelans no longer celebrate the end of the year with suitcases. For those who remain in the country, they are now symbols of sadness and family separation. For those driven from Venezuela by its political, social and economic crisis, they are a painful reality. Painful because they leave behind family, home and work, but also because of the lack of aid they receive in host countries.

The lack of humanitarian aid

In Colombia, where more than 1.6 million Venezuelans are estimated to live (of the more than four million who have left their country), the needs are enormous: food, water, protection, adequate access to health, housing or work. For those who arrive in more rural areas or in places such as northeastern Arauca, where active armed groups are present, humanitarian aid is even scarcer. 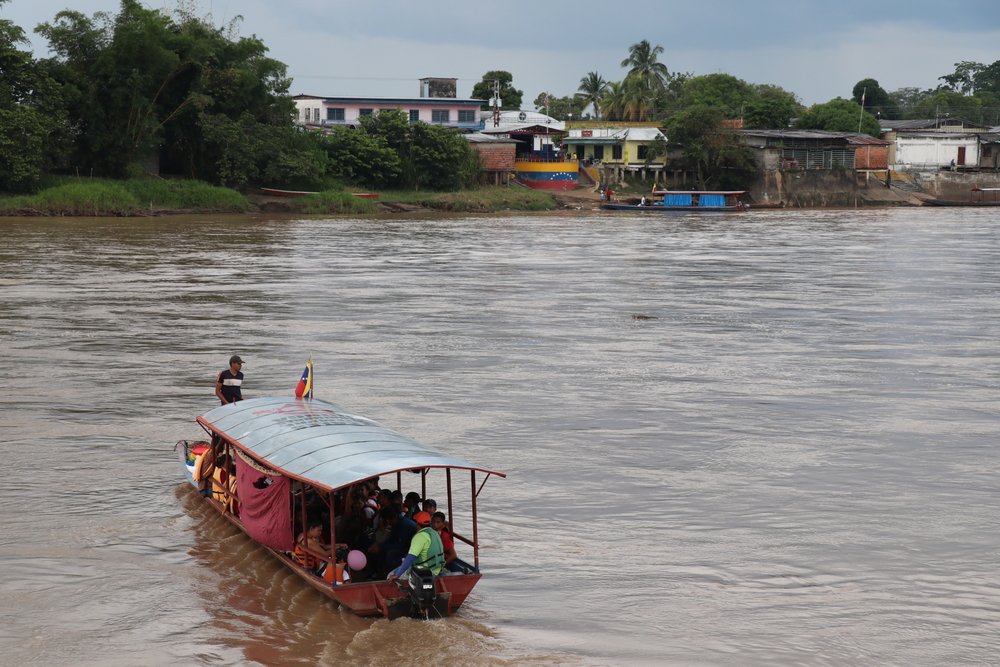 MSF/Esteban Montaño
Arauca river is the border between Colombia and Venezuela. Every day hundreds of Venezuelans cross to Colombia seeking for medicines, food and healthcare.

Elías* is 51 years old. Dark glasses protect his eyes, which are affected by diabetic retinopathy, a condition that impairs his vision. He arrived in Tame (Arauca) 15 days ago with his suitcase, the desire to be reunited with his daughters and have the dialysis he needs.

"In Venezuela, medical tests are expensive, everything is dollarised and supplies are missing,” he says. “Machines don’t work properly; they break down and are no longer repaired. Medical and technical staff have also left the country."

Elías has come to MSF’s clinic in Tame to find out how he can access dialysis. MSF provides basic healthcare and psychological services in Tame, as well as information. 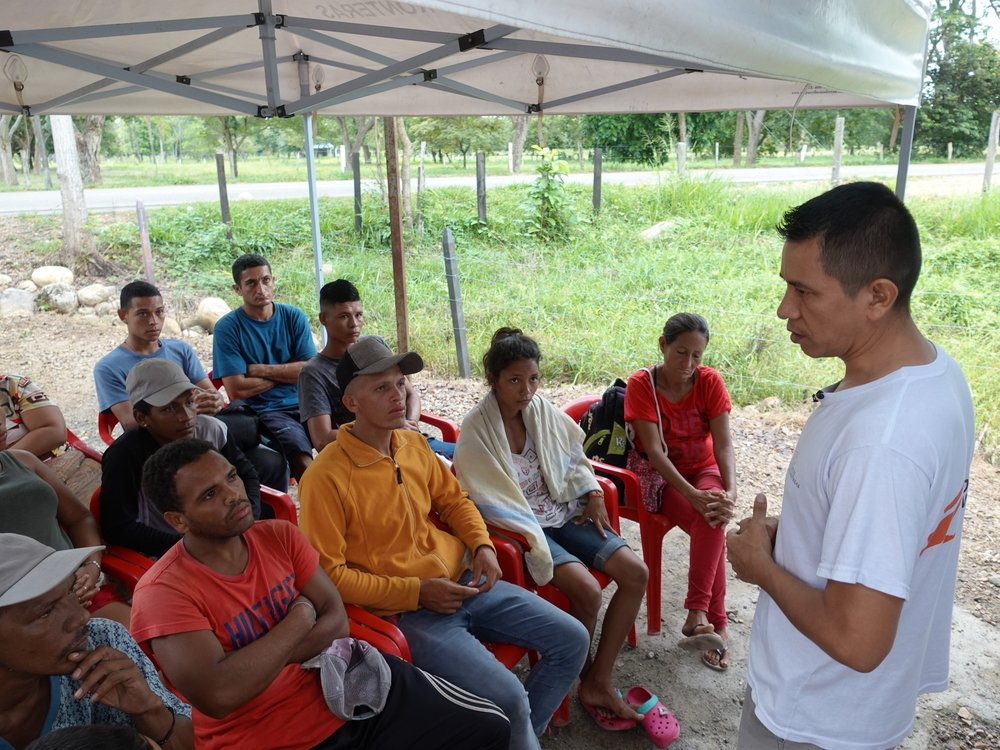 MSF/Yves Magat
An MSF team in Tame, Arauca provides basic treatment and information to people walking from Venezuela. The team operates from a shelter by the road to get to them.

Colombia only guarantees Venezuelans emergency healthcare and does not treat patients with chronic diseases. Elías’ only solution would be to request asylum for disability. And that would take time.

“At least here at MSF they have examined me and told me that I am stable,” says Elías, who was a merchant in his country. If he is granted refugee status, Elías will not be able to return to Venezuela, where his oldest daughter still lives. He is accompanied by his youngest daughter. He has three in Colombia, aged 19, 17 and 24.

"We want to be together," he says, breaking into sobs. His daughter, moved by his tears, says they will be OK, that she sells coffee on the streets.

Peddling coffee, ice cream, fruit, jobs on farms or construction sites, begging or rummaging through trash to be able to sell cardboard, iron, glass or cans are the limited and poorly paid occupations many Venezuelans in Tame are involved in. Many of them live on the streets because they can’t afford to pay for accommodation. When they have a roof over their heads, several families share the same house. Even so, Colombia was their only option.

“In Venezuela, my daughter was dying of malnutrition. Before I let a child die of malnutrition in Venezuela, I would thousand times rather bring her here. At least someone will give her a cookie, so she can eat,” says Juan Marcos *, a young father of three.

In Yaracuy, he was a battery mechanic; in Tame, he recycles garbage. His child is better, although she has been treated by MSF for skin rashes caused by sleeping on the street.

Dire need and lack of employment force many women to become sex workers. Compared to what their compatriots can earn, (and what they can send to their relatives in Venezuela), the pay is better.

Twenty-one-year-old Victoria* is from Valencia and has two children. She was convinced to leave Venezuela and engage in prostitution in Colombia.

“They told me that it was possible to live well here, to eat well, that you could send money. But I didn't know how difficult it was,” she explains.

Eight people in Venezuela – her parents, two brothers, and four children, including her own – were dependent on her earnings in La Carrampla, a designated “tolerance zone” where the brothels are located in Saravena (Arauca).

"They abuse you, they grab your breasts, they grab you... they are violent," she says. Her weight dropped from 70 kilos to 45 because of fever and vomiting but she’s now recovering. She has left La Carrampla and, for the moment, doesn’t work at all. She lives with her new partner and is distressed because she can no longer send the same amount of money to her family.

Victoria came to MSF because of her physical condition and continues to receive mental health care for everything she’s been through.

MSF has dedicated several days to caring for the area’s sex workers, the vast majority of whom are Venezuelan.

Jesus* also lives in Saravena. The 27-year-old was diagnosed with HIV five years ago and stopped his treatment two months ago when he left Táchira (Venezuela).  He has managed to find someone to supply the pills he needs from the black market. 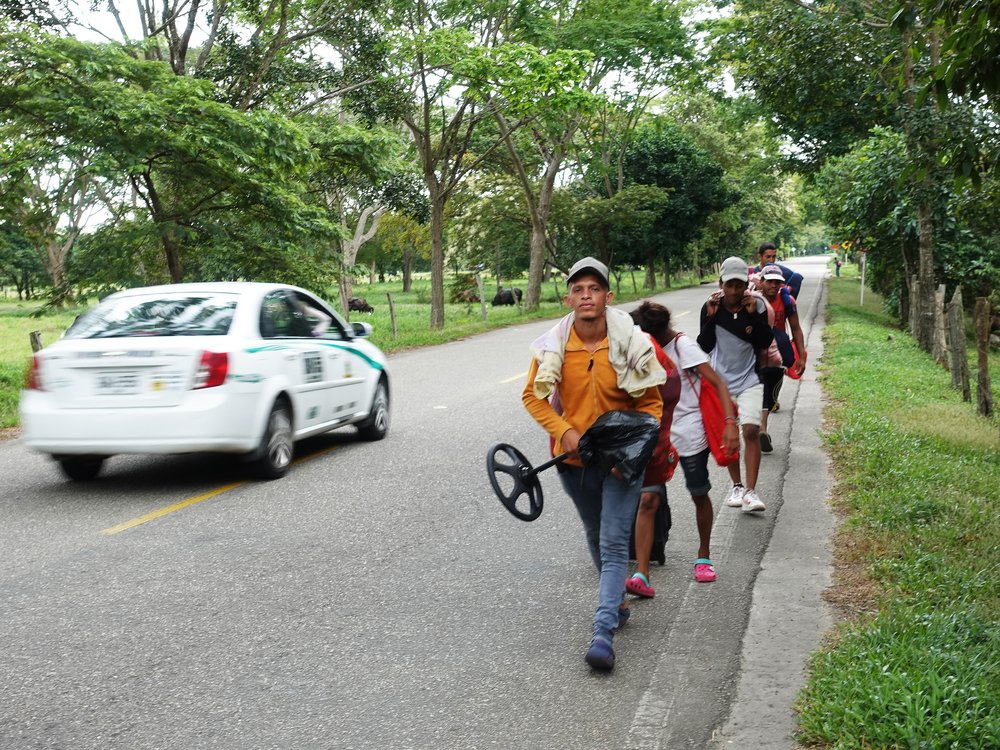 MSF/Yves Magat
An MSF team in Tame, Arauca is focusing on treating people walking from Venezuela, more than 1,000 of whom enter Colombia in the Arauca area each month, on their way to other cities in Colombia or neighbouring countries.

“I go to MSF’s mobile clinic for check-ups because of the disease,” he says. “I would like to have money right now to return for treatment in Venezuela, although I don't know if I’ve been taken off the register or if there would be medication. Then I would return to Colombia. Venezuela is just fading, disappearing. I also come to MSF because I have suffered a lot of abuse throughout my life and I need psychological support. At the moment, I can only get treatment for HIV in Cúcuta and going there by bus involves a lot of time and money.”

Venezuelans affected by HIV have only two places to go for free treatment in Colombia: Cúcuta and Bogotá. In the coming weeks, MSF will begin providing treatment in Tibú and Tame, after reaching an agreement with Aids Health Care Fundation Colombia.

"You wonder if you would help your family more by being in Venezuela rather than coming here because the situation is very difficult – there is hardly any work," says Gregory, 22, a cook from Barquisimeto.

“In Venezuela, my family barely ate although I was able to eat in the restaurant where I worked. Not even three salaries were enough for us to eat anything other than rice or cereals.”

Gregory bought his bus ticket with the redundancy pay the restaurant gave him. He has come to MSF’s mobile clinic in Saravena with his 16-year-old cousin, Carlos.

"I had a very bad cold with fever and everything and, although I’m better, I haven’t seen the doctor in a long time, so I want to be sure that I am OK," he says. Both young men are underweight and Carlos a little anaemic. They worry about not having work. “At least in Colombia there is food. In Venezuela, there is food, but impossibly expensive and all in dollars." Gregory and Carlos live with Gregory's mother.

“Before, on New Year’s Eve and at Christmas, there were at least 20 or 30 of us. Now, there’ll be five of us at the Christmas table,” says Gregory.

Columbia: The uncertain lives of Venezuelan migrants on the Colombian border >