Northeast Colombia: Life in a migrant settlement at the heart of the conflict

In the settlement of El Divino Niño more than 400 Venezuelan and Colombian families were struggling with poor access to healthcare. By working in partnership with MSF, they have been able to greatly improve the situation.

"It happened at nine o'clock on our first night in the settlement. We heard shots nearby and ran for cover. After a while we returned, when things had calmed down. It was very hard. We were really scared, but we had no other choice. And we are still here.”

This is how Ana* remembers the moment when, together with around 100 Venezuelans and Colombians, they occupied a plot of roadside land on the outskirts of La Gabarra, a border town in northeast Colombia that has been a conflict zone for more than five decades.

Forty-five year-old Ana returned to La Gabarra in 2016. She had lived most of her life in Venezuela, having arrived there as a month-old baby with her family who were fleeing the conflict in Colombian. 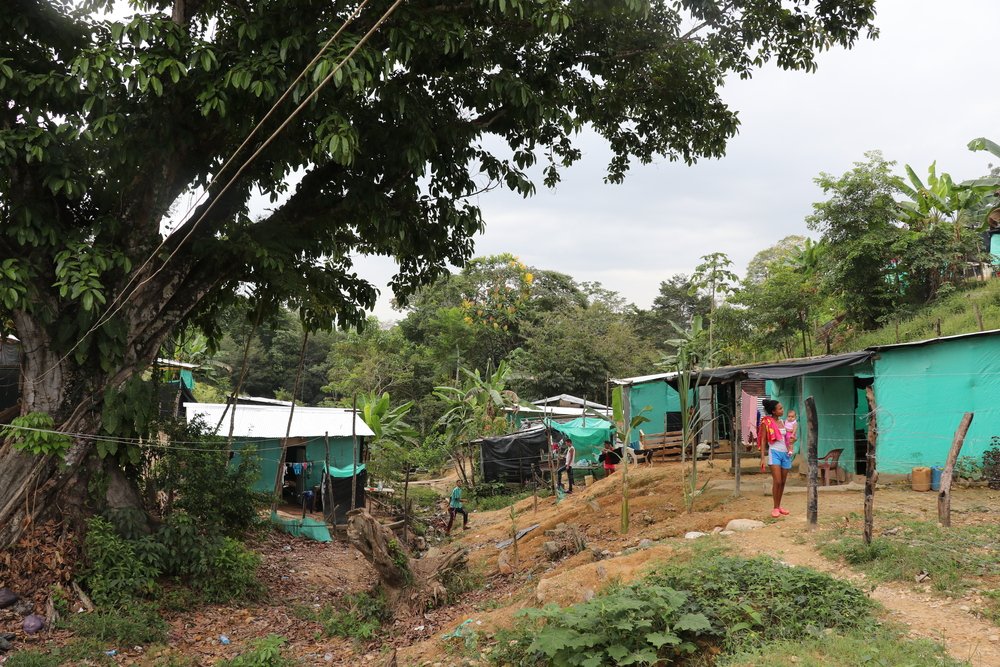 MSF
In El Divino Niño, water is scarce and poor quality. There is also no sewerage system and most of the people sleep on dirt floors in makeshift houses made of plastic and wood.

“We had a proper life in Venezuela. I sold hallacas [meat pies], sausages and empanadas [pasties] to pay for my children to go to school."

"But with the crisis there, when I realised that, even with my work, I couldn't feed my family, we took our things and returned to Colombia, to La Gabarra. At first we lived in rented accommodation, but given that here, if you pay the rent then you won't be able to afford anything else, we had to take over this land to ensure we at least had a roof over our heads.”

Two years after that first night, El Divino Niño [The Divine Child], as it was named, has become a settlement with around 450 houses, built mostly from round wooden poles for columns, construction tarpaulin for walls and metal sheet for roofs.

There is a water supply that reaches El Divino Niño, but it is erratic and only works every few days and only for a couple of hours. Electricity, the great pride of the community because they managed to install it on their own, works intermittently.

Some houses have tried to solve the lack of sewage pipes by using septic tanks. In places piles of rubbish are building up, despite the fact that for a few months they have been paying the municipal authorities to collect it.

Living amid violence and uncertainty

La Gabarra is 80 kilometres from Cúcuta, in Norte de Santander department. Since the late 1970s, this region has been fought over by guerrillas and gangs for its oil and gas fields, for the fertility of its lands for palm oil and coca crops, and for its key position on the border with Venezuela.

Although the situation was expected to improve following the peace agreement between the FARC and the Colombian government in 2016, the violence in Norte de Santander has persisted, unresolved, even increasing in recent months, and continues to effect communities.

The conflict has forced thousands of Venezuelans and Colombians to move.

In these two years it has all changed a lot; the only thing that has not changed is the fear we live with 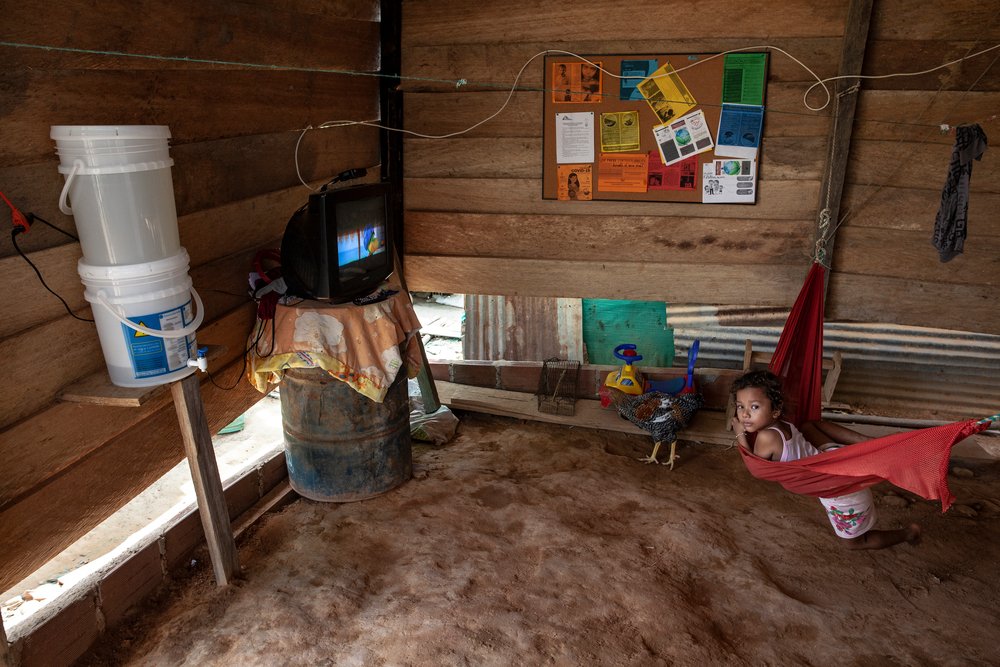 Photographer: Giovanni Porzio
Interior of a makeshift house in La Gabarra, Colombia. Three of the five most common diseases in the settlement originate from the use and consumption of unsafe water.

During the week, El Divino Niño is inhabited mainly by women and children. Most of the community’s men spend the week working on farms as raspachines, picking coca crops.

It is a risky and exhausting job, but also the main source of employment in the area.

“My partner works in the same things as everyone else here,” says Lina*, a woman from Zulia state who was also among the first inhabitants of the settlement. “It is the only option we have left to get the money to survive.”

Despite some improvements in access to public services, the living conditions for most families in the settlement remains grim, which has a direct impact on their health, especially their children.

“Here, babies get very sick from intestinal, respiratory and skin infections. There is also a lot of malaria,” explains Lina.

Diseases are aggravated by a lack of access to healthcare in a local public health system that has been overwhelmed by the scale of the needs.

“If your daughter has diarrhoea or a fever and you don't have the money for a private consultation, she won't get help anywhere,” says Lina.

“When Médecins Sans Frontières are here, we turn to them, but other times we have to go to a pharmacy to see what they can prescribe or prepare a herbal remedy at home.”

The arrival of thousands of returning Venezuelans and Colombian migrants has been an enormous challenge for the Colombian health system, especially in regions where there is weak state presence and international aid does not reach. 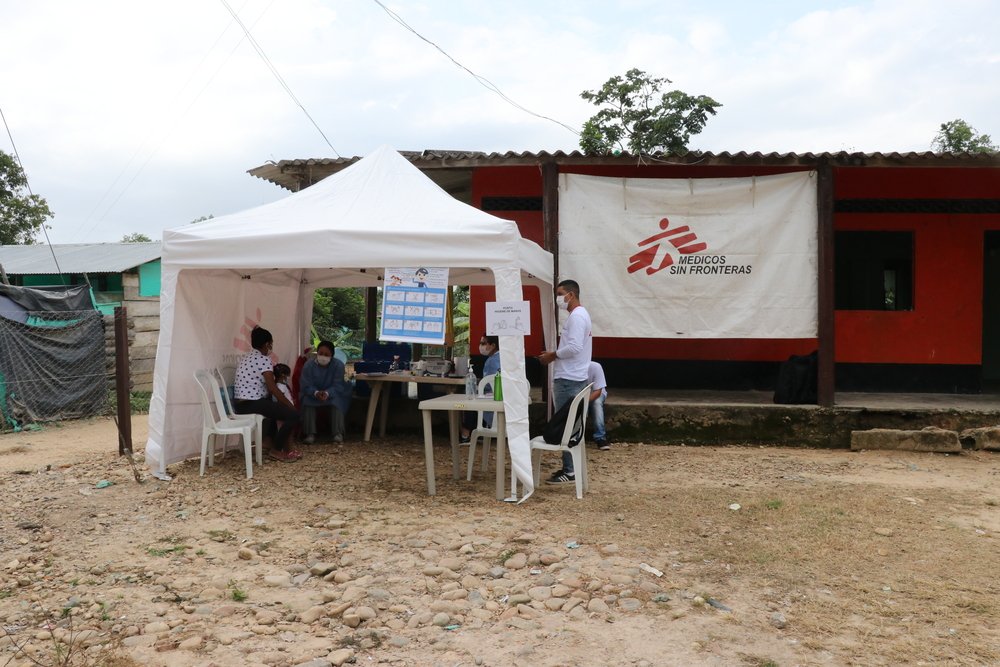 MSF
During this year, we have carried out community activities in the El Divino Niño neighbourhood of La Gabarra, an informal settlement which houses at least 2,000 Venezuelan migrants and Colombians who have returned from Venezuela.

“We began providing healthcare services at the end of 2018, with biweekly mobile clinics, but in August 2020 we decided to modify our approach,” says Johana Vinasco, coordinator of MSF's medical activities in the Catatumbo region.

“Because the illnesses we were seeing in the clinics were mainly caused by the poor living conditions in people's homes we decided to work on that, by improving their access to clean water and proper sanitation, and by doing community health promotion.”

The implications of unsafe water

Analysis by MSF found that three of the five main causes of illness in El Divino Niño were related to the use and consumption of unsafe water.

Water is often collected from unhygienic sources, including rainwater and a nearby river. It is stored in inadequate conditions, which become breeding grounds for mosquitoes, and consumed without being properly treated. 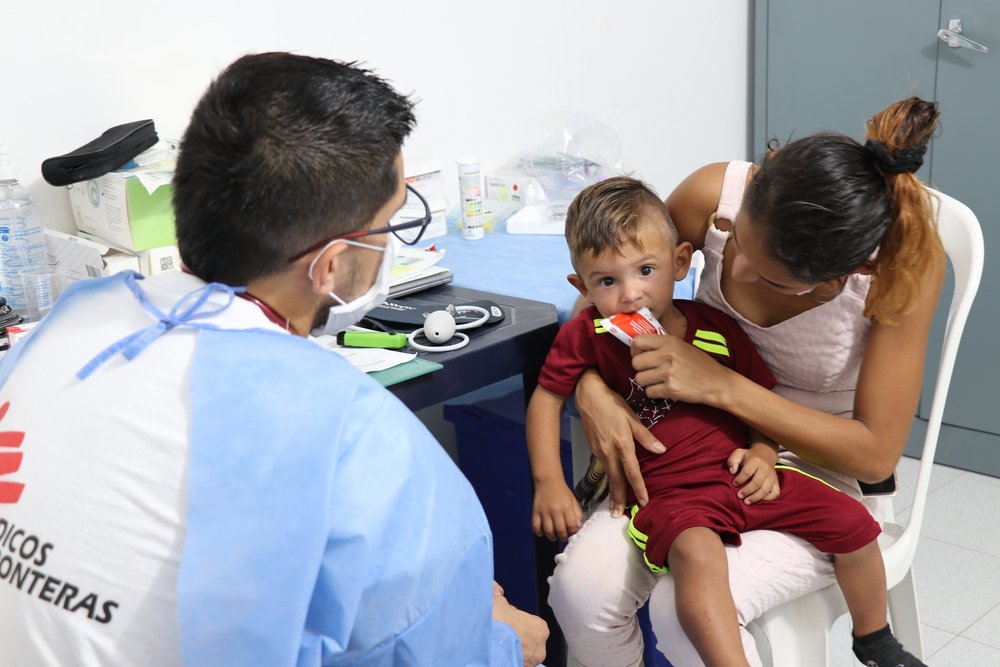 MSF
The presence of MSF in the informal settlements in La Gabarra seeks to strengthen health promotion and prevention activities as a key component of the comprehensive health of Venezuelan migrants and Colombians who have returned to this region.

Today, all inhabited houses in the settlement have a water filter made out of two plastic buckets, which costs no more than five dollars.

The device provides them with clean water and prevents more mosquitoes, the main cause of malaria, from breeding.

"Cases of diarrhoea caused by drinking dirty water have dropped to almost zero and we also have fewer cases of malaria because of improvements to the way we store water and how we handle household waste," confirms Lina, who is part of the health committee that was formed to facilitate access to the different services of the settlement.

"Now what we are concerned about is feeding our children. Many are underweight because their families aren't able to provide them with enough food."

Responding to this concern, between 24 and 27 February, MSF conducted a nutritional screening of 211 of the 214 children under the age of five living in El Divino Niño.

“It is a situation that can be managed through the use of therapeutic food,” says Vinasco.

“Although the inhabitants of the settlement have difficulty accessing a quality diet, which is a worrying factor, the number of children with malnutrition is low. Screening is also important for reassuring a community that it is normal for them to worry about the circumstances in which they find themselves.” 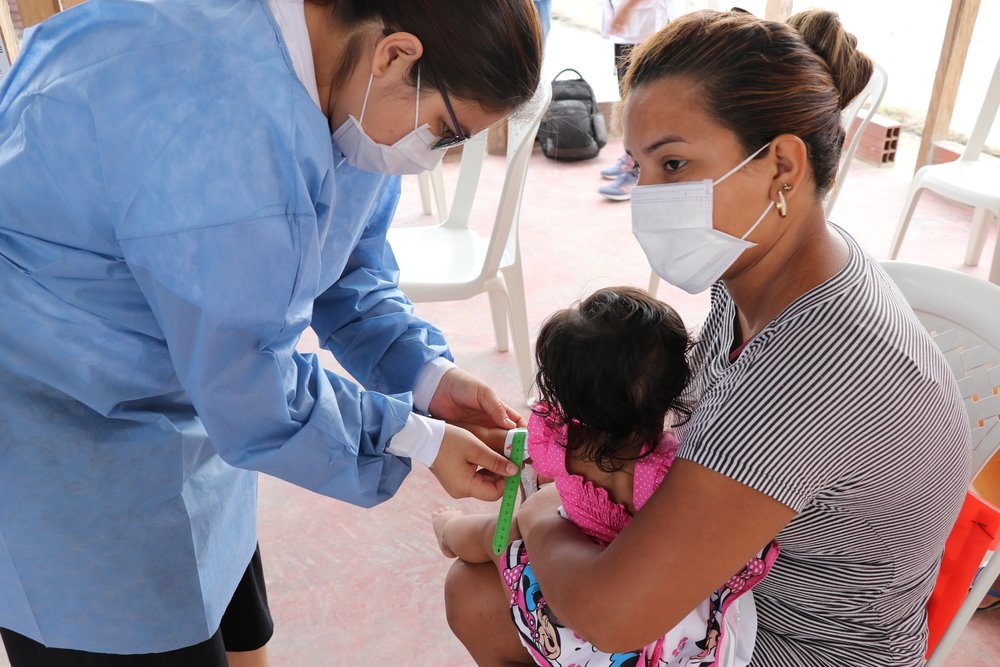 MSF
At the end of February, MSF carried out a nutritional screening of children under the age of five as part of the health promotion and prevention activities that MSF carries out in La Gabarra.

“Good news, thank God,” says Ana, with a smile. “Here we have had to get used to things that we never imagined and we know that the important thing is to survive. Anything more is a bonus," she concludes.

*Names changed for reasons of security.