Northern Yemen: Severe malnutrition on the rise among children in Abs 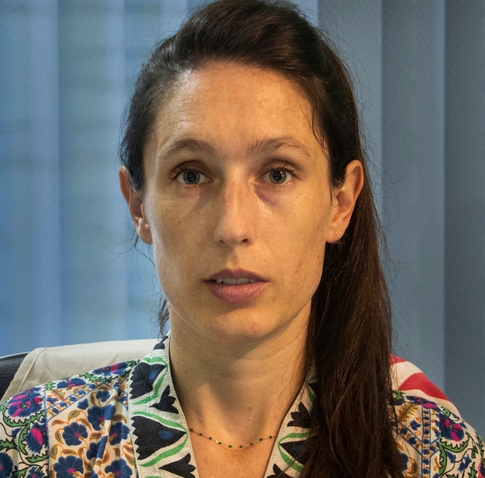 Hamdi is not yet two years old, but this is already his second time as a patient at the Médecins Sans Frontières (MSF) Abs Hospital, in northern Yemen. The first time he was five months old. Now, just over a year later, he is suffering from severe malnutrition with pneumonia. His eyelids are swollen, he has a constant cough and he has a hard time breathing. His family has lived in a country at war for the past six years, while he has known war for his entire life.

Malnutrition linked to war – no money, no food

Hamdi is one of more than a hundred children that MSF has treated at the Abs Inpatient Therapeutic Feeding Centre since the beginning of the year. Most of them are under five years old and all are suffering from severe malnutrition. 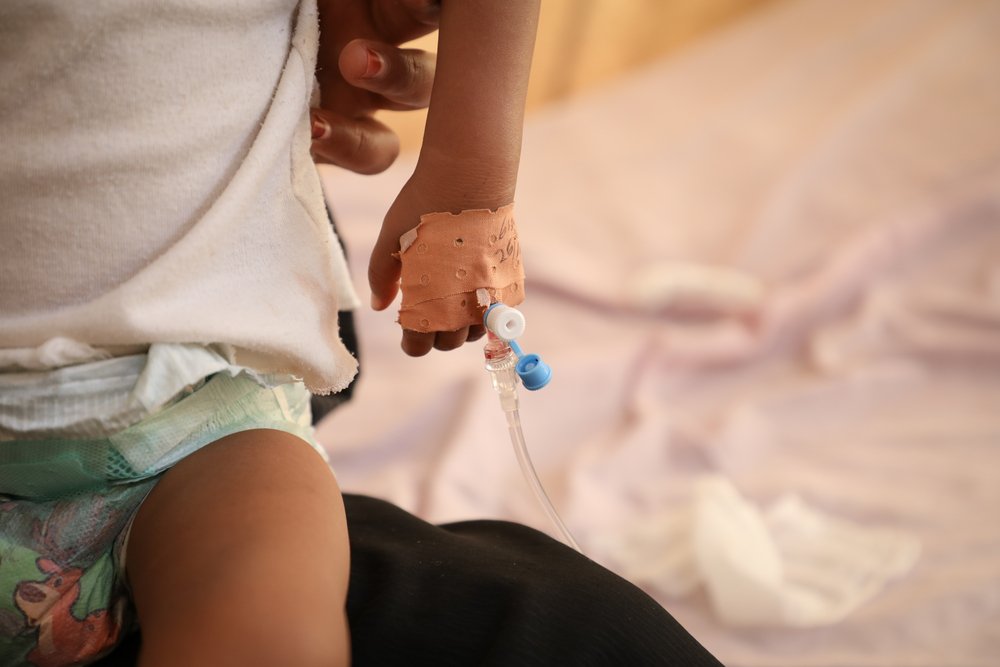 MSF/Majd Aljunaid
Wijdan, a year and a half old, is hospitalized in Ad Dahi hospital to receive treatment. “She had a high fever for 3 days when the fever got worse, I brought her to the hospital,” her mother said.

We always see a spike in cases in the hospital around this time of year, but these days it’s worse: cases are up 41% on the same six-month period as last year. It hurts to look at the children admitted to the 50-bed ward of this remote town.

There are many reasons why we are seeing malnourished children in Abs, but most of them are connected to the brutal, six-year long conflict that has plagued Yemen since 2015. 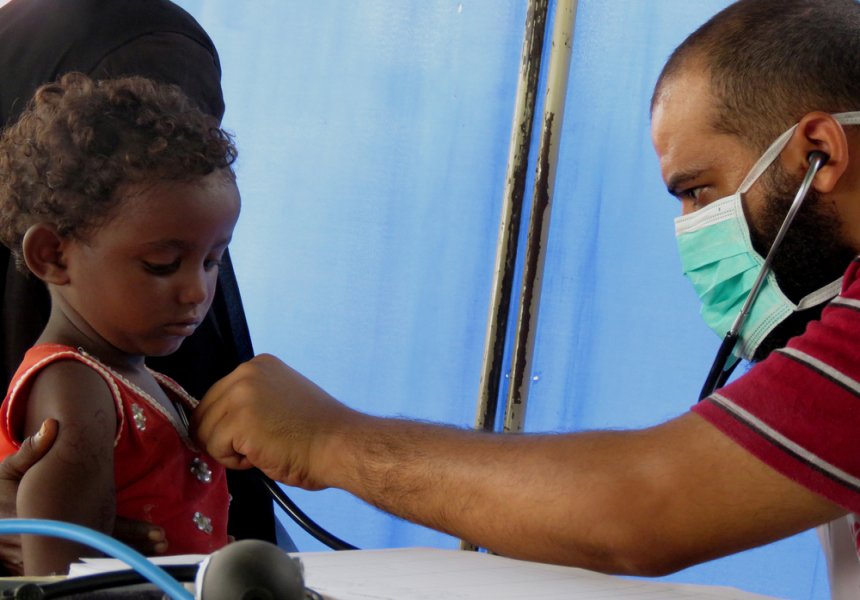 Pau Miranda/MSF
Dr Naseer Abdulkarim checks a child showing some respiratory problems (quite usual in the area when the winter starts) during a mobile clinic in Al Matayn, a few kilometres away from Abs. Yemen, November 2020.

The war has decimated the economy, destroying livelihoods so that people can no longer afford food to feed their families or fuel to travel to seek work or medical care.

Many public sector staff - including medical workers - haven’t been paid in years. Prices are constantly rising: without humanitarian aid, many families would not eat at all.

The vast majority of the Yemeni population relies on humanitarian aid for survival, but in spite of this clear need it is a constant challenge for humanitarian organizations to reach the most vulnerable populations. The humanitarian response for Yemen lacks continuity, is insufficient, and underfunded. 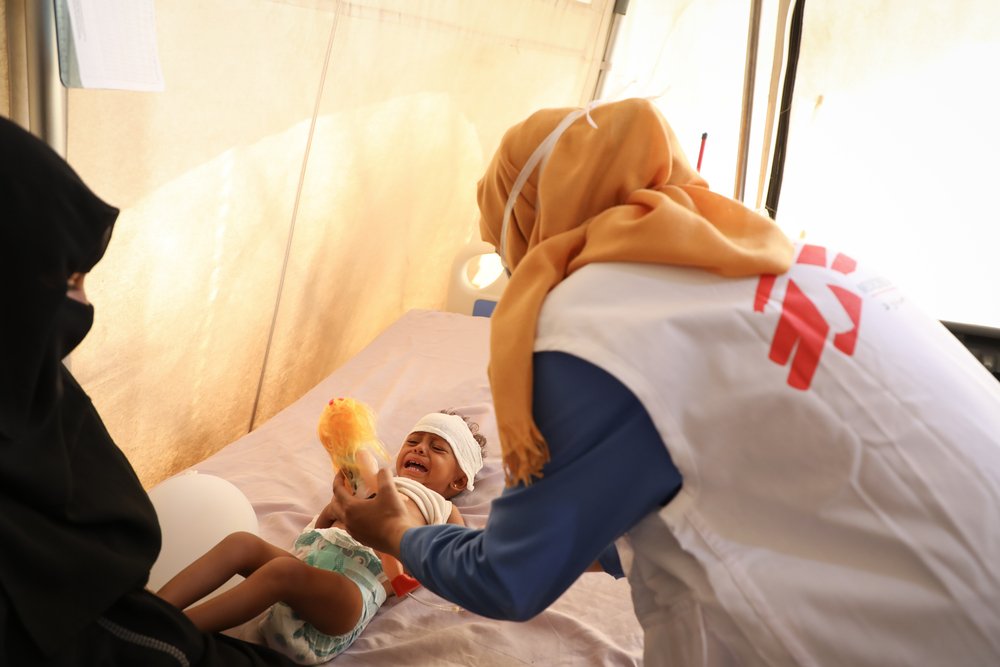 MSF/Majd Aljunaid
Wijdan, a year and a half old, is hospitalized in Ad Dahi hospital to receive treatment. “She had a high fever for 3 days when the fever got worse, I brought her to the hospital,” her mother said.

MSF has worked in Abs district for over five years. Providing more consistent and lasting nutritional support programs and improving access to water in both displacement camps and host communities would reduce the number of severely malnourished children arriving at the hospital.

Instead, the number of patients we treat often exceeds the capacity of the ward.

Malnutrition a slippery slope for other diseases

Malnutrition exposes children to a host of secondary diseases, which can be fatal if left untreated. Diarrhoea, measles and respiratory infections sound like normal childhood illnesses for many children around the world, but for children already weakened and lacking essential nutrients, and in absence of timely access to health care, they can have life-threatening consequences. 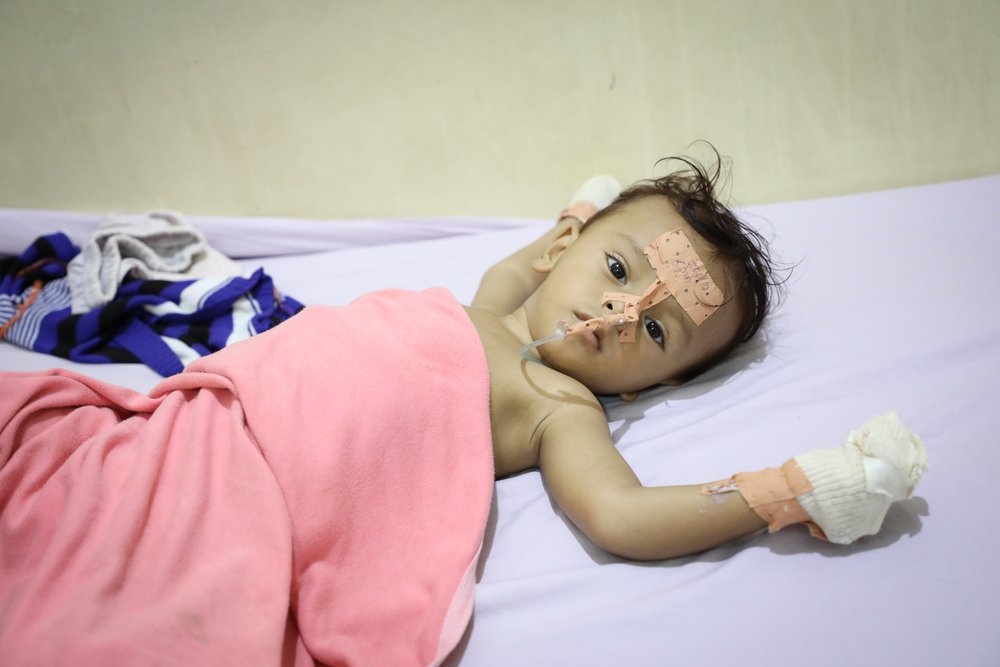 Many of the malnutrition-related health complications that we treat could be avoided with the provision of basic services at the primary healthcare level.

We know, from the thousands of patients that we treat in Abs Hospital every year, that Hamdi’s story is unfortunately a common one. The children that we treat are used to hearing their parents worry endlessly about the economic situation: fathers disappear for days looking for work, for fuel or for food.

Mothers do all they can to feed their families, and yet despite all of these efforts children are going hungry.

The children who we treat at Abs Hospital, who manage against all odds to overcome severe malnutrition, heart disease, pneumonia, and other serious illnesses, must not be failed by those who have the power to help.

muriel boursier,head of mission in yemen

While this reality regularly appears in the headlines, we see little change on the ground. The world is busy with many other priorities, but it is hard to believe that governments and humanitarian actors in the twenty-first century cannot do more for children in Abs.

Yemenis are being pushed to the absolute limits of their resilience. The war has killed around 233,000 people since 2015. It has displaced millions, often multiple times. It has destroyed infrastructure and the health system in particular. 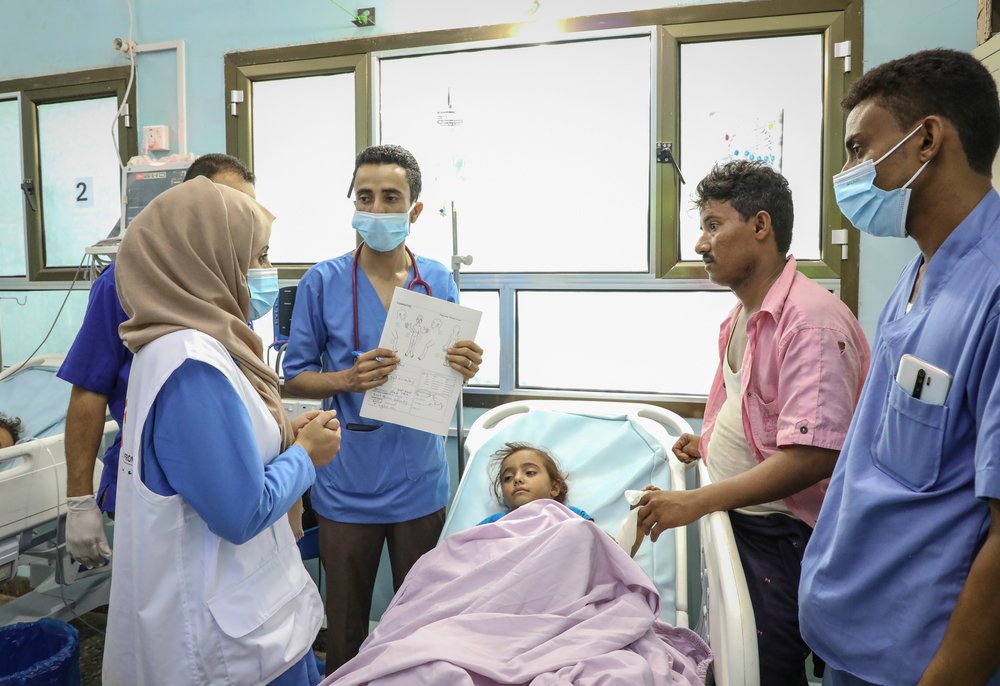 MSF/Majd Aljunaid
In 2020, MSF admitted over 18,900 patients in the emergency ward at Ad Dahi rural hospital.

Parties to the conflict, and the humanitarian community of donors and organizations, must ensure that families can access food and essential services, and that humanitarian assistance reaches those in acute need.