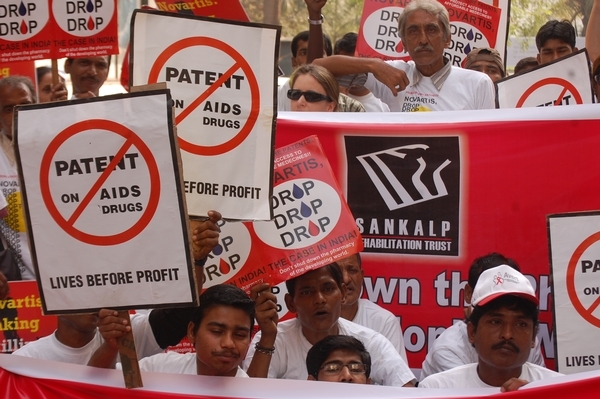 As shareholders of Swiss pharmaceutical company Novartis meet today in Basel, Switzerland, the international medical humanitarian organisation Médecins Sans Frontières MSF (Doctors Without Borders) called on shareholders to urge the company to drop its ongoing court case against the Indian government. MSF is concerned that the case could have a severe impact on access to affordable medicines for people across the developing world.

“Shareholders at this meeting need to know what the stakes are on this case and what the consequences will be,” said Dr. Unni Karunakara, MSF’s International President. “We are asking Novartis once and for all to stop this legal battle in India that is a direct attack on the pharmacy of the developing world. We will not stand by silently and watch our source of affordable medicines dry up in the future — we rely on these drugs to do our work in more than 60 countries today.”

The hearing is scheduled to take place before India’s Supreme Court in March, and India’s Attorney General has just been appointed to defend the case for the government.
“The implications of this case reach far beyond India and far beyond this particular cancer drug,” said Leena Menghaney, Manager for MSF’s Access Campaign in India. “Novartis shareholders need to question the company’s attempt to break a system on which millions of people in developing countries rely on for affordable treatment. We urge Novartis investors to tell the company to drop the case.”

Novartis first sued the Indian government in 2006, after a patent the company was seeking for the cancer drug imatinib mesylate was rejected.  India grants product patents in line with international trade rules since 2005, but in the interest of public health, India’s law is strict about what does and does not deserve a patent. Patents are not granted on modifications of drugs that already exist. Because Imatinib mesylate was the salt form of imatinib, the original invention behind the cancer drug, it was not granted a patent.

Since then, Novartis has been attacking this part of India’s patents law – called Section 3(d) - in the courts.  After losing a legal battle to have Section 3(d) removed from India’s patent law in 2007, the company is now trying a new legal tactic to weaken it.

A Novartis win will lead to Indian patent offices granting patents on modifications to drugs which would otherwise remain off-patent in India. This would take the substance out of a public health provision which has already demonstrated its importance in securing affordable access to key HIV, TB and cancer medicines.

MSF has launched a Stop Novartis social media campaign to draw attention to the implications of the case and to call on the company to back down.  Alongside other civil society organisations including Act Up, Oxfam and the Berne Declaration, MSF is protesting against the company’s actions outside the shareholder meeting in Basel and outside of Novartis headquarters in New York.

Generic medicines produced in India make up 80% of the HIV drugs MSF uses to treat 170,000 people in 19 countries.