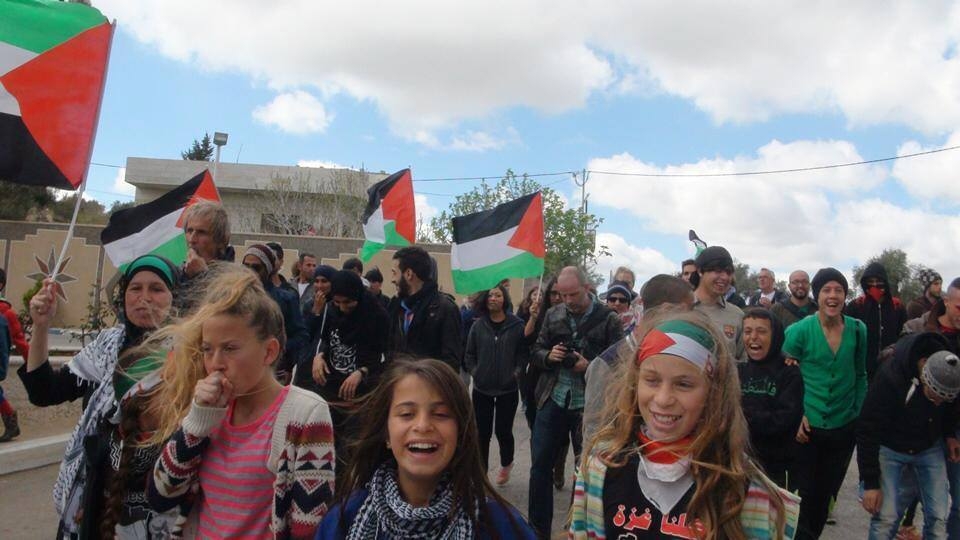 Nabi Saleh is a village located 20 kilometres north-west of Ramallah, in the West Bank, where 600 people live, all of them extended family sharing the same surname, Tamimi.

At the opposite side of the village, up in the hills, is the Halamish settlement, built in 1976 on land that still belongs to the residents of Nabi Saleh.

The occupation of Nabi Saleh

Since 2009 when the settlers took control of a nearby natural water spring and the lands which surrounds the village, Palestinians have been prevented from accessing the spring and only recieve 12 hours of running water a week. This is what sparked the popular resistance in December 2009, when the first weekly march was held in protest at the confiscation of lands and the seizure of their nearby water spring.

Since then, the villagers, sometimes joined by other activists, have hosted peaceful demonstrations from the mosque down the main road every Friday after prayer. Peaceful, that is, until they meet the Israeli soldiers who stop them and then the clashes begin.

“They start shooting rubber bullets, gas canisters, sound grenades and live bullets, and also spray houses and water tanks with skunk water [which smells like faeces, can provoke vomiting and remains for weeks],” explains Nareman Tamimi, one of the leaders of the protests.

According to her figures, since the demonstrations started in 2009, there have been 500 injuries (200 children and around 80 women) and 180 detainees, 16 of them women.

Retaliation by the villagers

The Palestinian youth respond with slingshots and hurling stones. Nareman and others respond with video cameras, filming to document what goes on and to raise their voice to the world about what is happening. Women are very active in Nabi Saleh and besides using their cameras (“their weapons” as they put it), they are travelling abroad to spread the word about their village and about their resistance.

Ahed Tamini is a 14-year-old Palestinian girl who lives in the village of Nabi Saleh, in the occupied Palestinian territories. Ahed is in the ninth grade and is a passionate lover of football and an unconditional fan of Neymar Jr (a Brazilian professional footballer)– she and her cousin Jana baked him a strawberry cake for his birthday.Two years ago Ahed stood up to Israeli soldiers, shaking her fist at one of them after she learned they had arrested her brother.

Despite the difficulties of leading a normal life in Nabi Saleh, children like Ahed still go to school, love football and play videogames. People have Facebook accounts to connect to the outside world, and on Friday evening’s families gather around the table for dinner and enjoy themselves watching TV shows together. And this is how they manage to continue with their daily lives.

The work of MSF in Nabi Saleh

Jumana Abu Oxa is a Médecins Sans Frontières (MSF) clinical psychologist who has worked in the village.

The people of Nabi Saleh welcomed me into their village, homes and school in a warm and friendly way that makes you see the goodness of these people, and the positive way they approach life despite the difficulties they face on a daily basis due to the occupation. The villagers suffer continual unexpected attacks by the military and settlers, leaving them in a state of alert 24 hours a day, and with huge uncertainty around every aspect of their lives.

The fact that the military can invade the village and enter the houses at any time terrorizes the people and has a big effect, mainly on the children, on their concentration, sleep and school achievements. Many children suffer from nightmares, anxiety and a lot of stress. Parents of some of the kids have told us they receive random phone calls from the military saying they will arrest them, with no date or time, so they go to sleep with their clothes on, their shoes and ID card next to their bed because the arrests normally happen after 1am; this way they would be ready.

There is a lack of certainty about the future, and this affects the way the new generation develops, because they see their friends get shot, arrested, beaten, and jailed for years, and they always expect that they will be next. When you cannot see a future, you will not make an effort to study, develop yourself or see that the world has a lot of good things to offer, because in yours it doesn’t.

In most contexts, victims suffer from a certain trauma or abuse for a certain period of time, and then it’s over. However, in this village, the attacks, the injuries, and the terrorising have been going on for years. One positive factor that is helping the people to keep on going is the social structure of the Palestinian society in general, and particularly in Nabi Saleh.

All the people belong to the same big family that provides a safety net of support, compaction and understanding for each and every member of the community who goes through a traumatic event. No one is left alone. Such a support network enables the people to carry on with their daily lives, and try to aspire to a normal one.

Find out more about MSF's work in the Occupies Palestinian Territory