In the Al-Awda hospital paediatric unit in northern Gaza, Mohammed Aboud, a father of five, comforts his four-year-old daughter Hala as she slowly wakes up after her surgery. The scene is all too familiar to Mohammed now. Over the last few weeks, Hala has already been operated on five times.

"Gaza’s overloaded healthcare system had no capacity to offer her"

On 14 July 2021, Mohammed was praying in his house in Beit Lahia, a neighbourhood north of Gaza city, when he suddenly heard his daughter screaming.

He rushed outside but Hala was nowhere to be seen.

She had crossed the road in front of her house and been hit by a car. 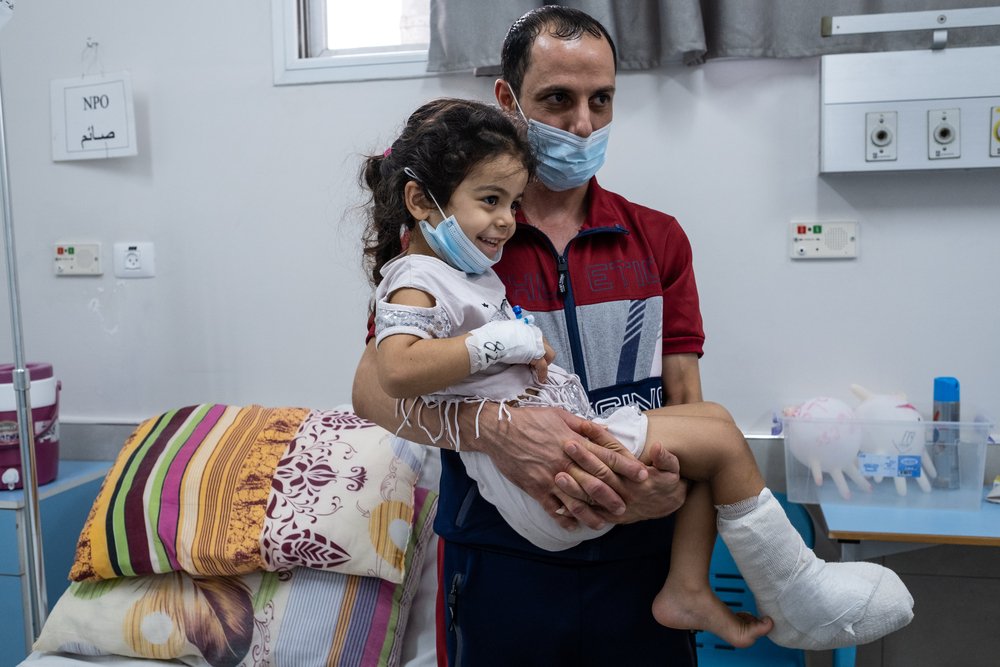 Virginie Nguyen Hoang
“When I started crossing the street, I saw a light. Then a yellow car hit me and suddenly I was in so much pain,” says four-year-old Hala, as she recalls the day of her accident.

A neighbour who witnessed the accident told Mohammed that Hala had been taken to a hospital and gave him the phone number of the driver.

The facility that received Hala was already overcrowded and lacked the necessary medication to treat her. 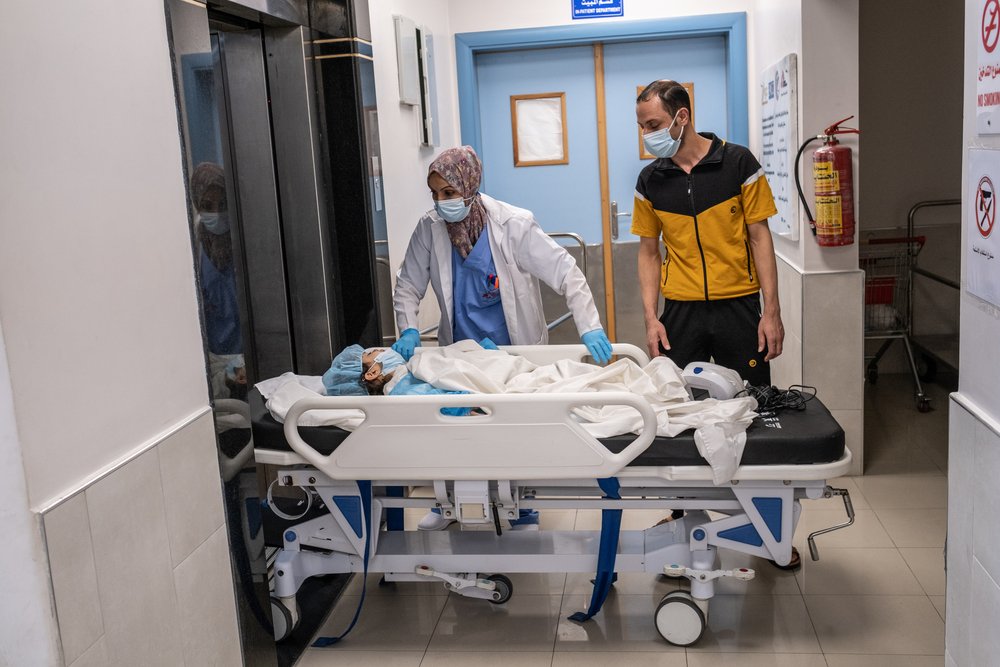 Virginie Nguyen Hoang
Mohammed Aboud, a father of five, follows his four-year-old daughter Hala as she is transferred to her hospital room at Al-Awda hospital from the limb reconstruction unit operating theatre.

Her wound was complex and had started to get infected.

She needed treatment that Gaza’s under-resourced and overloaded healthcare system had no capacity to offer her.

Instead, Hala was referred to a specialist limb reconstruction unit run by Médecins Sans Frontières/Doctors Without Borders (MSF) at Al-Awda hospital. 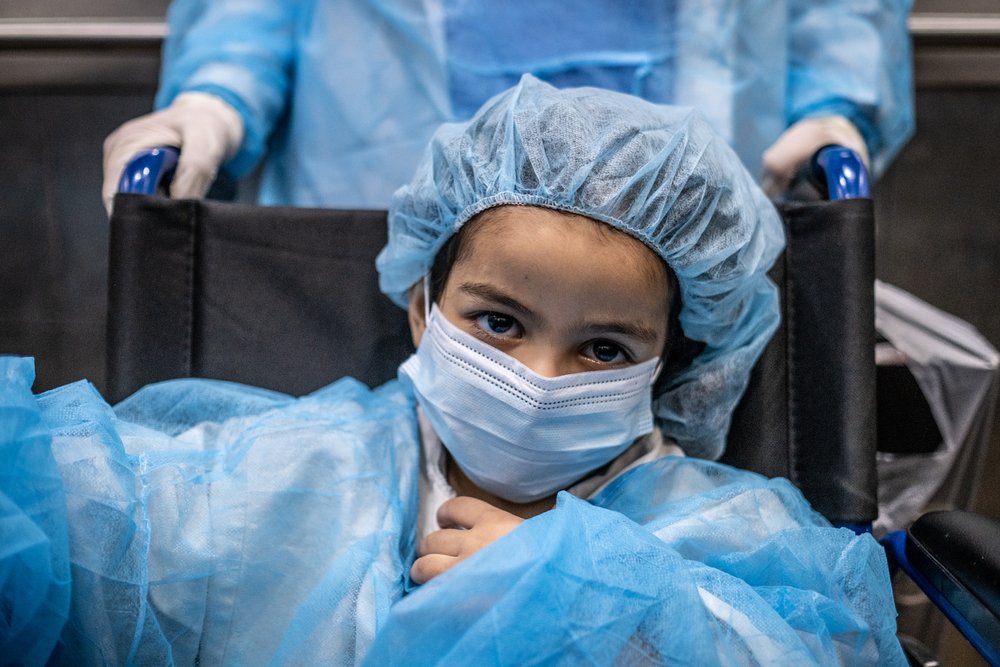 Virginie Nguyen Hoang
A 4-year-old Hala, Inside the MSF limb reconstruction unit at Al-Awda hospital, four-year-old Hala is taken to the operating theatre for her fifth surgery, since the car accident that crushed her foot on 14 July 2021.

Since June 2020, the MSF unit at Al-Awda has treated children with acute trauma cases referred to it from hospitals run by the Ministry of Health.

"So far, 234 children have received specialised limb care in the unit" 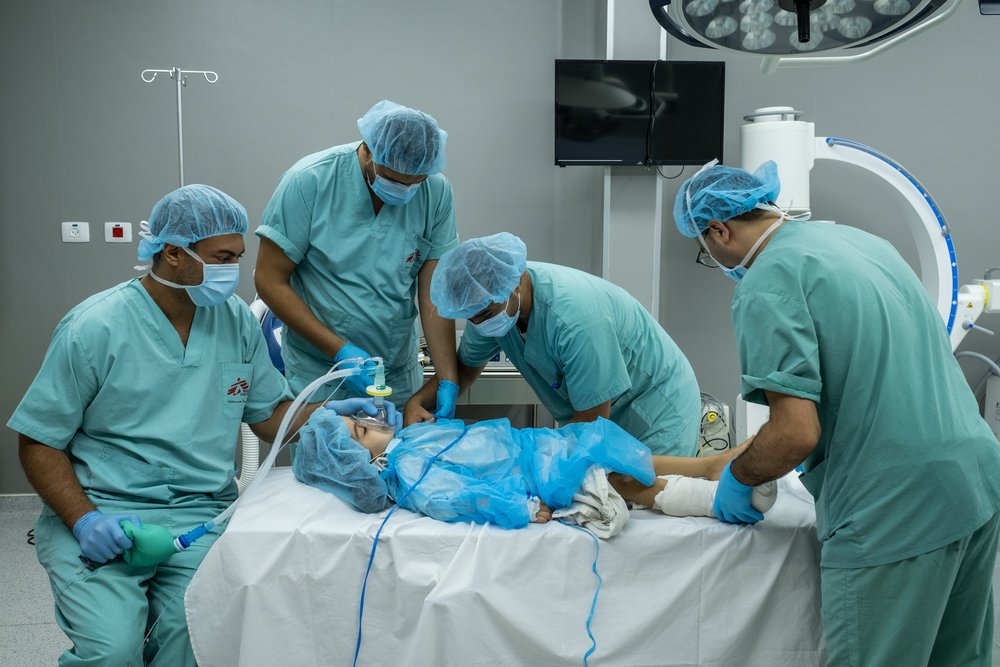 Virginie Nguyen Hoang
Inside the Al-Awda hospital operating theatre, the MSF limb reconstruction unit anaesthetist puts four-year-old Hala to sleep so the surgeon can clean her wound on her foot and install a vacuum closure device that will help it heal faster.

The goal of these referrals is to relieve the pressure being put on the public hospitals, which have struggled to cover regular surgical needs since the COVID-19 pandemic reached Gaza.

So far, 234 children have received specialised limb care in the unit.

When Mohammed arrived at Al-Awda, he was informed by doctors that Hala’s right foot had been crushed when the car ran her over. 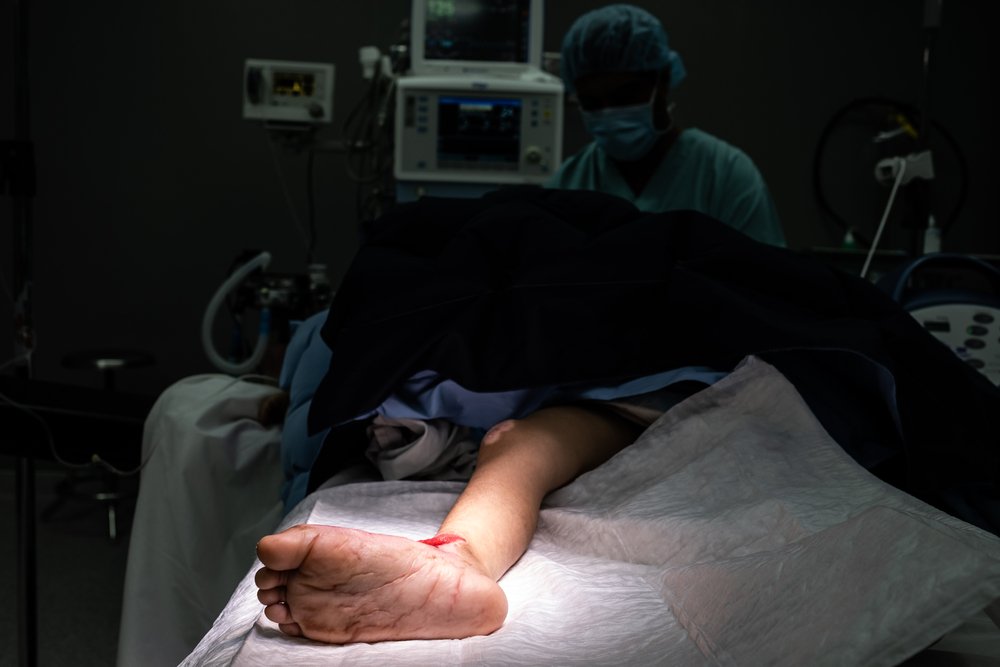 Virginie Nguyen Hoang
Injuries like the one Hala sustained to her foot are complex and require treatment that Gaza’s under-resourced and overloaded healthcare system often has no capacity to offer.

“When I saw her, I was shocked,” he says. “I hadn’t imagined her injury would be that bad.”

Large open wounds like Hala’s are prone to infections. 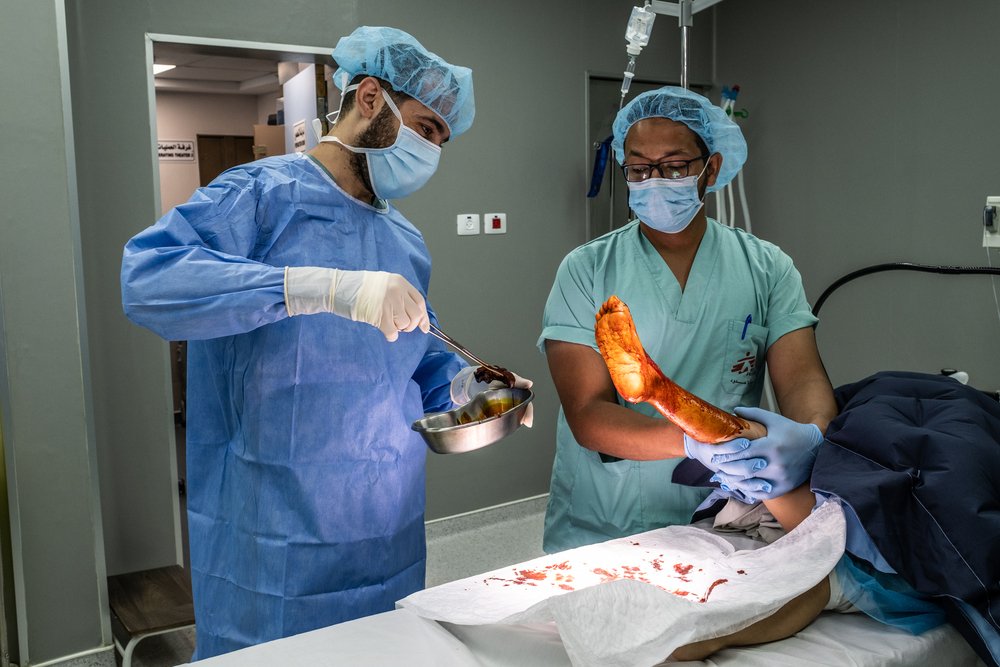 Virginie Nguyen Hoang
Injuries like the one Hala sustained to her foot are complex and require treatment that Gaza’s under-resourced and overloaded healthcare system often has no capacity to offer.

“We cleaned the wound and took bone and tissue samples to determine what infection she was suffering from. This allowed us to prescribe the correct type and dosage of antibiotics."

"Next, we used a procedure called vacuum-assisted closure to close up the wound and help it heal faster."

"Now, our goal is to treat the infection and to avoid any further contamination before we can apply a skin graft on her foot. It’s a long process and will require several procedures.” 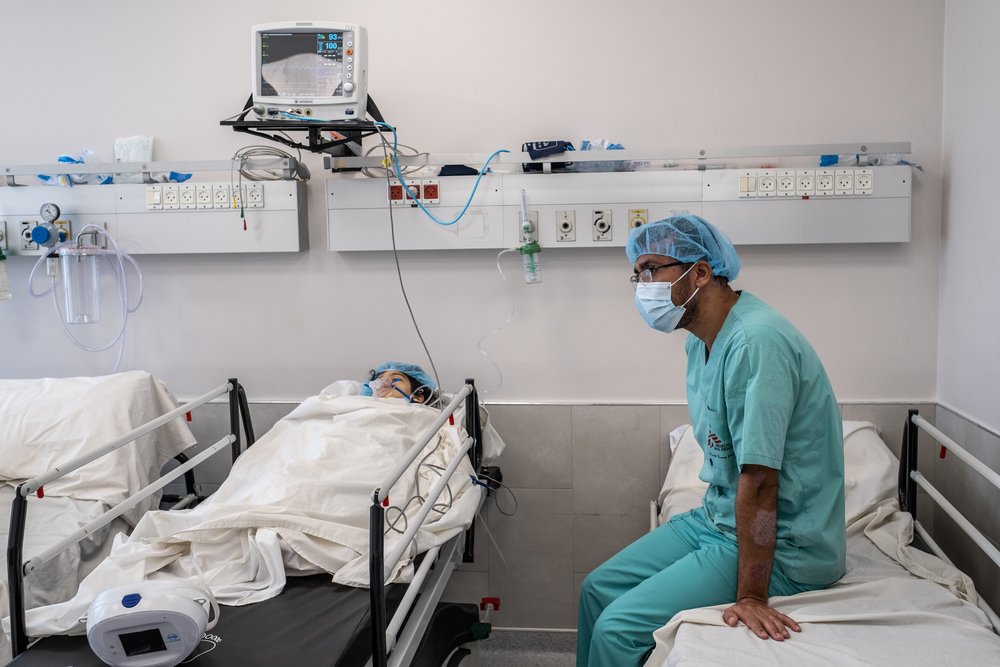 Virginie Nguyen Hoang
A nurse sits with four-year-old Hala in the Al-Awda hospital limb reconstruction unit recovery room, monitoring her vital signs as she wakes from having surgery on her foot, which was badly damaged in a car accident.

Dr Khossa confirms that her wound was particularly severe.

“Each change of dressings needs to be done in an operating theatre under anaesthesia.”

"Antibiotic resistance in Gaza is widespread"

While bone infections can be treated with antibiotics, antibiotic resistance in Gaza is widespread.

This is due to misuse of antibiotics and their accessibility without prescription in the local markets.

In 2019, MSF worked with the Ministry of Health to establish a microbiology laboratory, which allows clinical teams to determine the exact type of bacteria causing the infection and which antibiotics it is resistant to. 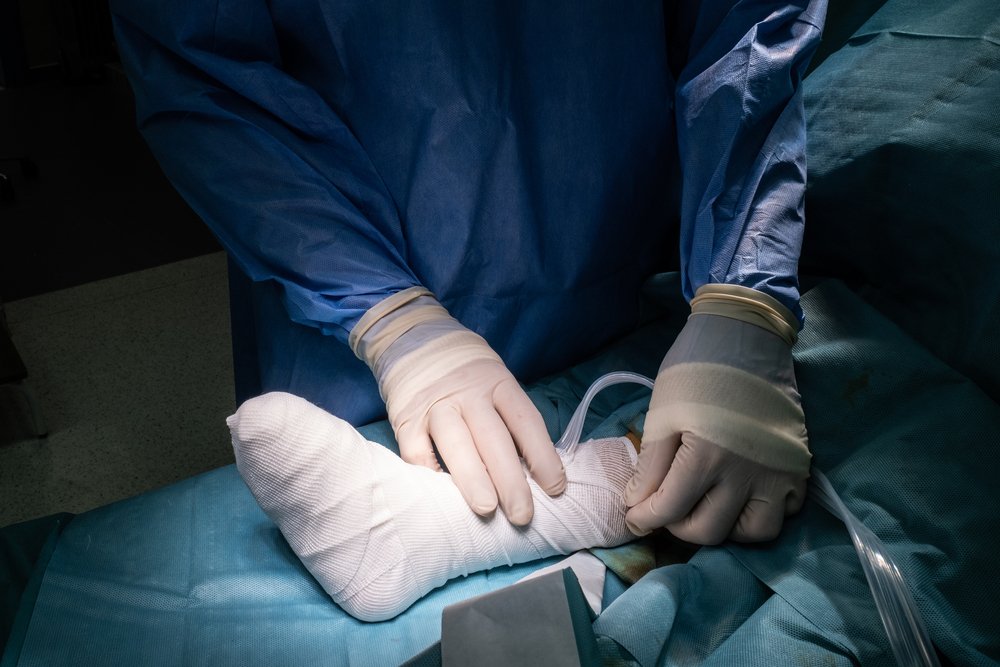 Virginie Nguyen Hoang
Following a successful surgery at the Al-Awda hospital limb reconstruction unit, a vacuum-assisted closure device is fitted by an MSF surgeon to four-year-old Hala’s foot. She was injured in a car accident and has needed multiple surgeries.

Alongside this, MSF is also helping healthcare staff understand and improve antibiotic prescribing and use.

"The approach of the medical team at Al-Awda hospital is holistic and focuses not only on the medical treatment of the patient such as surgical treatment, physiotherapy and pain management, but also on supporting their caretakers, most often a close relative" 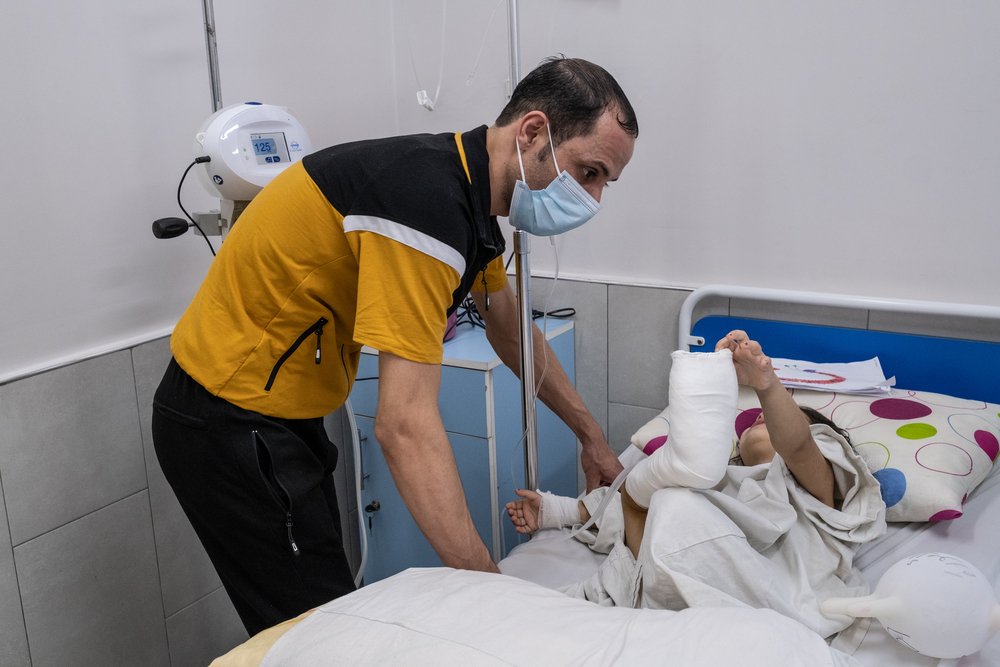 Virginie Nguyen Hoang
Mohammed Aboud comforts his four-year-old daughter Hala as she recovers from reconstructive surgery on her foot.

The approach of the medical team at Al-Awda hospital is holistic and focuses not only on the medical treatment of the patient such as surgical treatment, physiotherapy and pain management, but also on supporting their caretakers, most often a close relative.

A mental health counsellor meets regularly with Hala and her family to help them heal from this traumatic experience, ensuring she has the best chance of recovery.

This approach and such specialised treatment are rare in Gaza, as most humanitarian funds and efforts are directed towards emergency responses, to treat conflict-related trauma injuries or, more recently, towards the COVID-19 response. 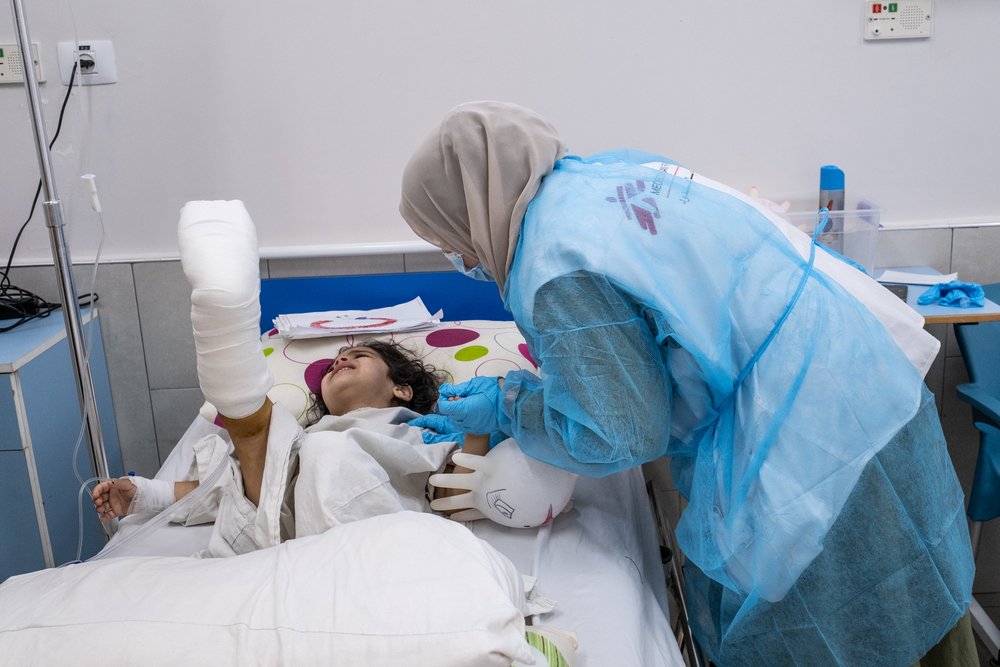 Virginie Nguyen Hoang
A nurse comforts four-year-old Hala as she recovers from reconstructive surgery on her foot. The surgery was performed by the MSF limb reconstruction unit.

Consequently, other health needs, such as paediatric trauma care, are often deprioritised.

A long road to recovery

Within paediatric care priority is given to acute trauma cases like Hala’s, and children with chronic problems stemming from old burns and traumas or congenital conditions must often wait a long time for treatment. 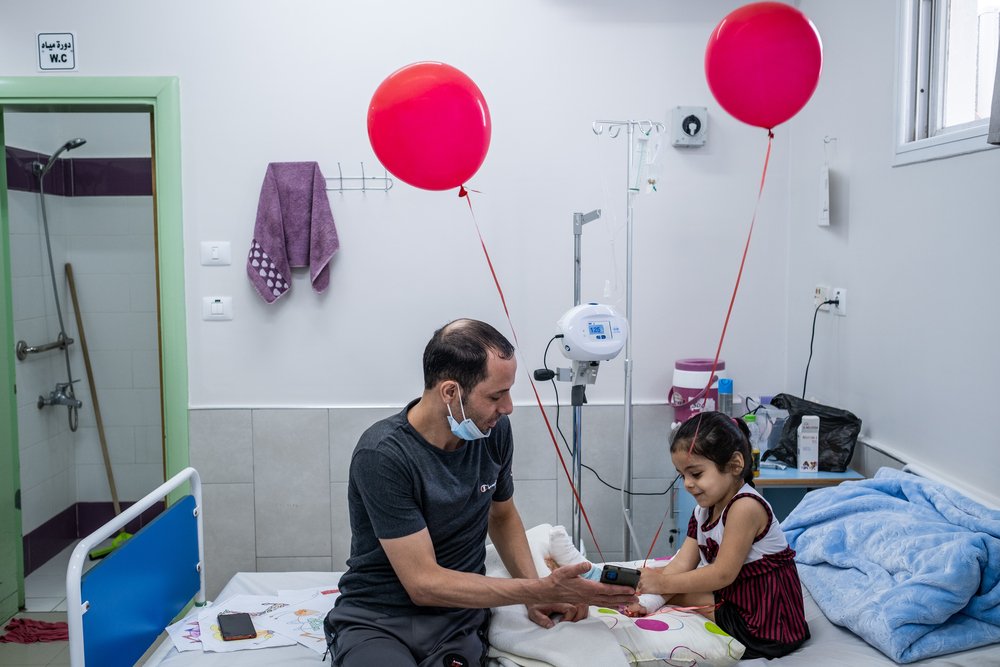 Virginie Nguyen Hoang
Four-year-old Hala laughs as she speaks to her mother and sisters, a day after surgeons with the MSF limb reconstruction unit at Al-Awda hospital operated on her foot.

“MSF was already treating trauma patients, but to relieve the pressure on healthcare facilities, it extended its patient admission criteria and began seeing patients with chronic issues stemming from old burns and traumas, with many in paediatrics,” explains Benoit Vasseur, MSF head of mission in Gaza.

A month after her arrival at Al-Awda hospital, Hala’s foot is starting to heal and she is now ready for a skin graft. 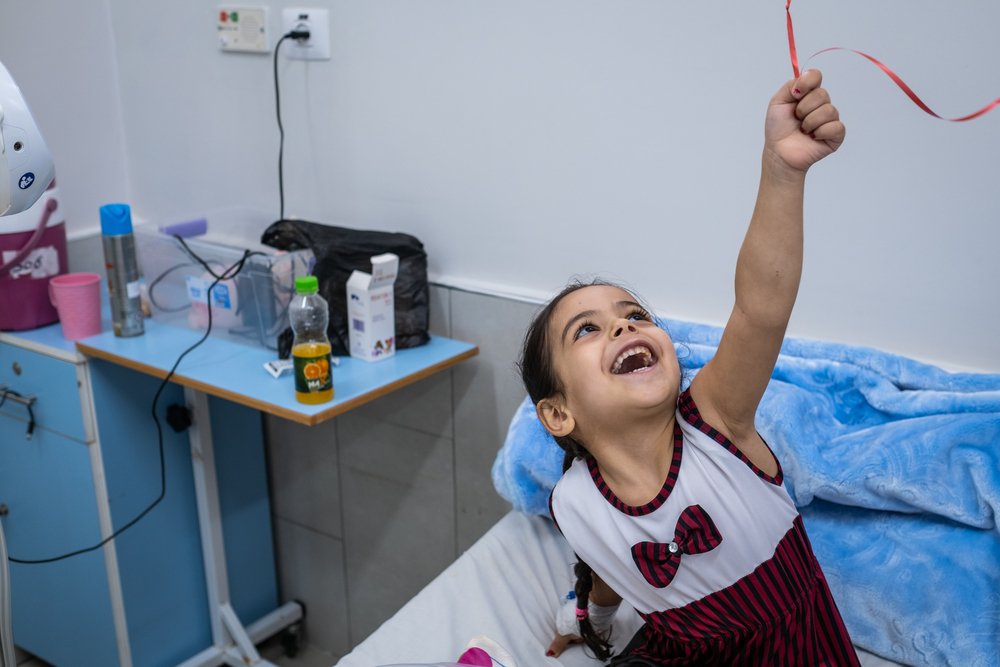 Virginie Nguyen Hoang
Four-year-old Hala plays with a balloon a day after surgeons with the MSF limb reconstruction unit at Al-Awda hospital operated on her foot.

The road to recovery is still long, but Mohammed is happy to see his daughter getting better.

If everything goes well, Hala should be able to leave the hospital in the coming weeks. 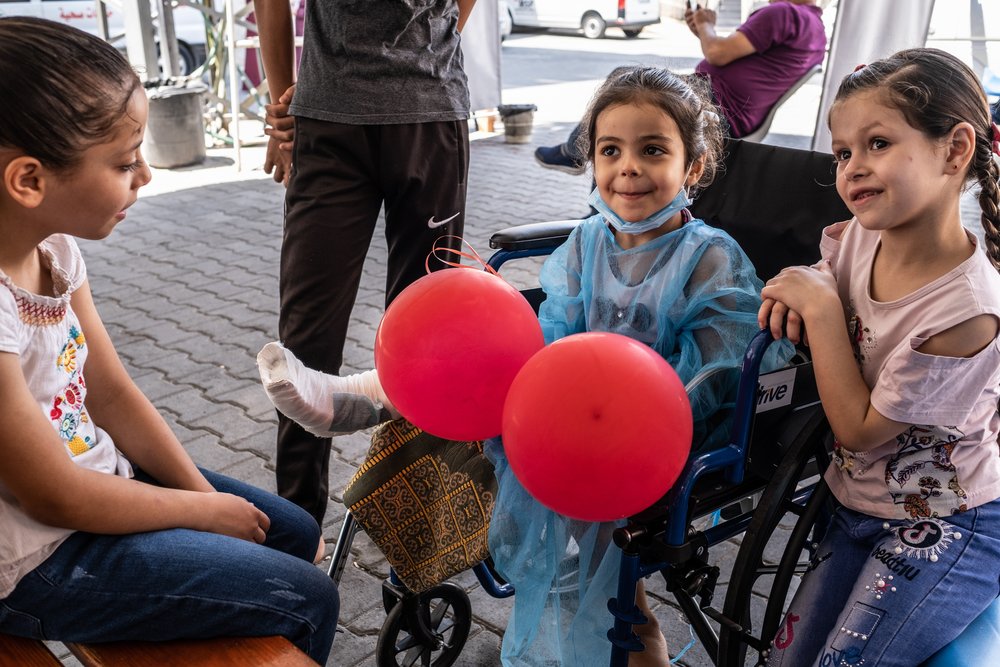 Virginie Nguyen Hoang
Four-year-old Hala is visited by her sisters and cousin at Al-Awda hospital, a day after surgeons with the MSF limb reconstruction unit operated on her foot.

She will still have to take antibiotics for a while to treat the infection, but will be able to be with her family, who have been waiting impatiently for her to finally come home.