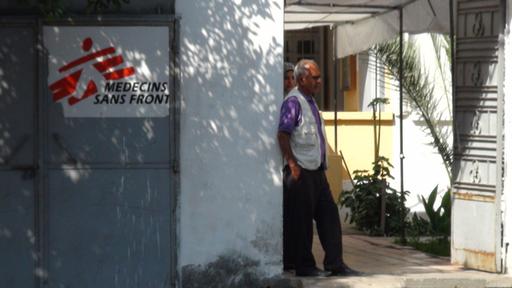 An initial medical team made of two MSF staff and the programme coordinator was able to enter the Gaza Strip on 18 November. Additional emergency response staff, such as anaesthetists, resuscitation specialists and surgeons, will be joining the team in the coming days.

MSF’s inflatable hospital could be converted to function as a triage centre (prioritising patient needs) and an operating theatre for minor surgery. The hospital, set up in 2011 within Nasser hospital, in Khan Younis, in the south of the Gaza Strip, has until now been used for our specialised surgery programmes.*

Forty Palestinian staff are working for MSF in the Gaza Strip. Two nurses and two physiotherapists are working at the MSF dispensary in Gaza town. However, only five patients have been able to get to the dispensary for treatment over the past six days because of insecurity. MSF is planning to increase the dispensary’s capacity so that it can care for patients discharged from hospital.

We are in the process of evaluating the situation in the hospitals of the Gaza Strip, in order to determine what support is needed. Given that Gaza’s surgical teams are very experienced in war and emergency surgery, MSF is more likely to support intensive and postoperative care.

“This new offensive is making an already very fragile humanitarian and public health situation much worse. MSF has been regularly denouncing the politicisation of the Palestinian health system and the impact of the double conflict – Israeli and Palestinian and between Palestinian groups – since 2006. The population is suffering from years of conflict, from a lack of access to certain kinds of healthcare and from shortages of medicines and other medical supplies”, noted Virginie Mathieu, MSF’s head of mission for Occupied Palestinian Territory.

MSF has been working in Occupied Palestinian Territory since 1989 and in the Gaza Strip since 2000.* In July 2010, MSF signed an agreement with the public health authorities in Gaza and opened a reconstructive surgery programme. Several times a year, MSF teams of surgeons, operating theatre nurses and anaesthetists carry out specialist surgical programmes. These teams work in close collaboration with surgeons and other staff from Nasser hospital in Khan Younis, in the south of the Gaza Strip.