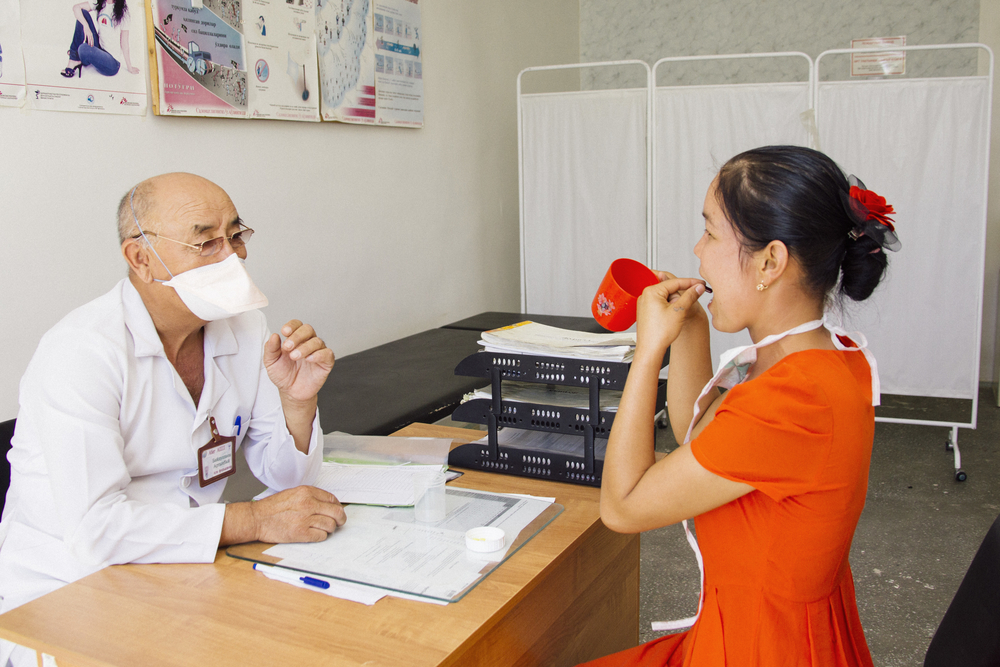 Birgitta Gleeson, an Irish Biomedical scientist, blogs about her experience working in Uzbekistan…

For the past four months I have been working as a manager in a tuberculosis hospital laboratory in Nukus in the Republic of Karakalpakstan, Uzbekistan. Karakalpakstan is a semi-autonomous republic in the northwestern region of the county. Before I came to Nukus I had read about how “desolate” and “hopeless” the area is.

While it is true that Nukus is an isolated outpost in a desert and yes it is extremely cold here in the winter (-20C) and extremely hot (50C) here in the summer, I cannot describe this place as either desolate or hopeless.

There are apricot trees and grape vines growing in nearly every garden here in Nukus and now the bazaar is full of strawberries, watermelons, chillies and cherries. Every evening under a pink and purple sunset sky,  there are grazing goats and kids playing football on my street. 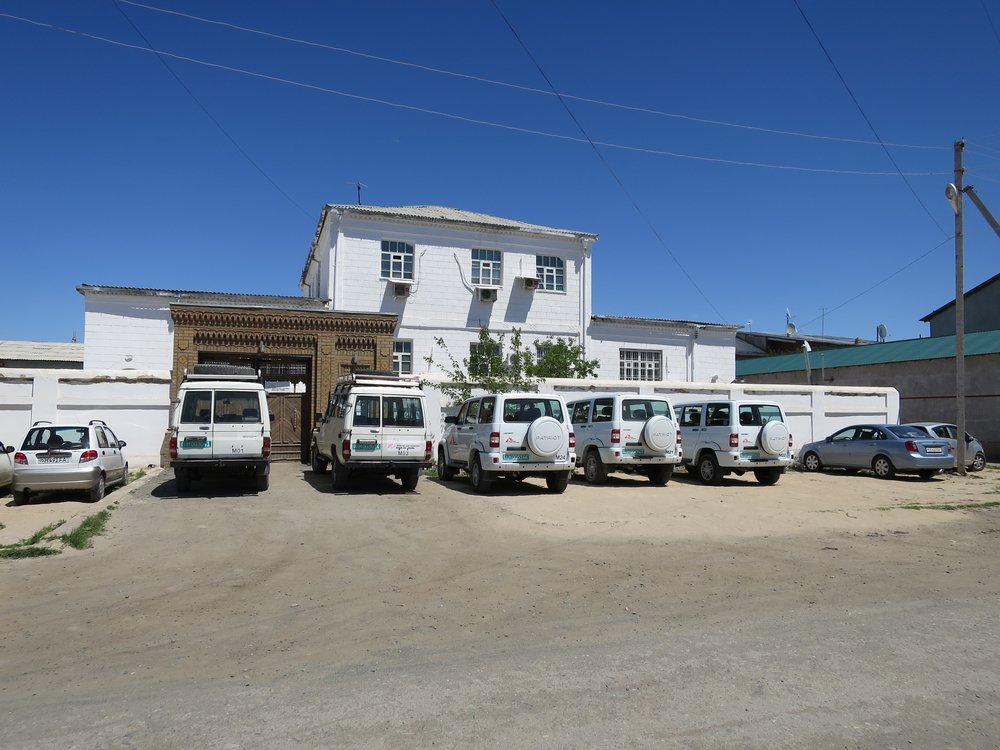 On the other hand, however, Karakalpakstan does have another less talked about side to it. In the early 1990s after the collapse of the Soviet Union and its health system, TB numbers in the Former Soviet Republics began to soar.

Despite significant efforts, recent figures from the region show that a substantial number of both new cases and re-treatment cases are now multi drug resistant, meaning that drug resistance remains a problem in Karakalpakstan.

“Every day coming to and from the lab I can see patients looking out their bedroom windows or even outside playing fuss boll. I use this as a constant reminder of the importance of the work we do here.”

MSF has been working in Karakalpakstan since 1998 and today, along with the Ministry of Health, run a comprehensive TB healthcare programme and a world-leading TB clinical trial (TB-PRACTECAL). There are currently around 2,000 drug-sensitive and drug-resistant patients receiving treatment for TB under this comprehensive care programme.

Having MDR-TB means that the infection is resistant to two of the most important available TB drugs, rifampicin and isoniazid. Until recently, these drugs were working well in treating TB, but today, in an increasing number of cases, their effects are no longer sufficient to kill the Mycobacteria.

The majority of MDR-TB cases are a result of improper prescribing practices and/or poor adherence to prescribed treatment regimes. This incorrect use of antibiotics places selective pressure on the colonizing bacteria. It takes just one bacterium to become resistant to an antibiotic for MDR-TB to occur. This single resistant bacterium multiplies and over time a drug-resistant population will replace the treatable drug-sensitive population. When MDR-TB happens this way it is known as acquired MDR-TB. Acquired MDR-TB is completely preventable. It is more a cause for concern when high numbers of first case infections are observed as this means that MDT-TB is spreading from one person to another.

Treating MDR-TB is also not easy. It requires long arduous multi-drug regimens. Many of the drugs for treating MDR-TB are expensive and many of the drugs currently available have significant side effects. Understanding a patient’s drug resistance profile is becoming increasingly more important for the successful treatment of TB patients. This is where the laboratory in Nukus is making a profound difference for TB patients in the region. 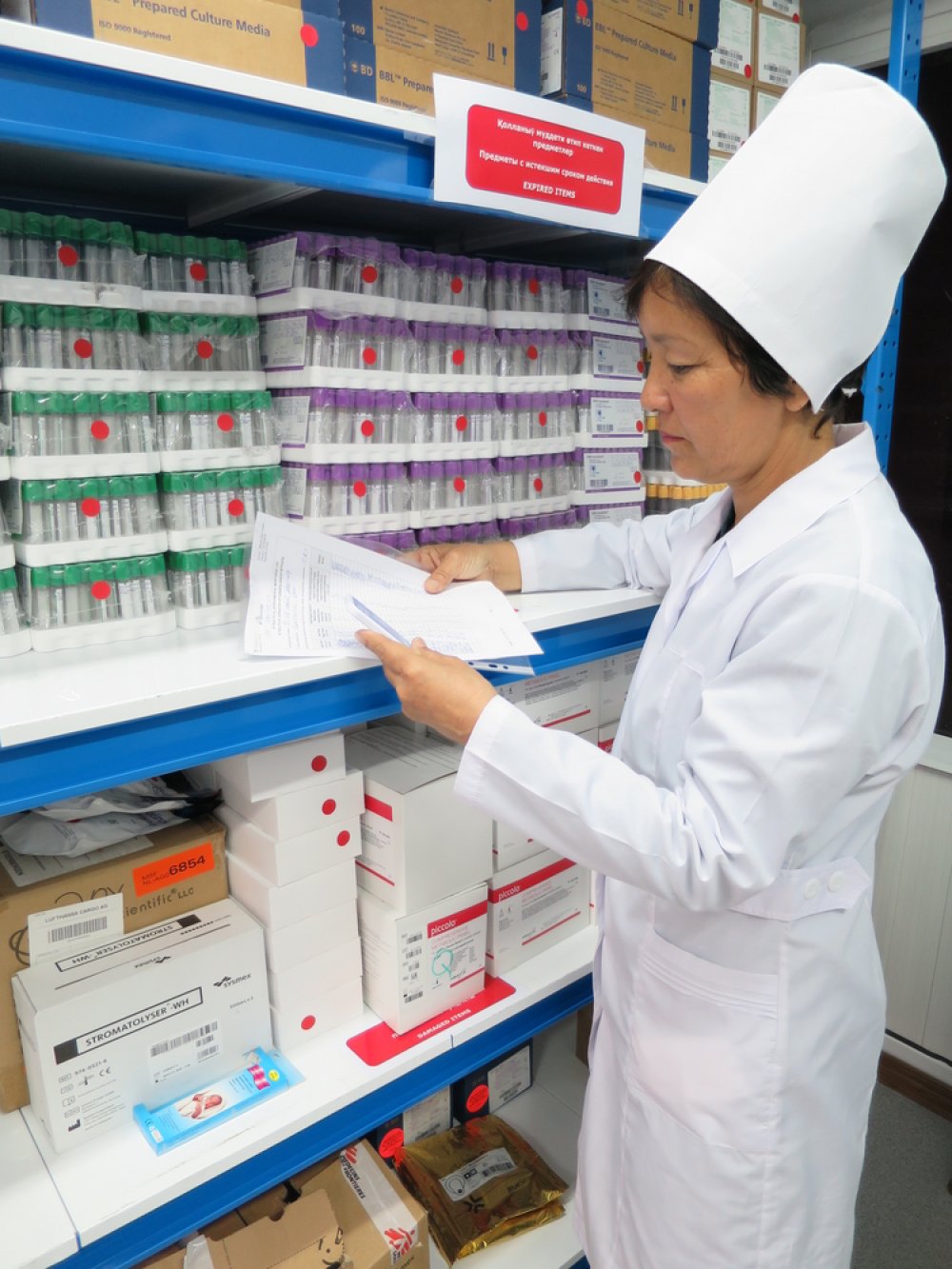 Amelia Freelander/MSF
A Nurse examines medications in the storeroom at the TB Practecal Warehouse in Nukus, Uzbekistan.

Sometimes working in a hospital lab you can feel a bit disconnected from the patients that you are diagnosing. In the lab in here in Nukus, however, it is hard not to forget. The lab is situated on the grounds of the TB 1 hospital and just outside my office window is the paediatric ward. Every day coming to and from the lab I can see patients looking out their bedroom windows or even outside playing fuss boll. I use this as a constant reminder of the importance of the work we do here.  I think it is important to remember that the person looking down the microscope is usually the first person to know if a patient has TB or not.

In fact, the lab here in Nukus has the capacity to give an initial diagnosis of TB within a couple of hours and is considered to be one of the most advanced TB labs in the whole of Central Asia, comparable to any of the TB reference labs in Europe. Diagnosing tuberculosis resistance is complex and involves concerted effort involving many steps and many people. It takes a team of 57 MSF and MOH staff to carry out the work that we do here and none of the work would be possible without the commitment of the whole team. The complexity of the system requires that the processes and procedures are performed are controlled and performed correctly.

The core function of the Nukus labs is firstly to diagnose if a patient is infected by TB. If the patient has a positive result, we then perform a drug sensitivity testing (DST). DST is critical in order to be able to establish if a patient is resistant and if so, what drugs the patient is resistant to. Critical treatment decisions are based on these diagnostic results and the results can have a significant impact on a person’s life with the treatment in some cases lasting up to two years. My job is to ensure that the clinical team and the patient can trust the accuracy and the reliability of the test coming from the lab.

In 2016 two new drugs were recommended by the WHO for the treatment of MDR-TB, Bedaquiline and Delamanid.  These two drugs are the only new class of TB drugs to be developed in over 40 years and are the only option for patients when all other drugs have failed.

Since their introduction in 2016 over 340 MDR-TB patients have successfully started TB treatment using these drugs in Karakalpakstan. Despite their demonstrated effectiveness recent reports have worryingly shown the emergence of both Bedaquiline and Delamanid resistance. The WHO has also recently issued a warning that the incorrect use of Bedaquiline could hasten the emergence of resistance.

Despite the rollout of these drugs, there has been a lag in the availability of DST for these drugs. This delay is mainly due to global restrictions on the accessibility of the pure compounds. In the next few months however our lab will roll out routine DST for these drugs here in Nukus. This will allow us, for the first time, to be able to establish if there is any resistance to these drugs in the region. This work is not only important for treating our patients but also on a global level to inform the surveillance and monitoring of TB resistance. These new drugs have provided options to patients who, because of resistance, have few other options. If resistance is identified outcomes for these patients will again be poor. Hopefully, this will not be the case but only time will tell.