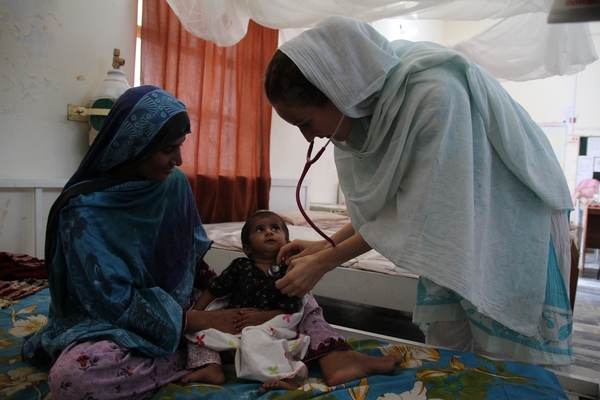 Chris Lockyear is Médecins sans Frontières Operation Manager for Afghanistan, Bangladesh, Pakistan and South Sudan. Here he explains the actions Médecins Sans Frontières have taken up to the present, and our position on the need for an impartial humanitarian response, in the earthquake-hit area of Awaran, Pakistan.

On the afternoon of September 24th, I watched the news unfolding. Houses flattened, hundreds dead and many more injured following a major earthquake in the Awaran district of Balochistan province.

Alleviating the kind of suffering brought on by conflict and natural disasters like these events is what we do; it is the very reason that Médecins Sans Frontières, as a neutral medical humanitarian association, exists.

Yet nearly four weeks after the two major earthquakes, we have not treated one patient in this area, in spite of the clear need for impartial humanitarian intervention.

But we are able to offer immediate lifesaving trauma care, nutritional support, preventative primary healthcare and assistance with water, sanitation and shelter provision; most importantly, we are able to do it impartially.

Having worked in Balochistan for many years, we are well aware of the sensitivities of operating there. But we are not invested in the political dynamics in the province, their history or their outcomes.

Médecins Sans Frontières is not aligned to any government or political party, and seeks simply to provide humanitarian assistance to people when they require it.

To run our programmes in Pakistan, we accept funds only from private individuals, rather than institutions or governments — an imperative in a country where aid is consistently subject to manipulation. We do this to be able to provide medical care in this country, as in others, based on people’s needs and nothing else.

Médecins Sans Frontières was ready to provide this kind of impartial medical assistance in Awaran.

In light of the attacks on the helicopters of the National Disaster Management Authority and on the convoys of the Ministry of Health in the days following the earthquake, we had to think carefully about entering the area.

But just as we do in every other insecure location, from Afghanistan to the Democratic Republic of Congo, we would need to be guaranteed a basic level of safety before going in. We prepared ourselves to go to Awaran because we felt that, if we got these guarantees, we could go safely.

But in the end, we weren’t able to make a decision as to whether or not we should enter — it was decided for us. In Pakistan, the government’s approval is clear in the form of the granting of no-objection certificates (NOCs), and we work daily within the parameters of this system to keep our existing programmes in Balochistan going.

However, despite an official request for assistance on Oct 1st, 2013 and multiple meetings with different authorities at the provincial and national levels, an NOC for Awaran never materialised.

Our efforts came to an end when, just days later, our requests for authorisation were definitively denied.

I find it shocking that our help should be turned away so hastily. This is especially the case given that the authorities were so willing to facilitate our response after the Kashmir quake of 2005, in 2008 in Ziarat, and on multiple occasions for floods in eastern Balochistan, most notably in 2010.

Why should Awaran be any different?

Dr Franziska Goettle (right) examines a malnourished child in the inpatient therapeutic feeding centre in the Dera Murad Jamali District Headquarter Hospital in eastern Balochistan, Pakistan. Pakistan 2012 © P.K. Lee/MSF
Pakistan 2012 © P.K. Lee/MSF
The disastrous humanitarian situation we were hearing about days ago — broken limbs, ruptured wells, mothers keeping their children alive on dates and sugar water alone — how could it have been resolved so quickly? Especially considering the contradictory messages we received from various authorities.

For us — an association that puts the needs of our patients above all else — knowing there are people whose needs are unmet is incredibly difficult. The only thing worse, I think, is not knowing for sure, which is the situation we’ve found ourselves in.

If there are people out there in Awaran and Kech who have not received aid nearly four weeks after the first quake, I can only imagine their suffering.

Following disasters like this we would normally see shortages of food, causing children and mothers to become malnourished; people sleeping in makeshift shelters, making them more vulnerable to pneumonia and malaria; and lack of clean water and sanitation increasing the risk of diarrhoea. Not to mention infection caused by untreated wounds.

Our help has been declined. So do we pack our bags and go home? Not quite.

Admittedly, we have had to stand down our team in Uthal, even though we are still receiving reports of devastation, a community destroyed by both earthquakes and insecurity, and huge gaps in healthcare and provision of relief as a result.

We’re still determined to go, to provide direct medical treatment while the needs persist — and we’re willing to talk to all parties to negotiate this access.

In the meantime, we remain committed to providing impartial medical humanitarian assistance elsewhere in Balochistan and in other parts of Pakistan.

This op-ed was first published on Dawn.com on 21st October 2013.

Médecins Sans Frontières is a medical humanitarian association independent of any political or military groups, providing free emergency medical assistance to people in need in approximately 65 countries around the world.

In other parts of Pakistan, Médecins Sans Frontières teams are providing primary and secondary healthcare to people affected by armed conflict and a lack of access to medical care.

Médecins Sans Frontières relies solely on private financial contributions from individuals around the world and does not accept funding from any government, donor agency, military or politically-affiliated group for its activities in Pakistan.