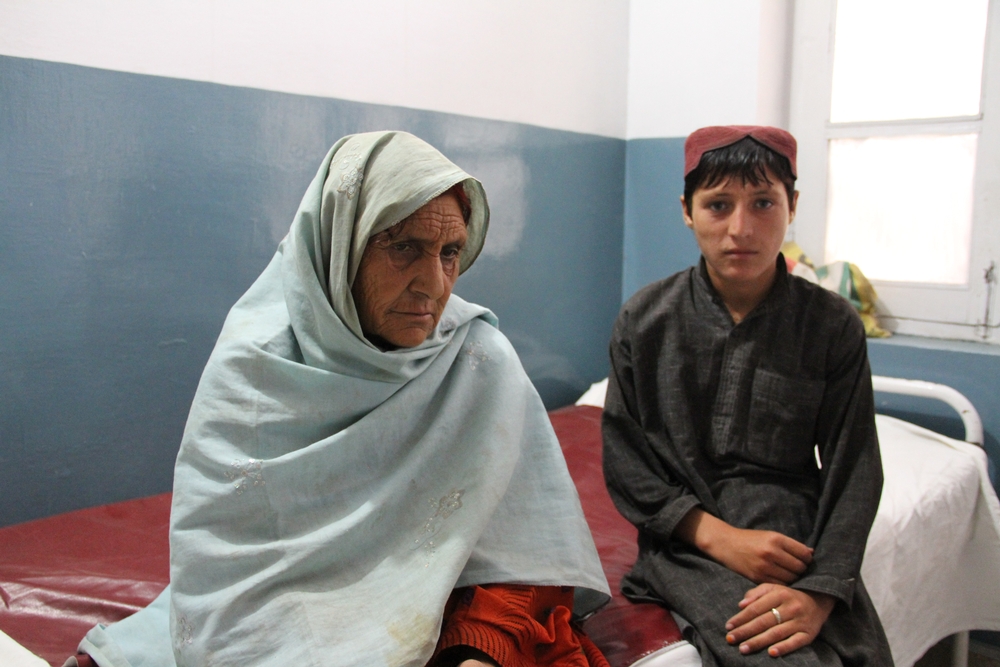 Pakistan: "No place to call home"

“Home is a precious place. I would give anything to return to mine,” says 65-year-old Gul Bibi, as she gently rocks back and forth on a bed at the hospital set up by Médecins Sans Frontières/Doctors Without Borders (MSF) in Sadda, the second-largest town in Kurram Agency, Federally Administered Tribal Areas (FATA).

The hospital for internally displaced persons is full of women who have babies and children in their arms or sleeping by their feet.  It is hard to tell the children’s ages since most of them are malnourished and look much younger than their years. Most of the children are between the ages of six months and five years and are being treated for measles and dehydration.

The parents have to travel long distances to receive the required medical treatment as the on-going violence in the province, especially in militancy-hit areas such as Kurram Agency, has taken a strong toll on the healthcare infrastructure in the region.

MSF pharmacy at the Sadda Tehsil Headquarters Hospital, Lower Kurram Agency, FATA, is visited by a large number of people every day.

The other side of war

So far this year, MSF has treated 213 children for complicated measles at its hospital in Sadda, which specialises in children’s healthcare. In most of the cases, the children had developed pneumonia and meningitis and needed urgent medical care.

“What is upsetting is that so many of the conditions we see here are preventable,” says Dr Rahman Sakhi, one of the senior doctors at MSF who sees dozens of such cases every month. “The community is suffering unnecessarily because of the militarisation in the area.” 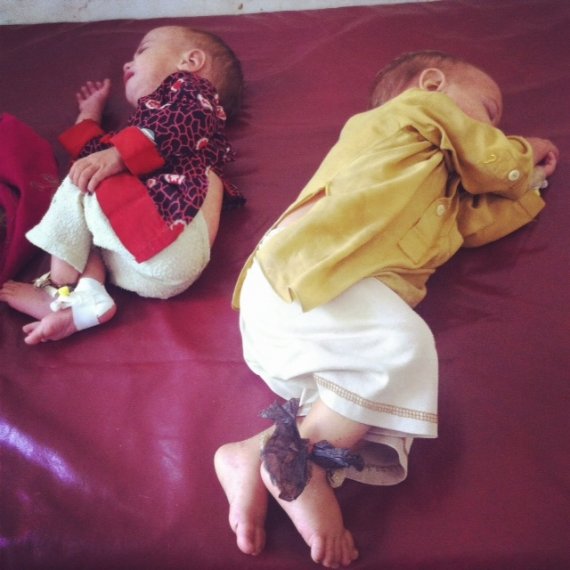 Since health workers’ access to the community is restricted, diseases are magnified and the patient ends up facing a lot more pain that could have be prevented if things like measles are tackled in the initial stages.

More than 175 health facilities and 500 schools have been targeted and destroyed by militants across FATA since 9/11, according to Nizam Khan Dawar, a human rights specialist and CEO of the Tribal Development Network, a network of local organisations working for peace and development in the province.

“Even in war zones, hospitals and schools should be neutral places and shouldn’t be attacked,” he says.  “The ongoing violence is weakening the health system and disproportionately impacting women and children.”

Nizam elaborates that female doctors and health workers continue to face the brunt of violence and intimidation from militant groups who question women’s right to access healthcare, especially reproductive health.

“There is a shortage of women health workers and women doctors who can provide healthcare for women,” he says. “Many are pregnant and especially vulnerable as they are displaced by ongoing military operations and fighting in the area,” he says.

A mother attends to her son at the MSF hospital in Sadda, Kurram Agency
Women doctors, nurses and health professionals continue to be targeted by militants and put under pressure to give up their work and stay inside their homes. “The threats and feeling of intimidation is increasing in many areas,” he says.

More than just a number

The Kurram Agency in Pakistan’s tribal belt sits on a political fault line, bordering the conflict-ridden areas of Khyber Pakhtunkhwa and Balochistan on its east and south respectively and also shares a border with Afghanistan on the north and west.

Since 2007, large swathes of the tribal belt became a battle ground as the conflict in neighbouring Afghanistan spilled over into Pakistan’s soil with militant groups unleashing a bloody carnage and chaos to take control of the area.

From hospitals and schools to homes and entire villages have fallen victim to this savage war, killing hundreds and displacing many others. The area was a stronghold of the Taliban until 2008 when the Pakistan Army ordered a military operation in the Agency to flush out the militants.

An uneasy calm has been established in the area for the past three years, following the end of the military operation Koh-e-Safaid, which resulted in the lower and upper subdivisions of the agency falling back under government control.

The peaceful wave, however, was shattered once again earlier this month when a school van hit a roadside bomb in Nasti Kot, Parachinar, and killed a child and the bus driver and left many others injured. Meanwhile, as the United States gear up to reduce the number of US troops in Afghanistan next month, the people in the area fear an increase in violence.

Even though the residents of Kurram Agency and other militancy-hit areas have survived death, disease and terror, their suffering remains alien to the rest of the country.

They either remain largely invisible on news channels and in newspapers, or their names, faces, daily realities and struggles are reduced to a number that either announces their death or displacement.

No country for old women

Gul Bibi, who belongs to a village in Upper Kurram, which was home to nearly 20,000 people, is one of the faces behind that number.  As she sits on a bed in the MSF hospital in Sadda, waiting for treatment for her eight-month-old granddaughter suffering from dehydration, she begins to recount her story.

“We lived in peace. We lived good lives,” she says about her life back in the village. 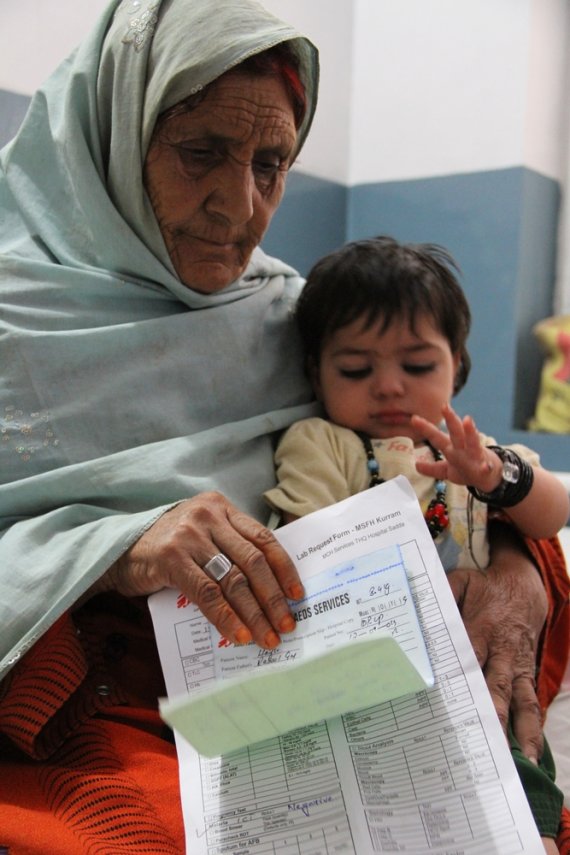 Noor Muhammad/MSF
Gul Bibi, 65, was displaced from her village in Upper Kurram Agency and has been living in Sadda as an IDP for three years

“We had a lot of food and land and we didn’t need anything. We had been blessed with a lot – our health, our children and our grandchildren.” She pauses for breath, closes her eyes and continues. “Then three years ago everything changed.

‘They’ came to the area and nothing was the same again,” she elaborates, never naming ‘them’ when referring to the militants in the area.  At first, the women were told not to leave their homes. Then people began being kidnapped for ransom.

“There was fear everywhere,” she says.

“We went from living in a happy and peaceful place where everyone knew everyone to not knowing who we could trust or who was living amongst us.” Gradually, the violence picked up momentum and the militants started burning down houses and schools.

“I still see our village burning when I close my eyes and try and sleep,” she says. “I see the village and I smell it burning.” Her voice begins to crack but she doesn’t want to take a break. She says she wants to be heard and wants people to know what she has been through.

When things showed no signs of improvement, Gul Bibi convinced her husband to leave the village. Her husband was frail and unwell at the time but they knew their options were limited. “We left with nothing but the clothes that we had on,” she says. “We walked for five hours.  I found a donkey cart on the way and asked the man to help me lift my husband on to it so that he could complete the journey.”

For the past three years, Gul Bibi has been living in a tent in a camp near the hospital. “This is not where a woman of my age should be living,” she says. “I have a home and a village and a country, yet I am living in this tent with my daughter, her children, her husband and other members of my family.”

The living conditions for the displaced population are less than ideal. Large families are cramped into small tents and are dependent on government aid or NGOs for basic necessities such as food, medicine and clothing. Poor living conditions, lack of clean drinking water, poor healthcare facilities and malnutrition has led to the death of dozens of children from curable diseases such as gastroenteritis, typhoid and respiratory infections. 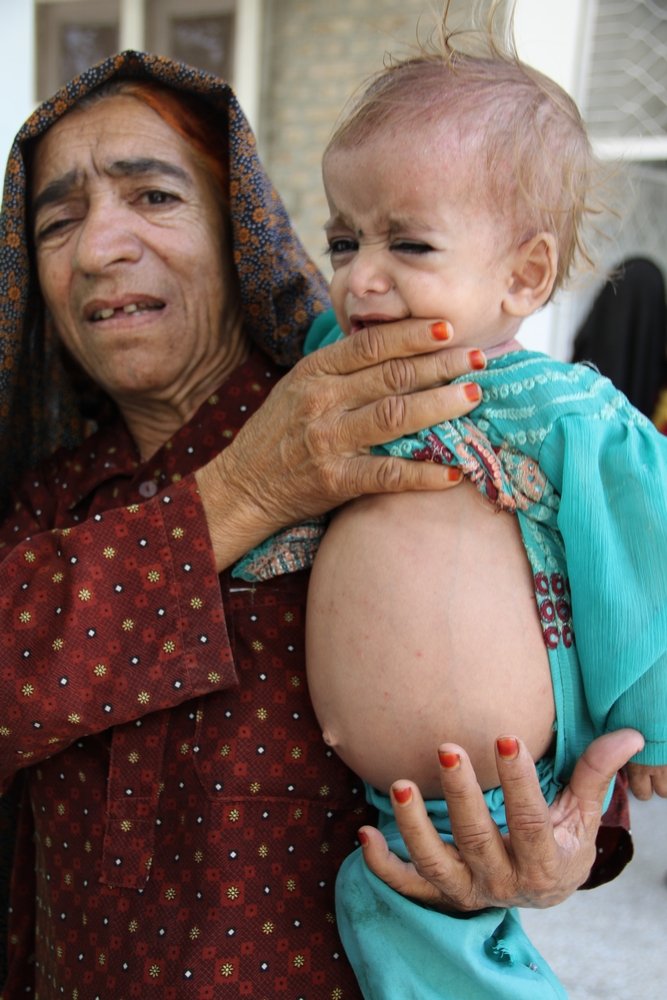 Noor Muhammad/MSF
Khalil’s eager grandmother shows him to the visitors. He is malnourished.

Amidst this chaos, Gul Bibi yearns for a safer future for her grandchildren, preferably back home. “I find it hard to sleep at night; I spend most of the night thinking about everything I’ve seen,” she says.

“I wish, I yearn to return to my village.” 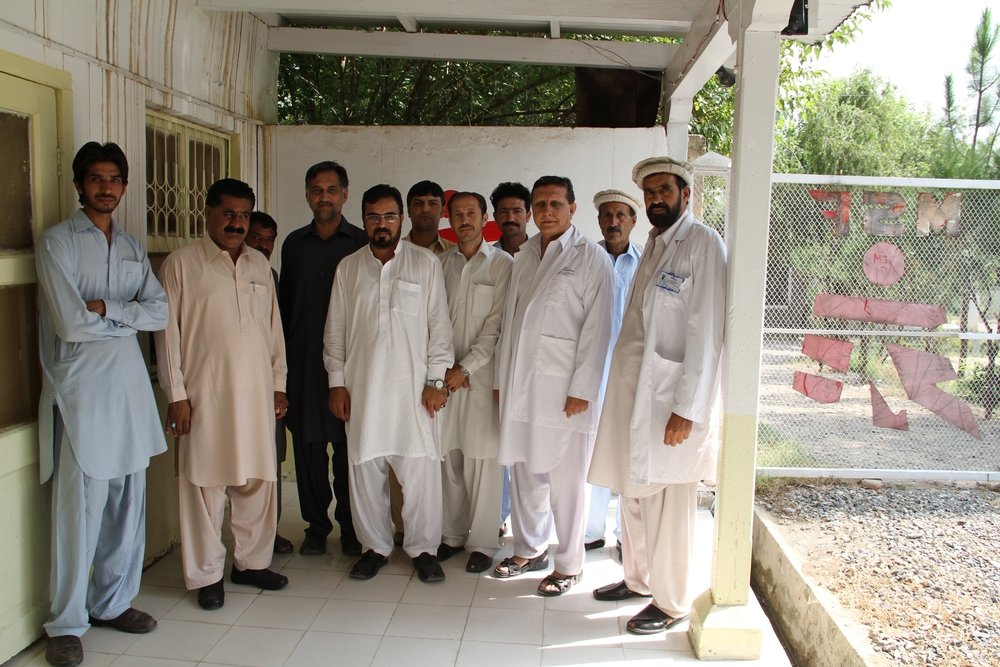 “The north western [region] of Pakistan has traditionally been victimised by sectarian violence, militarisation and mass displacement of the population because of the war on terror,” he says. “All of these factors have had a repulsive impact on the health policy and healthcare at the regional level. Health care has been militarised due to the conflict in the area and has led to a shortage of medical staff and medical supplies and there is no system in place to monitor and evaluate, strengthen and support a coherent health policy in the area."

He emphasises the need to “go back to the basics” where there is one functioning health facility for every 5,000 people and people can access medical facilities without fearing for their lives.

Even though organisations like MSF have worked to fill the vacuum in healthcare facilities in the area, a far more integrated and consistent effort is required at the provincial and national level for those whose lives have been uprooted to feel at home again.