Pakistan: People are unable to return home and major health concerns remain months after the flooding

It has been more than three months since devastating floods caused vast damage across Pakistan and displaced millions, but only in recent weeks have waters started to recede and people been able to return home. Those returning to their villages are finding destroyed houses and land, still surrounded by stagnant water. Meanwhile, those remaining in camps and informal shelters are faced with the threat of winter.

“Even after three months, the situation is an emergency.”

There are areas in the districts of Jhal Magsi, Usta Muhammad and Sohbatpur, Jaffarabad and also Naseerabad that are still inundated. In the Eastern districts of Balochistan and 11 districts of Sindh, people are living next to their flooded villages. Families and children remain exposed to water and vector-borne diseases. 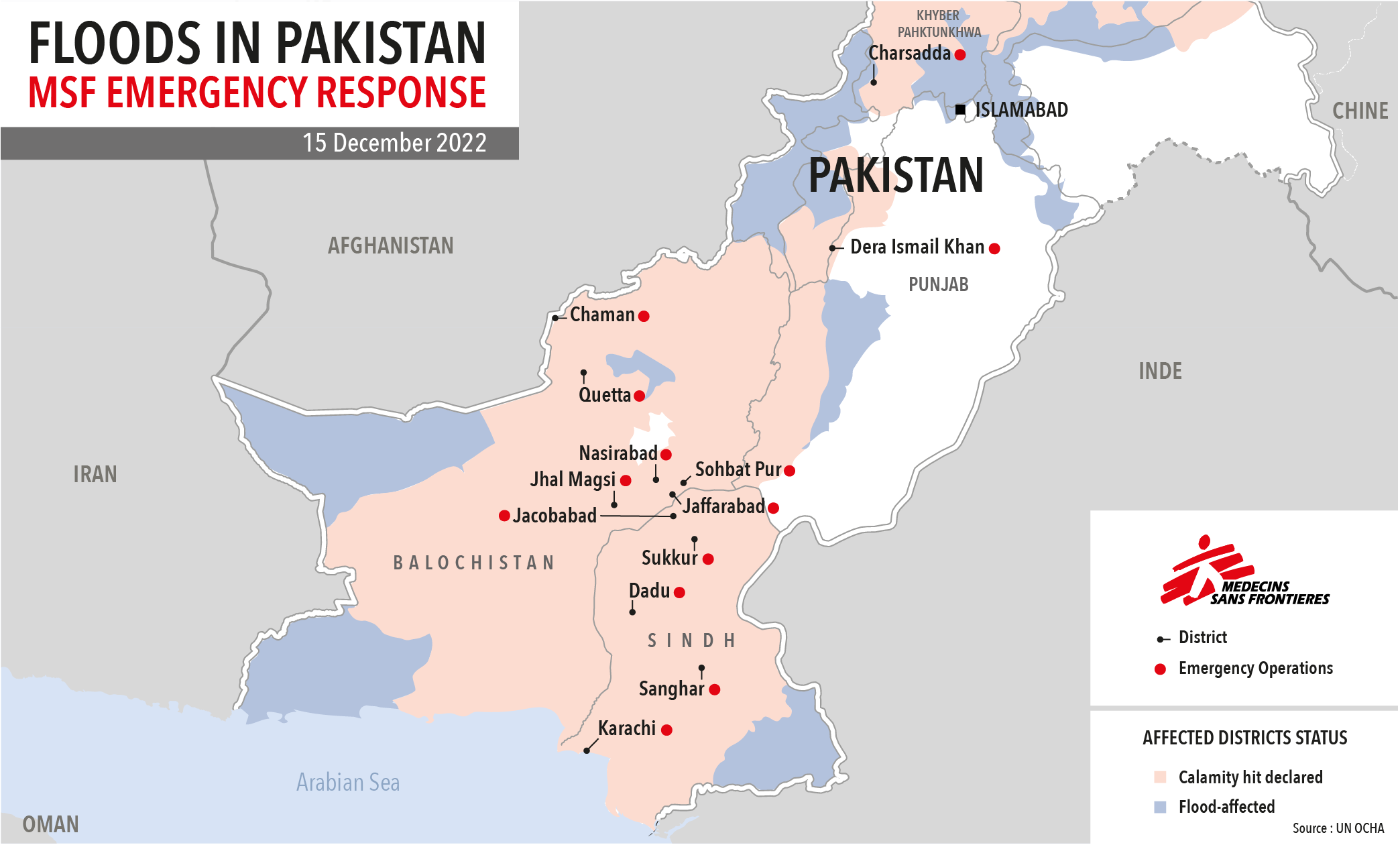 “We are seeing people in these areas still living in tents with limited access to healthcare. With the onset of winter, people are becoming more vulnerable and have nowhere to go,” says Edward Taylor, MSF’s emergency coordinator in Eastern Balochistan and North Sindh. “In the areas where we are working, water has yet to recede and people’s needs remain high. We are still in an emergency phase.”

Gaps in healthcare, and a lack of clean drinking water and basic necessities

In Eastern Balochistan and North Sindh in months of October and November over 50% of the people tested for malaria were positive. The number of cases is worryingly high given the winter period, as we would expect them to drop as the weather cools. 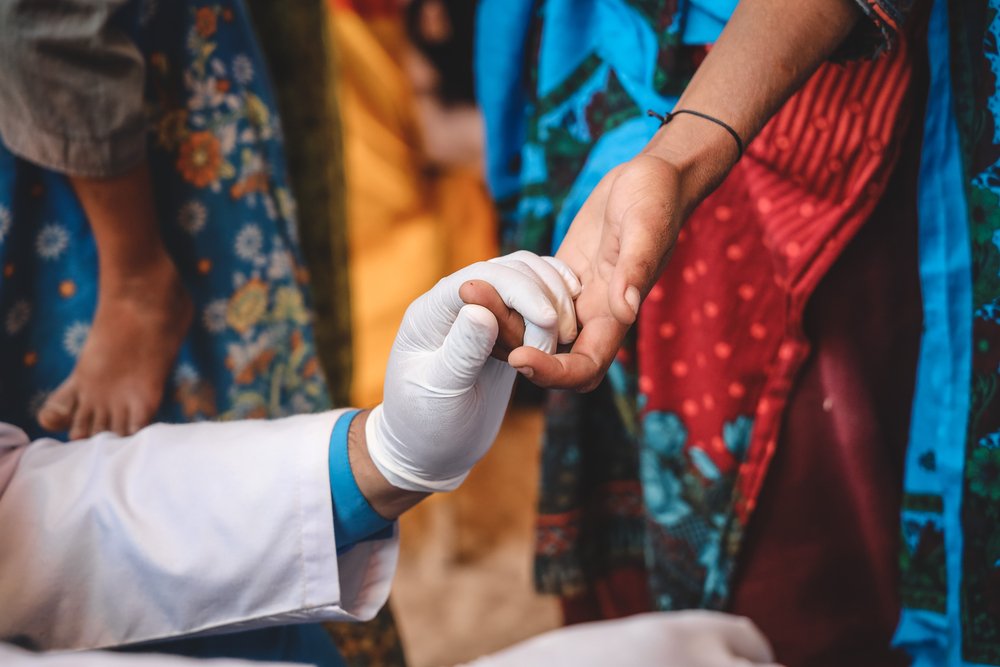 In October and November, our teams tested 38,301 patients, of which 20,361 were positive. We are concerned that with the water not receding in some parts of the affected areas, the malaria season will be longer, resulting in increased demand for testing and treatment. Our teams in Johi town in Dadu district, South Sindh, are also seeing a sharp increase in malaria cases and we have increased the number of malaria health workers in our mobile clinics.

Another major health concern is malnutrition. As many people have lost their livelihoods, farms and animals, there are fewer resources. To make matters worse, in some areas the land will not be ready for the next planting season. 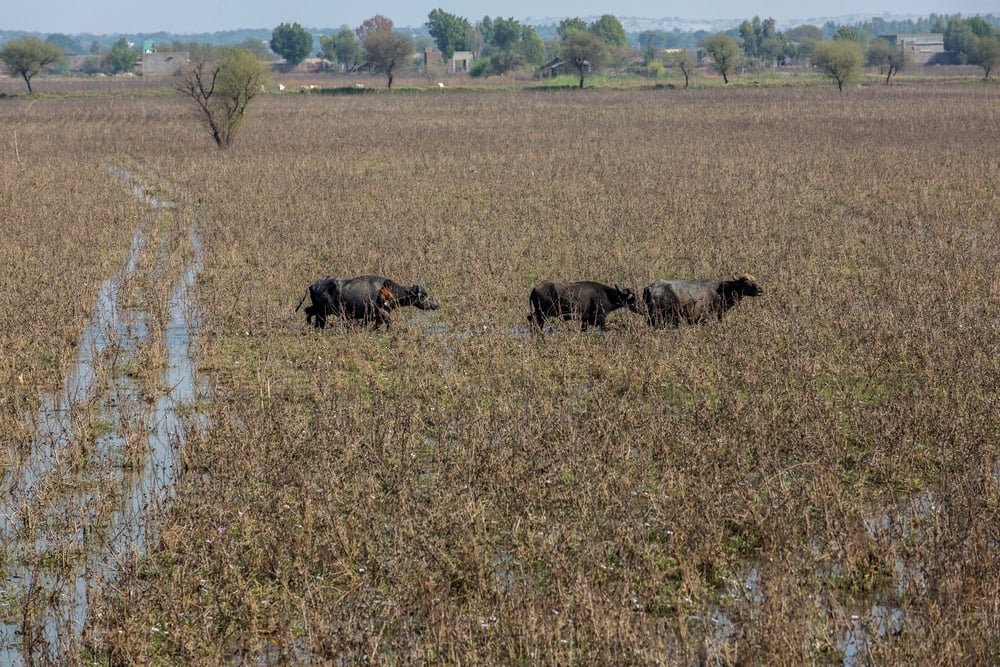 Asim Hafeez for MSF
A boy with his buffalos wades through the stagnant rainwater as he moves inside the damages cotton field at a village near Khipro, Sanghar, Sindh province of Pakistan on 18th November 2022.

“From September to November in Eastern Balochistan and North Sindh, our mobile teams screened 21,777 children under five for malnutrition,” says Juniper Gordon, MSF’s Emergency Medical coordinator. “Of those screened, 5,578 had severe acute malnutrition and 6,812 had moderate acute malnutrition.”

The floods have also caused major damage to infrastructure for clean drinking water in several villages, forcing people to fetch water from far away. The water sources are either contaminated or damaged, which makes it very difficult for communities to access safe water.

“We have been living along the roadside next to our village in Usta Muhammad for more than two months now. The surrounding villages are all flooded,” says *Umer, displaced by the floods in Usta Muhammad district. “With the beginning of winter, it will take several months for our land to completely dry out and for us to return home. Since the floods came, we have had to use contaminated water for drinking and household use,” he says. 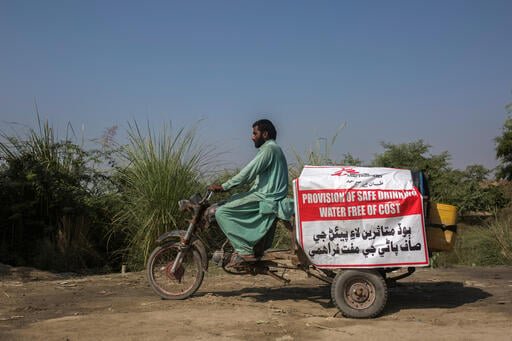 Asim Hafeez
Muhammad Shareef, a water supplier at WATSAN moves after filling his water tanks to supply water in to the flood camps in Garhi Khairo is a Town and Tehsil in Jacobabad District Sindh Province of Pakistan on 28th October 2022.

To address some of the needs in Eastern Balochistan, MSF teams have provided more than six million litres of clean drinking water in five districts. The water is used for drinking and household purposes by the flood-affected communities and helps mitigate the risk of water-borne diseases in the area caused by contaminated water.

MSF’s response to the floods

Our teams are currently responding in three provinces, Balochistan, Sindh and Khyber Pakhtunkhwa. We have 10 mobile medical teams working in Balochistan and Sindh, where we are seeing high numbers of people with malaria, diarrhoea, respiratory tract infections and concerning numbers of people with malnutrition. In all three provinces we are also supporting with water and sanitation, and the distribution of relief packages.

Since 2008, MSF teams have been supporting in DHQ hospital in Dera Murad Jamali in collaboration with the Department of Health. In recent months we have seen an increase in the number of patients. We have increased our support with medical and non-medical experts and increased bed capacity from 49 to 69. Since September, our team has assisted 1,382 deliveries and admitted 1,142 children to the paediatric inpatient department.

We have provided general healthcare to more than 95,940 patients at our mobile clinics and our emergency teams have provided 465 million litres of clean drinking water to flood-affected people in the three provinces.

In order to provide basic support to affected households, our teams have distributed more than 44,800 relief packages, including hygiene kits, kitchen items, shelters and 41,140 mosquito nets.

Humanitarian needs in the region

Many people don’t want to return to their villages, as they’re worried that they will flood again next year. People have instead settled in big camps like Karachi tent city camp in Keamari district, Sindh.

“Health structures have been destroyed and the flooding-related damage makes it harder to move around. We are concerned about access to healthcare, especially for pregnant women.” Says Katrin Kisswani, MSF’s Emergency Coordinator in South Sindh. “The needs we see in our projects lead us to believe that the situation is still very much an emergency, and we are planning our activities accordingly,” says Kisswani.

The impact of the flooding will be felt for a long time. It is vitally important to have continued support across the affected regions to address the many challenges and needs.