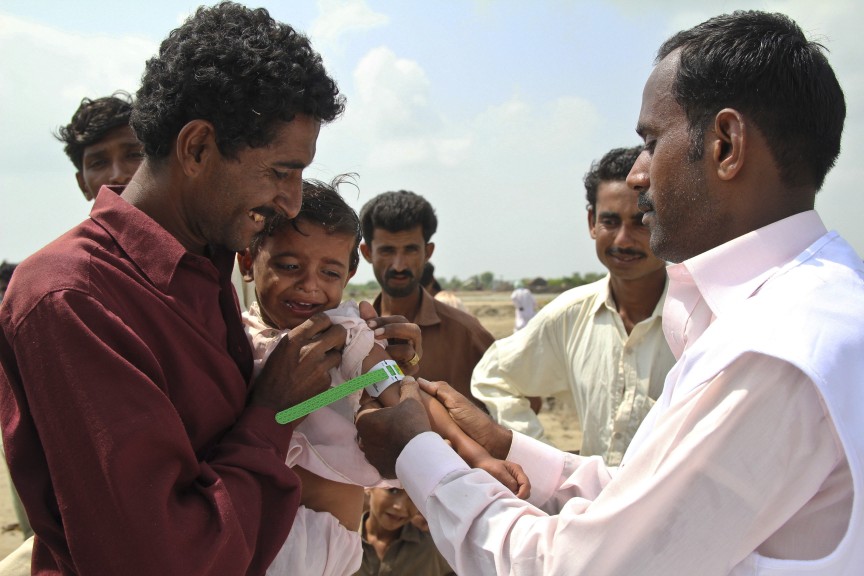 Severe flooding in Pakistan has affected millions of people, with the southeastern province of Sindh particularly badly hit. Weeks of torrential monsoon rains have seen canals bursting their banks and flooding villages, leaving tens of thousands of families homeless for the past two months.

MSF has been providing basic healthcare to displaced families living in camps or in tents on the roadside. Although the rains have finally stopped and the water is starting to recede, thousands of people are still unable to return home. MSF continues to work in the area, providing basic healthcare and monitoring the health of affected communities.

Badin district, in southern Sindh, was one of the worst affected areas. In Tando Bago, an eastern sub-district of Badin, land on both sides of the elevated main roads was still under water two months after the floods first struck.

Sanna* is a mother of two. Like many families in Badin, her house was totally destroyed by the floods. “The most valuable things we have now are the cooking utensils,” she says. She and her family walked until they found a piece of land just high enough to escape the water. It soon became a camp for people displaced from their homes by the floods, with around 200 families from different villages living there.

The displaced people have used whatever materials they can find to build makeshift shelters, including branches, plastic sheeting and leaves. People in the camp have limited access to clean drinking water and food. “Since we arrived here, we have only received two food distributions, of 2 kg flour. I eat just two meals a day – chapatis and nothing else,” Sanna says. Asked where she gets drinking water, Sanna points to a pond of stagnant flood water not far from her tent and says, “This is where we fetch the water from."

Sanna was pregnant when the floods hit her village. Her baby was born ten days ago, in her shelter in the camp, and the unhygienic living conditions mean her newborn son is particularly vulnerable to disease. “He has had diarrhoea since the first day he was born,” says Sanna. “Maybe I will lose my son,” she adds.

Following an independent assessment of health needs, MSF is running mobile clinics in camps for displaced people in Tando Bago sub-district, providing basic healthcare, free of charge, to people like Sanna and her baby. The most common medical conditions are diarrhoea, respiratory tract infections, skin diseases, fever and malaria.

MSF’s team is also supporting staff in providing outpatient consultations at the Tando Bago Tehsil hospital. MSF has provided jerrycans, soap and bed nets to more than 750 displaced families, and has distributed 48,000 litres per day of clean drinking water in villages and camps for displaced people.

The situation has improved since the last week of September. “In Tando Bago, water has started receding and displaced families are going back home, though some remain in camps or living under tents on the roadside,” says Dr Erwin Lloyd Guillergan, MSF’s emergency team field coordinator.

“We will continue our mobile clinics based on the needs in the camps. We will also keep monitoring the health situation, and explore the possibilities of providing safe water in the villages where the displaced people come from over the next few weeks. If there are any immediate, unmet health needs or the risk of diseases breaking out, as an emergency organisation, we will be ready to respond.”

Currently MSF has seven international staff and 23 Pakistani staff working in Badin on the emergency response in the wake of the floods.
* Names have been changed to protect patient anonymity.

Since 1986, MSF has been working in Pakistan with Pakistani communities and Afghan refugees who are victims of armed conflict and natural disasters or who lack access to medical care. MSF teams are currently providing free emergency medical care in Kurram Agency, Khyber Pakhtunkhwa, Baluchistan and Sindh provinces.

MSF relies solely on private financial contributions from individuals around the world and does not accept funding from any government, donor agency or military or politically-affiliated group for its activities in Pakistan.