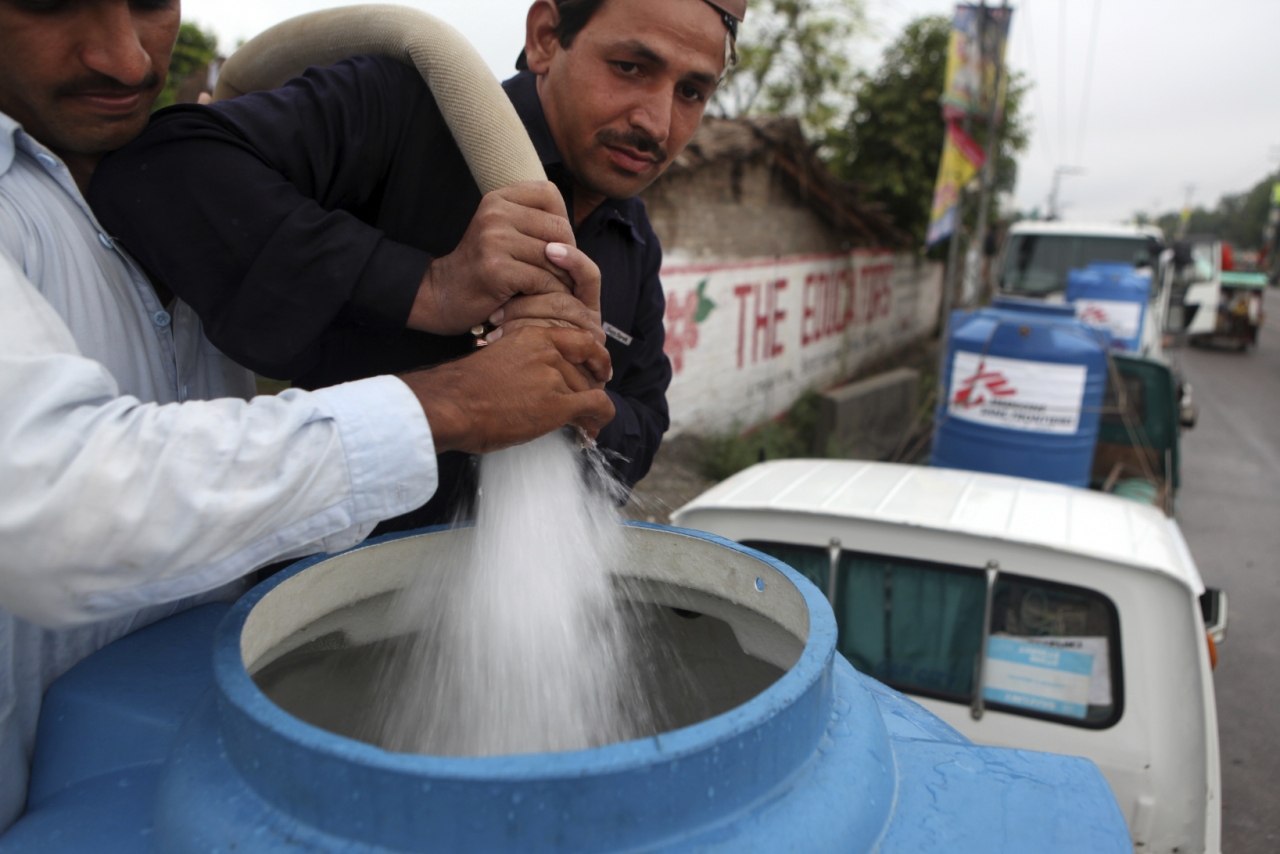 Presently the most severely flood affected areas are in central Sindh Province where the overflowing Manchar Lake has submerged vast areas with a second wave of flooding in recent weeks.

Along the banks of the Indus River, MSF teams still observe large areas of stagnant water, mostly in agricultural heartland of Sindh. Where water levels are slowly receding some displaced people have started moving closer to their places of origin. They have adopted a cautious “wait-and-see” approach. They are still faced with great uncertainty over their future – especially those who are considered to be the poorest of the poor who are tenant farmers with no way to repay debts to their landlords. An MSF psychologist engaged in an assessment in Jamshoro noted high levels of anxiety and depression among people living in the camps.

An MSF medical team has been working from Dadu, near Lake Manchar, as part of preparations to set up a new base in Johi – a town entirely isolated from the world by floodwaters and reachable only by boat.

Basic needs for medical care, clean water and shelter remain high while the number of malnourished children under five treated by MSF is increasing.

In Sukkur a growing number of malnourished children are treated in the Intensive Therapeutic Feeding Centre (ITFC) at the Railway Hospital. There have been 100 new admissions since its inception in late August. There are plans to expand the reach of nutritional programmes through an Ambulatory Therapeutic Feeding Centre (ATFC). Water and sanitation activities have also increased with the amount of water chlorinated and distributed daily now reaching 75,000 litres per day. There has been a general decrease in the number of patients treated for Acute Watery Diarrhoea at the Sukkur Diarrhoea Treatment Centre, which is in line with a decrease in the number of patients treated for diarrhoea in other projects.

In Larkana MSF teams are still providing ITFC and DTC services. Relief item distributions in both Sukkur and Larkana have increased, with a total of 1,709 kits and 668 tents having been distributed so far.

Further south, in Jamshoro, MSF medics have conducted just over 4,000 consultations through mobile clinics in recent weeks, while 6,683 relief item kits have been distributed. Teams are also now running two 20-bed capacity DTCs in Shahbaz camp, Jamshoro, and at the Sehwan Hospital, about 100km to the north. On average MSF water and sanitation teams distribute 300,000 litres of safe drinking water per day in 11 places in Jamshoro.

MSF Emergency Coordinator Rosa Crestani recently returned from an exploratory assessment to the still severely flood-affected Dadu district. Investigating conditions and accompanying an MSF team conducting a helicopter assessment, this is what she saw:

"There are still houses that are totally isolated by the water. Weeks after the initial floods people still have no access to healthcare. Two weeks ago, the Manchar Lake was in danger of bursting, threatening nearby towns. So it was drained – severely affecting some villages which have now become islands. In some villages there are hand pumps and water is available, but we need to check if it’s sufficient and clean. The main access road has been washed away and the only way to bring relief supplies in is by boat. Working with boats is difficult but MSF have done it before."

The knock-on impact of the floods is still felt strongly in Dera Murad Jamali (DMJ) where there is reverse flow of people back towards their homes in Jacobabad and Jafarabad transiting in Dera Allah Yar. Consequently MSF’s water and sanitation services and relief item distributions are being stepped up with efforts shifting towards the Dera Allah Yar area.

MSF teams here are also observing an increased number of malnourished children in our programmes since the onset of the floods.  There have been 130 new admissions to MSF’s mobile therapeutic feeding programmes during week 38, as compared to the 95 admissions in the previous week.

A total of 432 patients still remain under treatment, but MSF medics are expecting the number of treatment defaulters to increase because more people are moving closer to their villages making follow-ups difficult. More than a third a of the 38 young patients suffering from severe acute malnutrition remaining in the ITFC programme, were admitted because they were also suffering from medical complications, making their cases difficult to manage.

Word from the Field:

“As news spreads of the water receding we have seen a substantial influx of people to the camp in Dera Allah Yar. Over a period of three days we saw a nearly 30 percent rise in the camp population, and there are now nearly 1,000 families living there. This is a mix of people who have been resident there since the floods and those transiting, on their way back to what is left of their lands and homes. There are about 800 families living beside the road or close to their submerged land waiting for the water to recede. In Sohbatpur we have distributed 400 relief item kits to families living along a 25km stretch of road. MSF teams are assessing the situation in the camps daily to adjust the provision of clean water to people’s growing needs.”