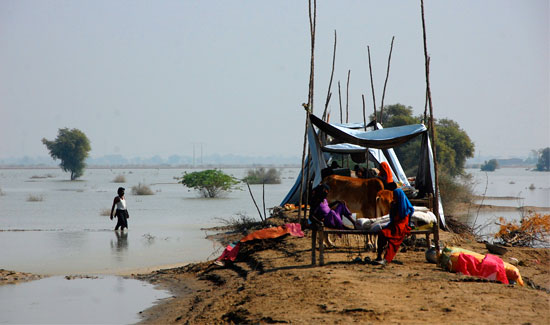 Pakistan: When the water came

It has been six months since devastating floods swept through Pakistan in late July 2010, inundating large swathes of the country and causing destruction on a massive scale. Triggered by torrential rains, the floods washed away crops, submerged and destroyed villages, and caused an estimated 1,700 deaths. Twenty million people were affected by the disaster, losing their homes and livelihoods, across the provinces of Khyber Pakhtunkhwa, Balochistan, Punjab and Sindh. The floods also affected people in the Federally Administered Tribal Areas and Kashmir.

MSF was the first international emergency organisation to respond to the disaster in many flood-hit areas. Along with local organisations, it was able to react immediately to meet the needs of people affected by the floods.

As the disaster unfolded, MSF expanded operational activities, based on its independent assessment of people’s needs, following the path of the worst flooding from Balochistan, to Khyber Pakhtunkhwa, Punjab and finally Sindh. MSF’s emergency effort focused on ensuring that people were able to obtain medical care, free of charge, and had clean water that was safe to drink, so as to prevent possible outbreaks of diseases. MSF also delivered essential supplies to help the victims of the floods maintain a basic standard of living.

At the beginning of the crisis, MSF focused on working where the needs were greatest and reaching as many people as possible. As more aid organisations started up operations in the flood-hit areas, MSF shifted its focus to populations who were harder-to-reach.

In some areas, communities had become geographically cut off by the floods, and reaching them was a logistical challenge. In others areas, people were hard-to-reach due to levels of insecurity, and at times MSF’s efforts were hampered by the compromises made by other aid organisations in accepting armed protection from the police and the military. MSF does not use armed escorts for its staff on principle, nor does it allow weapons inside health facilities where it works.

Six months after the floods, many people have started returning to their homes. Others, however, still lack such basic needs as food and shelter. For this reason, MSF teams in Dera Murad Jamali, in Balochistan, and in Johi and Karachi, in Sindh, are continuing their activities, running nutrition programmes and providing essential items and transitional shelters. MSF plans to carry on working in Pakistan on long term projects throughout the country, while keeping itself in readiness to respond to any future emergency that may happen.