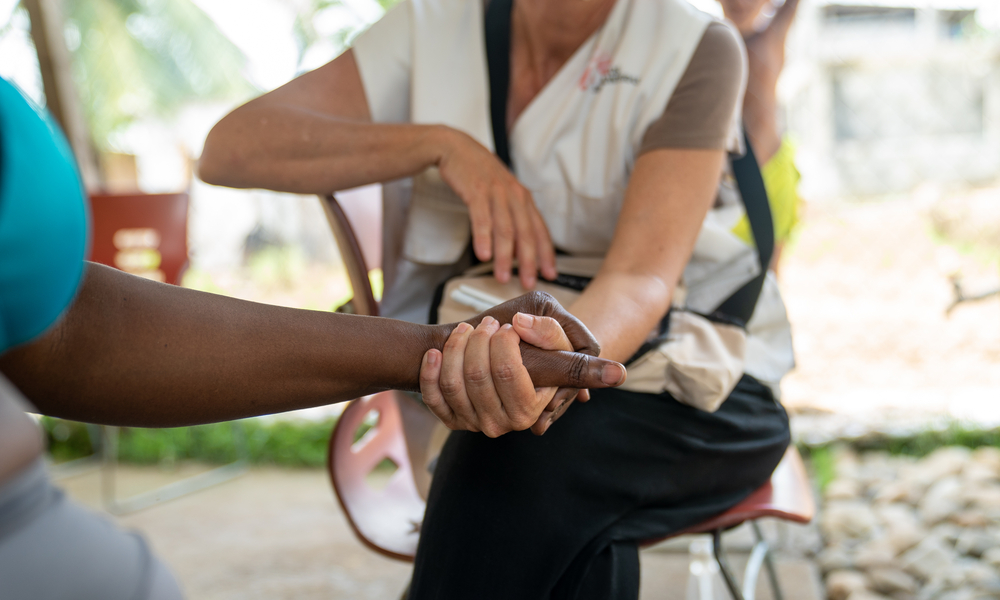 Panama: “There are no nationalities on the Darien journey. They all help each other”

September 14th, 2021- Fabiola Pintado, MSF's medical activities manager, and her team arrived in Panama on 5 April. They immediately began providing medical and psychological services to migrants who had crossed into Panama through the Darien jungle. As her assignment concludes, we ask Fabiola for her thoughts on the situation there.

What is the first thing that you noticed when you arrived in Bajo Chiquito?

Bajo Chiquito is the first village that migrants reach after they've crossed the Darien jungle into Panama.

When we arrived, I was shocked by the conditions that migrants and locals were living in, with tents and rubbish everywhere.

As soon as I arrived, they brought me an eight-day-old boy. He had been born in the jungle and his umbilical cord had been cut with a knife. 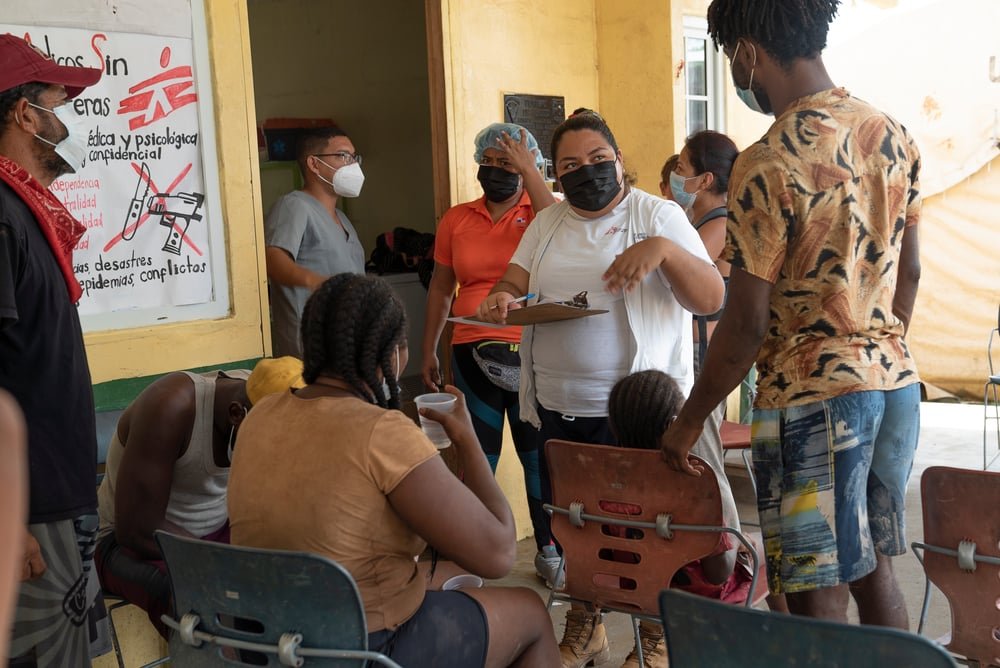 MSF/Sara de la Rubia
MSF staff at the Bajo Chiquito health center. In spite of the extreme danger, in recent months the Darién Gap has become a much-used passage for thousands of migrants of different nationalities.

We had to organise his evacuation to the nearest hospital. In fact, we had to take him in our canoe, as access to and from Bajo Chiquito is only possible for a good part of the year via the Tuquesa river.

I only had a basic first-aid kit because we hadn't started any activities yet. We assessed him, and I did what I could with what I had. 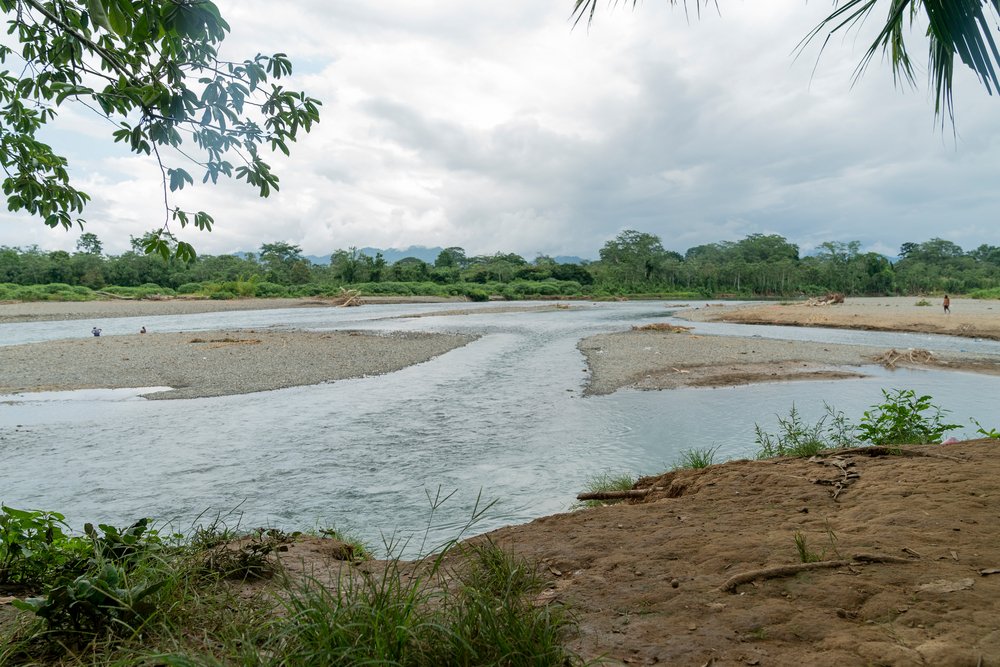 MSF/Sara de la Rubia
The Turquesa River passing through the town of Bajo Chiquito, in the Emberá-Wounaan region of Panama. People arrive here on foot or in canoes.

As a doctor, it was frustrating to see the needs and not be able to do anything at that time.

Later, when we reached the Bajo Chiquito health post, that also had an impact on me because as soon as people saw us, they started running and asking for medical help.

I examined a boy who had oral thrush and when I finished with him, there were five more children waiting... People were crowding round the health post’s fence, showing us their children and their vaccination cards, and that was an overwhelming image.

What was the most difficult part of your assignment?

The most difficult part was seeing people's pain and frustration. Seeing the wounds they arrive with. Seeing those who couldn’t walk. 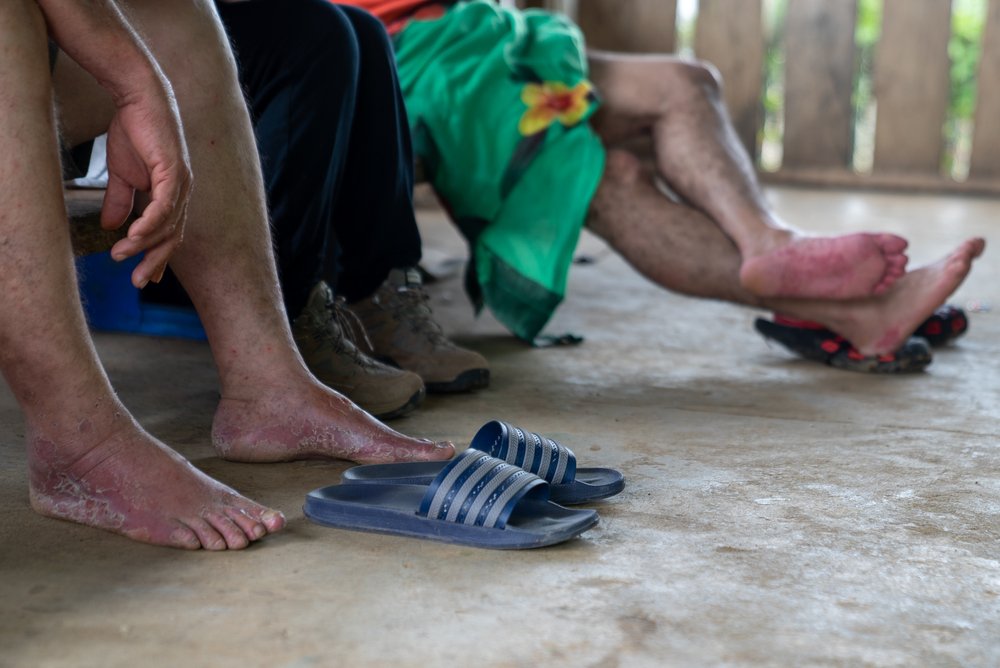 MSF/Sara de la Rubia
One of the most common conditions presented by migrants arriving at Bajo Chiquito, the first town after crossing the Darién, is damage to their feet after days walking in a tropical rainforest.

The people who have had to pay a lot to be able to be there, who have to face so many challenges after crossing the hell of the Darien jungle.

"People should not be forced to travel through the Darien jungle because of the high number of criminal acts, assaults and sexual violence that occur along the way, as well as the Darien jungle itself, which is an extremely dangerous place"

The journey is so hard for them and it depends on the money you have for you to be able to move on.

The xenophobic behaviours you see.

What do the migrants need? Who are the most vulnerable?

What the migrants need most are safe, decent routes from Colombia into Panama.

People should not be forced to travel through the Darien jungle because of the high number of criminal acts, assaults and sexual violence that occur along the way, as well as the Darien jungle itself, which is an extremely dangerous place.

People risk their lives crossing it. 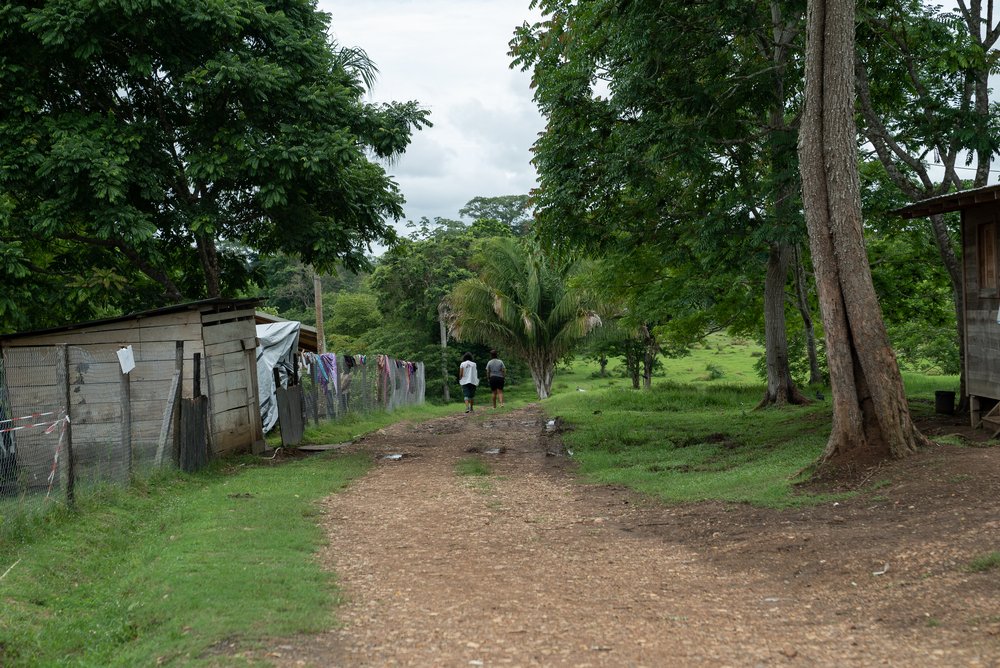 MSF/Sara de la Rubia
Gabi, an MSF psychologist, in a session with a patient at the Lajas Blancas Immigration Reception Station, in Panama.

The most vulnerable people along the route are pregnant women, children and women in general who are at high risk of sexual assaults and rape.

This is what has outraged me the most, that it is so brutal, so systematically violent against women.

Central American migrants used to tell us that there was a risk of sexual violence in Mexico, but here the risk is greatly multiplied, the probability of an attack is extremely high.

What is the most rewarding part?

The most rewarding part is being here now.

Migrants arrive in Bajo Chiquito physically and mentally shattered, and being able to make them smile, offer them a space of safety, to recover and for self-care, is very rewarding. We connect with them and recognise them as people.

Getting a smile from a child, from a woman who arrives in tears, or from a father who arrives frustrated is everything.

What health problems are you seeing now that the rainy season has arrived?

Many migrants have wounds caused by the journey including fungal infections, friction from clothing against the skin and friction burns.

They have gastrointestinal diseases and diarrhoea, caused by the dirty river they have to drink, as well as upper respiratory tract infections and skin diseases.

We also see physical injuries that are the result of the traitorous paths they must walk. 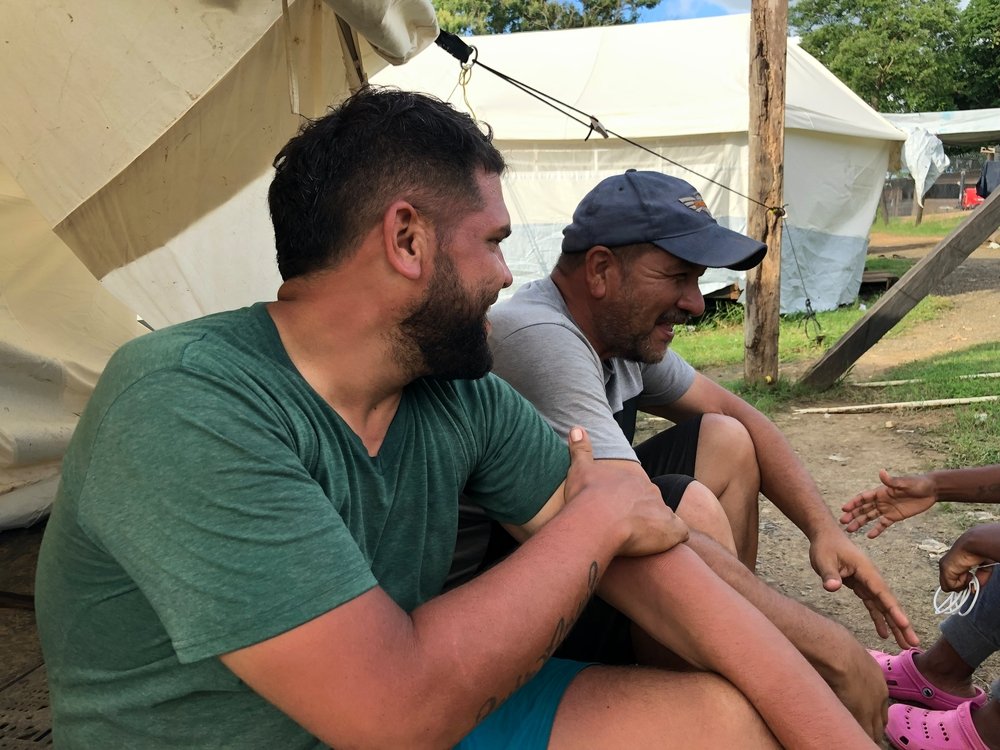 MSF/Sara de la Rubia
Alejandro and Manuel at the Lajas Blancas Immigration Reception Station, in Panama. They met during the route through the Darien jungle.

Others arrive with damaged feet. In the rainy season, foot injuries are much worse. I've never seen feet like this.

It is amazing that people can continue walking with feet like that, and it can only be explained because their need to reach Panama is so great.

It is the only thing that keeps them going, and able to take steps with feet like that.

Their intention is to continue the journey, which shows you their prevailing need to leave.

Depending on the severity of their swollen feet, such injuries may take from two or three days up to a month to heal, longer if there is an infection.

They need to rest and the conditions don’t allow them to rest properly.

How is sexual violence detected?

We have two ways of identifying someone who has experienced sexual violence. The person arrives and says directly, "I have been raped" or “I have been assaulted”.

The other is during the consultation when we ask them if something happened to them during the journey, if someone did something to them. And with that, you only have to see their faces.

We ask the men and most of them say that nothing has happened to them, but they know someone who it has happened to, and they bring women to us who have experienced sexual violence.

This also shows you the human warmth of these people, who end up becoming a family during the journey; how they help and worry about each other.

How do they help each other along the journey?

Listen, I'll tell you something that a Cuban woman said to me, "We used to think that Haitians were uneducated people with a different belief system, but they were the ones who helped us the most along the journey."

There are no nationalities on the journey. They all help each other. Even if there was only a little bit of broth, a spoonful for each person, they still shared it.

When they tell you this every day in Panama, your heart breaks, it's incredible. Seeing this solidarity among people helps restore my faith in humanity.

Why do you need to have a mental health team here?

Migrants go through very traumatic experiences on their journey through the Darien jungle.

They need our support to help give meaning to what happened to them, and I'm not just talking about sexual assaults.

They have been robbed and have seen people be killed. 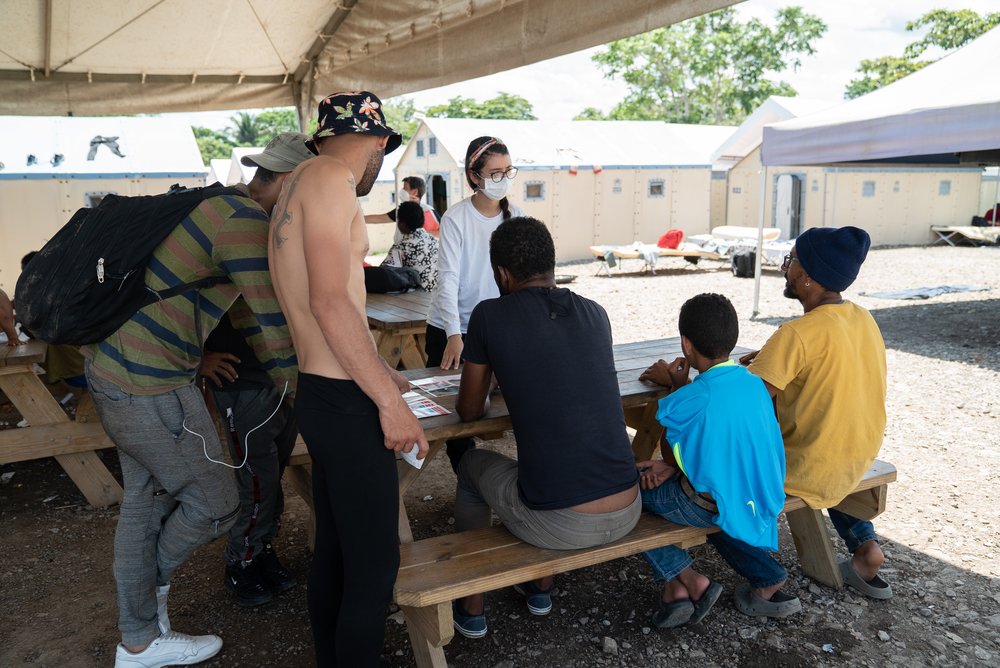 MSF/Sara de la Rubia
Paloma, an MSF psychologist, talks to a group of migrants at the San Vicente Migration Reception Station, in Panama.

They have been psychologically tortured to be relinquished of their belongings, they have seen corpses along the journey and the sight and smell of this stays with them.

There was one man who said, "I couldn't stop smelling death".

Without the mental health support that we offer, it would be very difficult for them to understand that what they're feeling is an understandable consequence of their experiences.

It would be difficult for them to continue along their journey, for them to survive and learn to live with this.

Who do you remember the most?

A Haitian girl called Nancy who had been raped and was also looking after two children who were not her own.

She found them lost in the Darien jungle and decided to stay in Bajo Chiquito, hoping to reunite the children with their family.

She stayed a whole week, even though she had the option of leaving here earlier and continuing her journey. 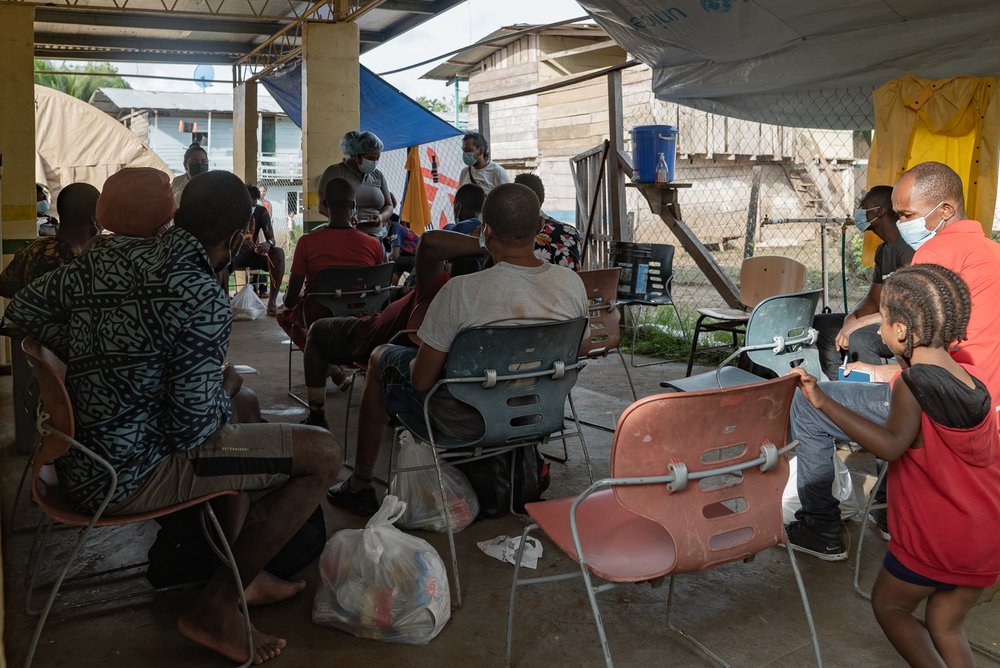 MSF/Sara de la Rubia
Waiting room of the medical post where MSF staff provides assistance to migrants and the Bajo Chiquito population, in partnership with the Ministry of Health.

She brought other women to us who had also been raped and spent every day at the health post to see whether she could help with interpreting from French into Spanish. She had an enormous heart.

She looked for places where other people could sleep or eat. She is my hero.

MSF demands that the governments of Colombia and Panama find alternative routes for migrants that guarantee safe passage between the two countries and deploy the necessary protection mechanisms in their territories to prevent more deaths and suffering on the route through the Darien jungle.