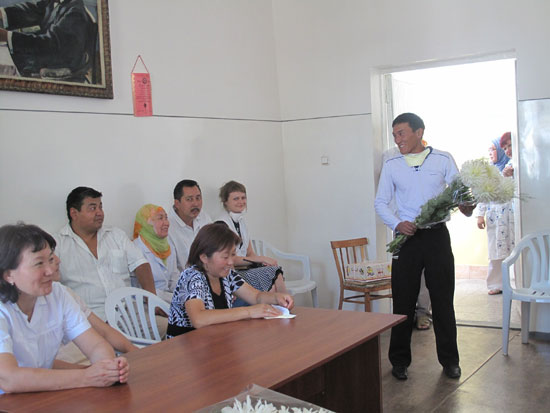 Ruslan is returning to prison to visit his fellow inmates, but this time he is a free man. He has gone back to Colony No. 31, a special penal colony for prisoners suffering from tuberculosis (TB), to celebrate with his doctors the completion of his long, arduous and painful treatment for multidrug-resistant TB (MDR-TB).

“It was like a nightmare, you can’t imagine how difficult it was to take those drugs,” explains Ruslan. “You want to sleep but you can’t, you feel dizzy, you feel nauseous…you vomit, but you don’t feel any better. I took the drugs even though I felt awful, but my former cell-mate couldn’t keep going, for him the side-effects were too much.”

Every year 120,000 people die from MDR-TB, while nearly half a million new cases are identified. The number of patients suffering from TB caused by drug resistant strains is growing; the World Health Organization estimates two million cases worldwide. Most patients contract MDR-TB because they are not treated properly, but for a growing number of people, their first TB infection is with a resistant strain of the disease.

Treatment for MDR-TB is costly and complex. The duration of treatment is long (up to two years) with severe side-effects and a cure cannot be guaranteed. Side-effects range from the unpleasant to the unbearable and even dangerous. Several TB medicines have terrible gastric effects, trigger nausea, and can cause the kidneys and liver to malfunction. To counter such side-effects, the only solution is to add more tablets to the already extremely high daily pill count.

MSF has been running a TB treatment project in Kyrgyzstan since 2006 in collaboration with ICRC, working in two sites: a detention centre Colony No. 31 (situated on the outskirts of Kyrgyzstan’s capital) and a pre-detention centre SIZO No. 1.

One of the big challenges of a disease such as TB is maintaining continuity of treatment, because if treatment is interrupted the risk is that drug resistance could develop.

One in three prisoners with tuberculosis is released before the completion of treatment and then face enormous obstacles once outside the penal system. Since they struggle, mostly unsupported, with drug addiction and for the bare necessities of life, many ex-prisoners do not see their treatment as a high priority. Some may not even have the money to reach the nearest TB facility. If they do reach it, they may not be accepted because they don’t have the proper documents or because medical staff are unwilling to treat ‘ex-prisoners’.

“I was released in May 2008, right in the middle of my treatment,” says Ruslan. “While I was in the colony the social workers explained to me how I could continue treatment in the civilian sector. But when I got to the hospital, the doctors looked at me with suspicion. ‘Ex-prisoner…criminal’ they said. But after a while, because of my good behaviour, their attitude towards me changed.”

Umutai Dauletova, MSF’s social support coordinator affirms that it can be difficult for ex-prisoners who have TB to be admitted to public hospitals. “Our patients face the double stigma of not only having TB but also having been in prison. In addition, they may be homeless, unemployed, be dependent on alcohol or drugs and be without identity papers.”

Today, about 70 former patients are being supported by a team of MSF social workers and a network of volunteers to complete their TB treatment. Support includes: counselling, information and education, food parcels and money for transport.

“We are trying to implement a case management system now,” says Umutai. “It’s a community approach, where volunteers help patients adhere to their treatment.”

Ruslan works as a volunteer case manager and offers support to some TB patients who are on treatment in the hospital near where he lives. “With the help of the MSF social team I try to cope with my responsibilities as a case manger. My message to the people I support is patience, patience, patience and don’t lose hope!”

Over the three years from 2006–2009 MSF has supported 2,270 TB cases, including 200 MDR-TB cases in Colony No. 31 and Sizo No. 1. MSF’s TB project includes the provision of training, drugs, the equipping of laboratories and the rehabilitation of the prison hospitals and living quarters for TB patients.

MSF has overseen the introduction of internationally adapted treatment protocols in the penal system and has assisted the Justice Department and the Ministry of Health to improve the medical care of TB patients in prison. In 2007, an MSF office of ‘social support’ was opened in Osh, the largest city in the south of Kyrgyzstan, to help former inmates to continue their treatment.

To highlight the fact that the fight against TB, especially in prison, is not only a medical issue but also a human rights issue, MSF organised two photo exhibitions in Bishkek in order to raise awareness of the plight of prisoners and ex-prisoners with TB. The exhibitions entitled: ‘Behind the bars and TB’ and ‘In and out – leaving prison with tuberculosis’ were the work of the Ukrainian photographer Alexander Glyadyelov.